On Tuesday, the biggest automaker in the world announced it would invest $13.5 billion in battery technology over the next eight years.

“[Toyota], which pioneered hybrid gasoline-electric vehicles with the popular Prius, is moving rapidly to deliver its first all-electric line-up next year,” says an article at Reuters.

“Considered a leader in developing batteries for electric vehicles, Toyota said it aimed to slash the cost of its batteries by 30% or more by working on the materials used and the way the cells are structured.”

According to Motor Trend: “[Toyota] has a long-standing policy of keeping battery development and production in-house… and its solid-state battery tech is no exception.” 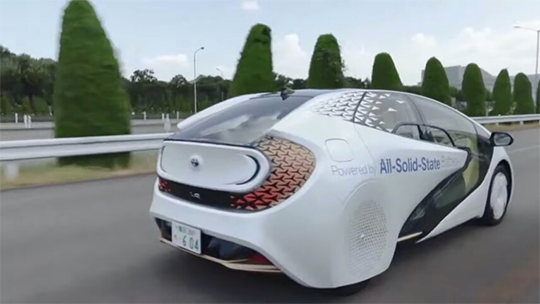 “The two differ in that a lithium-ion battery contains a liquid electrolyte while a solid-state battery — as its name suggests — features a solid one.

Reuters reports: “Toyota’s target [is] to begin manufacturing solid-state batteries by the mid-2020s.”

“We are still searching for the best materials to use,” admits Toyota’s Chief Technology Officer Masahiko Maeda. Albeit, the company’s still considered the “front-runner to mass-produce solid-state batteries.”

Not an easy task, J.D. Power concludes: “For all its benefits, scaling up production to the level needed for usage in EVs remains an expensive endeavor.” Add to that, solid-state batteries “are prone to crack when they expand and contract during use,” Reuters says.

But regardless of manufacturing and design issues, Motor Trend forecasts: “The global market for next-generation batteries (those that perform better than existing lithium-ion batteries) is expected to grow from $39 million this year to $413 million in 2025, $3.1 billion in 2030 and $25.2 billion in 2035.” (Emphasis ours.)

“Typically, I’m skeptical of claims for a ‘better than lithium’ battery,” Ray says. “The difference is…

“One mysterious metal is an already proven technology,” he says. “Specifically, one company uses this mysterious metal to manufacture batteries, already inking commercial deals in New Mexico, Colorado and Texas.

“As the battery revolution unfolds over the coming years,” Ray says, “this metal — and the company behind it — could very well snap up massive chunks of lithium’s 90% market share…

“And you can get all the details in my new research report.”

“Is this just a bump along the road to breaking out of that wide range and posting new highs?” he wonders. “Or is this a sign that more chop is on the way?

“We’ll have to see,” Greg says. “Either way, iShares Russell 2000 ETF (IWM) is a chart I’ll be watching carefully as it’s stuck in a huge sideways range.”

“Uranium, the commodity used to fuel nuclear power plants, has surged to the highest level since 2014,” Bloomberg reports. This is partly because investment firm Sprott Inc. has been “aggressively” moving to corner the uranium market.

“Earlier this year [Sprott] launched its Physical Uranium Trust and recently commented on Twitter about how much physical uranium it had been buying, aiding the commodity’s recent bull run.” 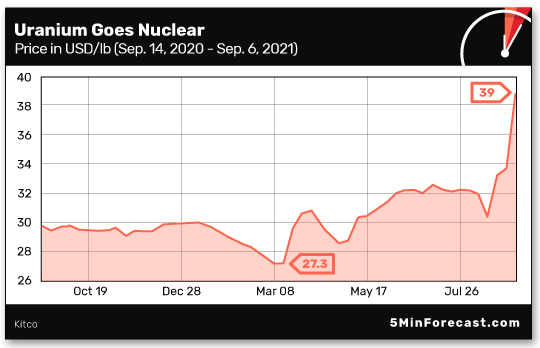 Bloomberg says: “Sprott has amassed over 24 million pounds of uranium, sometimes buying more than 500,000 pounds in a single day, according to its website and social media account.

“The buying is in addition to already bullish fundamentals,” the article continues.

“Power plant fuels — including natural gas and coal — are surging to new heights, making it more expensive to operate factories and keep the lights on at home, and compounding inflationary pressure already resulting from strained supply chains.”

Yet another supply chain snafu…

“The rally has benefited Cameco Corp., one of the world’s largest suppliers of uranium, which has seen its stock price rise to the highest level since 2014,” Bloomberg says. “Australian uranium shares, such as Paladin Energy Ltd. and Toro Energy Ltd., have also jumped.”

Well, not today they haven’t. (But generally speaking, the energy sector benefits from inflation.)

“Twenty-two states took out what are referred to as Title XII advances during 2020,” says Route Fifty. “The loans were initially interest free, but starting Monday, [ten] states with outstanding loans began to accrue 2.3% interest on the borrowed sums.”

Which is unfortunate for the states including California, Colorado, Connecticut, Illinois, Massachusetts, Minnesota, New Jersey, New York, Pennsylvania and Texas.

And business owners in those states might be on the hook, with higher unemployment insurance taxes levied against them — something The 5 reported in June this year.

New Jersey has already announced a $250 million hike in unemployment insurance contributions… which Garden State businesses will have to pay.

In mid-August, “the Department of Labor and Workforce Development… posted a notice to employers about the change in their contribution rates,” says NJ.com. Higher quarterly UI tax rates are expected to kick in on Oct. 1 (not that New Jersey’s DLWD is terribly explicit about what those rates might be).

One saving grace (we suppose)? Gov. Phil Murphy signed legislation to phase in the UI tax hikes over the next three years to cover the unemployment fund’s shortfall.

“At the end of the day, this is a large tax not on income, profits or assets, but on actual jobs as employers desperately look to recover employees,” says Bob Considine, spokesman for the New Jersey Business and Industry Association.

That’s how states including Hawaii, Ohio, West Virginia and Nevada paid back their federal unemployment loans… with federal money.

And Ray’s keeping an eye on three such companies that have produced promising therapeutic results. (Out of respect for his paying subscribers, we’ll keep the names under wraps.) What we can tell you is…

“COVID-19 vaccine news remains a headline-maker,” Ray concludes. “But this summer’s increase in cases strongly suggests that we may have to live with the virus for a good, long time.” Investing accordingly makes sense…

Drink Wisconsinably? As the pandemic wears on, a new report from the nonpartisan Wisconsin Policy Forum shows alcohol consumption is up notably in the Badger States.

“Revenue from state excise taxes on alcohol during the fiscal year that ended June 30 totaled $73.8 million, up almost 17% from $63.3 million the previous year, according to preliminary data from the state Department of Revenue,” says The Associated Press.

“The increase would be the biggest percentage increase the state has seen since 1972.”

Itself a bad year, no? When the Watergate scandal was coming to light and men’s fashion was at an all-time low… 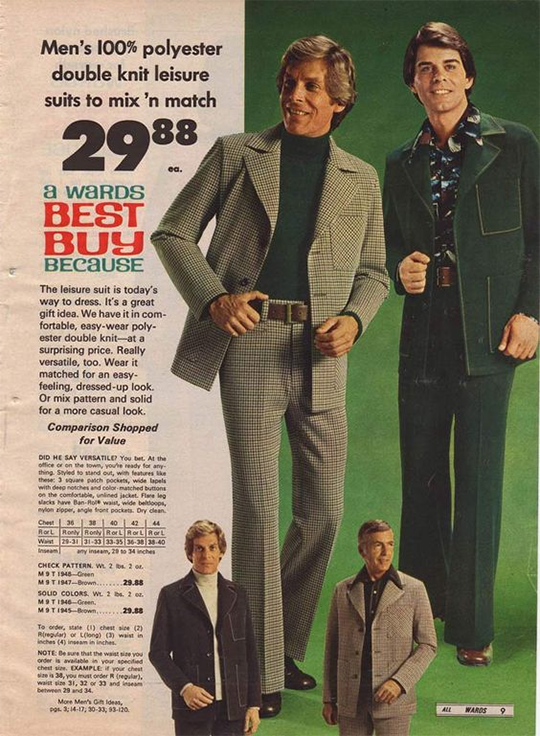 “Most states have seen a bump in alcohol tax revenues during fiscal year 2021,” the AP says.

Indeed… According to a Columbia University study, U.S. beer, wine and liquor sales reached almost $42 billion for the months March through September 2020. Or 20% higher than the year before.

The AP concedes: “Increased alcohol consumption is ‘perhaps unsurprising’ given rising stress over personal health, job losses, school challenges and a lack of leisure activities during the pandemic.”

On that note, take care of yourself, reader.

And check out tomorrow’s 5 (it should hit your inbox around 8 am EST). Dave’s teed up a special single-topic issue with a uniquely 5-ish commemoration of the 9/11 attacks.

You don’t want to miss it…

P.S. While Wall Street is focused on Tesla’s…

They’re missing the BIGGER story… Tesla is quietly working on a disruptive, game-changing technology project that’s part of a new ground-floor opportunity that (Bloomberg says) will grow an exponential 12,100% over the coming years.

What exactly is Tesla working on now? Go here now to get the full details on this fast-moving disruption story… Plus, Ray Blanco’s No. 1 “disruptor stock” pick. No sign-up required!