“Batteries are getting a silicon makeover that could reshape the way we approach electricity and energy consumption,” says the Morning Brew website.

“Batteries power much of the technology we use today. And as battery-based fuel and energy sources like solar panels, electric vehicles and wind turbines become even more prevalent, more efficient and powerful batteries will be essential.”

So last week, “California startup Sila Nanotechnologies, which has raised over $880 million since its founding in 2011, unveiled a battery it claims is more powerful than existing batteries, without compromising on life cycle and safety.

“Sila makes its batteries from next-gen ‘silicon anode material,’ which replaces the graphite in the lithium-ion batteries used in most technology today.”

Which allows for the storage of more lithium atoms in the battery, ultimately “increasing efficiency.”

As for the compact battery’s first real-world application, it will be an integral component in Boston startup Whoop’s 4.0 wearable fitness technology, which has a “host of activity-tracking features, from sleep patterns to heart rates and skin-temperature sensors,” Morning Brew says. 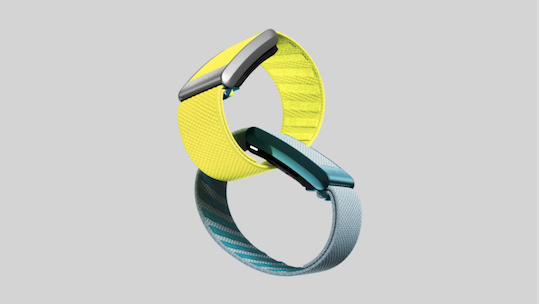 “The new Whoop, which the company has dubbed Whoop 4.0, is the first consumer product on the market to ship with a new kind of super-charged silicon lithium battery,” says an article at Wired.

And the fitness tracker (plus battery) doesn’t only have to be worn on the wrist; instead, the Whoop 4.0 can be paired with the company’s athletic gear and subscription app for continuous fitness monitoring.

But back to Sila’s battery technology…

“The tiny battery will deliver 20% more power density… meaning it can be up to 33% smaller while achieving the same five-day battery life.

“Big picture: Sila’s partnership with Whoop is an effort to start out small before transitioning into bigger applications like smartphones, electric vehicles and renewable energy,” says Morning Brew.

“Sila expects its batteries to make their way into cars by 2025, which it hopes can lower the price of electric vehicles and extend their range.”

Just another salvo in the battery revolution…

“If you were waiting for a warning bell to alarm you that a great transition from fossil fuels to renewable energy is here,” says our science and technology maven Ray Blanco, “this is your wakeup call.

“Battery storage is a radically disruptive, category-killing technology,” he says. “It’s taking the country by storm, and it’ll change the way we generate power forever.

“As a result, I predict it will mint a whole new class of ‘battery millionaires,’” says Ray. “There’s just one tiny detail, however, that will separate those who stand to make decent profits… from those who could pocket life-changing wealth from this disruptive megatrend.”

Two weeks after The 5 mentioned Evergrande Group’s potential debt default, the story is spiraling out of Beijing’s control as Chinese protesters take the streets. 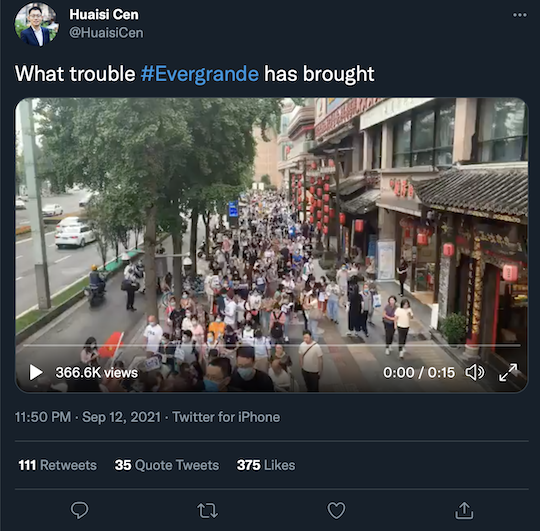 While Beijing remains mum on the topic of a government bailout (unlikely, by most estimates), Bloomberg reports: “The Ministry of Housing and Urban-Rural Development told banks in a meeting this week that Evergrande won’t be able to pay its debt obligations due on Sept. 20.

“Evergrande’s failure to meet its obligations on time has led to protests across China by homebuyers, retail investors and even the developer’s own staff, raising the prospect of social unrest if the property giant’s troubles spin out of control.”

For the economic number of the day, the Federal Reserve reports industrial production was up 0.4% in August from the month before — slightly less than the 0.5% economists forecast. Hurricane Ida tamped down production, perhaps by as much as 0.3%.

But the headline at financial media outlets: Industrial production hit pre-pandemic levels. So assuming April 2020 marked the bottom, the recovery took “only” 16 months.

“It’s a slow news day, and the financial outlets are scrambling to create some headlines,” says our market analyst Greg Geunthner. “Of course, the main theme is the possibility of a correction.

“Here’s the kicker from CNBC: ‘After eight months of straight gains, strategists say a major pullback could be imminent.’

“A choppy summer and the slow bleed we’ve experienced so far this month have most investors worried about more downside action,” Greg says.

He continues: “This industry was left for dead after the Fukushima disaster in 2011. The immediate shutdown of over 50 Japanese reactors resulted in a supply glut and a 10-year bear market.”

Which brings us to last week, when we reported uranium’s price had rocketed — in part, because investment firm Sprott Inc. made an aggressive move to corner the uranium market with the launch of its Sprott Physical Uranium Trust (SPUT).

“[SPUT] is designed so that its performance will closely track movements in the spot uranium price,” Mr. Huhn notes. “[It] provides investors with an indirect way to invest in physical uranium without being exposed to the operational risks associated with companies that engage in the exploration, development and mining of uranium.”

And without reservation, Huhn says he’s “unabashedly bullish on SPUT.

“To put [that] into context, one needs to understand that each 1-gigawatt nuclear reactor consumes about 450,000 lbs. of U3O8 per year,” he explains, “so SPUT already accounts for a full year’s necessary supply of U3O8 for over 13 reactors!

“Moreover, at the current rate Sprott is adding pounds, they would account for a full year of consumption for 66 operating reactors by year-end 2021! These numbers are truly staggering,” says Huhn.

More perspective? The U.S. — with the largest number of operating reactors of any country — has 94. Worldwide? There are 453 operational reactors. “These numbers are truly staggering,” says Huhn.

“Sprott is now… pursuing a NYSE listing for SPUT, which will only bring in more sponsorship for this vehicle,” he says. “Sprott has made it clear that higher uranium prices are their objective because that is the clearest path to growth.”

Mr. Huhn and his team were already bullish on uranium in the early days of 2020, but now with…

[If you want the inside story on this much sought-after commodity, look no further than Uranium Insider Pro… which has delivered nearly 365% net returns on recommendations since the newsletter’s launch on Aug. 1, 2019. See for yourself right here.]

More alarming news from the largest public pension fund in the U.S….

California’s $470 billion CalPERS — for the benefit of the state’s government employees — has been without a CIO for more than a year now after former CIO Ben Meng’s investment acumen missed the mark. Namely, under Meng’s management, CalPERS’ investments earned just 4.7%, well shy of its 7% target.

[Apropos of nothing, we found this nugget on Mr. Meng’s CV: He was a risk manager. At Lehman Bros. Oy.]

If the absence of a competent CIO isn’t alarming enough, according to CalPERS 2020 annual report, the fund invested $3 billion in Chinese companies — including businesses heavily involved in China’s neo-Silk Road venture.

For years, The 5’s mentioned the Belt and Road Initiative which encompasses no fewer than 65 countries in a network of highways, high-speed railroads, airports, bridges, tunnels, ports, dams, fiber-optic lines… linking Beijing to Berlin, Shanghai to Rotterdam, Shenzhen to Lisbon.

The Washington Free Beacon reports: “CalPERS had more than $450 million invested in 14 Chinese companies the Trump administration put on an investment blacklist last year.” An executive order that hasn’t been lifted by the Biden administration…

Included among those companies: “CalPERS had… $6 million invested in China Communications Construction Co., a state-owned company that U.S. officials have said is building military installations in the South China Sea in violation of agreements that China has with its neighbors.” Added bonus? CCCC has direct ties to Belt and Road.

So the biggest U.S. pension fund… in the world’s fifth-largest economy (California)… hamstrung by incompetent (or worse) management… Nothing to see here!

The demand for second-home ownership has skyrocketed in 2021. In fact, Redfin reports: “The number of buyers who locked in mortgage rates for second homes shot up a record 128% year over year in March.”

So in the spirit of much-hyped “sharing” companies including Uber, Airbnb and WeWork, wannabe vacation homeowners are turning to startup Pacaso.

Co-founded by two former Zillow execs, the home-sharing company launched last year in October. (Its founders claim Pacaso is the fastest-growing unicorn ever.)

And to be clear, this ain’t your mother’s timeshare — or so the company wants us to believe…

“Shares are sold as part of a limited liability company,” the article says. “A 12% service fee is charged at the time of purchase, and buyers pay a management fee of $99 per month that is permanently fixed…

“Each Pacaso (pronounced ‘Picasso’ in homage to the artist) home has only eight shares, and prices per share typically run $250,000–1 million.”

Owners are each allotted 44 overnight stays per year, and vacations — not exceeding 14 straight days — are scheduled via Pacaso’s app.

But one Sonoma Valley neighborhood is in an uproar about a Pacaso home located in a residential cul-de-sac, and listed for sale on the company’s website under the moniker Chardonnay.

Neighbors argue if local ordinances ban timeshares and Airbnbs, how is Pacaso any different? Pacaso’s Ellen Haberle counters: “Unlike a timeshare model, the co-owners that Pacaso serves collectively own real estate, not time.”

Unconvinced, “[neighbors] formed an organization called Sonomans Together Opposing Pacaso, which, not coincidentally, has the acronym STOP,” says NPR. (Duh.)

Like all good grassroots organizations, STOP has reached out to local officials, written strongly worded letters to editors and festooned their neighborhood with anti-Pacaso signage. 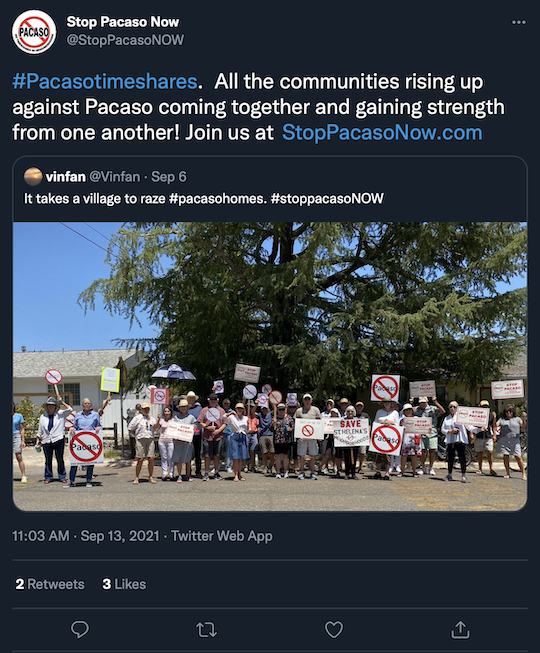 The signage was something Chardonnay’s one-eighth part owner Alfred Miller didn’t expect. “So imagine me as a new owner driving up,” he says. “There’s a full-on, professionally printed sign that says ‘No Pacaso.’

“I mean, it was not what I would call very welcoming,” he harrumphs.

Take care… We’ll be back with more of The 5 tomorrow.