OK, so maybe it was a bit premature to say there would be no “taper tantrum.”

The Wall Street Journal channels the mainstream line as well as anyone: With the Federal Reserve moving forward on plans to “taper” its bond purchases come November… “rising bond yields deepened a rout in shares of technology companies.”

The yield on a 10-year Treasury note leaped to 1.53% yesterday — the highest in three months. Thus, the Nasdaq touched a six-week low.

Too many stories in Establishment financial media gloss over this connection between rising rates and falling tech stocks. They take it for granted, with no explanation.

So we pause a moment to revisit our income specialist Zach Scheidt’s explanation that we shared during a similar occurrence earlier this year.

Two issues are in play. “First, most small tech stocks will continue to need extra capital to fund growth opportunities,” he explained. “And with higher interest rates, any future borrowing will naturally make this capital more expensive.

“So some investors are selling shares because they realize interest costs will be higher in the future.”

“There’s a popular model for figuring out what a stock is worth called the ‘discounted cash flow’ model.

“That’s because it would take a lot more cash making just 0.5% or 1% to equal the profits you can expect to receive from a speculative company throughout its lifespan.

“But when interest rates move higher, the future profits become worth less in today’s dollars. That’s because if you took an equivalent number of dollars and invested in Treasuries yielding 2% or more, that money would grow more quickly. So you wouldn’t need as much money to start with to equal the same value of the future profits from a tech company.”

Bottom line: If interest rates keep rising, “big professional traders are more likely to bail out on high-priced growth stocks,” says Zach — “especially those with little or no earnings.”

We caution that’s a big if. Opinions differ among our resident experts on that question. Behold a chart of the 10-year Treasury yield so far during 2021. 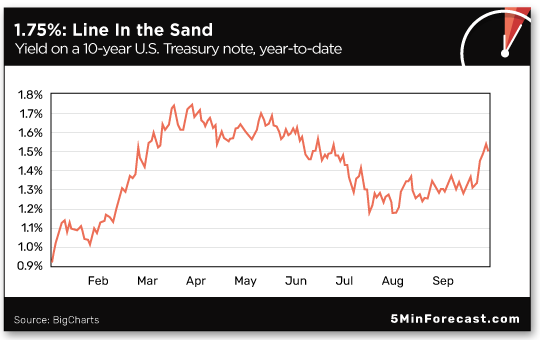 You can see two clear peaks in late March near the nice round number of 1.75%. That marked a high (so far) for the pandemic era of pedal-to-the-metal Fed money printing.

If the 10-year moves beyond 1.75% and stays there… yes, that could be a drag on stocks in general and tech in particular. But that outcome is not baked into the cake.

The debt ceiling came back into force on July 31. In the absence of congressional action to kick the can further down the road, the Treasury has been resorting to various accounting tricks to stay under the limit while still paying its bills. But those tricks only go so far.

“All the Wall Street strategists are in universal agreement this is a bunch of nothing and will get resolved without drama,” tweeted Bianco Research founder Jim Bianco yesterday.

“The last time they were this sure about something was February 2020 [when] they all concluded CV19 was temporary and not important.”

In other words, it’s more than the usual D.C. kabuki theater this time.

As best we can recall, the last time any government official set a definitive “X-Date” in this way was during the summer of 2011 — a farcical episode that sent the stock market tumbling nearly 17% in 17 days.

If Democrats operated in their ideal world, they’d ram it all through the House and Senate before close of business tomorrow.

But in the real world, House Speaker Nancy Pelosi has to mollify the “progressives” among her ranks. And Senate Majority Leader Chuck Schumer has to stay on the good side of “moderates” like Kyrsten Sinema (D-Arizona) — heretofore best known for idiosyncratic gestures on the Senate floor like…

One outlier possibility emerging from all this? Federal Reserve chairman Jerome Powell gets thrown under the bus.

The thinking is that the most left-leaning lawmakers like Sen. Elizabeth Warren (D-Massachusetts) would be willing to settle for a smaller spending package. But their price would be scrapping Powell’s nomination for a second term.

As of this morning, the betting markets still give Powell a 61% probability of reappointment — but that’s down from 85% in only two days.

But whatever the catalyst for yesterday’s freak-out, the selling is over for now.

Alas, gold is not staging a similar comeback from its own sell-off yesterday — stuck in the mud at $1,731. And silver’s getting crushed, down almost a buck to $21.56.

The day the ban was announced, a smart cookie on Twitter posted an intriguing chart of Bitcoin’s action after all the other Chinese crypto crackdowns preceding this one. We reproduce it here verbatim; click to enlarge…

Of course, past performance is no guarantee of future results. But in the present instance it does put the mainstream arm-waving into perspective.

The Meng Wanzhou saga is over. The shadow it’s casting over American business will linger for years. 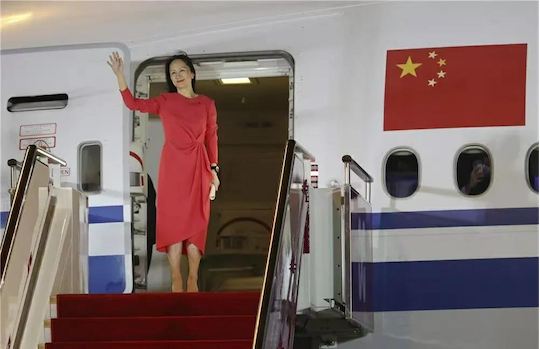 Meng arrives home in China Saturday — free of an ankle monitor for the first time in nearly three years.

Meng was wanted in Washington on charges of using a cutout company to do business with Iran while U.S. sanctions were in place between 2009–2014.

Within 36 hours of Meng’s arrest in Vancouver in December 2018, we spun the following scenario: “Imagine you’re a C-suite executive of an American multinational with a presence in China…

“Wouldn’t you at least think twice before the next time you fly over there to check out your company’s Chinese operations?

“Wouldn’t the thought cross your mind that if the Americans can do it to Meng Wanzhou, the Chinese can do it to you?

“Or at the very least, wouldn’t you feel squeamish about any plans you might have to expand your Chinese operations?”

Of course, no one in the mainstream was willing to say that aloud. With Meng safely home this week, The Wall Street Journal no longer feels the need to hold back: “That it appears to have taken a high-stakes deal to spring the Canadians from Chinese jails is a worry for some expats in China, who say Beijing may be emboldened to detain other foreigners in future spats.”

And for what earthly purpose? The entire case against Meng simply underscored to the rest of the world that Washington is eager to pick up its billy club as the “economic policeman of the planet.”

Seriously, what business is it of the United States if a Chinese company wants to conduct commerce with an Iranian company? Is there nothing outside the purview of America’s federal government?

Of course, chest-thumping nationalist conservatives are fulminating about how “Zhou Bai-Den” sold out to the ChiComs. But leaving all politics aside, it was the right thing to do. Perhaps it will forestall the day that China kicks out Apple and GM — at least for a while.

From The Guardian: “Helsinki should consider declaring itself an English-language city, its mayor has suggested, arguing that too many highly skilled international workers are shunning the Finnish capital partly because of exacting language requirements.

“Finland’s two main official languages are Finnish, which has 15 grammatical cases and is notoriously difficult for foreigners to learn, and Swedish.”

Seems too many foreign workers are washing out of a 90-day trial residency program, well before they have the option of making the move permanent.

Meanwhile, more than one-third of foreign students leave the country within 12 months of graduation, usually citing one of three factors — immigration bureaucracy, high taxes and the Finnish language.

And since the government won’t do anything about the bureaucracy or the taxes, natch, that leaves adoption of English.

“Helsinki could call itself an English-speaking city, where people who speak English wouldn’t need to speak Finnish or Swedish,” Mayor Juhana Vartiainen tells a local newspaper. Apparently, you can get by fairly well on English alone in Helsinki. (Elsewhere in the country, it’s much tougher sledding.)

Have to say, your editor didn’t know about Finnish having 15 grammatical cases, and I’ve spent the last several years living among a sizeable concentration of Finnish-Americans in Michigan’s Upper Peninsula. (Until 2015, the local NBC affiliate still carried an hour of Finnish-language programming every Sunday morning.)

Anyway, it’s no longer novel to see all the names with peculiar double letters.

And I can chuckle at the joke about how the U.P. is the only place in America where someone asked by a local business for his last name would say, “Tikkanen — common spelling.”