The Rules of Retirement Have Changed (Again)

As we write this morning, it appears Democrats might be jamming the brakes on one of the four freight trains that are all on a collision course approaching Washington, D.C.

From our understanding, the votes are there in both the House and Senate to pass a “continuing resolution” today that would keep the government’s doors open into the start of the new fiscal year tomorrow.

So no partial government shutdown at midnight.

Still to be resolved are the $1 trillion “infrastructure” bill… the $3.5 trillion education-health care-climate bill… and the drop-dead date of Oct. 18 when Uncle Sam starts defaulting on its debts. Good times.

Meanwhile, one of the “tax reforms” in that $3.5 trillion spend-a-palooza is coming into clearer view now.

For several days, we weren’t altogether sure. For that matter, personal finance experts who live and breathe this stuff weren’t sure. But after parsing all the verbiage, it appears both of these tax-reducing strategies are on their way out.

First, a bit of explanation: The backdoor Roth is an easy way for high earners to skirt the income limits for Roth contributions — about $200,000 for a couple, give or take.

High earners can get around this cap by making an after-tax contribution to a traditional IRA… and then as soon as the next day convert that money into a Roth. That’s $6,000 every year that can grow tax-free in perpetuity.

A lot of people thought it was legally suspect, but Congress explicitly authorized the strategy in the 2017 Trump tax bill.

The mega-backdoor Roth is a much more sophisticated strategy that allows you to sock away much more money.

Let’s say you’ve already maxed out your pre-tax 401(k) contributions for the year and it’s only, well, the end of September.

If your plan allows it (not all of them do), you could dump in additional money on an after-tax basis… then take that money and do an “in-service rollover” to a Roth.

The mega-backdoor Roth got some highly negative publicity in June with the release of the ProPublica website’s investigation into various tax-avoidance schemes used by billionaires; seems Peter Thiel used the mega-backdoor Roth to turn less than $2,000 of pre-IPO shares in PayPal into $5 billion — all of that growth tax-free.

And so it appears certain the rules for retirement are about to change. Again.

The last big change came with passage of the SECURE Act, signed by Donald Trump at year-end 2019 — which killed the so-called stretch IRA.

The way it used to work was you could bequeath an IRA to your kids… and if they wanted, they could “stretch” out the withdrawals over many, many years — potentially the rest of their lives — even as the nest egg would keep compounding tax-free.

Now they have to clean out the account within 10 years. That way Uncle Sam collects his precious revenue much sooner.

Shortly after passage of the SECURE Act, we speculated the backdoor Roth might be next on the chopping block. That’s indeed how it’s shaping up.

Beyond that? We’ve engaged in informed speculation here, too…

The safest bet is that sometime in the future Roths will be made subject to RMDs, required minimum distributions.

With a traditional IRA or 401(k), you’re obligated to start withdrawing money from your account once you reach age 72… and the amount increases every year.

With RMDs, you’ve got taxable income every year — and Uncle Sugar collects a steady stream of revenue until you die.

Roths are exempt from this requirement. Congress could easily change that.

Now, you might wonder: What’s the difference to you if those withdrawals are tax-free?

Well, if this is money that you’d otherwise leave within your Roth — perhaps with an eye toward passing it to your heirs — you’re likely going to move that money to a taxable account, right?

Suddenly you’re paying tax on dividends, interest and capital gains that you weren’t before.

But again, that’s in the future. For now, it’s the fate of the backdoor and mega-backdoor Roths that are on the table. We’ll keep you posted as Congress continues its wheeling and dealing…

To the markets… where traders are saying “Good riddance” to the month of September.

Barring something truly crazy before day’s end, the market is headed for its first losing month since January.

Crude? Eek — up more than a buck, and only 12 cents away from $76. Oil is bumping up against highs last seen in early July… and before that in October 2018. If it breaks through $76 and stays there… well, that’s the end of any claim about inflation being “transitory.”

The big economic number of the day is first-time unemployment claims — which jumped again in the week gone by to 362,000. At this pace, the Federal Reserve might abandon its “tapering” plans even sooner than we imagined a few days ago…

Signpost on the road of America’s decline… 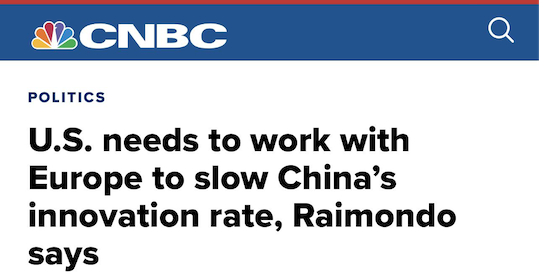 Commerce Secretary Gina Raimondo said this yesterday on CNBC: “America is most effective when we work with our allies. If we really want to slow down China’s rate of innovation, we need to work with Europe.”

Note she didn’t say anything about how America needs to, you know, “step up its game” or “out-compete everyone else on the field” or anything like that.

Because apparently that’s beyond America’s capacity now. No, the only way to “win” is to kneecap a stronger player on the field.

Privacy? Freedom? Individual rights? Where the hell has she been the last 18 months?

Well, for one thing she was imposing lockdown measures as the governor of Rhode Island — oh, and dining with her husband last December, maskless, at a time she was urging her subjects to stay home.

Where are the damn pitchforks?

ACT Research — an Indiana-based consultancy — just lowered its forecast for Class 8 truck production this year by a solid 15%. (Class 8 incorporates the tractors that pull your typical 18-wheeler.) The original forecast of 308,000 is now 265,000.

The FreightWaves website cites an anonymous industry analyst as saying more than 250,000 Class 8 trucks from a host of manufacturers are “red-tagged” — waiting for parts before delivery.

A truck shortage is going to make already-hairy logistics even hairier, no?

But the Big Scary Story in logistics this week is the planned blackouts in China.

“China is struggling with a severe shortage of electricity which has left millions of homes and businesses hit by power cuts,” reports the BBC — and the industrial northeast has been especially hard hit.

“As the world starts to reopen after the pandemic, demand for Chinese goods is surging and the factories making them need a lot more power.”

Alas, that need comes at a moment Beijing is slowing coal production in hopes of attaining a slightly “greener” economy.

Communist stupidity is at work, too: “With the government strictly controlling electricity prices, coal-fired power plants are unwilling to operate at a loss, with many drastically reducing their output instead.”

How extensive are the cuts? Yesterday, China’s state-run English-language CGTN channel ran a helpful map showing what was affected where. 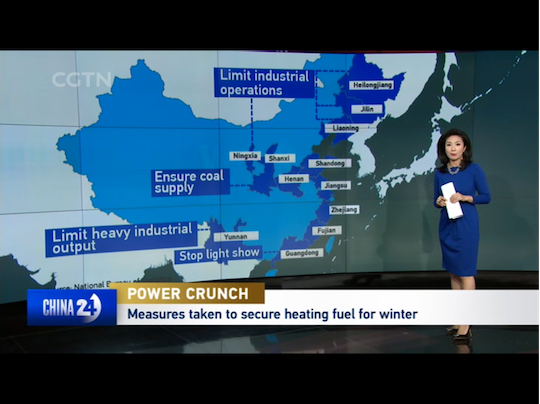 “Energy-intensive industries such as steelmaking, aluminum smelting, cement manufacturing and fertilizer production are among the businesses hardest hit by the outages,” the BBC elaborates.

We’ll just put it out there right now: This ongoing lockdown-driven debacle is going to make shopping an increasingly Soviet experience come winter.

Depending on where you are and what you’re looking for, it already is…

Meanwhile, Macy’s has a not-insignificant concern beyond sourcing product to keep the shelves full… 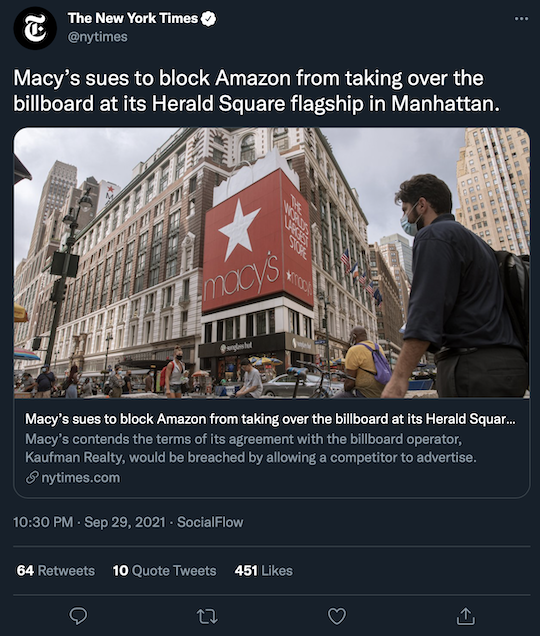 Yes, there’s a giant billboard outside Macy’s in Manhattan — iconic, really, part of the landscape since 1963.

But Macy’s doesn’t own the space!

Renewing its lease with the Kaufman Organization has never been a big deal, though — until this year.

Macy’s is suing Kaufman, alleging Kaufman gave notice that it was in talks with a “prominent online retailer”… and there’s “little doubt” that means Amazon. Ouch.

“The damages to Macy’s customer goodwill, image, reputation and brand,” says the suit, “are impossible to calculate.”

We don’t have an opinion one way or another… but just imagine a giant Amazon logo plastered all over half the camera angles in the annual Macy’s Thanksgiving parade. Sheesh…

After our brief diversion yesterday into the large Finnish-American population here in Michigan’s Upper Peninsula, a reader writes…

“I had a friend in college who hailed from Lower Michigan.

“He liked to tell ‘U.P. jokes,’ which sounded to me like recycled Polish jokes.

“This was one of my favorites:

“Q: Why do the sidewalks in the U.P. all have gutters running along both sides?

“A: So that the locals won’t scrape their knuckles while walking.”

Much funnier, we think, are the “Aino and Toivo” jokes that are told up here, with typical Finnish humility and self-deprecation. Such as…

Aino and Toivo went on a trip to Detroit.

As soon as they crossed the Mackinac Bridge, they saw a sign that said, “DETROIT LEFT.”

So they turned around and went home.