Globally, food is now its least affordable since 1974.

Of course, the mainstream gives the story a rather more positive spin. Reuters: “World food prices rose for a second consecutive month in September to reach a 10-year peak, driven by gains for cereals and vegetable oils, the United Nations food agency said on Thursday.”

The food price index calculated by the U.N.’s Food and Agriculture Organization registers 130.0 for September. That’s still a bit lower than the 2011 level of 131.9 — but only if you’re looking at the raw numbers.

The FAO also adjusts the raw numbers for inflation… and by that score, the only time food was more costly in the last 60 years was during the “oil shock” recession of 1974. 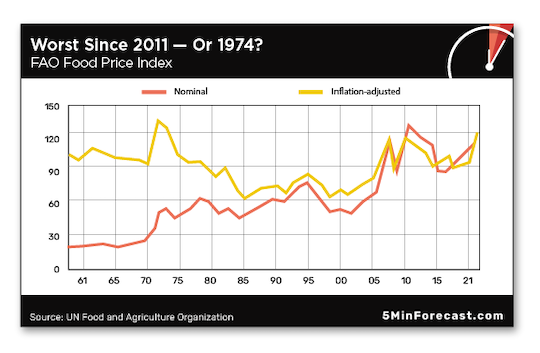 “The latest rise,” says the FAO, “was largely driven by higher prices of most cereals and vegetable oils. Dairy and sugar prices were also firmer, while the meat price subindex remained stable.”

As we’re wont to remind you whenever we report this number, it was the lofty levels of 2011 that brought on the “Arab Spring” revolts against a half-dozen or so Middle East autocrats — including Egypt’s murderous American puppet Hosni Mubarak. Empty bellies fire up the masses in a way little else can.

We’re there now. Whose head might be on the (figurative or literal) chopping block?

Meanwhile in these United States, a single statistical anomaly is covering up double-digit inflation — the sort we haven’t experienced in over 40 years.

The official inflation rate as measured by the consumer price index is currently running 5.3% year over year. But with just one statistical adjustment, that number shoots up to 12.0%.

The difference lies in the way housing prices are measured.

The Bureau of Labor Statistics started monkeying around with the inflation numbers in the early 1980s, to make inflation look less serious than it really was and — more important — to keep a lid on Social Security’s annual cost-of-living increases.

And one of the first acts of statistical sleight-of-hand was something called “owners’ equivalent rent.”

Rather than measure, you know, the median price of a home, the agency instead measures the rent the typical homeowner would collect if he were leasing his home to himself.

During the mid-2000s housing bubble, this methodology had the effect of seriously lowballing housing costs. And because housing accounts for one-quarter of the consumer price index, the overall inflation number was likewise lowballed.

And it’s happening again. Research from DoubleLine Capital — the firm founded by “bond king” Jeffrey Gundlach — indicates that absent the deception of owners’ equivalent rent, inflation would be running 12.0% and not 5.3%… 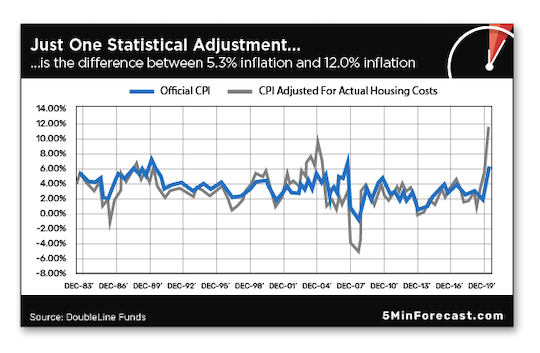 To hear the mainstream tell it, the stock market is in rally mode today because the farcical debt-ceiling drama in D.C. has been pushed back by… two months.

As we understand it, Senate Minority Leader Mitch McConnell is promising Republicans will go along with extending the debt ceiling into December… as long as Democrats set a dollar amount on the ceiling, which they appear willing to do.

Makes no sense to us, either. But a deal could be on the president’s desk as early as tomorrow or Saturday… and the Treasury would no longer be at risk of defaulting on Uncle Sam’s obligations come Monday, Oct. 18.

Doesn’t matter, that’s what’s happening. As we write, the Dow is back within 75 points of 35,000 —nearly 1,000 points higher than it was 24 hours ago, before rumor of a potential agreement emerged from Washington.

Bitcoin has slipped from its five-month highs, down to $53,697. Yesterday was the new moon, which — according to people who pay closer attention to this stuff than we do — tends to signal two weeks of crypto weakness, which then becomes two weeks of crypto strength with the arrival of the full moon, and so on.

No, correlation does not equal causation. We just amuse easily in this era of financial nihilism.

The big economic number of the day is first-time unemployment claims — which fell for the first time in four weeks to 326,000. That’s the lowest since early September. Hooray?

General Motors is the latest automaker to amp up its commitment to battery-powered electric vehicles.

Indeed, GM is bringing new meaning to the word “ambitious” — aiming to double revenue by 2030. One of the keys to that goal, execs say, will be an electric SUV priced around $30,000, less than the base model of Tesla’s Model 3 sedan.

“Declaring such long-range financial goals is unusual for the car company,” says The Wall Street Journal, “and underscores its effort to convince investors to value it more like a tech-oriented business than a manufacturer.”

We can’t shake the thought this will end badly. It’s the same holdback we have about Tesla. Much as TSLA fashions itself as a “tech” company like Google or Facebook, there’s no getting around the fact that making cars is a complicated, capital-intensive undertaking.

But even if the automakers stumble in bringing new electric vehicles to market, a handful of niche players with the right battery technology stand to make fortunes.

And some of those players are still ground-floor opportunities — as our Ray Blanco has discovered after exhaustive research throughout 2021. We’re talking $1.2 trillion in new wealth — and there’s no reason not to grab your share. Check out the fruits of Ray’s research right here.

It’s becoming obvious if it wasn’t already: Lockdowns and the resulting supply chain snags contributed to that big pipeline spill off the coast of Southern California.

From the AP newswire: “The Coast Guard is investigating whether a ship anchor might have snagged and bent the pipeline owned by Amplify Energy, a Houston-based company that operates three offshore oil platforms south of Los Angeles.

“The Associated Press reported Wednesday that the Rotterdam Express appeared to make a series of unusual movements while anchored in the closest spot to where the break in the pipeline happened, according to data collected by a marine navigation service.”

“Unusual movements”? You mean, like the movements a containership might have to make when the number of vessels waiting for a berth at the ports of Los Angeles and Long Beach is eight times what’s normal?

Greg Miller, senior editor at American Shipper, suspected as much on Tuesday before the Rotterdam Express was identified as the likely culprit. “Coincidence? Up to 144,000 gallons of oil is estimated to have spilled from a pipeline off scenic Huntington Beach, California, and within eyesight, an armada of commercial ships are stuck waiting at anchor or drifting.”

“To date,” he continued, “the public has viewed [the shipping backlog] as an amusing spectacle. But if the spill and the environmental fallout are linked to the offshore ‘parking lot’ in San Pedro Bay, some may view the pileup of waiting ships in a more negative light, the way many already see the offshore oil platforms.”

The Rotterdam Express is owned by the German firm Hapag-Lloyd. Its Frankfurt-traded shares tumbled 5% yesterday, but have recovered almost all of those losses today.

We interrupt what’s too often a chronicle of government overreach and tyranny, both federal and state, with a bit of good news.

Home-baked goods can now be sold legally in all 50 states, thanks to a decade of tireless effort in state capitals by the good folks at IJ, the Institute for Justice.

New Jersey was the last state to lift its restrictions as of Monday. Previously, home bakers caught selling even one cupcake faced up to $1,000 in fines unless they registered as a “retail food establishment.”

IJ filed suit on behalf of the New Jersey Home Bakers Association in 2017. The bad publicity was enough to prompt the state health department to relent. “Now,” Beck writes, “bakers simply must register on the health department’s website in late October to pay for a cottage food operator permit and follow common-sense sanitation requirements.”

We hope the IJ attorneys are celebrating with a cake — of the homemade variety, of course.

“It did get $60,000 worth of work done to replace the wire and pipes that were missing before it sold.

“My new neighbor is excited he will get to put another $75–100K into it and thinks he will be able to sell it in a few years for a lot more.”

The 5: Makes you wonder at what point home-equity lending will start taking off again.

Of course, the last big round of that ended in tears during the Panic of 2008. But the nature of manias is that either 1) No one remembers the previous mania or 2) Everyone justifies the present mania by saying this time is different…