“The year is 2030, and you now do much of your work and play in the metaverse,” says our science-and-wealth specialist Ray Blanco.

That is, science fiction will come to life.

“The metaverse,” Ray reminds us after our initial exploration with him last month, “is the concept of a digital universe parallel to our physical universe, a future iteration of the internet. It’s made up of persistent, shared, 3D virtual spaces linked into a perceived virtual universe.

“The concept of a fully realistic digital existence goes at least as far back as 1982’s sci-fi classic Tron, and I’m sure it probably goes back a lot further.

“But the term ‘metaverse’ itself comes from Snow Crash, a 1992 sci-fi novel by Neal Stephenson where the story is set in a world much like the one I’ve just described.”

Now think back for a moment to 1992: Precious few people had internet access and most of those who did had a poky dial-up connection.

“Many people had never even heard of the technology yet,” says Ray, “but investors and innovators were able to create fortunes as the global network ramped up to its current level of close to 5 billion human users.

“And now the metaverse is much closer to reality than science fiction.

“Computer chips are getting smaller and smaller, while becoming more efficient and affordable. Meanwhile, computer and internet networks are also becoming faster and more efficient.”

Result: “It’s only a matter of time until we’re interacting with our co-workers in a virtual office, or playing fully immersive video games that take place in a virtual world,” says Ray.

“The COVID-19 pandemic pushed millions upon millions of people into work-from-home scenarios, and for many of us, this is a permanent switch. And before we know it, we’ll be working in virtual workspaces next.”

“The metaverse economic transformation will be more than just our workspaces,” Ray adds — “social media and entertainment will be disrupted too, and things we haven’t even imagined yet will emerge.

“Today’s biggest tech leaders are already lining up for a piece of the action,” Ray goes on — pivoting to the investment implications.

“Microsoft’s CEO Satya Nadella is positioning the company to profit in an environment where he expects tech’s share of GDP will double by the end of the decade. A large piece of that growth will happen as the metaverse explodes.

“Nvidia’s CEO Jensen Huang believes the metaverse economy will eventually be bigger than the current economy.

“And when asked what new technology excites him the most, Apple’s CEO Tim Cook answers: augmented and virtual reality.”

Oh, Facebook too: Beyond the recent headlines about outages and FB’s skeevy algorithm… the company made an under-the-radar announcement about plowing $50 million into metaverse efforts. (In a “responsible manner,” execs hasten to add. Heh…)

“As far back as 2014,” says Ray, “the company dropped $2 billion to acquire VR headset developer Oculus. The company has been working on refining the headset technology ever since.

“But the company has also been investing millions in creating a social metaverse where you can virtually meet in a 3D space for fun and play. Internally, Facebook has even created a metaverse business group including some of its top execs. It’s also beta testing a metaverse workspace for its developers, viewable on its Oculus Quest VR headset.

“At this point, there’s no doubt that the metaverse is rapidly approaching.” Watch this space as Ray seeks out early-stage investing opportunities with the most explosive potential.

[Ed. note: As you might expect, Ray is taking part in our Six Predictions Summit that gets underway tomorrow at 1:00 p.m. EDT.

There, he’ll clue you in to a small company sitting at the center of an anti-aging breakthrough that produced… a 200-year-old mouse.

Whether it’s a hotter-than-expected inflation number or some other reason… the U.S. stock market is selling off again today.

Helping drag down the Dow this morning is JPMorgan Chase, the first of the Dow 30 stocks to report quarterly numbers. JPM handily beat analyst expectations for earnings… but the figure was artificially goosed by the release of rainy-day funds set aside last year during the pandemic’s early days. Thus, JPM shares have sold off nearly 3% as we write.

As long as we bring up JPM this morning, we have to mention CEO Jamie Dimon’s remarks a couple days ago about how Bitcoin is “worthless.” Give him props for consistency, at least…

Crude, however, appears to be reacting more to supply and demand and has slipped a few pennies below $80.

So about the inflation number: Yes, it came in hotter than expected — up 0.4% month over month and 5.4% year over year.

Aside from the inflationary blow-off just before the Panic of 2008, this is the hottest the consumer price index has run anytime this century. 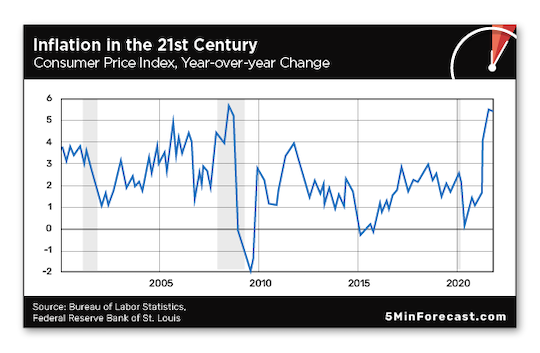 Housing costs, which drive a quarter of the index, jumped 0.4% for the month.

The hot inflation number translates to the biggest cost-of-living adjustment for Social Security recipients since 1982.

Next year’s monthly payouts will be 5.9% higher than this year’s. For a typical recipient, that means an extra $92 a month for a check totaling $1,657. (Whether that’s actually enough to cover a rising cost of living is a separate question entirely.)

And for once, it appears the COLA won’t be eaten up by higher Medicare premiums — at least relative to years gone by. The numbers aren’t final yet, but Medicare’s trustees project the typical monthly Part B premium will jump $10 next year — from $148.50 to $158.50.

The White House has summoned a bunch of executives to a meeting today because somehow the president thinks his intervention would help unsnarl the global supply chain.

In the run-up to the meeting, the White House is already touting a pledge by Walmart, FedEx and UPS to adopt 24-hour-a-day, seven-day-a-week operations. “Three of the largest goods carriers in the country… will make commitments toward moving to 24/7, working during off-peak hours,” says an anonymous “senior administration official” to The Hill.

Really, now? Because if you look at an Associated Press article posted only yesterday, you wonder how in hell they’re going to pull that off. In that single article, you learn…

For the record: Walmart, FedEx and UPS have only limited vaccine mandates, applying mostly to office staff. So a mandate won’t be an impediment to hiring — or an impetus for existing personnel to quit.

Supposedly the Labor Department is a step closer to imposing a vaccine mandate on every U.S. company with 100 or more employees.

As you might recall, the president made a very big deal about this mandate just over a month ago.

But as the weeks went by, a question arose: Where was the follow-up?

Well, yesterday the Labor Department’s OSHA unit submitted the initial text of the regulations to the White House for approval. They would be implemented under an “emergency temporary standard” or ETS — a bureaucratic maneuver that does an end-run around the usual procedures (like, umm, a public comment period) before imposing new regulations.

OSHA has resorted to this ETS ruse only nine times in the last 50 years. And five of those times, OSHA was challenged in court and lost.

Hmmm… It’s enough to make you wonder if the mandate is all a big fake-out.

Might the proposed regulations sit on a White House flunky’s desk, destined to go nowhere?

That’s the premise behind an intriguing letter to the editor published in The Wall Street Journal last week, penned by one Bruce Atkinson.

At present, “the mandate’s nonexistence shields the Biden administration from legal challenges that may ultimately restrict the Occupational Safety and Health Administration’s authority.

“The nonexistent mandate also allows so-inclined state and local governments and companies to issue their own mandates, seemingly in lockstep with Washington.”

Interesting. The rubber’s going to meet the road — quite literally — with Walmart, UPS and FedEx. Stay tuned.

To the mailbag, where a reader is thinking along the same lines…

“Is it just me, or is everyone oblivious to the notion that executive orders apply to the executive branch, and only in application to actual laws that have been passed? Did I miss something in civics class? Since when does any president or governor give orders to the private sector?

“I’m silly enough to be from the generation that believes that ‘public servants’ work for We the People. They are overpaid employees, not rulers. Good God, I wish people would remember that.

“Otherwise, I’m giving Gov. Abbott the benefit of the doubt, and hoping he’s giving cover to Texas businesses. Biden’s EO has yet to even materialize, which is likely because if they put it on the books it could be challenged in court. Biden and co. are counting on the large companies to do their dirty work under duress, as most cannot afford the fines, illegitimate or not.

“Just one reader’s humble opinion. Thanks for more great episodes of The 5 this week.”

The 5: What does the president want more? Higher vaccine uptake, or some semblance of a normal holiday season with turkey on the table and toys under the tree?

’Cause at this rate it can’t be both…