“This was by far your greatest edition ever,” a reader says of our 9/11 commemoration — among several notes of praise that came in during the weekend.

No, we’re not going to wallow in reader approbation today — well, a little more toward the end of today’s missive, perhaps.

That’s because there are far more urgent matters to attend to this morning. You see, while that edition of The 5 was published on Friday, I wrote most of it on Tuesday and Wednesday. I figured I could take Friday off and whatever I wrote wouldn’t be overtaken by events.

There’s a section of the James Madison quote from Friday’s edition that I chopped for time. It turns out to be profoundly relevant to the moment.

After his observation about war being the parent of armies, debts and taxes… and before he declares, “no nation could preserve its freedom in the midst of continual warfare,” he says this…

In war, too, the discretionary power of the Executive is extended; its influence in dealing out offices, honors, and emoluments is multiplied; and all the means of seducing the minds, are added to those of subduing the force, of the people. The same malignant aspect in republicanism may be traced in the inequality of fortunes, and the opportunities of fraud, growing out of a state of war, and in the degeneracy of manners and of morals, engendered by both. [Emphasis ours.]

In other words, a wartime atmosphere inevitably concentrates power in the executive at the expense of the other two branches of government — especially the legislature that’s supposed to be the branch closest to the people. 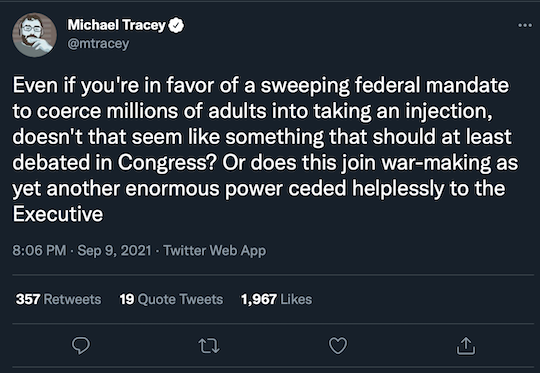 The president ordering every business in the land with more than 100 employees to demand those employees be vaccinated or get tested weekly — it does reek of monarchy, does it not?

And is there any doubt the president already wields monarchical powers when it comes to war and peace? Since the Cold War’s early days, Congress has punted on its obligation “To declare War” as laid out in Article 1, Section 8 of the Constitution — a provision designed specifically to rein in executive ambition.

A Rubicon was crossed when Harry Truman sent American troops to fight and die in Korea with no congressional declaration of war. Every U.S. conflict since — Vietnam, Panama, the Gulf War, the ’90s Balkan adventures, the post-9/11 forever wars — has been waged by executive fiat, Congress simply going along for the ride with “resolutions” and “authorizations.” (In the case of Obama and Libya a decade ago, there wasn’t even that much.)

So here we are, another Rubicon… 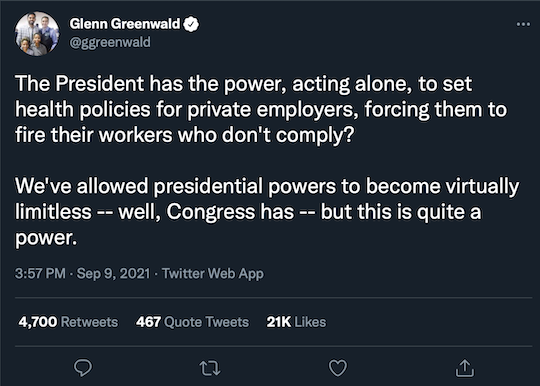 And while the trouble began in the early days of the Cold War, let’s be blunt about events in the two decades since 9/11.

It might be the single-most sweeping dictate to U.S. business ever — certainly since the 1930s.

Money and markets being our beat, we’ve been scrupulous to date about not discussing the safety or efficacy of the various COVID vaccines, even as we’ve denounced coercive measures like “vaccine passports.”

But after Thursday, the cognitive dissonance is becoming unbearable… 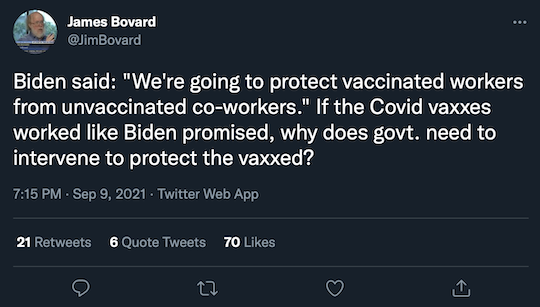 The vaccines were rolled out with the promise that the vaccinated could not be infected. “Protect yourself!” That promise turned out to be hollow.

The vaccines were rolled out with the additional promise that the vaccinated could not spread the virus. “Protect others!” Which you’d think would be the main justification for a mandate, right? But that too turned out to be hollow.

At least for the moment, it appears the vaccine still reduces the symptoms of COVID — although given the numbers emerging from the highly vaccinated United Kingdom and Israel, that too is starting to look debatable.

So for the control freaks and power trippers, their only remaining justification for a vaccine mandate is that it might make the vaccinated-but-still-infected less of a burden on the healthcare system.

Seems like awfully weak tea to us. But some business owners actually welcome the prospect. “We have been struggling as a company with hiring enough people lately,” says Chad Farley of Houston-based Zters Inc., provider of portable toilets and similar services.

“If we were to mandate it ourselves, we would lose some employees,” he explained in Friday’s Wall Street Journal. “The fact that it is coming from the government takes some of the heat off us.”

But on the other side of the ledger, there are those who would sooner give up their jobs than get the jabs.

You don’t see much about them in big corporate media — it undermines the official narrative. And the people walking away don’t necessarily want to make a big deal about it.

But where mandates are already in place, they’re there. And you do see the occasional local news story about people quitting en masse — 10% of Chicago’s school bus drivers (the mayor says parents can resort to Uber), 30 workers at an upstate New York hospital (enough that the maternity ward is shut down for the moment).

We’re aware of the argument that Biden fully expects the Supreme Court to slap him down — thus giving him the political capital to pack the court with additional justices.

But we’re not so certain the court will slap down the president — even after the 6-3 decision nixing the eviction ban imposed last year by the CDC.

Recall that Chief Justice John Roberts is obsessed with preserving the “integrity” of the court as he sees it, no matter how much it entails shredding the Constitution. Thus, the intellectual gymnastics he performed in 2012 to conclude that Obamacare is just a new tax.

Recall also how the original court-packing scheme of the 1930s worked out: The court forestalled an expansion from nine justices to 13 by more or less caving on FDR’s entire New Deal agenda.

So it’s not hard to envision Roberts joining forces with the three liberal justices and convincing one of the Trump appointees (probably not Gorsuch, more likely Barrett or Kavanaugh) to fold like the proverbial lawn chair.

Well, let’s hear from the control-freaking, power-tripping Dr. Leana Wen of George Washington University and the Brookings Institution, one of CNN’s go-to “expert analysts” on the virus. 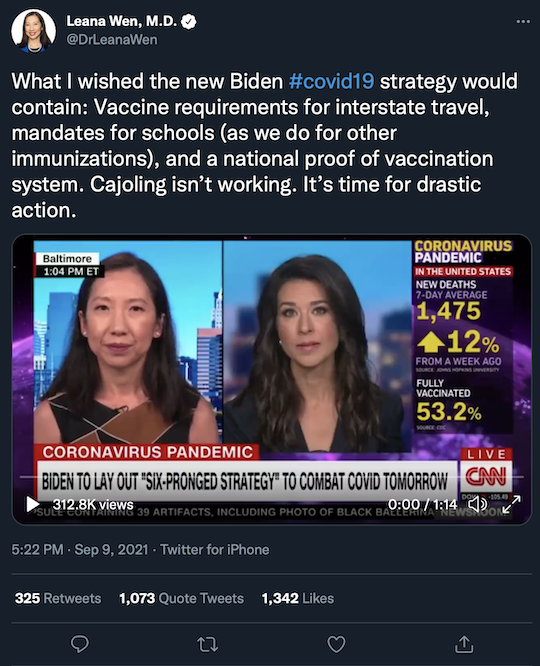 As the journalist Max Blumenthal tweets pithily, “Leana Wen of Gates/Rockefeller-funded Brookings is clearing political space for the hyper-securitized phase of the New Normal once Biden’s new round of mandates fails to do anything except disrupt the lives of droves of workers and keep public money flowing to Big Pharma.”

Or if they’re feeling especially bold, they can expand on the massive social experiment happening right now at Connecticut College.

It’s a liberal-arts college whose campus in New London is on a lockdown comparable to what many folks in Australia are experiencing.

Actually, it’s worse than Australia. There, the rationale is that the nation is way behind the curve on vaccinations relative to other developed countries. But at Connecticut College, every student is already required to be vaccinated.

And yet day after day, students mostly confined to their dorm rooms get hectoring emails from the administration like this… 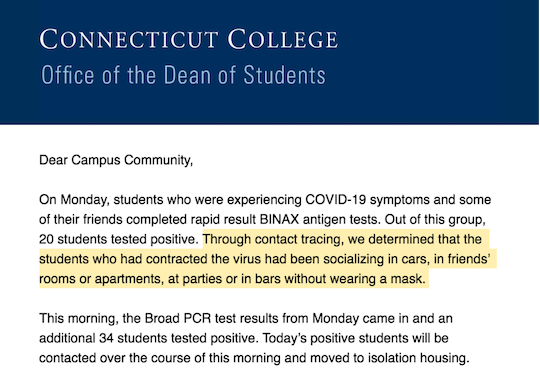 “At what point,” he writes, “will the public officials who insisted that they needed Emergency Powers on a temporary basis be compelled to relinquish these powers? Next month? Next year? Never?

“If it’s the latter, then we are being consigned to live under a state of officially decreed ‘permanent crisis’ — itself a contradiction in terms. A crisis is not a crisis if it’s temporally indefinite.”

OK, on to today’s mailbag, and we pick up where the “greatest edition ever” reader left off.

“I had a wave of sadness, however, wash over me after reading it. ‘Left leaners’ will gloss over and discredit the obvious portions, while ‘conservatives’ will not be able to interpret the article for what it is; but instead they will wag their fingers, and claim that this is no time to diminish our military efforts/spending in any way whatsoever.

“Unfortunately, the only people who get it will be those of us that had already ‘gotten it’ years ago. Thank you for your brilliant edition!

“I’m a regular reader of your missives, and while I almost always enjoy them and find value in your words, I just wanted to say that today’s article was profound in its wisdom.

“If more people read and, more importantly, had some amount of comprehension of what you wrote about the cost of constant war/war readiness both fiscally and in liberty lost, then we might stand a chance of returning to a freedom-oriented society.

“As it stands, the majority of the population doesn’t even know what that means, and some are even proud of that willful ignorance. Thus, I foresee it getting a lot worse before it gets better.

“But when I see an article such as yours, with the depth of understanding the problem so clearly evident and eloquently elucidated, it’s a reminder that there are those who still get it and have the ability to reach a broad audience. Enough, perhaps, to sway at least a few minds who have yet to grasp the peril their shortsightedness is leading us all to. And that’s a hopeful thought.

“All this has been to say, thank you and keep up the good work.”

“Thank you Dave Gonigam for Friday’s 5 Mins. In a land of extreme views based on inferior conceptualizations today’s column was a bright ray in an otherwise cloudy horizon.

“The warnings and lessons in themselves are not happy ones to hear but the clarity of thought and presentation were refreshingly welcome.

“Thanks again for a gulp of clean unpolluted analysis.”

The 5:Thanks to all for the kind words. They keep me going at moments I despair at the state of things.

And thanks again for indulging what amounts to another single-topic episode of The 5. We’re back to regular programming tomorrow.

P.S. I suppose we shouldn’t let two trading days go by without some mention of the markets.

Tomorrow brings the official inflation numbers… and while they’re heavily gamed, they’ll still offer some insight into whether sky-high wholesale prices are getting passed on to the consumer. Catch you then.