It’s happening! The first-ever crypto ETF is trading on the NYSE… It’s an event The 5 has been anticipating for several years now.

In 2018, for instance, we reported the CBOE dispatched a letter to the SEC saying they were “confident that ETFs would provide investors with a more convenient and transparent way of trading cryptocurrencies than the spot market approach.”

The letter further suggested the SEC assess crypto ETFs on a case-by-case basis and emphasized crypto’s market capitalization, which would seem to support such funds.

“The asset-management industry has been pushing for years to sell a Bitcoin ETF, seeking to cash in on a surge in the value of digital currencies,” The Wall Street Journal says.

And at long last, the SEC brooked no argument with ProShares Bitcoin Strategy ETF (BITO), which will “track the price of Bitcoin futures traded on the Chicago Mercantile Exchange, rather than Bitcoin itself. 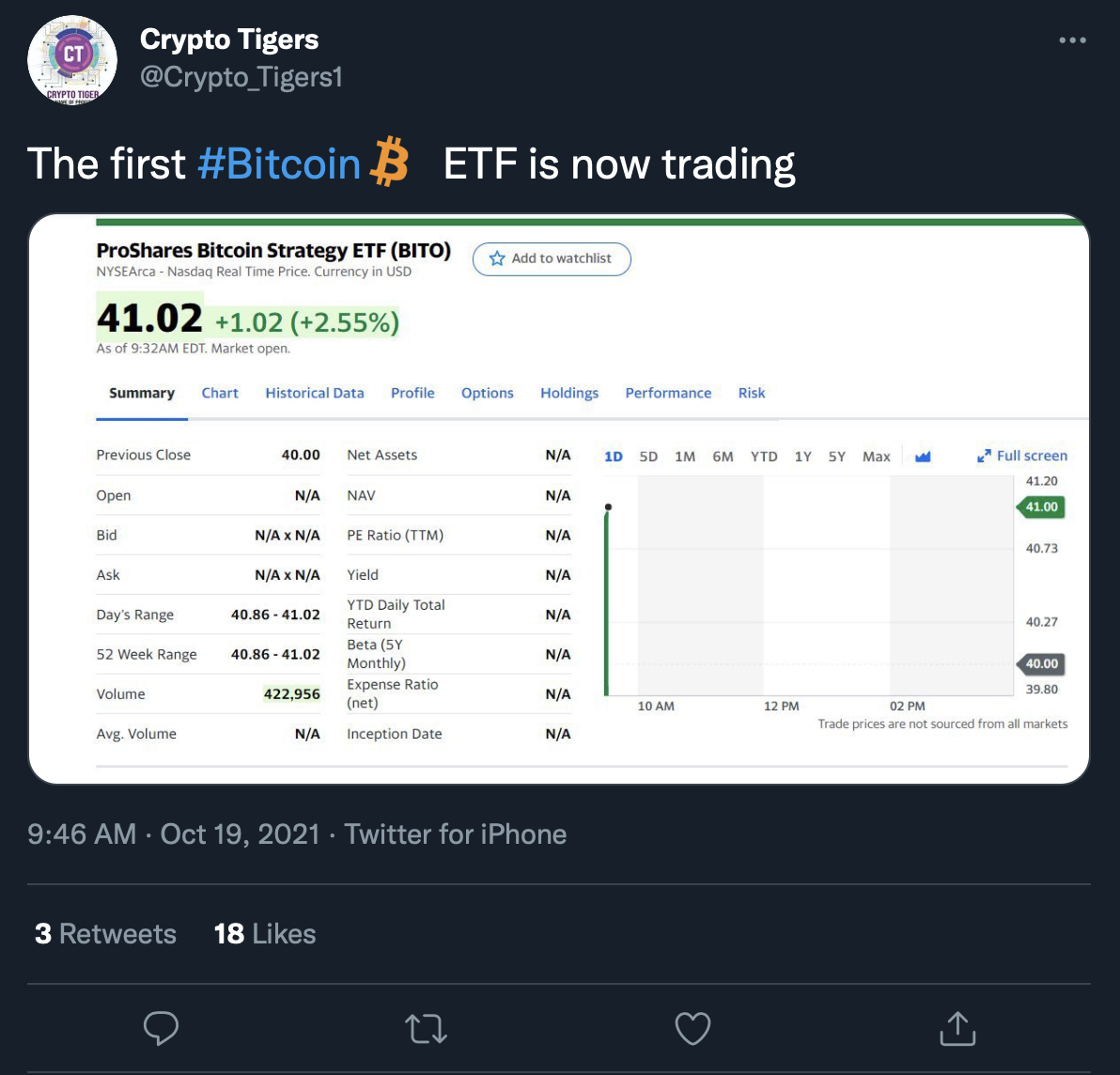 “Regulators prefer futures-based ETFs because the SEC lacks jurisdiction over crypto trading venues that aren’t registered as exchanges in the U.S.,” WSJ notes.

Fundstrat looked back to the launch of the Invesco QQQ Trust Series 1 ETF (QQQ) — which tracks the Nasdaq-100 Index – in 2002 as a frame of reference. In its first year, $36 billion flowed into “the que’s.”

“We think Bitcoin demand will exceed the inflows for QQQ,” says Tom Lee of Fundstrat. The firm predicts $50 billionwill pile into BITO its first year.

At our Six Predictions Summit on Thursday, early crypto adopter James Altucher noted “the Winklevii” — who own crypto exchange Gemini — expect Bitcoin to reach multiples of that number.

“Bitcoin is the godfather of it all,” James said. “It’s not going anywhere.” So when a curious viewer asked him when to sell Bitcoin, he responded: “Never.”

But if you’re reading this and think you entirely missed out on Bitcoin, James is eyeing a $10 token that “will ride this decentralized finance growth.” Watch the summit replay now before it goes offline on Thursday. You can even skip ahead to James at the 1:58:10 mark…

“The Dow is higher today thanks to strong earnings from PG and JNJ,” says our market analyst Greg Guenthner.

The major economic number of the day comes courtesy of the Commerce Department that reports housing starts — a measure of U.S. homebuilding — decreased 1.6% in September compared with August, exceeding economists’ expectation of a 0.3% decline.

“Residential permits, which can be a bellwether for future home construction, fell by a sharp 7.7% in September,” says MarketWatch. “The figure compares with economists’ forecasts of a 3.4% decline.”

Another supply-chain victim? Quite possibly…

Toyota says it will spend $3.4 billion on U.S. battery factories over the next nine years. “Separately, Stellantis said it was teaming up with LG Energy Solution, the battery-manufacturing arm of South Korea’s LG conglomerate, to build a new factory for lithium-ion batteries in North America,” says an article at the Wall Street Journal.

“The announcements highlight the two main paths being taken by car makers on batteries,” the article continues. “Some, like Toyota, plan to build many of their batteries in-house.

“Ford Motor Co. has also said it eventually would build its own batteries. Others, such as Stellantis and General Motors Co., are teaming up with electronics manufacturers for their batteries.”

All to say, “insourcing” is here to stay… Watch this space for ways to capitalize on the EV battery phenomenon.

“That wouldn’t normally be bullish for pot, but in an effort to get a pro-cannabis measure through Congress, a formerly stand-alone bill known as the Secure and Fair Enforcement (SAFE) Banking Act was inserted as an amendment into the NDAA,” he says.

See what they did there?

“SAFE would open up the banking system for companies operating legally in their respective states,” Ray says. “If it were to pass, it would greatly ease business transactions and help reduce the costs of engaging in the cannabis trade.”

A big if, however. “SAFE has passed the House multiple times, only to get shut down in the Senate.”Under Sens. Mitch McConnell and Chuck Schumer’s leadership.

“That’s made some House Democrats lose patience,” says Ray. “Instead of passing SAFE yet again only to see it not taken up for a vote in the Senate, they’ve tried a different tactic by putting it in a bigger, unrelated, must-pass bill.

“The NDAA is a bill that specifies the yearly budget of the U.S. Department of Defense. It gets voted on every year. It gets passed every year,” he says. “The hope is that the House NDAA bill, spiked as it is with a cannabis reform amendment, will pass ‘as is’ in the Senate Chamber.

“Will the gambit work?” Ray asks. “We’ll have to wait and see.” Today, we learn we might be waiting longer than expected…

“An important bill is stuck on pause as Dems work to reach a deal on Joe Biden’s agenda: defense authorization,” Politico reports. “They’re already quite behind schedule on NDAA… and it’s unclear when Senate floor time will be available.”

“Two of the most important stock market indexes in the world are now under heavy pressure because of adverse economic developments in China,” says our macro expert Jim Rickards.

“Our purpose is not to analyze these indexes in depth,” Jim says. “Instead we’ll take a look at the Chinese economy itself with a view to how China’s economic performance will affect its currency and its stocks.” 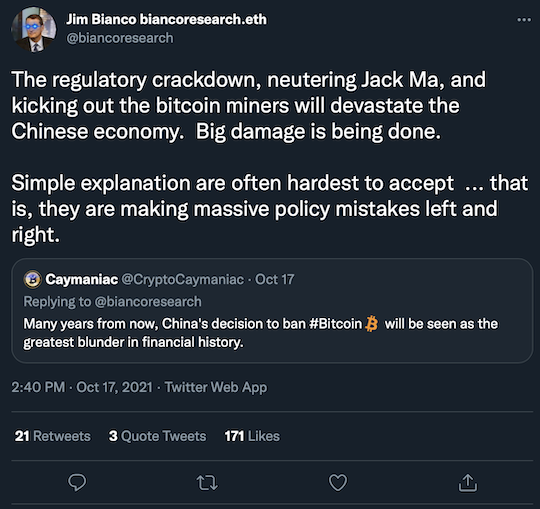 “Chinese debt has compounded annually by over 19% for the past 20 years and now stands at about $50 trillion,” he says. “That’s almost twice the national debt of the United States.

“The debt-to-GDP ratio of China is also higher than that of the U.S., and the Chinese money supply is greater,” says Jim. “Whatever criticism we might aim at the Federal Reserve, the Chinese Central Bank (PBOC) is an even worse offender when it comes to money printing, monetary ease and currency manipulation.”

Add to that: “China has not invested its debt productively,” Jim says. “Literally trillions of dollars have been invested on white elephant projects, ghost cities that stand empty and speculative residential real estate projects far in excess of actual demand.

“If normal accounting principles were applied to these investments, they would be written down by half or more immediately upon completion,” he notes. “China’s historic growth would be far less impressive if such write-downs were actually taken. They have not been.

“The real estate values are phony,” says Jim. “The debt burden is all too real.

“China’s mountain of debt is now collapsing,” Jim says. “This dynamic is crystallized in the insolvency of Evergrande, the largest property development and real estate finance firm in China… and one of the largest in the world.”

[For more of Jim’s in-depth ideas on Evergrande’s collapse, follow this link to the 1:35:28 mark.]

“Hundreds of billions of dollars of Evergrande debt was issued in the form of dollar-denominated bonds to U.S. and European investors,” he says. “Have you checked the contents of any emerging-market ETFs you may happen to have bought from Wall Street?”

To wit, the two ETFs Jim mentioned: FXI and ASHR…

“Don’t be surprised if you own some Evergrande bonds inside those ETFs,” Jim says. “Of course, the Chinese Communist Party doesn’t care about Western investors; so holders of those bonds can expect to receive nothing.

“So far, the Communist Party of China is acting as if everything can be brought in for a soft landing,” Jim concludes. On the other hand: “This is the Communists’ first financial fiasco of this magnitude,” he says. “They literally don’t know what they’re doing and grossly underestimate the risks.”

“The turkey company Butterball is concerned there may be a shortage in supply this year,” says a Chicago CBS affiliate.

“After speaking to several farmers, they say It’s not just the labor, it’s the people it takes to get the turkey from the farm to your table that is the problem.”

Robert Kauffman of Ho-Ka Turkey Farms in Waterman, Illinois, says the problem isn’t the number of turkeys. “It’s having the people to dress them — take the feathers off and get them ready to cook.” 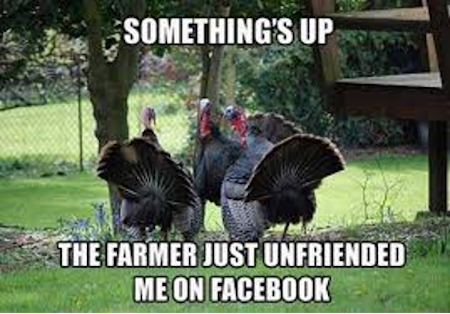 Mr. Kauffman raises about 60,000 turkeys annually and usually hires 100 temporary workers to process about 2,500 turkeys per day. This year? He only has seven extra workers. “I can dress with a skeleton crew but I don’t like to,” he says. “And I won’t get the numbers I need.”

Which explains why a local farm in my area has a considerable number of signs, letting folks know they should order their turkeys early this year.

And when I say considerable, I mean like “South of the Border”-level signage (which you’ll only understand if you’ve ever driven south on 95). But you get the idea.

Order early for the holidays this year: Between supply-chain snags and labor shortages, it’s slim pickin’s…