Team Biden is calling the global chip shortage a matter of national security… For instance, back in February, the president called it “both [a] concern to our economic security as well as our national security.”

Government officials appealing on the basis of national security is pretty boilerplate stuff — it’s an old saw Commerce Secretary Gina Raimondo repeated at a press conference Tuesday. “The lack of domestic production in America of semiconductors poses not only an economic threat but a national security threat,” she said.

“The Pentagon plans to place as much as $2 billion in rush orders by early March for customized semiconductors,” the article says, “used in weapons like the B-2 bomber before the production line for them is shut down.” 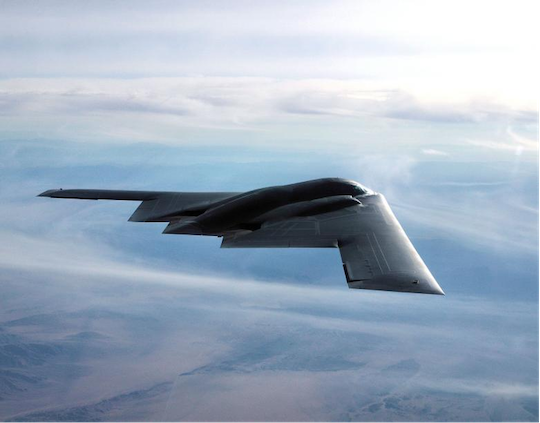 “Under a stopgap spending bill passed by Congress, an initial $885 million in orders would be placed by Dec. 15 with U.S. contractors dependent on the components,” the article notes.

“A sign of the issue’s urgency: The $885 million was the only Pentagon-related exception that the White House budget office asked Congress to approve… which generally freezes spending at fiscal 2021 levels.”

As well as the Air Force’s aforementioned B-2 bomber…

The fly in the DoD’s ointment is the $430 million sale of GlobalFoundries’ manufacturing facility to Onsemi, formerly known as On Semiconductor (ticker: ON). “The new owner won’t be making” the military’s chips, Bloomberg notes.

For its part, GlobalFoundries says: “We are meeting the DoD’s needs by manufacturing large volumes of chips sufficient for the lifetime of the program.” Or as the Air Force calls it, a “bulk buy” before the facility changes hands.

And Onsemi? The American chipmaker — with a market cap around $25 billion — is focused on providing solutions for sectors including automotive, cloud computing and internet of things (IoT). In other words, Onsemi is catering to consumers rather than Uncle Sam.

So the next time officialdom connects the chip shortage to national security… they’re not wrong? As our chief technology analyst Ray Blanco notes…

“The global chip shortage continues to ravage supply chains all over the world,” says Ray. “Advanced electronics manufacturers are having trouble keeping up with demand. And I suspect that problem will only worsen as we settle into the holiday season.

“Consumer electronics manufacturers, carmakers and even home appliance companies are all feeling the pressure of the chip shortage,” he says, “and are having trouble meeting production targets and earnings estimates.

“In fact, many big-name automakers have had downright disappointing earnings results since the chip shortage started to affect supply chains.

“On the flip side, some of the premier names in the semiconductor industry have been surging as a result of price premiums and shortened supply,” Ray says. 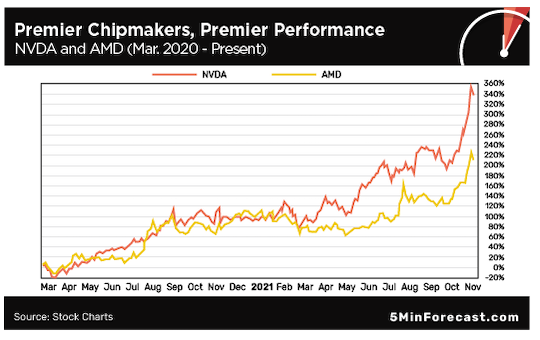 Just glancing at the chart, since the pandemic went global in March 2020, both semiconductor stocks are up over 300% and 200% respectively. This “while the world works to get itself out of this bottleneck,” Ray notes.

“So how does this translate to the rest of the market?

“For starters, there are a handful of chipmakers pledging to put more investment into production to keep up with the growing demand,” says Ray. Because “the chip shortage isn’t going away anytime soon.

“Experts estimate that we might not be out of this bottleneck until 2023,” says Ray, “potentially even later, so it becomes a toss-up on when this might end. So,” he concludes, “it’s important to pivot and make this unfortunate situation work in your favor.”

[Back to Nvidia Corp: Ray first recommended the semiconductor stock to his subscribers on Oct. 5, 2011… when it was trading at $3.15 (split adjusted). Today? NVDA trades around $300 per share.

Most recently, Ray’s identified a contingency of small chipmakers poised to be the next premier semiconductor stocks, and for your benefit, he’s recorded a timely video briefing. But because the chip shortage crisis is a fast-moving situation, we urge you to watch today.]

Mainstream financial media attributed it to the hotter-than-expected inflation numbers. Which doesn’t really add up because the sell-off didn’t begin until hours after those numbers had been released.

But the media need to come up with a “reason” for every blip in the markets, and even if the reason makes no sense, no one will remember the next day. Especially if the previous day’s action is reversed.

And speaking of EV automakers, Tesla’s CEO Elon Musk has sold just a third of the 10% of his TSLA shares he promised to sell, near as we can tell. (Given his “beneficial owner” status of shares underlying options, this whole episode begs the question: “10% of what?”)

“As of Nov. 1, the New York City Fire Department (FDNY) has reported 78 fires linked to e-bikes this year,” says an article at Smart Cities Dive.

According to the fire department’s data, the fires resulted in 72 injuries and, sadly, three deaths. And all told, battery-fire related incidents in 2021 are on pace to double last year’s number.

“The lithium-ion batteries that power e-bikes can overheat and catch fire under certain conditions,” the article explains, “especially if they are not charged… properly.”

During an October press conference, FDNY Commissioner Daniel Nigro addressed the issue, saying the fire risk with e-bikes is a “very serious problem that keeps increasing.

“The problem has started with the proliferation of battery-operated bikes,” he said. Truly… Market research group NPD says e-bike sales increased 240% during the pandemic. So the problem might get worse… 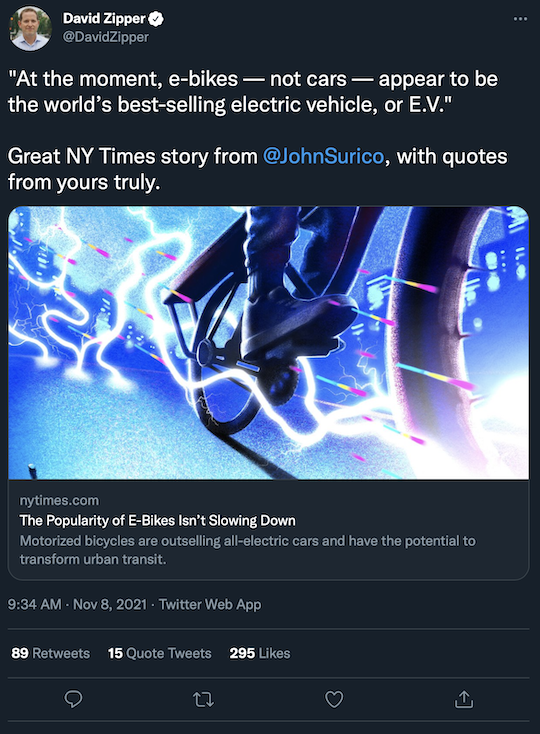 “The reality is the chances of a fire are minimal, but the effects can be dangerous,” says Mike Fritz who was “involved in the 1990s on an effort with EV Global Motors to build one of the first e-bikes for sale.”

Today, Mr. Fritz is CTO at “micromobility” consulting firm Human Powered Solutions. Human powered, you say? Call me a Luddite, but that’s the only kind of bike I want to ride. Sure, there’s a risk of getting flattened by a bus… but no fires.

“More people have become food insecure due to rising grocery store prices and the lingering effects of the pandemic,” says an article at Tampa Bay’s WFLA.

While the military can “bulk buy” semiconductors (see above), Tim Marks of Metropolitan Ministries’ Holiday Tent says this year: “We need almost 20,000 turkeys and hams for families in need and we can’t bulk buy anymore.

“The supply chain has impacted our ability to go to local chains and place large orders like we were able to do this summer.”

Plus, this holiday season, Marks says the Holiday Tent will provide food for 42,000 Tampa-area families — 10,000 more families than average.

“It’s going to take a grassroots effort from individuals going shopping and [helping] us, and we really are counting on that help,” Marks says. A good reminder as we approach the holiday season in earnest…

“A few weeks ago, I read that most of the chips needed to make new cars work are chips that were of a new design 10 or more years ago,” says a longtime reader.

“When the pandemic shut down assembly lines, the manufacturers shut down those chip lines too, without plans to start them up again, as they expected to transition to more up-to-date chips.

“It’s not just a shipping problem (you could airfreight enough chips for 100,000 new cars in one cargo jet); it’s a manufacturing problem.

“So when they talk about putting old chip plants back online, it is almost certainly to meet the demand for cars and other such ‘old tech.’”

The 5: Our savvy reader is onto something…

An article at The Wall Street Journal notes chipmakers around the world are projected to spend around $145 billion this year on R&D, but “less than $1 of every $6 is earmarked for the so-called legacy chips facing the longest backlogs right now.”

In fact, three of the biggest semiconductor manufacturers — Taiwan Semiconductor, Samsung and Intel — account for almost three-fifths of spending this year. But nearly all of that capital will go to manufacturing new, cutting-edge chips. The reason? Higher profit margins.

Nonetheless, much of the technology we use in everyday life still runs on “old tech” chips. As WSJ says: “The spending direction likely means a continually tight supply of run-of-the-mill chips used in cars, home appliances and gadgets… It also suggests the wait for orders may remain long.”

We’ll be back tomorrow… Take care!