“I think to me the No. 1 issue facing Main Street investors is inflation,” says legendary hedge manager Paul Tudor Jones, “and it’s pretty clear to me that inflation is not transitory.”

CNBC notes: “The Federal Reserve has added more than $4 trillion to its balance sheet through its open-ended quantitative easing program, while the U.S. government has unleashed over $5 trillion in fiscal stimulus…

“Jones said the trillions of dollars in fiscal and monetary stimulus is the impetus for inflation to run hotter for longer.”

And he adds: “It’s absolutely [deadly] for a 60/40 portfolio, for a long stock, long bond portfolio. So the real question is how you defend yourselves against it.”

Our retirement-and-income specialist Zach Scheidt says: “I couldn’t agree more. And if this market expert is getting concerned about inflation, it’s something that needs to be on your radar as well.

“It’s important for us investors — especially those with retirement in mind — to understand exactly why inflation is such a serious threat,” says Zach.

“Inflation increases the prices of everyday goods and services,” he continues. “And while inflation may help raise wages for those still in the workforce, it does nothing for retirees on a fixed income.

“That’s one of the reasons why it’s so important to consider inflation when you’re planning your investments. Obviously, you need to make sure you’re generating income from your investments that helps you keep up with inflation.

“But let’s remember that it’s not enough just to keep up with inflation,” he says. “You’ll also want to grow your wealth faster than inflation.

“That’s how you really get ahead. And that’s what I want to focus on today,” says Zach. “We’ll look at a few areas of the market that could help you turbocharge your returns as you sidestep this oncoming crisis.”

[HOMEBUILDERS] “The housing market is a sector that’s been red-hot for well over a year now as we’ve seen record jumps in the prices of homes.

“We’ve got prices that have moved sharply higher for several years now,” says Zach. “Homes are rather expensive compared with where they were two or three years ago.

“We may not see the growth continue at these breakneck rates. (At least, I hope we don’t!) But there’s no reason why home prices shouldn’t continue steadily higher over the next several years.

“And that’s exactly what makes this such a great place to put your investment dollars to work beating inflation.

“Homebuilders that can continue to sell new houses at such high prices are sure to continue driving profits,” Zach says. “So if you haven’t already moved money into homebuilders, now is certainly the time to check them out!

[INDUSTRIALS] “Industrials — especially steel and other metals — is an area we’re seeing a lot of scarcity in right now as we continue to live through what I call the ‘everything shortage.’

“So companies that do have access to these metals can demand higher prices. Naturally, their stock prices are moving higher as the prices of these base metals move higher.

“And as the ‘everything shortage’ keeps the supply of certain industrial metals tight, companies that produce them stand to benefit,” Zach says, “making this another great area to park your cash and outpace the rate of inflation.”

[REGIONAL BANKS] “The last area I want to cover today is banking stocks — specifically regional banks,” says Zach. “These are the traditional banks that lend money to businesses and individuals and set up checking, savings and money market accounts.

“I think these bank stocks are the ‘new Treasury bonds’ for retirees,” he emphasizes.

“Regional banks are in great shape right now because of the rise in interest rates. When rates are higher, these regional banks can lend money at higher rates. And that leads to bigger profits.

“It helps that the great reopening is in full swing,” he notes, “which means many local businesses are counting on their local banks for loans to get back up and running.”

Zach’s takeaway? “If you move some of your investments into these three areas of the market today, you should see returns that will help you not only keep up with inflation… but outpace it.”

Then there’s crypto. It’s worth mentioning… 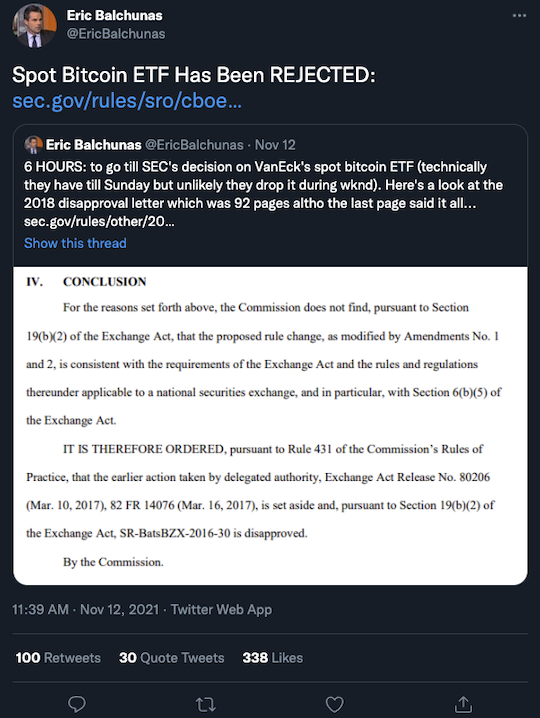 A much-anticipated Bitcoin ETF — this time based on the spot price of Bitcoin instead of Bitcoin futures — has been smacked down by the SEC. The decision on VanEck’s ETF finally came out Friday after the SEC delayed deciding in September.

The SEC’s determination comes as no surprise to 5 readers since we’ve followed SEC Chair Gary Gensler’s bait-and-switch on cryptocurrency. (Or should we say bit-and-switch?)

“Reducing carbon emissions is crucial if the world is to limit global warming to 1.5 C above pre-industrial levels… and has been the focus of the COP26 climate change summit in Glasgow,” the BBC reports.

And according to the International Energy Agency, air travel accounts for about 2.5% of the carbon emissions warming the planet.

So Delta’s head honcho Ed Bastian is issuing a call to simultaneously tighten the belt… and fork over more dough. “Over time, it’s going to cost us all more,” he says, “but it’s the right approach that we must take.”

To wit, Delta has pledged $1 billion to cancel out its carbon footprint over the next 10 years. “More fuel-efficient planes, sustainable aviation fuels and removing carbon from the atmosphere are some of the ways it hopes to achieve this,” says the BBC.

But Andreas Schafer, professor of energy and transport at University College London, scoffs at billions; instead, he says the airlines will have to come up with trillions. Shafer’s team of researchers projects airlines would need to jack up airfares by 10–20% to cover climate-corrective costs.

That’s 10–20% added to the one flight we’re allotted… every three years, right?

Diesel shortages are stymying industry insiders… “The diesel shortages cropping up at around a dozen truck stops in Ohio and the Southwest have set back truckers during an unprecedented supply chain crisis, but the root causes remain something of a mystery,” says trade publication OverDrive.

For example: “The Kingman, Arizona, TA Petro… limited diesel purchases to 60 gallons per customer… [The truck stop] confirmed it had a shortage of diesel fuel and that it had to close sometimes two or three times a day when supplies ran out.”

One explanation for diesel shortages in Arizona? Diesel prices are almost a dollar cheaper per gallon in Arizona versus California, leading to speculation truckers are simply “pumping them dry.”

“But… why are truck stops in Columbus, Ohio, struggling to keep fuel on hand?” OverDrive asks.

John Henderson, owner of Midwest fuel-hauler company Nemo Freight LLC, says he “knew of a number of supply chain crunches that had occurred in diesel and gasoline production over the course of the pandemic, such as the shortage of IVD, a gasoline additive, this spring, but nothing that would explain a diesel shortage.”

Mr. Henderson says: “My contacts at the pipelines are either tight-lipped or they just don’t know,” he says.

More on this diesel-shortage mystery tomorrow…

“Recall, SAFE doesn’t outright legalize cannabis,” he says. “However, it does allow state-compliant cannabis companies to finally be able to use the federally regulated banking system.

“So far, we’ve had no votes on the NDAA,” says Ray. “But time is running out! The NDAA is a critical piece of legislation. And it always passes because it funds the DoD for the following year.

“Time pressures are mounting to get the vote on this year’s NDAA done.” Apparently [Senate Majority Leader Chuck] Schumer intends to bring the NDAA to a vote this week… But it would appear to be one of 653 proposed amendments. They can’t vote on all of ’em…

“While we could see the SAFE Banking Act stripped out, time pressures might make it less likely,” Ray says. “Changing the House version of the NDAA would require a revote in the lower chamber.”

Ray notes: “We might see the SAFE Banking Act pass, providing a major tailwind to the cannabis industry, and cannabis stocks too.”

“What complete bullcrap!!” a reader remonstrates with Saturday’s issue of The 5 where we noted the Build Back Better Act would put the U.S. at the top of a list of 38 developed nations for personal income taxes. For top earners, to be clear.

“Is there even such a thing as an average top rate? I don’t think so. ‘Average top’ is an oxymoron, and you’re plain morons. There’s just a top rate, and it applies to very few people.

“What percentage/number? You don’t want to say because then most people will just stop reading. Your screed is clearly aimed at Mr. & Ms. Average-to-Well-Off, but they are not subject to the top rate.”

The 5: Think “average top” is oxymoronic? Well, put on your thinking cap because here’s how the wonks at the Tax Foundation figure it…

“The surcharge would equal 5% on MAGI in excess of $10 million plus 3% on MAGI above $25 million, for a total surcharge of 8%. The plan would also redefine the tax base to which the 3.8% net investment income tax (NIIT) applies to include the ‘active’ part of pass-through income—all taxable income above $400,000 (single filer) or $500,000 (joint filer) would be subject to tax of 3.8% due to the combination of NIIT and Medicare taxes.”

So yes, Virginia, there is an average top rate… Add to that, the Tax Foundation is looking at proposed tax hikes from a competitiveness standpoint, not making a class-envy argument.

Try to have a good day… We’ll be back tomorrow.