Uhhh, kinda feels like they’re late to the party…

Yeah, we’re only talking about the third-, fourth- and fifth-biggest asset management firms on the planet — behind BlackRock and Vanguard. (BlackRock is also testing the crypto waters.)

State Street Global Advisors (SSGA) runs the popular SPDR family of ETFs. “Clients are not only asking about cryptocurrencies but also specifically SPDR crypto products,” State Street’s Matteo Andreetto tells the Financial Times. “They like the fact we are a robust, safe pair of hands.”

But all the same, State Street is in no rush to meet that demand. “Andreetto said SSGA would not launch an ETF,” reports the FT, “until the group was ‘sure’ it could reach the ‘very high bar’ to sit alongside its other ETFs and ‘have all the features of [an] SPDR product.’”

So far, the bulk of “crypto ETFs” you can buy in a plain-vanilla brokerage account invest in crypto futures… or companies involved in the crypto space.

Crypto made easy for retail investors? Not yet.

But that just means if you’re willing to expend a little effort, you can still bag enormous early-stage crypto gains precisely because Joe and Jane Average are still on the sidelines.

Our resident crypto evangelist James Altucher serves up these stats: “According to a survey published by the University of Chicago, approximately 13% of Americans invested in cryptocurrency between July 2020 and July 2021.

“That’s a far cry from the 56% of Americans that Gallup believes own stocks.

“For many Americans, the thought of learning a new language, the language of crypto, is beyond intimidating. Cold storage, blockchains, hash rates, decentralized apps, distributed ledger technology, gas, mining… I wouldn’t blame anyone for being overwhelmed!

“My sense is more investors would be willing to own crypto assets if they felt it were as simple and transparent as owning stocks. Simplicity, transparency and liquidity come with time. And I do not doubt that the 13% figure will catch up to stocks in due time.”

Alas, by that time, the really big money will already have been made. Sorry, that’s just the way it goes with any asset class. Early bird gets the worm and all that.

And make no mistake, it’s still early days for crypto — even though it’s been 13 years since publication of the original white paper for Bitcoin.

But behind Bitcoin, Ethereum and the other popular buzzworthy names, there’s a whole new generation coming up.

Granted, many of them are destined to go to zero. But others have the potential to deliver you a staggering fortune.

How to tell the difference? That’s the essence of a project James and his team have been working on all year.

They’ve hit on a one-of-a-kind indicator that spots these moonshot cryptos before they make their big move.

To be clear, the indicator we’re talking about is not some sort of chart pattern. Nor is it the public bloviations of billionaires (we’re lookin’ at you, Mr. Musk)… or any kind of regulatory approval.

It’s something else altogether… and James just revealed it to our readers a short time ago during an exclusive briefing that went live at 1:00 p.m. EST.

You can watch the replay right here. We urge you to give it a look right away, even with Thanksgiving weekend looming. After all, cryptos trade 24/7 — and you never know when the next big life-changing gain might come your way.

The big story in the markets is the ongoing fallout from the U.S. government’s botched attempt to keep a lid on oil prices.

When last we left the saga yesterday, Team Biden had announced the release of 50 million barrels from the Strategic Petroleum Reserve (SPR)— the government’s emergency supply stored in the salt caverns of Louisiana and Texas.

That sounds like a big number, but we’re talking about a half-day of global oil consumption.

The new development is that OPEC and other leading producers like Russia have let it be known they’re prepared to offset the Reserve releases by cutting their own production at their next meeting a week from tomorrow.

At last check, a barrel of West Texas Intermediate fetches $78.56 — up from $76 only two days ago before this circus began. Crude is no cheaper now than it was last week, or for that matter, in early October.

Meanwhile, we still can’t get over the pundits wringing their hands about such a blatantly political maneuver, as if Joe Biden is the first president ever to do such a thing.

“The SPR has been regularly toyed with to affect oil prices over the years, and its impact has at times been substantial,” wrote the oil industry journalist Jim Norman in his 2008 book The Oil Card.

Norman chronicles how Bill Clinton monkeyed with the SPR during election season in both 1996 and 2000, while Poppy Bush and Ronald Reagan performed their own drawdowns to lower prices. The only difference now is the short-term manipulation going “splat” in such spectacular fashion.

Elsewhere, it’s a sleepy, low-volume trading day — with the major U.S. stock indexes all in the red by minuscule margins. The S&P 500 sits at 4,686, about 20 points below its record close last Thursday.

There’s a boatload of economic numbers, with federal statisticians as eager to start the long weekend as anyone else… 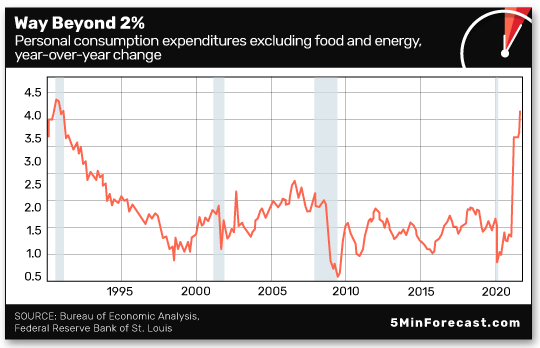 But don’t forget, it’s now Fed policy to let inflation run “hot” to make up for all the time this number spent below 2%. And this policy was in place before the pandemic hit. So the Fed’s in no rush to tighten any more than it is already with its slow-roll “tapering” of bond purchases.

At the dollar store, inflation is running 25%. Dollar Tree has raised the prices on all its goods from $1 to $1.25.

The announcement came yesterday, although we spotted a social-media post a week ago showing a receipt from a Dollar Tree (DLTR) store in Brooklyn, New York, with everything costing a buck and a quarter.

DLTR shares jumped more than 10% on the announcement.

As you might have heard, Thanksgiving air travel is likely to return to pre-pandemic levels this week. In contrast, the media’s been church mouse-quiet about a potential 4,200-person staff shortage at the TSA thanks to vaccine mandates.

On Monday — the day the mandate for federal employees took effect — a TSA flack tweeted that 93% of TSA employees were in compliance.

Which means 7% were not, or about 4,200 people. Nonetheless, the TSA spokesmodel declared, “The employee vaccine mandate will not impact holiday travel.” We’ll see how that plays out today, no?

Granted, the 4,200 weren’t all fired on the spot. ‘We will go through a progressive discipline process with our employees who have not been vaccinated,” says TSA Administrator David Pekoske.

Meanwhile, we’ll let the following speak for itself: 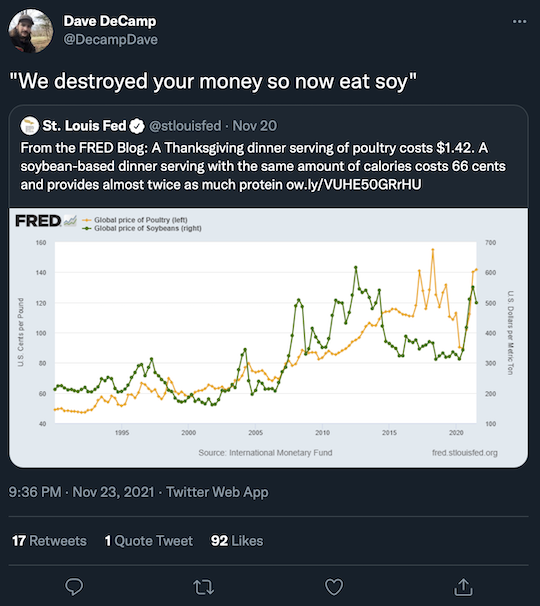 At least they’re not encouraging us to eat bugs for Turkey Day. Not yet, anyway.

“What is with precious metals prices?” a reader inquires.

“Over the past couple of months, I have watched the prices of precious metals — specifically gold and silver.

“I am dubious about their movement. I am trying to make sense of their lack of upward movement, so I thought I would reach out to The 5.

“Any chance that you could explain — in terms like only The 5 can — how their prices are not rising? I mean, inflation is climbing away and the price of everything else keeps heading north. My only thought is that we are witnessing brazen, open manipulation and suppression of their prices — especially silver, as it has more industrial uses also. (Sorry if I am behind on this or missed something.) Thanks as always!”

The 5: We don’t have much to say on the subject that we haven’t said before. Our most recent in-depth exploration is over two years old, but still covers all the essential ground.

The only thing that’s changed is the in-your-face nature of the smackdowns, often on a Friday afternoon going into the weekend.

“Dave, sorry I’m a little late on the corporate sponsorship of sporting venues and arenas,” begins a ramble from a longtime reader who spotted our item about naming rights for the Los Angeles Lakers’ arena going to Crypto.com.

“Here’s a little update on what’s going on up here in Seattle. The Coliseum, opened in 1962 for the Seattle World’s Fair, err, Key Arena err, now the recently rebuilt to the tune of 1 billion and aptly named Climate Pledge Arena. Yikes… it now houses our new NHL Team, the Kraken, and hopefully it will lead to a return of the NBA to Seattle and the Sonics!

“But I’m not writing about our sports teams. Sorry, corporate sponsors, that place is always going to be the Coliseum to me. Yes, I saw some great Sonic games there. BUT the rock concerts. Oh, what shows I saw there. The most memorable were: The Who a couple of times, AC/DC in ‘82 with a wall of marshals behind them. The 1974 Crosby, Stills, Nash & Young reunion tour after they had all been solo for several years. That show lasted four hours and was spectacular! They did an hour of their material together, then did their solo stuff in the middle and ended with another hour set of all electrical. We didn’t get out of there until 2 a.m.

“Not to be outdone. The monsters of rock at the time, Led Zeppelin in 1973 and twice in 1975. Monday and Friday shows in March ‘75, just after Physical Graffiti had been released. Just imagine the downward crescendo of “Kashmir” and eight bright white spotlights hitting five mirror balls strategically placed behind and in front of the stage. It was an amazing couple of evenings. Sorry to see you go, Coliseum!”

The 5: Heh, thanks for the memories. At least you’re finally out from under your obligations for the Kingdome — demolished in 2000, but the bonds weren’t paid off until 2015!

P.S. Our exclusive Next-Generation Crypto Summit featuring James Altucher wrapped up only moments ago. The replay link is right here.

During this event, James revealed his one-of-a-kind method for screening the new breed of cryptocurrencies — separating the dogs from the ones destined to ride alongside a 9,900% growth curve over the next five years.

P.P.S. U.S. markets are closed tomorrow for Thanksgiving Day and will trade an abbreviated session on Friday. The weekday edition of The 5 returns on Monday!