The Crypto Risk Almost No One’s Talking About

“I want to make one thing clear. I am a very big believer in cryptocurrency,” says James Altucher — who by now you’re accustomed to hearing us describe as our cryptocurrency evangelist.

You already sense a “but” coming, don’t you? (It’s a storied tradition at The 5, after all. If you’re a newer reader, you’ll catch on soon enough…)

“There is a hidden cancer lurking at the heart of the cryptocurrency industry,” James declares.

That’s the bad news. The good news? This cancer “has the potential to create a once-in-a-lifetime buying opportunity.” Maybe soon.

“While the media have largely missed the story,” James explains, “this news has the potential to not only move crypto markets, but spill over into financial markets as well.”

Here, James begs your indulgence as we get a little technical: “It’s important to understand a bit about the concept of stablecoins.

“Stablecoins are cryptocurrencies which maintain a price pegged to another currency. So for example, a U.S. dollar stablecoin should, in most circumstances, be worth exactly one dollar. In many cases, these coins are able to do this by holding $1 of cash in a bank for every coin on the market.

“The benefits of stablecoins are wide. They offer all the benefits of blockchain, like low transaction fees, and fast transaction settlement, without the crazy price volatility of cryptocurrencies like Bitcoin or Ethereum.

All good, right? Just one problem: “The biggest stablecoin company may be a fraud,” James avers.

Emphasis on the “may,” of course. Innocent until proven guilty and all that. We’re just giving you a heads-up.

It’s called Tether. Last spring, we mentioned in passing how Tether’s creators paid a fine and signed one of those “no admission of wrongdoing” agreements to settle a case brought by New York’s attorney general.

Which did nothing to quell the concerns; the feds have been snooping around Tether since at least last summer, with an eye toward building a criminal case.

“Remember how I mentioned that some stablecoins hold $1 in cash for every coin?” says James. “Well, it’s been rumored for years that Tether might have substantially less reserves than it claims.”

In the first place, “no one really knows where Tether keeps its $78 billion in assets. Secondly, Tether’s claim that it holds more than $30 billion in short-term loans to corporations would make it the seventh-largest player in that market. Oddly enough, many bankers in that space have never heard of the company, an unlikely scenario in a very tight-knit market where everyone talks.”

Indeed, even the $78 billion-in-assets figure seems like a moving target, as we’ll soon see…

Enter the Senate Banking committee — which late last month sent a letter to Tether’s CEO, asking for information on its finances, operations and processes. 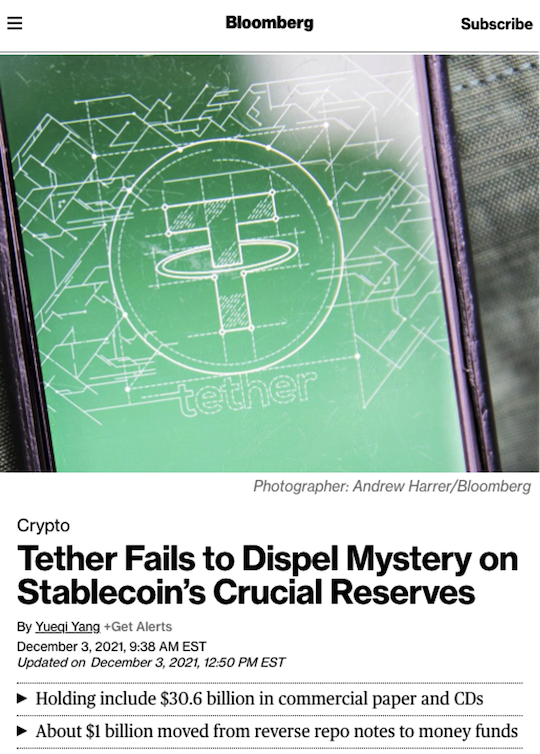 Yeah, clear as mud. An assurance from Cayman Islands-based Moor Cayman discloses assets totaling “at least $69 billion” as of Sept. 30.

But there was bupkis on the big question of where Tether’s reserves are held. Really, the disclosure is “very similar to the last several attestations,” independent researcher Bennett Tomlin tells Bloomberg.

Following the disclosure, the plot thickened… 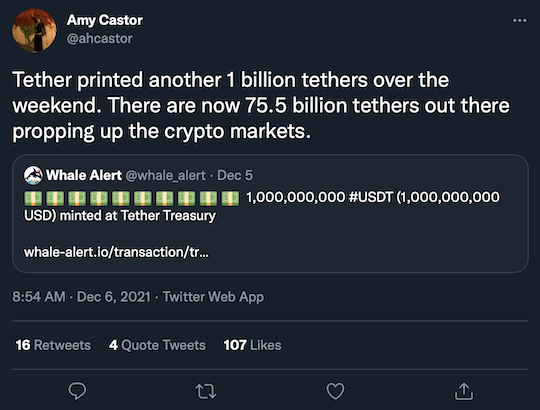 To be clear, that’s not what happened over the weekend when Bitcoin took a 20% spill. It appears to be a case of turbulence in traditional asset classes last week spilling into crypto momentarily.

In other words, a Tether-driven dislocation in the markets is still to come. “This could have a domino impact of collapsing confidence in cryptocurrency markets,” James warns, “causing investors to run for the exits.”

Here’s James’ bottom line, and we caution this is extremely nuanced guidance that you have to tailor to your own situation: “I think the crypto market is massively underestimating the risk. For this reason, I’d feel confident recommending investors take some money off the table and speak to their financial adviser about selling some of their crypto investments.”

But that’s mainly if you came to the crypto party early, you’re already sitting on huge gains and you have a short-term trader’s mindset. Probably only a tiny percentage of our readership.

Otherwise? Could be one heck of a dip to buy.

“For investors with a long-term outlook (three–four-plus years),” says James, “I’d largely stay put since I think this will be a short-term drop and I still believe that cryptocurrency has massive long-term potential.”

What’s more, James has identified a subniche of cryptos that have already proven themselves resistant to such shocks. Going forward, they have the potential to deliver gains of as much as 6,000% inside a year — and that’s on the conservative side.

James lays it all out for you when you follow this link. The presentation will be available to watch through midnight Thursday night.

In more conventional markets, stocks are staging a second day of rebound.

“I’m not sure if I buy the Omicron reasoning,” says our chart hound Greg Guenthner, echoing the skepticism we expressed yesterday. “Stocks were dropping in the background pre-Omicron. So I’m considering news about the strain to be more of an excuse than a ‘reason’ behind this recent bout of volatility.”

And with inflation numbers due tomorrow, and a Federal Reserve meeting next week? No guarantees the volatility is over.

Elsewhere, crude’s monster rebound is stretching into today — a barrel of West Texas Intermediate up over 4% as we write to $72.54, territory last seen during the big day-after-Thanksgiving drop.

Bitcoin is also staging a comeback, once again above $51,000.

For the record: Defense contractors haven’t missed a beat during the pandemic.

“The world’s biggest weapons manufacturers largely avoided the economic downturn caused by COVID-19 and recorded a growth in profits last year for the sixth year in a row,” reports the AFP newswire — citing a report from SIPRI, the Stockholm International Peace Research Institute.

The top five contractors worldwide measured by sales are the “Big Five” American firms, Lockheed Martin leading the pack with $58.2 billion in revenue.

Curiously, that pandemic resilience hasn’t been rewarded in the stock market during 2021. ITA, the big defense-and-aerospace ETF, is up about 13% year to date — not even half as good as the S&P 500’s 27%.

But we expect that’s a short-term blip. We’ve long thought defense stocks are an intriguing way to “make the empire pay” — to get a refund of sorts on the taxes you pay to support the military-industrial complex.

“Pearl Harbor is a grim reminder that threats without the ability to carry them out do not constitute deterrence,” warns retired Army Col. Douglas Macgregor in The American Conservative.

There’s a poignant irony to the video call between President Biden and Russia’s President Putin today — the 80th anniversary of Pearl Harbor.

As we write, there’s no word on how the talks are going. But going in, it wasn’t promising: “I don’t accept anybody’s red lines,” Biden blustered on Friday.

Putin drew a red line the day before — no NATO membership for Russia’s next-door neighbor Ukraine and no U.S. weapons systems on Ukrainian territory that could be used to bombard Russian territory.

Seems reasonable from our perch… but we’re just citizens and taxpayers, so we don’t count.

Here’s the Pearl Harbor link: In 1940, the Navy’s Pacific Fleet conducted its annual exercises and instead of returning home to the West Coast remained at Pearl Harbor.

The thinking was that doing so would serve as a deterrent to Japan’s ambitions in the Pacific. It didn’t work.

“On July 26, 1941,” Macgregor writes, “FDR issued an executive order freezing Japanese assets in the U.S. and halting all trade with Japan.

“Retaining the fleet in Hawaii did nothing to deter Japan.”

As Washington and Moscow rattle sabers over Ukraine here in late 2021… is the U.S. military prepared to uphold what Biden calls an “iron-clad” commitment to Ukraine?

“America’s armed forces today are no more ready for this mission than were our forces in December 1941,” says Macgregor.

Ditto, he says, for the mission of repelling a Chinese attack on Taiwan.

Ukraine and Taiwan are tightly linked in the estimation of Chas Freeman — the veteran U.S. diplomat who was Richard Nixon’s interpreter on his path-breaking visit to mainland China in 1972.

“It is clear that the Sino-Russian entente is expanding under the pressure of U.S. threats to both,” Freeman writes in an email exchange with former CIA Soviet analyst Ray McGovern. “Nothing will happen on either Taiwan or Ukraine without coordination between Beijing and Moscow.”

McGovern believes if war breaks out on one of those fronts, it will surely break out on the other — the better to spread U.S. forces too thin.

Bad for world peace. But good for defense stocks. We suspect we’ll have plenty to say on these matters going into 2022…

To the mailbag: “Do ya think maybe the weekend crypto crash was caused by owners of China Evergrande (and Bitcoin) to make an interest payment?”

The 5: Ooh, a unified finance theory!

Always possible, but in the absence of evidence, we’d have to say no for now.

On the subject of Oregon’s mask mandate possibly being made permanent, a reader submits a tip…

“Just yesterday, Oregon’s Gov. Kate Brown, the staunchest pro masker in the country, got some bad publicity for attending a Gala in D.C., indoors, and she went maskless!

“Only for photos and eating of course, her team claims. Sure. We all see it!”

The 5: Rules are for “the little people,” as the late Leona Helmsley infamously said about taxes. 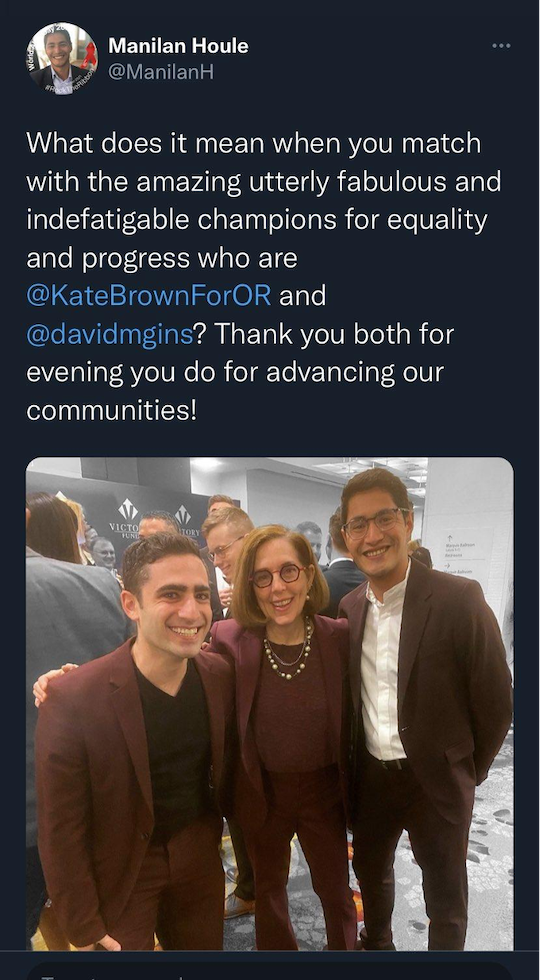 The reader sent along a web article by reporter Genevieve Reaume of Portland’s KATU-TV — who broke the original story last week about the prospect of a permanent mask mandate in the Beaver State.

In an email exchange with the governor’s political adviser, Reaume submitted this question: “Even if [the governor] wore a mask most of the time, by attending this event, where almost everyone else is maskless, it shows she feels safe taking her own precautions. Why does she get this privilege (to decide when and where to mask) yet Oregonians do not?”

Finally, a reader’s entreaty: “Please stop calling the new variant the ‘Omigod’ variant. It is the ‘Moronic’ variant.

“In all other regards, keep up the good work!”

The 5: But everyone noticed the anagram from the get-go — including a fellow reader of yours whose email we published a few days ago.

“Omigod” gets to the essence of the initial freakout — as the civil liberties attorney Jenin Younes reminds us.

And so it goes…