So we might not have gotten our “series of tubes” moment at the House Financial Services Committee crypto hearing yesterday… We’re, of course, referring to the time late Sen. Ted Stevens (R-Alaska) tried — and failed miserably — to explain the internet in 2006.

Nevertheless, there were a few moments of hilarity, mostly served up by U.S. Representative Brad Sherman (D-California) who called on his colleagues to “nip [crypto] in the bud”…

Parenthetically, we can’t not include this gem from the comedy masterpiece The Andy Griffith Show… 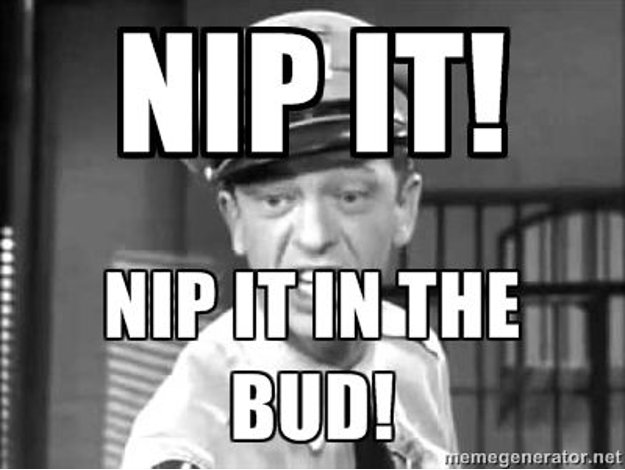 The idea behind that bit of nonsense would have granted the U.S. president power to shut off the internet… in the interest of national security, of course. And Lieberman cited China as an example of how and why the federal government’s chief executive should have the power to do so.

Interesting: Sherman wants to take a page out of China’s playbook too, banning citizens from owning, buying and selling cryptocurrency. Hmm…

As for the rest of the five-hour long hearing, The New York Times sums it up: “It followed familiar partisan patterns, with Democrats expressing concern about crypto’s risks as Republicans emphasized innovation and said that strict regulation would drive the industry away from the United States.”

“This philosophy has served me well time and again,” he continues. “Remain loyal to the market leaders, but make room for the disruptors. The reasoning is simple: Technology can change in an instant.”

Need examples? “Tech history is littered with companies that are now all but gone — one-time highflyers including Nokia, AOL, Yahoo, BlackBerry, Myspace… just to name a few.

“That’s why, when it comes to crypto,” says James, “I’m always looking for the next big thing.

“I believe today’s giants — Bitcoin and Ethereum — are great long-term investments.” In yesterday’s episode of The 5, James called them “treasuries.”

“But I also think it would be a mistake not to make small investments in so-called ‘next gen’ cryptos,” James suggests. “These are the cryptocurrencies poised to become the Ethereums or Bitcoins of tomorrow.”

In fact, James’ subscribers were party to one such recommendation in February: “I identified an opportunity to invest in one of these ‘next gen’ cryptos, Solana, when it was trading at just $10,” he says.

“Not bad for an 10-month return,” says James. “But Solana is just the start… I’ve been busy digging up other ‘next gen’ cryptos which I believe are ready for liftoff.”

[Ed. note: Crypto moves quickly — prices can go up at any minute. So get exclusive access now to James’ top crypto opportunities… before anyone else. Review James’ recent presentation before it closes TONIGHT at MIDNIGHT.]

“Stocks are taking a break… following a three-day snapback run,” says our market analyst Greg Guenthner. “I’m seeing plenty of backfilling on my screen today as stocks, energy, metals and Bitcoin all search for lower prices.”

Greg says: “We need to see if this bounce in tech is the real deal — or just a relief rally that will lead to more downside within the sector,” he says.

Coincidentally, that was just days after the birth of the internet at UCLA’s campus…

“The exclusion of SAFE Banking from the current version of the [National Defense Authorization Act] is the latest setback for cannabis reform,” says trade publication Banking Dive.

But Ray noted last month: “We could see the SAFE act stripped out [of] the House version of the NDAA.” Which is precisely what happened…

“The [Senate] chamber… served as a roadblock to the bill, as lawmakers such as [Sen. Chuck] Schumer (D-NY), and Sen. Cory Booker (D-NJ), indicated a preference to pass more comprehensive cannabis legislation ahead of the narrower SAFE Banking Act,” Banking Dive reports.

“I don’t really quite know what the hell his problem is,” said Rep. Jim McGovern (D-MA) of Schumer. “But what he’s doing is he’s making it very difficult for a lot of small businesses — and minority-owned businesses, too — [to] deal with the issue of cannabis to be able to move forward and to expand and to hire more people.”

What can we say? Politicians rarely live up to their rhetoric (keep reading)…

Despite campaign promises for “no more drilling on federal lands,” Biden has signed off on more gas and oil drilling on public lands — per month — than Trump approved in the first three years of his presidency.

According to a study from lefty advocacy group Public Citizen, the Bureau of Land Management has approved about 35% more drilling permits per month in Biden’s first year as president compared with the first year of Trump’s term.

In fact, the number of permits Team Biden has doled out in almost one year exceeds Trump permits in 2018 and 2019 too. The only exception: “The monthly average in 2020 (452 permits), when oil companies stockpiled permits in the final months of the Trump administration,” The Washington Post says. 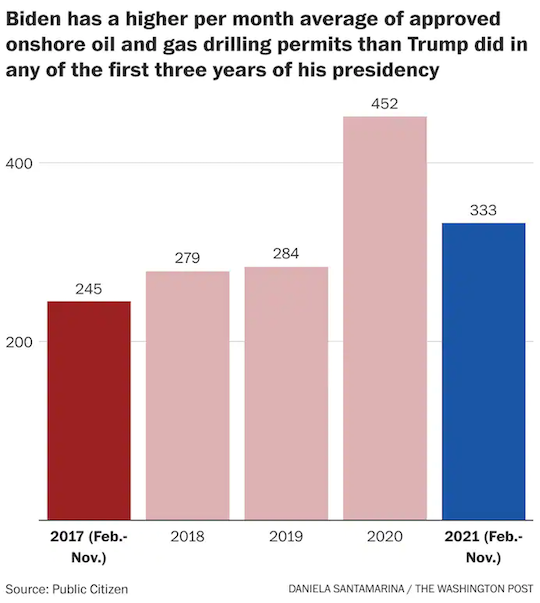 “Still, Zibel said the findings are ‘understandable’ within a broader legal context, noting that the courts have constrained Biden’s ability to curtail oil and gas development on public lands,” WAPO notes.

An anonymous White House spokesperson agrees: “President Biden kept his campaign promise and ordered a pause on oil and gas leasing on public lands, which the courts have subsequently blocked, mandating that the program continue.”

“A U.S. judge has been asked to decide what makes cuisine ‘Mexican’ — at least, in a convoluted legal sense,” says an article at Food & Wine.

“A Nevada location of Café Rio Mexican Grill has filed a complaint about a neighboring location of the salad chain Chop Stop.”

Café Rio claims its lease with landlord Dynamic Real Estate Partners stipulates the strip mall it owns would not rent to any other Mexican or Tex-Mex establishment… or any restaurant that has more than 10% of its menu offerings consisting of Mexican food.

On Chop Stop’s menu? Viva Mexico and Santa Fe salads as well as a “group of products called Chopurritos, which are salads served on a base of cilantro lime rice and seasoned black or white beans.” Oy…

But after Café Rio complained to Dynamic Real Estate Partners, Dynamic’s lawyer Jeff Adelman said: “Do I know whether Santa Fe chop salads are Tex-Mex? I don’t know, and I don’t know who knows… I need guidance from the court.”

For its part, Chop Stop denies that more than 10% of its menu is Mexican-food centric or even that 10% of its revenue is derived from said products.

Ergo… a hearing is scheduled next month to decide “whether a salad with some jalapeños should be legally considered Mexican food.”

“I loved the ‘ideal citizen’ tweet,” a reader says. “Wonder if Greta Thunberg preaches the same to her followers (and complies herself)?”

The 5: No telling… And for reference — what the hey? — we reprise the tweet from yesterday’s episode… 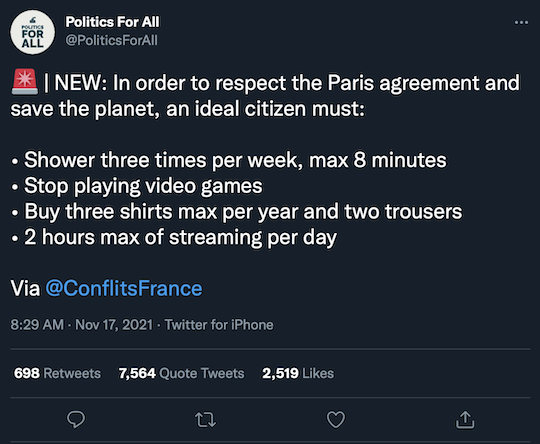 Another reader notes: “Rules to be an ideal citizen to protect the environment…

“… were written by the elite who fly hundreds of private jets. I did notice scotch was NOT on the list of things to give up,” he says, per the addendum to the tweet, urging good comrades to eschew red meat, beer and coffee.

“I (and many others) believe the reason Bitcoin dumped on Friday was not due to outright manipulation as much as leveraged positions being liquidated and getting rekt (as they say on crypto Twitter).

“Bitcoin is a very hard asset and provides a fantastic store of value, but should be dollar-cost averaged and hodled long term instead of actively traded, especially without using leverage.

We don’t understand half of what you said — heh — but keep calm and hodl on!