OK, so events are not playing out as this fellow feared on Saturday… 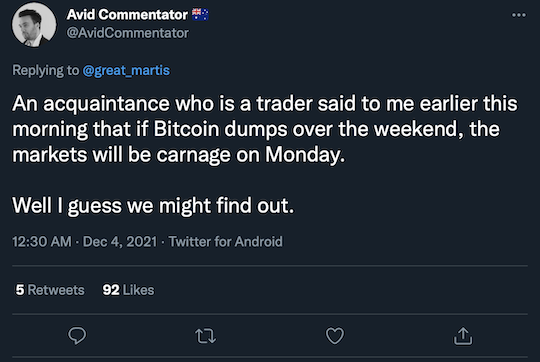 The formerly highflying tech names can’t catch a break. Not a healthy sign.

Fact is, there’s still a world of worries out there… starting with this: 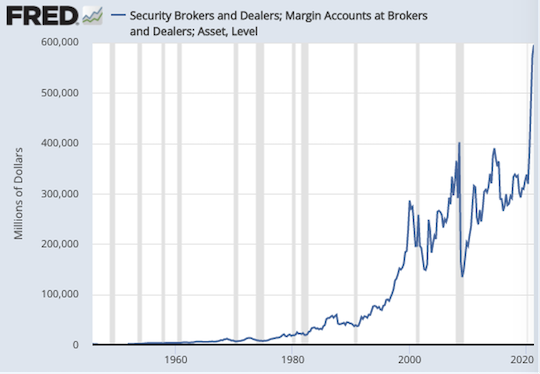 Margin debt — that is, the debt that investors take on to leverage their positions — is at record levels.

Now, we’re familiar with the argument — indeed we’ve made it many a time ourselves — that margin debt sets records all the time and by itself it’s not an ill omen for the market. It’s when margin debt starts falling from record levels that trouble sets in.

But really… given the near-vertical line on this chart starting in the spring of last year… it’s sensible to anticipate the higher the rise, the harder the fall.

This time when margin debt starts falling, there might not be adequate time to take protective measures. Now is not too soon.

And then there’s the virus.

The mainstream spin on this morning’s rally is that — as CNBC puts it — “Investors Bet on Economic Recovery Despite Omicron Threat.”

But in all seriousness… what’s changed since Friday?

Here, we return to an observation of Jim Bianco, chief of the institutional research firm Bianco Research: Politicians react first and foremost to raw numbers of cases. Not hospitalizations and not deaths. “Cases.”

Even if, as appears to be happening with the Omigod variant, the cases are mild.

And to be sure, the case count is on the rise.

Yes, the president said a week ago today new lockdowns would not be necessary in the face of Omigod.

In other words, “Lock down harder now for a stronger recovery later.”

Well, yes, if you cut off someone’s oxygen supply nearly to the point of death, the vital signs will stage a remarkable comeback!

Now, case counts are exploding all over the world — even in countries like Portugal where the full vaccination rate is 87% but new restrictions are coming into force anyway. (The U.S. rate is 59%.)

Any level of lockdown is going to put a hurt on economic activity at a time the economy is already weaker than the “experts” were figuring on — and at a time the Fed is determined to tighten monetary policy.

The S&P 500 peaked on Nov. 18 at a little over 4,700 — right around the time the Fed began “tapering” its bond purchases, dialing back Wall Street’s EZ-money heroin supply ever so slightly.

The plan is to cut off the supply completely sometime next spring, and then start raising interest rates to a point where they’ll be something approximating “normal” by late 2023.

Just one problem: “The Fed can’t make an accurate six-month forecast,” says our Jim Rickards, “so the idea that they can forecast the economy and set monetary policy two years in advance is absurd.

“The bigger point is that the Fed tried this before and failed,” says Jim.

“After that, the Fed put rate hikes on hold and then eventually cut them to zero and added new asset purchase programs during the pandemic in 2020.”

Jim says the Fed’s current tightening plan is likewise doomed to fail: “The economy is weakening due to supply chain disruption, new pandemic virus variants and low labor force participation among other factors.

“The Fed should be on hold until the situation clarifies. Instead, they are plunging ahead by tightening into economic weakness. It’s just another in a long line of blunders for the Fed. Unfortunately, it will prove very costly to investors who mistake tightening for a strong economy.”

If the past is prologue, there’s a long way to go before we approach 20% bear-market territory and Fed chair Jerome Powell turns tail again.

Is your portfolio ready for that eventuality?

Do you have a hedge that will prevent you from panic-selling? Something that can help you sleep at night while your friends and neighbors are losing it?

If you haven’t acquainted yourself with the concept of “disaster insurance” yet… now’s the time. Jim Rickards recorded this short video to introduce you to the concept. Check it out right away, because the link goes dead at midnight tonight.

Crude is rallying along with blue chip stocks as the new week begins.

As noted earlier, Bitcoin is clambering back from its weekend whacking. A consensus is forming that a bunch of Bitcoin derivatives trades — futures, for instance — were unwinding all at once and that’s what triggered the selling.

More crypto volatility might be coming this week — when congresscritters, God help us, try their hand at understanding this new asset class.

Execs from eight crypto firms including Coinbase will testify to the House Financial Services Committee.

“The hearing,” says the Reuters newswire, “marks the first time major players in the rapidly growing crypto markets will testify before lawmakers, as policymakers grapple with the implications of the new financial product and how to best regulate it.”

Oh, man. Implications? Regulations? They’re going to struggle to understand just what crypto is and how it works. We’re guaranteed at least one if not more “series of tubes” moments.

During a debate over internet legislation in 2006, the late Sen. Ted Stevens (R-Alaska) said the following: “The internet is not something that you just dump something on, it’s not a big truck, it’s, it’s a series of tubes.”

Heh. As Daily Show host Jon Stewart said at the time — recall, this was an era when liberals could be funny, before they became consumed with Obama worship and Trump derangement — “That might have sounded more like something you’d hear from, let’s say, a crazy old man at an airport bar at 3 a.m. than the chairman of the Senate Commerce Committee.”

Whelp, something to look forward to, anyway…

To the mailbag: “Dave, in regard to your last item in Friday’s 5 regarding the Oregon indoor mask mandate becoming permanent…

“A few nights ago I was watching a movie on Crackle, and one of the commercials that was shown repeatedly was an animated invitation to visit Oregon, where (and I kid you not) everyone attending an outdoor farmer’s market was masked to the gills.

“Apparently even cartoon characters are at risk in Oregon, but more importantly, that poor state is only one more bill away from masks everywhere, 24/7/365. Maybe some people will feel compelled to visit after seeing that commercial, but I’m guessing it repelled far more of us. Too bad. I thoroughly enjoyed my visits there in the ’90s. At this rate I doubt I’ll visit again.”

“We tend to take government’s statistics as gospel once they become enshrined in practice and tradition,” a reader writes after the job numbers Friday.

“I’m not perplexed that the BLS’ employment numbers don’t account for 4 million workers. The same goes for the BLS inflation indexes.

“As you have noted on numerous occasions: Any resemblance of those numbers to your own experience is purely coincidental. Such mass quantities surely involve a lot of massaging, algorithms and astral projection. I can’t give them much credence, especially when they will be revised next month.”

The 5: The numbers still have value; you just have to know how to read them.

The statisticians can’t game numbers like the labor force participation rate or the employment-population ratio. Both are awful by pre-pandemic standards, but the former in particular is how you can end up with an official unemployment rate of 4.2%, comparable to four years ago. If you’re not looking for work, you don’t count.

And the inflation numbers are still valuable for deducing the trend: Is inflation accelerating or receding?

You ignore the official headline figures, gamed as they might be, at your peril… because legions of Wall Street types who don’t know any better react to those figures and nothing else.

Next, a movie recollection: “I’m a little behind, but after reading Thursday’s 5, I can’t help but recall Demolition Man, where an underground evolves for freedom-loving peasants with gas-guzzling muscle cars and rat burgers.

“Perhaps one should buy Taco Bell stock in anticipation of the fast-food wars, heh.”

The 5: Hmmm… At about $130 a share, Taco Bell parent Yum! Brands (YUM) is looking a tad pricey right now — just off its record high of $135 last August but higher than its pre-pandemic peak in the summer of 2019. Pass…

“I went to a carpet shop the other day to buy some carpeting. They needed a deposit, so I handed them $200 in cash.

“The salesman hadn’t seen cash in a while, but said that he’s in favor of it. After he put the money in the back office and returned, I started hearing several women back there all excited, saying, ‘Wow, REAL money!!’

“Thanks for all you do.”

The 5: Subversive, you are. We approve…