Bitcoin has reached a milestone — 90% of all the Bitcoin that will ever exist has been mined.

As you might be aware, the design of Bitcoin is such that its quantity is capped at 21 million. Per figures from the Blockchain website, the total quantity of Bitcoin now in circulation has reached 18.898 million. 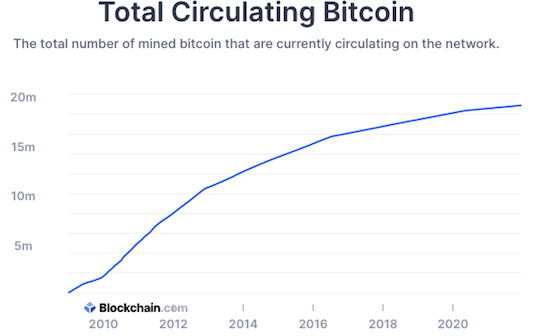 Note the trajectory of the curve on that chart, and how it progressively flattens.

And so on, and so on… until the numbers become so infinitesimal that the process exhausts itself somewhere around 2140.

Point being, the irresistible force of rising Bitcoin demand is coming up against the immovable object of limited Bitcoin supply.

Or as Bloomberg commodity analyst Mike McGlone writes, “Demand and adoption are rising and still appear in the early days versus supply, which is declining.”

Meanwhile, our own crypto evangelist James Altucher is barely 24 hours away from hosting a LIVE crypto Q&A session from his home.

It’s set for tomorrow at 2:00 p.m. EST. No need to sign up in advance; we’ll send you an email reminder with a link shortly before James gets underway. And you can submit your questions in advance using this simple form.

It’s shaping up to be another down day for the stock market, going into the Federal Reserve’s every-six-weeks policy statement due for release tomorrow afternoon.

The big economic number today is producer prices. Inflation at the wholesale level is now running 9.6% year over year — hotter than expected, indeed the hottest ever in records going back to late 2010.

And so the question facing the Fed pooh-bahs as they start their two-day meeting is how much of those rising costs will companies try to eat… and how much they’ll pass on to you and me.

Precious metals are reacting to the inflation number by… falling. Gold has shed nearly $15 to $1,772. Silver has tumbled below $22.

“There’s been a major shift under the surface of the market,” observes our income investing specialist Zach Scheidt.

The mainstream headlines have been all about a Santa Claus rally that started after the Black Friday rout, culminating in the S&P 500 setting a record by the end of last week.

But… “while the broad indexes are hitting new highs,” says Zach, “there’s a new brand of stocks driving the action right now” — while at the same time, “many of the old favorites continue to take on water.

“Stocks with healthy businesses, loyal customers and reliable profits will continue to do very well,” he ventures. “And since these companies represent some of the largest companies in our U.S. stock market, the overall environment for investors should be healthy.”

He’s talking about Apple, Microsoft and Alphabet, among others. “These companies have matured from being highflier growth companies to now being stalwarts that generate reliable profits.

“Shares of these companies are either at (or close to) all-time highs. And there are dozens of other respected profitable companies in a similar boat. These are the names you should be focusing on for the Santa rally.”

On the other hand… “a younger generation of highflier stocks are already experiencing a rude awakening,” Zach continues.

Count on the Federal Reserve accelerating its “taper” tomorrow to counter inflation. That means investors will start to become pickier about which shares they own. That means more speculative names will be left in the dust.

“You know the names I’m talking about,” Zach says — “stocks of the Docusign (DOCU) and Peloton (PTON) variety.”

“With sky-high stock prices and major challenges to their businesses, these stocks are trading lower,” Zach concludes. “And they’re still very vulnerable!

“I would avoid these speculative names for now. To benefit from the Santa Claus rally, stick with companies that are performing well in today’s economy.”

The mood of small business is little changed over the last month, judging by the National Federation of Independent Business’ latest Optimism Index.

Inflation is casting a pall over the numbers, per the NFIB’s report: “The net percent of owners raising selling prices increased six points to a net 59% (seasonally adjusted), the highest reading since October 1979.”

Meanwhile, good help is still hard to find. On the part of the survey where business owners are asked to identify their single most important problem, “quality of labor” was cited by 29% — a record high in the decades-long history of the survey.

Taxes and inflation are tied for a distant second at 18%. Only two months earlier, inflation was still at 10%.

Supply-chain snags we hadn’t started worrying about yet: China’s government is imposing smog-reduction measures in 64 cities ahead of the Winter Olympics in February.

In other words, shuttered factories.

“The area encompasses some of the country’s most important heavy industrial hubs,” says the South China Morning Post — “such as Tangshan, the world’s biggest steel-producing city in Hebei Province; Shanxi, the country’s largest coal mining province; and major aluminum-producing provinces Shandong and Henan.” As you might recall, factory production in many parts of China was throttled earlier this fall by planned blackouts, the better to cope with surging demand for (and limited supply of) coal.

“So this is still a supply-side shock, and the shock will not be gone until mid-March,” according to Ting Lu, chief China economist at Nomura. The torch will be lit in Beijing Feb. 4… and the Winter Paralympics don’t wrap up until March 13.

So this is what our “green” future looks like: Governments offering carrots, then imposing sticks… and finally taking the carrots away.

From the Reuters newswire: “California on Monday proposed reducing the rate at which homeowners can sell excess electricity from their rooftop solar panels into the grid, weakening a policy that has underpinned dramatic growth in the renewable energy industry for years.”

Mind you, this is after the state mandated solar panels on all new homes starting Jan. 1, 2020. Funny how that works, huh?

At present, customers are paid between 20–30 cents per kilowatt-hour for the excess electricity they sell into the grid. Under this proposal from the Public Utilities Commission, that would be slashed to about 5 cents.

But that’s not all, says the Los Angeles Times: “New solar customers would pay a monthly ‘grid participation charge’ of $8 per kilowatt of solar power per month to help cover the costs of maintaining the grid, such as utility safety projects to reduce the risk of wildfire ignitions.”

For a typical-size residential solar system, that’s $40 a month. Many Californians have much larger systems and would pay much more. All this to subsidize decades’ worth of failure on the part of PG&E and other utilities to do basic maintenance like trimming tree branches in the vicinity of power lines.

To be sure, it’s only a proposal for now. The solar industry is obviously unhappy that owners of existing homes would have less incentive to go solar. We’ll see how it plays out…

As companies wrestle with supply chains, labor shortages and inflation, “mentions of the word ‘journey’ by S&P 500 executives on conference calls this year have soared almost 70%,” according to Bloomberg — which has some kind of sooper-seekrit algorithm that can process transcripts of those calls and generate a chart like this… 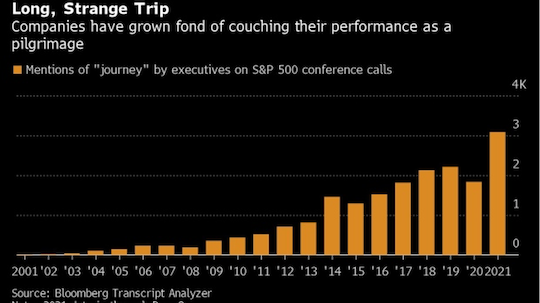 [Memo to GM’s finance chief: You’re still an automaker, just like Tesla. It’s a capital-intensive business in a way Google never will be. Deal with it.]

“Whatever the journey entails,” says the Bloomberg story, “the end date is rarely, if ever, defined. ‘The word has the advantage of being opaque,’ says Mark Stoeckle, chief executive officer of Adams Funds, which manages $3 billion. ‘This allows companies to gain flexibility.’”

“I am calling BS on the Peloton staff cardiologist,” a reader writes after we noted the absurdity of a company feeling compelled to respond to the death of a fictional character while using one of the company’s products.

“She made a matter-of-fact statement to the LA Times insinuating that big steaks increase your heart attack risk.

The 5: You’re really surprised? Her outlook is part and parcel with the whole demonization-of-saturated-fat thing.

A few years ago, it seemed as if mainstream thinking about diet and exercise was finally starting to evolve beyond the 1990s paradigm of low fat, high carbs and what the primal-health guru Mark Sisson calls “chronic cardio.”

For instance, we perked up in 2014 when a meta-analysis of hundreds of studies found that, as Nina Teicholz wrote in The Wall Street Journal, “Saturated fat does not cause heart disease.”

But that was then and this is now. Conventional wisdom has all but slid back into the bad old days when you could down an entire box of “SnackWell’s” cookies in one sitting — they’re low-fat, dontcha know — and as long as you work it off with 90 minutes on a machine while keeping your heart rate at 80% of max, it’s all good!