Melania NFT (Why Not?)

If there can be Trump Steaks and Trump Vodka and even a Trump University… well, why not a Melania Trump NFT?

“Melania Trump has become the latest celebrity to try to cash in on the craze for non-fungible tokens,” Bloomberg reports.

NFTs are still a new enough phenomenon in the crypto space that we need to backtrack and explain: They’re unique digital files, often with a “signed by the artist” significance. Good example: Twitter founder Jack Dorsey’s first-ever tweet, authenticated by Dorsey himself, was auctioned for $2.9 million this year.

So why wouldn’t Melania want in on the action? Back to Bloomberg: “The former first lady’s first NFT, called Melania’s Vision, will include watercolor art that ‘embodies Mrs. Trump’s cobalt blue eyes, providing the collector with an amulet to inspire,’ according to an emailed statement.” 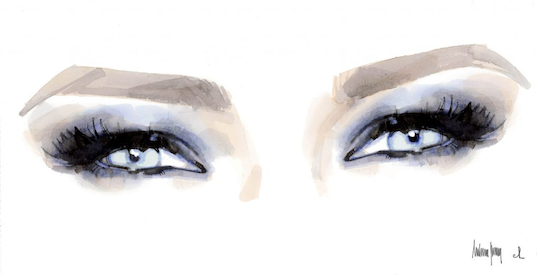 This is NOT the Melania’s Vision NFT, but if it were, it would look just like this

It went on sale yesterday and will be available through year-end. Price: One SOL, a crypto that runs on the Solana blockchain — priced as we write this morning at $169.91.

OK, so scarcity is obviously not the appeal here. Instead, Mrs. Trump appears to be operating on the NFT business model of the NBA, which hawks NFT highlight clips — you know, random dunks by the likes of Steph Curry and Kevin Durant. A “starter pack” of three NFTs goes for only $9.

Still, we perked up at the fact these NFTs are priced in SOL. As it happens, our James Altucher got readers of his Altucher’s Investment Network into Solana early this year. They’re up 1,787% in only nine months.

Without going into great detail, Solana solves a lot of problems that legacy cryptos can’t. In fact, James believes Solana is “uniquely qualified to become the leading blockchain for DeFi.”

That is, decentralized finance — “smart contracts” that will make possible a future of banking without banks and insurance without insurance companies. (Sound appealing?)

We imagine we’ve raised more questions than we could possibly answer in our 5 Mins. Fortunately, James conducted a crypto Q&A session only two days ago — answering the most-asked questions posed by your fellow readers. He was joined by another of our gurus, George Gilder.

Click here for a rebroadcast of James’ crypto Q&A session

Out of fairness to the folks who made the time to watch the event live on Wednesday, we’re keeping access to the rebroadcast strictly limited. It’s available to watch only through midnight tonight, so we suggest you give it a look right away. You can always come back to the rest of today’s 5 later.

The U.S. stock market is in a curious sideways grind as the week winds down.

After we went to virtual press yesterday, the Nasdaq fell out of bed — tumbling nearly 2.5%. In contrast, the Dow ended the day little changed.

As we write today, it’s the reverse — the Dow down more than 1% or 400 points, while the Nasdaq is down fractionally.

On the one hand, the S&P 500 is down a mere 1.4% from its record close a week ago today. On the other hand, hundreds of individual names are mired at 12-month lows. And yesterday, even some of the big dogs propping up the major averages — Apple, Nvidia, Tesla — took a spill.

Which leaves us once more with the nagging thought that what’s really weighing on the market right now is politicians’ overreactions to the Omigod variant.

France has again shut out tourists from the U.K. Canada is on the verge of re-closing the border to Americans. The world is getting smaller once more.

And as mentioned here yesterday, the writing is on the wall in deep-blue U.S. jurisdictions. Reason writer Robby Soave elaborates on Twitter: “I expect that all the restrictions are coming back in the blue areas of the country, barring mass civil disobedience.” 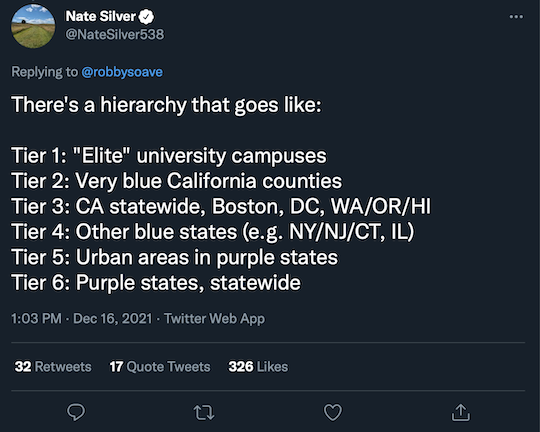 We’ve dragged Silver in years gone by — for instance, on Election Day 2016 — but his analysis looks spot-on here. At the moment, he says the restrictions are mostly confined to Tiers 1 and 2… and he won’t be drawn on how much further it goes.

Meanwhile in South Africa, where the Omigod variant was first reported, the hospitalization rate is plunging even as the number of cases is exploding — which reinforces the early evidence that this new variant is highly contagious but also very mild.

No matter: As we keep saying, it’s only raw case counts that the politicians look at…

Meanwhile, no relief in sight on the supply-chain front.

The movement of shipping containers through the Port of Los Angeles dropped 14% from October to November.

“The amount of cargo stuck waiting offshore of Los Angeles/Long Beach continued to rise as imports handled by the ports fell,” writes Greg Miller at American Shipper. “In fact, the capacity stuck offshore increased even more than imports declined…

“According to the Marine Exchange of Southern California, 102 container vessels were waiting for berths in Los Angeles and Long Beach on Wednesday. The combined number of containerships waiting offshore and at the berths is at or near an all-time high.”

Then again, we’ve seen this movie before. A weekly close over $1,800 is something the powers that be would just as soon avoid if they can help it. Silver, meanwhile, sits at $22.48.

Other non-dollar assets aren’t faring as well. Copper is flat on the day at $4.31. Crude is down nearly 2% and back below $71. The biggest cryptos are also down about 2%, with Bitcoin back below $47,000 and Ethereum threatening to break below $3,900.

For the record: The rumblings from Washington are that the Democrats’ $1.85 trillion health care-education-climate spendapalooza — aka “Build Back Better” — is dead in the water. At least for 2021 and maybe for good.

As a reminder, most of the Dems’ proposed changes to the tax code were tied up in this legislation. So an immense amount remains up in the air at year-end 2021: A super-tax on incomes over $10 million? An end to backdoor and mega-backdoor Roth IRAs? Lifting the $10,000 cap on deductions for state and local taxes?

Who knows? Good luck. (For now, your editor will hold off paying property taxes until the calendar flips to 2022. If the SALT cap is lifted, it might pay to start itemizing again.)

Seven years after the first “de-dollarization” meeting between Russia and China, the two nations are redoubling their commitment to escape the greenback’s shadow.

The meeting, according to Kremlin aide Yury Ushakov, saw “special attention paid to the necessity of accelerating efforts on the formation of independent financial infrastructure for servicing trading operations between Russia and China.”

During the saber-rattling between Moscow and Washington over Ukraine a couple weeks ago, U.S. officials floated the possibility of kicking Russia out of the SWIFT international payments system. Clearly, Putin took that to heart and found a sympathetic ear with Xi and they’re keen to move forward with a counter-SWIFT, as it were.

We’ve been on the de-dollarization case from the beginning in 2014. Our own Jim Rickards anticipates a day when Russia and China (and Iran) team up on “a robust multilateral payments system that is free of hacking, tracking or interdiction by the U.S. and free of U.S. dollars” — thereby rendering U.S. sanctions toothless.

You can acquaint yourself with the phenomenon in our most recent in-depth treatment two years ago. That was pre-pandemic, but clearly the pandemic hasn’t put a stop to de-dollarization efforts.

“COVID vaccines and personal freedom,” reads the subject line of a reader’s email.

“I have a CoVid treatment philosophy question, I guess. I have never seen this idea addressed in the MSM. Perhaps because it’s too controversial or naive.

“Early on in the pandemic, the real crunch was on hospitals and medical personnel who lacked the capacity to treat all of the infected. Moreover, those patients who needed elective surgery were forced to wait until such time as capacity allowed.

“Then the vaccines came along — and with them the recalcitrance of a significant portion of the population, which declined them. Controversy over personal freedom erupted and our nation became further polarized.

“Today we are once again faced with backlogged medical facilities and stressed personnel. Elective surgeries are once more placed on hold, with all the discomfort, even pain, that entails for some patients, until such time as hospital capacity permits relief.

“My idea or question, really, is why not triage the non-vaccinated, infected, seriously ill patients to live or die with the consequences of their decision to forgo vaccination? Wouldn’t this be more equitable and less polarizing than mandates and other freedom restrictions? Or does the Hippocratic Oath have something to say about such a practice?”

The 5: Your question presumes these decisions should be made in top-down fashion by some centralized authority.

But that’s largely how we got into this mess in the spring of 2020. For instance, state-level CON laws demanding a “certificate of need” before you can build a new hospital, thus limiting the number of beds. Or the CDC’s and FDA’s onerous limits on both testing kits and surgical masks.

We bemoaned those obstacles in real-time as they became evident. But no one wanted to talk about second-order effects or unintended consequences.

Here we are 21 months later, and the CDC reports this week the leading cause of death among American adults age 18-45 is… not the virus, but fentanyl overdoses. They’ve doubled since 2019.

Drug overdoses and suicides among the middle-aged and working class were already rising at an alarming rate in the years preceding the pandemic. “Deaths of despair,” the economists called them.

And then those numbers exploded during the pandemic era — amid lockdowns that only worsened the sense of isolation and the loss of purpose. Gee, whoda thunk it?

But that’s the great thing about being a “public health” official. You don’t have to worry about second-order effects or unintended consequences. As long as childless, work-from-home folks who listen to NPR all day approve of the measures you impose on the rest of the populace, you’re golden.

Getting back to your point, though, we do see a cadre of hardcore leftists on social media — folks who support “Medicare for All” and “health care is a right” — who also say the unvaxxed should be left on their own. Not sure if that’s the company you care to keep…