Interesting: The Fed has turned hawkish, and Wall Street isn’t freaking out.

After we went to virtual press yesterday, the Federal Reserve performed its every-six-weeks ritual of issuing a policy statement and parading the chairman in front of the cameras for a press conference.

As expected, the Fed will accelerate the “tapering” of its bond purchases. A process that previously was on track to end next June will now wrap up in March. The steeply rising line on this chart of the Fed’s balance sheet will then level off, the way it did in 2015. 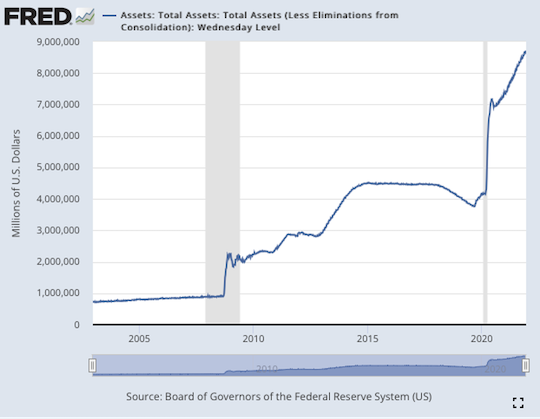 Less expected, at least to the mainstream, was this: The Fed pooh-bahs came to a rough consensus that they’ll raise the benchmark fed funds rate three times next year, the better to tame the inflation monster.

It was no surprise if you were reading us on Monday. Our floor-trading veteran Alan Knuckman was looking at the activity in futures keyed to the fed funds rate: Three increases in 2022 were in the bag.

But the vast gaggle of Wall Street analysts and economists ignore this valuable signal. Until yesterday, they were figuring on one increase at most.

For the Fed to violate expectations so dramatically? The market could have easily fallen out of bed yesterday afternoon.

But it didn’t… because Fed chair Jerome “Jay” Powell assured Wall Street he has their back.

On Twitter, Bianco Research chief Jim Bianco highlights this part of the press conference transcript — after Powell is asked why not go cold turkey with the bond purchases, if inflation is so concerning…

Did you notice how Powell began his answer with “So”?

As we’ve pointed out for years now, starting your answer to a question with “So” betrays a lack of confidence in what you’re saying — or even a worry that you’re contradicting something you said previously.

Powell — and his predecessor Janet Yellen — frequently resorted to this unconscious “So”-ing.

OK, here goes. This is my one chance to sound as if I’m being tough on inflation but still assure the market that I’ve got their back. I’m NOT going to **** this up the way I did with the balance sheet three years ago and stocks tanked nearly 20% and then I had to backpedal. God, that was so embarrassing, I looked like such a putz. No way am I going to let that happen this time. Here we go. DON’T **** IT UP, JAY.

After an initial wobble with “So”… he stuck the landing.

There you have it: The Fed will give lip service to staying “ahead of the curve” on inflation (as the financial pundit class loves to say). But in the end, it’s the stock market calling the shots.

(Where is this “curve” located anyway? What does it look like? Is it a gentle, sloping curve or a sharp, hairpin curve?)

And with that, the major U.S. stock indexes got back on the rally tracks — the Dow ending the day up nearly 400 points, and the Nasdaq leaping 2.2%.

Gold has been climbing slowly since the Fed announcement and is now only four bucks away from $1,800. Silver is comfortably above $22 again. Crude has rallied to $71.39.

Even better for the stock market, the day’s economic numbers show no hiccups in the pandemic recovery — the Omigod variant notwithstanding.

The big number is industrial production — up 0.5% in November, goosed by a 2.2% jump in production of autos and auto parts. Seems as if the automakers are finding workarounds for the supply-chain snags.

All told, 76.8% of the nation’s industrial capacity was in use last month — equal to pre-pandemic levels in November 2019… 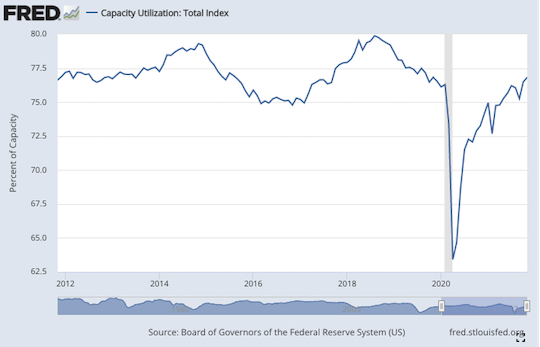 Homebuilding activity is likewise robust: Housing starts jumped 11.8% in November — way more than expected. And permits — a more reliable indicator of future activity — also surprised to the upside with a 3.6% increase. A continued burst of building in advance of rising interest rates next year? Likely.

Elsewhere, first-time unemployment claims totaled 206,000 for the week gone by. There’s been a lot of noise in this number lately owing to “seasonal adjustments”… but given the tight labor market, it’s evident the usual year-end layoffs aren’t happening in 2021.

But while the Omigod variant isn’t laying the economy low… government response to it just might. 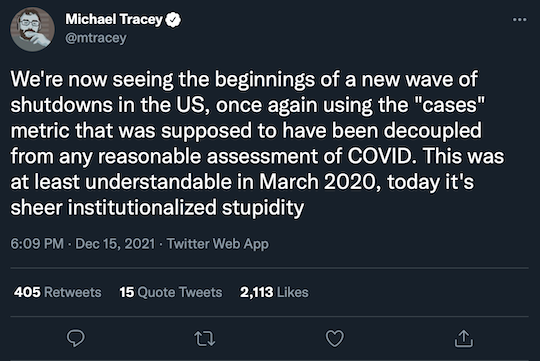 For now, the most extreme responses are limited to elite college campuses that lack lucrative sports programs. Princeton shut down in-person instruction two days ago — right before final exams. Vassar has cancelled all on-campus social gatherings this week. This is despite vaccination rates of over 95%.

But the writing is on the wall in deep-blue states. California’s indoor mask mandate came back into force yesterday.

And then there’s the example of the United Kingdom — where the rise in “cases” appears to be leading the one stateside by about three weeks.

On Tuesday, Parliament voted 369-126 to impose a vaccine passport in England — proof of vaccination (and boosters) to enter venues with large crowds such as nightclubs and stadiums. A separate measure requiring workers for the National Health Service to get the jab passed 385-100.

How these measures are supposed to curb doubling of Omigod “cases” every two–three days no one explains. But it comes back to the imperative for politicians to be seen doing something.

And as the independent journalist Michael Tracey says, actions in London are “the most significant harbinger yet of what’s to come in (parts of) the U.S.”

Here’s another harbinger, from closer to home… 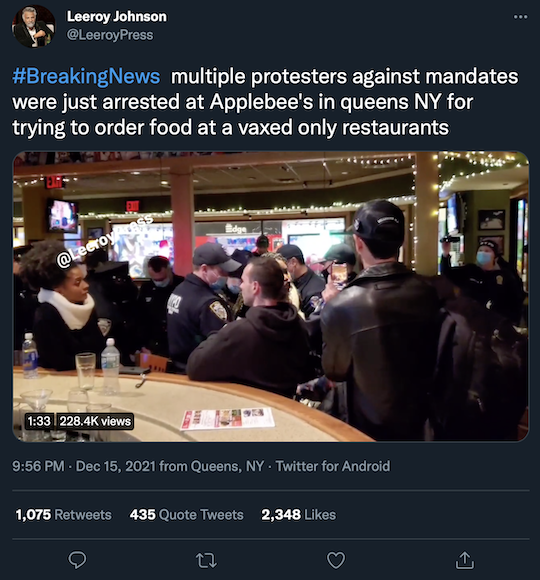 Effective Monday, every business in New York state is under orders to have every employee and customer show proof of full vaccination — or else make everyone inside over age 2 wear a mask.

Enforcement will be spotty — about one-quarter of county governments probably won’t bother with enforcement at all — but with 93% of New York adults having gotten at least one shot, it will also be ineffective at “slowing the spread.”

It will, however — coming back to our original point — potentially throw a blanket over economic activity at a time when many folks had assumed “the worst is over.”

On the subject of vaccine mandates, a reader writes: “I work for a defense contractor on an Air Force base.

“The Department of the Air Force as well as my company are still requiring vaccinations, or if one refuses, weekly testing. They had plans to implement it by a certain date but are accelerating it to tomorrow! They (the Air Force) is getting rather harassing and forceful on how they’re trying to coerce people. It’s sickening.”

The 5: You remind us the mandates have not been struck down for federal employees, either civilian or military — even as the mandates affecting private-sector employers appear set to go down in the courts one by one.

We raised an eyebrow this morning at this story from Military Times: “Following Oklahoma’s lead, five additional states are pushing back against the Defense Department’s COVID-19 vaccine policy, putting their objections in a letter addressed to Defense Secretary Lloyd Austin on Tuesday.

“The governors of Wyoming, Iowa, Alaska, Nebraska and Mississippi all signed onto the letter, asking Austin to lift his bar on unvaccinated Guard troops attending drill weekends or other mandatory training while in a federal, state-controlled status.”

Really, it’s a little freakish. I mean, we spun out an elaborate “civil war” scenario two years ago involving an armed confrontation between regular active-duty troops and the National Guard — set in Wyoming, no less.

Granted, the catalyst in our scenario was a deployment to the Middle East and not vaccines, but still…

“Thanks for shining some light on the attempted solar power grab in California. It’s even worse than it sounds!” a reader writes.

“I moved out of California last year after a decade of dealing with PG&E’s blackouts and choking smoke from wildfires they caused. And I work in the energy industry, heh…

“This latest attempt is being driven by PG&E and the other big investor-owned utilities (IOUs) in California that have a cozy, revolving-door relationship with the Public Utilities Commission.

“They already tried to get this passed over the summer under a new law (AB-1139). The IOUs would rather build their own large solar plants and sell the energy back to us at a hefty profit. But the solar industry raised hell in Sacramento with a mass protest including a motorcade of solar contractor trucks and a 30-foot-tall inflatable ‘utility profit grab’ Monopoly man outside the state capitol building. The bill failed. So now they’re trying to push this policy through the CPUC.

“And it gets worse. PG&E’s wildfire victims have gotten screwed and many of them have yet to receive any compensation. PG&E is literally a convicted felon and has pled guilty to multiple counts of manslaughter. Meanwhile, the hedge funds that received free shares of PG&E stock during their bankruptcy negotiations already dumped their shares and cashed out at $2 billion-plus.

“If this latest power grab to gut solar net metering passes, people are gonna be PISSED.”

The 5: Thanks for the backstory. What a colossal crony-capitalist fubar…