Omicron and “The New Normal”

“Expect more damage to the economy as resources are wasted in a vain attempt to achieve Zero COVID,” is how Jim Rickards concludes his weekly Monday update for Strategic Intelligence readers.

Marx’s maxim about how history repeats — first as tragedy, then as farce — seems eerily appropriate this morning.

Because there’s definitely a late February-early March 2020 vibe as we sit down to write: The media and the markets are in a full-on freakout about the “Omicron” variant of COVID-19.

Then as now, much of the apprehension stems from rising case counts in New York City — where the media and the financial industry are concentrated.

But that’s where the similarity ends.

Back then, we knew hardly anything about the “Alpha” version of the virus. Now, every indication is that Omicron is more transmissible, but also much less severe in its effects — which is the way most viruses evolve over time. That’s the case even in South Africa, where scientists first discovered the variant — and where only 26% of the population is fully vaccinated.

Thus, from the start, our procilvity to call it the “Omigod” variant.

Still, the market freakout is justified from one angle — the overreaction of politicians to rising numbers of “cases,” irrespective of hospitalizations and deaths.

What kind of restrictions will come back into force? And what impact will they have on commerce? (“Lockdown” has become a dirty word; The euphemism that’s being trial-balooned in Great Britain right now is “circuit-breaker.”)

The omens from the Old World are ill indeed. The Netherlands went back into full-on lockdown yesterday — despite 89% of the population being fully vaccinated. Also despite widespread protests that have taken place nearly every weekend against milder restrictions.

On a recent Friday night in Rotterdam, the cops responded by firing live rounds. Just another day of the “new normal,”it seems…

Tomorrow, the U.S. president delivers a big COVID speech. We promise you the message will not be, “Don’t panic.”

Beyond that, we’re not really sure what he can say that will be persuasive. The Zero-COVID obsessive Karens are in their camp… and the no vax, no way, no how people are in theirs. 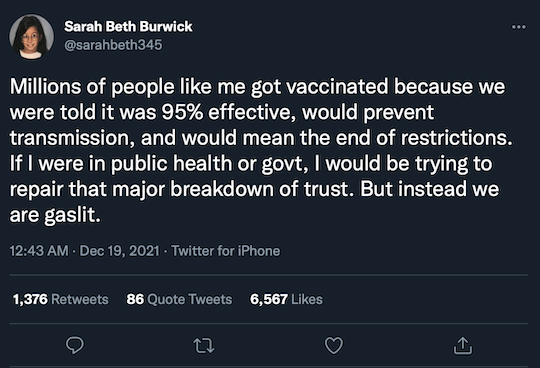 Perhaps the gaslighting she has in mind was what California Gov. Gavin Newsom said last week when reimposing an indoor mask mandate statewide: “The overwhelming majority [of Omicron cases] have been fully vaccinated. That’s why masking becomes even more important in this environment.”

Or maybe the president’s remark in July still sticks in her craw: “You’re not going to get COVID if you have these vaccinations.”

And then there’s the vaccine mandate mess in the courts — after a shock ruling less than 72 hours ago.

Imagine the conundrum at, say, Boeing: On Friday, the company dropped its vaccine mandate for employees.

No point in proceeding, the suits figured, not after a federal court blocked the Biden administration’s mandate for federal contractors. About 8% of BA’s workforce had yet to get either a shot or an exemption.

Hours later, on Friday night, a different federal court reinstated the separate mandate applying to all private companies with 100 or more employees.

So far, no comment from Boeing as we write today.

Both mandates will likely end up at the Supreme Court. A third mandate applying to health care providers that take Medicare/Medicaid money is already there. Rulings presumably will come soon, because all three mandates have a compliance deadline of Jan. 4 — two weeks from tomorrow. 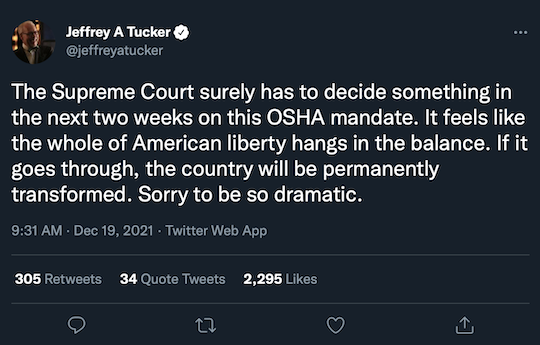 Our colleague Mr. Tucker is not being overly dramatic if you examine the ruling reinstating the 100-plus employee mandate.

Its author is Judge Jane Stranch of the 6th U.S. Circuit Court of Appeals, an Obama appointee.

Gaslighting abounds throughout Stranch’s opinion, starting with this assertion: “…the ETS [emergency temporary standard] is an important step in curtailing the transmission of a deadly virus.”

Even the vaunted “public health” bureaucracy gave up on that line months ago. CDC Director Rochelle Walensky on CNN, Aug. 5, 2021: “With regard to severe illness and death — [the vaccines] prevent it. But what they can’t do anymore is prevent transmission.”

(The word “anymore” was doing some heavy lifting there, but we’ll let that go.)

In a concurring opinion, Dubya Bush appointee Judge Julia Smith Gibbons engaged in her own gaslighting — saying it’s not the place of the courts to second-guess the Occupational Safety and Health Administration.

“Reasonable minds may disagree on OSHA’s approach to the pandemic, but we do not substitute our judgment for that of OSHA, which has been tasked by Congress with policymaking responsibilities.”

Oh, yeah, Congress. Really, did the Congress that set up OSHA in 1970 delegate powers this sweeping to any executive-branch agency?

And in any event, one house of Congress in 2021 is on record in opposition. On Dec. 8, the Senate voted 52-48 to overturn the 100-or-more-employees mandate; Democrats Joe Manchin and Jon Tester crossed the aisle to join the Republicans. Does that not count for anything?

Not in the 6th Circuit and not in the “new normal,” it doesn’t.

Which brings us to this passage from the first paragraph of Judge Stranch’s opinion: “Recognizing that the ‘old normal’ is not going to return, employers and employees have sought new models for a workplace that will protect the safety and health of employees who earn their living there.”

Well, now, this brings new meaning to “legislating from the bench.” Who gave this court the authority to declare “the ‘old normal’ is not going to return”?

Then again, perhaps Judge Stranch is merely giving voice to what the power elite have decreed from the get-go anyway.

The expat American writer C.J. Hopkins — living under a “lockdown of the unvaccinated” in Berlin — penned a year-in-review article at Substack, laying out the “new normal” in bald and profane terms, which we (sort of) preserve here because the f-bombs feel integral to Hopkins’ wordsmithing…

“As I assume is obvious to everyone by now, the ‘Return to Normal’ was a ‘Return to the New Normal,’ which the global-capitalist ruling establishment was already imposing on the entire world.

Back to Jim Rickards’ warning of “even more damage to the economy” — which is twofold.

First, there’s the damage from new/old restrictions: Imagine if the governors of California and Illinois impose, say, revived capacity limits in sports stadiums. If a blue-collar worker is told it’s not safe to see an NBA game, how safe will he think it is to go to work at the Port of Los Angeles, or a rail terminal in Chicago?

Yeah, you think the supply-chain snags and rising prices are bad now?

Then there’s the potential damage if the vaccine mandates are upheld in court — and a critical mass of people decide to walk away from their job before they get the jab.

And the pandemic response is just one thing on Jim Rickards’ mind this week as he prepares for a live Zoom call he calls “Countdown to Crisis.”

He’ll pass along several must-know warnings when the call gets underway this Wednesday at 1:00 p.m. EST.

You’ll need to sign up in advance for this one. It takes only seconds; all we need is your name and email address. Here’s the link.

As the day wears on, the freakout is accelerating — all the major U.S. stock indexes down around 1.75%.

Let’s get straight to the mailbag, where a reader’s inquiry on Friday stirred up the proverbial hornet’s nest.

“Dave, thanks for including the letter from a subscriber in Friday’s 5. It’s nice to know that The Final Solution is still alive and well and festering in the hearts and minds of some.

“I’d be remiss if I didn’t point out to your contributor that it’s not because the idea is controversial that it isn’t being widely discussed in the media. The reason is we already discussed it in great detail back in the mid-’40s and later. Maybe you missed it. It was in all the papers. But who knows, maybe it will take hold again if enough of you volks can get together on the same page.

“Then you can work to change the promise of ‘Never again’ to something catchier, like ‘Just this once more, and then never again, we promise.’”

“Dave, love your response to the ‘triage the unvaxxed.’

“Those who support ‘Medicare for All’ and ‘Health care is a Right’ seem to want to deny those same rights they are fighting for to a large segment of Americans. Classic!”

One more: “Mr. Triage conveniently misses one very important demographic group: what about the vaccinated people who get COVID and its variants?

“MSM statistics are one thing, but my personal observations (observations from friends, colleagues, etc.) in NJ are that at least half the people getting COVID are in fact vaccinated.

“But what do I know? … We are all fascists now and Big Pharma is the winner. Keep on keeping on, 5!”

The 5: As we go to virtual press… the news is that the governor of our firm’s home state, Maryland, has tested positive. He’s fully vaccinated and boosted.

As we said more than three months ago, “protect yourself” and “protect others” are no longer practical justifications for a mandate (leaving the moral considerations aside).

So the only remaining practical justification is to keep the hospitals from becoming overwhelmed… and in South Africa, the hospitalization rate is plunging.

At this rate, pretty soon that lawyer in LA is going to start wondering if this giant hairball was ever about “public health”… or rather about the imposition of a “new normal.”