“You can continue to grow your wealth in 2022 even though different stocks will be leading the market forward,” says our income investing specialist Zach Scheidt.

Zach picks up where our tech maven Ray Blanco left off yesterday. Ray said technology will be a leader again in 2022… but the strength will be with companies already generating revenue, not pie-in-the-sky hopes and dreams.

Mr. Scheidt agrees: Inflation and the Federal Reserve’s response to it — even if that response is more jawboning than substance — “will have a major effect on which investments will give you profits in the year ahead.”

After all, “it’s taken a long time for the idea of inflation to sink in,” Zach explains.

“Over the last 10 years, inflation has been eerily absent and the Fed has even been concerned that we didn’t have enough inflation.”

No more. Inflation is mainstream news. Polling data in early December showed it’s an even bigger concern among voters than the virus.

“If you want to beat inflation and protect the purchasing power of your retirement account, there are a few key areas you need to be invested in,” says Zach.

Begin with tangible goods. That means “equipment companies, stocks of companies that mine raw materials and infrastructure plays.” Copper in particular is worth a look and Zach has a couple of names in mind that he reserves for readers of his Lifetime Income Report.

Then there are the regional banks. “Traditional banks do well when interest rates rise,” Zach reminds us. “And since Fed chair Jerome Powell has made it clear that the Fed’s target interest rate is set to rise this year, we can expect banks to grow profits in 2022.”

Better to stick with a name like Apple (AAPL), one of Zach’s longtime favorites. “It may not be as exciting as some other flashy cloud, artificial intelligence or machine learning concepts” — but it provides “the safety and reliability that investors want.

“Don’t shy away from tech stocks altogether,” Zach concludes. “But please protect your wealth and make sure you’re invested in the right tech stocks for today’s market.

“If you stick with these trends as the Fed shifts course, I’m confident you’ll grow your wealth.

More importantly, you’ll sleep much better at night knowing that your savings aren’t vulnerable to a sharp market correction.”

Did he say a sharp market correction? About that…

With the help of the aforementioned Apple reaching a $3 trillion market cap yesterday, the S&P 500 notched another record close.

As we write today, the S&P is pulling back slightly. In contrast, the Dow is adding to its own record close yesterday — less than 200 points away from 37,000. And in further contrast, the Nasdaq Composite continues to struggle, down nearly 1.7%.

In mid-2017, we spun what we called “a tale of two S&P 500s.” We cited research revealing how the five biggest companies in the index — at that time, Apple, Microsoft, Alphabet (Google), Amazon and Facebook — recorded annual gains of 57.3% during the previous four years.

In contrast, the 495 smaller companies in the index gained only 6.1% a year.

We suggested five ginormous companies can’t prop up the rest of the market forever. Sure enough, about seven months later the stock market entered a year of considerable turbulence. In 2018, the S&P 500 logged its first yearly loss in a decade.

Fast-forward to the present and here we are again. Toward the end of last year, we cited Goldman Sachs research that found only five companies accounted for a third of the S&P’s gains in 2021 — Apple, Microsoft, Alphabet, Tesla and Nvidia.

Additional numbers from Bianco Research going back to mid-March of last year find those Big 5 up 46.5%… with the other 495 stocks in the index rising a mere 14.4%.

If past is prologue, the second half of 2022 could be rocky.

Elsewhere in the markets, the big story is growing doubts about whether OPEC and Russia can deliver on their promises to step up oil production.

Oil ministers from those countries agreed today to stick to their schedule of production increases — a schedule set out last July. But actual production hasn’t kept pace with those nations’ ambitions since then, so why should it now? “A range of issues, including political strife and underinvestment in drilling, are holding them back,” The New York Timessays drily.

The big economic number of the day appears to be a victim of the Omigod variant.

The ISM Manufacturing Index for December rings in at 58.7. Yes, that’s well above the 50 dividing line between growth and contraction… but it’s the lowest reading in nearly a year, indeed lower than the lowest guess among dozens of economists surveyed by Econoday.

Timothy Fiore, chairman of the committee that oversees this monthly survey, says without the increase in COVID cases several components of the overall number would have been better.

It’s now apparent a major financial crisis was underway six months before the pandemic hit full-bore in March 2020… and the virus ended up serving as a convenient distraction.

Late last week the Federal Reserve disclosed just who was getting a total of $4.5 trillion in loans during the fourth quarter of 2019 — after the repo market had seized up.

“Repo” is short for repurchase agreement — a type of short-term loan that big banks and hedge funds rely on to finance their daily trading. When the market froze, the Fed stepped in with a series of emergency loans — to whom, exactly, was not disclosed at the time.

To be clear, this was the banks’ trading divisions that needed rescuing — which in theory aren’t entitled to Fed rescues. The Fed was set up as a lender of last resort to commercial banks that borrow and lend, not to Wall Street high rollers.

Again, $4.5 trillion in emergency loans during just three months in late 2019. The Q1 2020 numbers will come out in another three months.

And we still don’t know why the Fed felt compelled to step in and do something it hadn’t done since the 2008 financial crisis. From Day One, we never bought the official nothing-to-see-here explanation.

No, you haven’t seen these names and numbers anywhere in the financial press — even though this is publicly available data from the Fed, albeit two years after the fact.

We know about the names only because Pam Martens and Russ Martens at the Wall Street On Parade website are on the case.

“We’ve never before seen a total news blackout of a financial news story of this magnitude in our 35 years of monitoring Wall Street and the Fed,” the Martenses write.

“The majority of the reporters who covered this Fed story at the time it was happening in 2019 are still employed at the same news outlets. We emailed a number of them and asked why they were not covering this important story. Silence prevailed.”

Even the reporters who’d moved on from major outlets didn’t want to speak up. “Can’t comment,” said more than one.

Write the Martenses: “The phrase ‘can’t comment’ as opposed to ‘don’t wish to comment’ raised a major alarm bell. Wall Street megabanks are notorious for demanding that their staff sign non-disclosure agreements and non-disparagement agreements in order to get severance pay and other benefits when they are terminated.

“Are the newsrooms covering Wall Street megabanks now demanding similar gag orders from journalists? If they are, we’re looking at a form of corporate tyranny previously unseen in America.”

One thing’s for sure: Establishment financial media are more and more useless in uncovering the stories that really matter. It’s up to independent players — folks like the Martenses and publishing firms like our own.

To the mailbag, where reaction is still coming in to our “best of 2021” series last week.

“Thanks for the long-winded piece about the ‘line in the sand’ on vaccine mandates and the class divide. How about the fundamental fact that vaccinated people are still getting COVID?

The 5: On Twitter this morning, we encountered a chart of new “cases” in the Canadian province of Newfoundland, where nearly 100% of everyone over age 5 has gotten at least one jab. 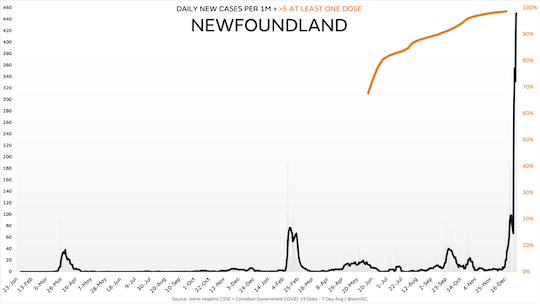 We’ve seen similar charts from other highly vaccinated places like Singapore. Usually there’s an accompanying quip: “They flattened the curve — but on the wrong axis!”