“This would mean potential cyberattacks on our grid and communication systems to prevent the U.S. from supporting the Ukrainian side [against Russia]…

“Understand that grid or communications disruptions also mean that you likely can’t get gas out of underground tanks and if you can, you likely can’t use your debit card to pay, so keep your cars full and carry a little extra cash.”

If you peek at a calendar, you’ll notice 30 days have already come and gone. Seventy-five days? That puts us at Feb. 22, shortly after the Winter Olympics wrap up in Beijing.

The proverbial “geopolitical tensions” involving Russia have a funny way of bubbling up around the Olympics.

Shortly before the 2008 Summer Games — also held in Beijing — Washington’s puppet leader in the former Soviet republic of Georgia invaded a rebel province, hoping to re-annex it. Georgian forces killed and wounded scores of Russian peacekeepers. As the games began, Russian tanks rolled into Georgia and quickly restored the status quo ante.

In 2014, with the Winter Games underway in Sochi, Russia, Washington engineered a coup in Ukraine — ousting a democratically elected pro-Russian leader. This event was high-fived a few days later on The Colbert Report during an interview with Gideon Rose, editor of the power-elite mouthpiece Foreign Affairs…

Rose: We want to, basically, distract Russia. Oh, look, you have the highest medal count, oh, you did really well…

Colbert: Here’s a shiny object, we’ll just take an entire country away from you!

Fast-forward to the present: “Clearly, this standoff at the moment — it’s as dangerous as the Cuban Missile Crisis in October 1962,” said Russia scholar Richard Sakwa from the University of Kent during a recent TV interview.

That’s not hyperbole — not when three days ago, the head of the NATO military alliance was speaking openly about a European land war. 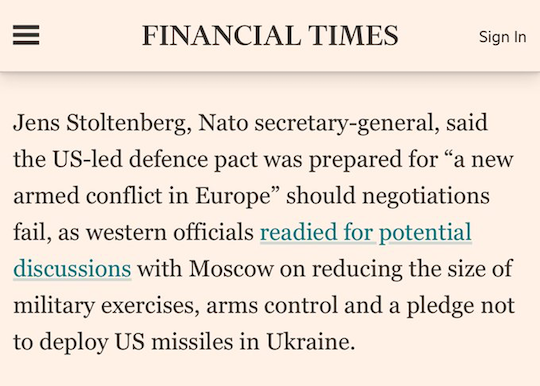 “A new armed conflict in Europe.” But for what, we must ask…

“The United States has no significant national security interest in Ukraine. A civil war has been internationalized into a geopolitical struggle,” writes Katrina vanden Heuvel — Washington Post columnist and widow of the great Russia scholar Stephen F. Cohen.

And yet… U.S.-Russia tensions over Ukraine have simmered for eight years since that 2014 coup. Among other developments, Donald Trump shipped lethal weaponry to the new Ukrainian regime — a reckless step Barack Obama refused to take.

About six weeks ago, establishment media started publishing alarmist stories about 100,000 Russian troops massed on the border with Ukraine, poised to sweep in at any moment. The stories were thin on supporting evidence, attributed to the usual anonymous “intelligence sources.”

President Biden and Russia’s President Putin have spoken twice since then — a video conference on Dec. 7 and a phone call on Dec. 30.

In between, Russia’s government issued a proposal to resolve tensions once and for all. Without getting into the weeds, Moscow’s endgame amounts to two demands…

From where we sit, these don’t seem like unreasonable demands. But we don’t circulate in the rarefied company of Pentagon planners, military contractors, three-letter agencies, think tankers and the foreign policy “blob.”

The core of the issue goes back to the end of the Cold War — and an unwritten pledge U.S. leaders made to Moscow.

Soviet leader Mikhail Gorbachev agreed to the reunification of Germany — in exchange for a promise the NATO alliance would not expand eastward toward Russia.

At the time, NATO had 16 member nations. After three decades of broken promises, that number today is 30.

A couple of the most recent additions don’t show up on this map from The Washington Post… but we share it because it best illustrates why Russian leaders are so unnerved by the prospect of Ukraine joining NATO. 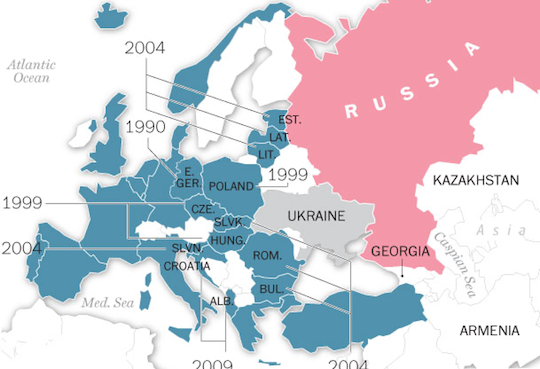 “Do we believe Putin will indefinitely accept the encirclement and containment of his country by nations united in an alliance created to keep Russia surrounded?” asks syndicated columnist Pat Buchanan this week.

“How would we have reacted if, after losing the Cold War, we were treated to Russian warships on Lake Ontario and Moscow giving Canada war guarantees?”

“Instead of ramping up military aid to Ukraine and allowing loose talk about Ukraine joining NATO, Biden could call for a joint guarantee of Ukraine’s independence and neutrality,” says Katrina vanden Heuvel.

There’s already a proven model for this idea, says our own Jim Rickards.

“This is what Austria was during the Cold War,” Jim said this week in a briefing for Strategic Intelligence readers. “Austria was not in NATO at the time.” [Still isn’t, matter of fact.]

“It was, I would say, culturally, religiously and politically pro-Western, but they had to maintain neutrality to avoid either being absorbed behind the Iron Curtain, absorbed into the Soviet Union’s sphere of influence. They couldn’t be fully Western, even though culturally, they were.”

At the very least, the temperature over Ukraine is cooling down for the moment — despite more alarmist media headlines.

U.S. and Russian diplomats are meeting today in Brussels, following up on meetings Monday in Geneva. Mainstream takes after the Monday sessions used words like “impasse” and “deadlock.”

So far, on the topic of NATO expansion, that appears to be the case. But on the equally crucial topic of stationing missiles on Ukrainian territory, there was progress.

In fact, that progress goes back to the Dec. 30 Biden-Putin phone call. According to the Russian readout of that discussion, “Biden emphasized that Russia and the U.S. shared a special responsibility for ensuring stability in Europe and the whole world and that Washington had no intention of deploying offensive strike weapons in Ukraine.” [Emphasis ours.]

The lead U.S. negotiator Wendy Sherman said as much on Monday — even though it was buried in The New York Times’ account: “The American side raised ideas about where U.S. and Russian intermediate-range missiles are located, Ms. Sherman said, and the United States made clear that it is open to discussing ‘ways we can set reciprocal limits on the size and scope of military exercises and to improve transparency about those exercises.’”

That’s huge progress according to Ray McGovern, who was the CIA’s top Soviet analyst during the 1970s and ’80s: “In due course,” he writes for Antiwar.com, “one can expect a sizable Russian troop withdrawal from areas near Ukraine.”

Alas, U.S. diplomats and even the U.S. president don’t necessarily have the final say.

For one thing, there are hotheads in Ukraine who might want to stage a provocation against Russia — the better to drag America into their conflict. Some of them are honest-to-God neo-Nazis, as we laid out in early 2015.

For another thing, elements of the “deep state” have been undermining elected presidents for the last 75 years, as we detailed during the first Trump impeachment saga.

It’s an incident from Obamatime that comes to mind this morning: Amid a raging multisided war in Syria, President Obama threw his support behind a cease-fire brokered by U.S. and Russian diplomats, announced on Sept. 10, 2016.

The attack was passed off as an “accident” — in the official telling, the real target was ISIS, which wasn’t a party to the agreement. But the military had already shown its hand: As a remarkable New York Times account related after the cease-fire and before the attack, “Pentagon officials refused to say whether they would comply with their part of the deal.”

Another “accident” now… and who knows what hell might be unleashed?

Yes, the investment implications are enormous. We’ll tackle that tomorrow with the help of Jim Rickards. We’ll also tease out how the conflict could end with the U.S. dollar losing its role as the world’s reserve currency. (Spoiler alert: It very nearly happened once before, in late 1979–early 1980.)

It’s time for the government’s monthly inflation numbers, and they rang in about as expected — which is really bad.

The consumer price index rose 0.5% month over month… and 7.0% year over year.

An official inflation rate of 7% is the hottest since June 1982 — the month when (seeing as we have apocalypse on the brain today) 750,000 people converged on Central Park in New York for a nuclear disarmament rally. Bruce Springsteen and Linda Ronstadt were among the headliners.

What a difference a year makes, huh? 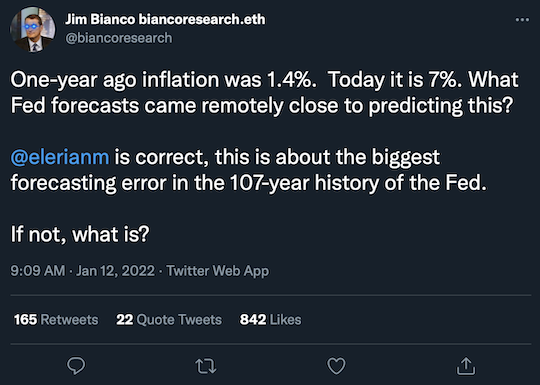 As always, any resemblance to your own cost of living is purely coincidental. The real-world inflation rate from Shadow Government Statistics — running the numbers the way the government did during the Carter administration — is now 15.2%.

For point of comparison, the high-water mark set during Carter’s time was 14.8% in March 1980.

Not that the stock market seems to care: The major U.S indexes are all in the green, if barely.

Crude is up big — again — after the weekly inventory numbers from the Energy Department. At last check, a barrel of West Texas Intermediate has added 2% to $82.81 — the highest in nearly two months.

Meanwhile, an update on the vaccine mandates… 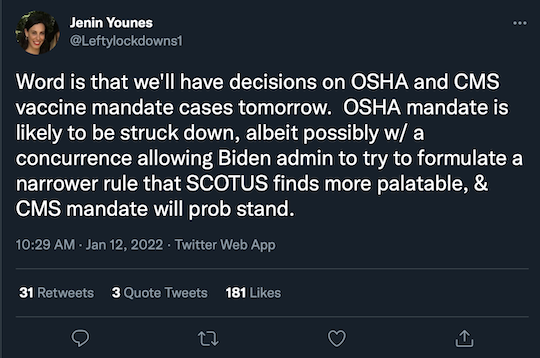 OSHA is the mandate applying to all companies with more than 100 employees. CMS is the one applying to health care providers taking Medicare/Medicaid money.

Last September, “a Taycan Cross Turismo… entered the Guinness World Record books after setting a new benchmark for the greatest altitude change ever achieved by an electric car,” according to a press release out this week from Porsche.

A team of drivers was led by J.F. Musial — best known for producing automotive TV shows like Off the Grid and Drive. “We wanted to drive from the lowest point in America to one of the highest, Pikes Peak — where we’ve spent countless hours filming the famous hill climb.”

The lowest point in this case is not — despite what you learned in grade school — Death Valley.

No, they descended to the depths of Lundin Mining’s nickel-copper mine here in Michigan’s Upper Peninsula — the Eagle Mine, 1,774 feet below sea level — with the help of a ramp usually reserved for mining vehicles. 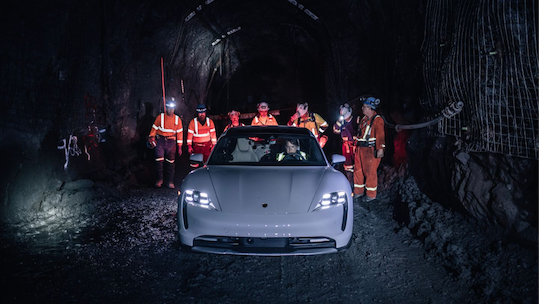 But it was a nail-biter at the end. “Despite an incoming snowstorm,” says Musial, “we got lucky and found a small 45-minute window to get to the top — the mountain let us get this record.” 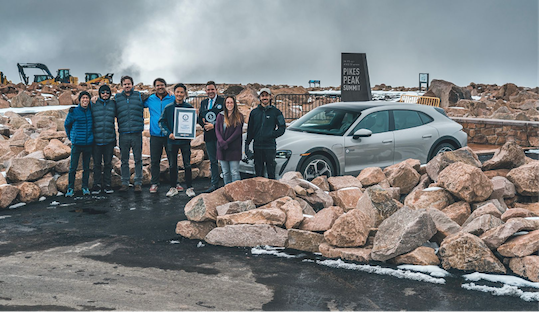 The view from the top. [Porsche photos.]

The choice of Eagle Mine as a starting point was appropriate for another reason: “It’s the only currently operating nickel mine in the United States,” says The Detroit News, “and provides critical minerals for electric vehicle batteries, which the auto industry is pouring money into developing.”

All around, an impressive stunt…