“The horrible possibility exists that Americans, with our European allies, must use our military to roll back Russians — even at risk of direct combat,” says one Evelyn Farkas.

Ms. Farkas is a card-carrying member of the national security establishment — deputy assistant secretary of defense under Obama, talking head on MSNBC, fellow at the Raytheon- and Lockheed-funded Atlantic Council.

From her well-appointed ivory tower, she coolly proposes that young people from impoverished small towns and inner cities must fight and die for the sake of — Ukraine!?

Twenty-four hours ago, it seemed to us there was a reasonable likelihood that a land war in Europe could be headed off. Today, we’re less sure.

U.S.-Russia talks Monday got off to a promising start. But during yesterday’s round, it became clear Washington simply will not give in on one of Moscow’s key demands — that Ukraine be kept out of the U.S.-led NATO alliance.

For Russians, keeping Ukraine as a “buffer state” on its western frontier is an existential issue. For everyday Americans struggling to get by, the matter is of no consequence at all. But for the American power elite, their precious “credibility” is at stake — along with a raft of juicy new military contracts.

Vladimir Putin launching an invasion of Ukraine? It’s something “he is likely to do absent meaningful concessions,” writes Cato Institute scholar Doug Bandow.

Our own Jim Rickards agrees. “Integrating Ukraine fully into the Western alliance, that’s just a bridge too far,” he said Monday during his monthly live briefing with Strategic Intelligence readers.

“That’s something that Putin’s not going to allow, and if you were Putin, you wouldn’t either because it really jeopardizes, certainly threatens, Moscow in a way that puts any [Russian] political party, Putin or any other party kind of at the mercy of the West.”

“Given Ukraine, and that’s just one of many hotspots we’ve been talking about — China, Taiwan, Syria, the Middle East and many others — yeah, I would say that the sector’s been beaten down.”

Names to consider include Lockheed, Northrop Grumman and Leidos. The last of those three might not be familiar, “but they’re an intelligence community contractor,” says Jim, “and intelligence is a little more of a black budget. But that’s going to expand as well. So yeah, there are really good opportunities in that sector.”

Likewise, a land war in Europe would boost energy stocks — at a time when the move toward “greener” energy has left them unloved by Wall Street.

Whether it’s to get leverage over Ukraine or for some other reason, Russian gas flows to Western Europe have slowed to a trickle in recent weeks. Thus, “in Europe, natural gas has skyrocketed,” Jim says.

Meanwhile, “liquefied natural gas, the technology in terms of shipping it, is improving. The LNG carrier fleet is expanding and is working on a major, major deal: a 10-year take-or-pay contract with China to basically send all their natural gas to China.

“So there are a lot of forces driving the price higher anyway, but you put this Ukraine situation on top of it? We expect that. So yeah, we’d be looking at some good picks in that sector.”

Now let’s step back and take the rest of our 5 Mins. today to tease out some bigger-picture financial consequences…

Going into the U.S.-Russia meetings on Monday, U.S. officials were talking about imposing what amounts to the financial death penalty on Russia in the event of a Ukraine invasion.

Now, if you’ve been reading us for a while, you realize the Russians have given themselves a reprieve from that death penalty.

Really, it’s a get-out-of-jail-free card — as Jim reminded his Twitter followers only days ago… 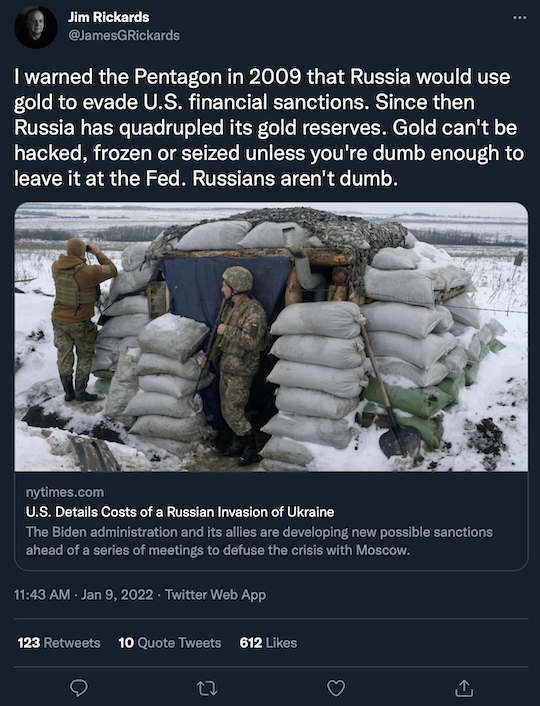 Russia’s gold stash, measured as a percentage of its economy, is the biggest in the world. It frees Putin’s hand in a way Western leaders can’t conceive. 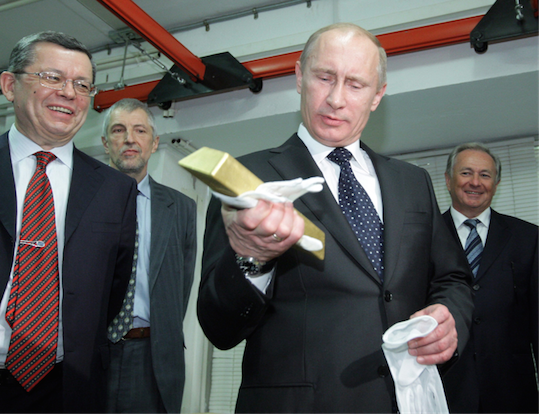 “Cut us off from SWIFT? And from dollars, too? Come at me, bro…”

Only the story wouldn’t end with Russia. It might spell the end of the dollar as the globe’s reserve currency.

Which brings us to some recovered history…

Few people think of it this way, but the dollar had a near-death experience just over 40 years ago.

To break the back of inflation, Jimmy Carter appointed Paul Volcker as chairman of the Federal Reserve.

On the evening of Oct. 6, 1979 — a Saturday — Volcker imposed a shock interest-rate increase. He jacked up the discount rate a full percentage point to 12%.

The “Saturday Night Special,” as it went down in financial history, featured prominently in Volcker’s obituaries a couple years ago.

“He prevailed by delivering shock therapy,” said The New York Times, “driving the economy into a deep recession to persuade Americans to abandon their entrenched expectation that prices would keep rising rapidly.

“The cost was steep. As consumers stopped buying homes and cars, millions of workers lost their jobs. Angry homebuilders mailed chunks of two-by-fours to the Fed’s marble headquarters in Washington. But Mr. Volcker managed to wring most inflation from the economy.”

The media’s obits made it sound as if the Saturday Night Special was more or less the end of the story. In reality, it was only the beginning.

The next month, November, brought the Iran hostage crisis. The Carter administration froze Iranian assets in the United States. Not that that mattered to the students who took the hostages in the U.S. embassy; it wasn’t their money, after all.

“As the world watched and waited, other foreign investors began to wonder about the safety of their money,” writes Richard Maybury, one of the graybeards of the newsletter biz, in his book The Money Mystery. “What might happen to my money, they asked, if my government does something to anger the American government? Will my money be frozen, too?

“A run on the dollar began,” Maybury continues, “first among wealthy Arabs whose governments were not on good terms with U.S. officials, then among wealthy persons worldwide.”

They dumped their dollars in favor of Swiss francs, West German marks and especially gold.

The following month, December, brought the Soviet invasion of Afghanistan. The Carter administration responded with a grain embargo. “Around the world, people began to fear that U.S. officials would pressure their allies into freezing all Soviet bloc assets.”

At the time, Soviet-bloc debt to Western banks totaled $80 billion. “With financial markets already in turmoil, an $80 billion default hitting dozens of large banks worldwide could set off a global bank run and financial crash every bit as bad as 1929.”

The only way to prevent a collapse of the dollar was to jack up interest rates and dial back Fed money printing far more than Volcker probably intended in October. Mortgages of 16% couldn’t have been the plan from the beginning!

The pain from his actions was enormous, but the pain of not acting would have been far worse. (Hollywood took a stab at the worst-case scenario in the 1981 movie Rollover with Kris Kristofferson and Jane Fonda.)

Now ask yourself: How likely is it today that a Volcker-like figure will emerge during a similar dollar crisis — brought on this time by U.S. sanctions punishing Russia for an invasion of Ukraine?

Rewind to Washington’s regime-change op in Ukraine and Russia’s annexation of Crimea in February 2014. Washington quickly imposed sanctions in March. In May we chronicled how Russian officials convened what they billed as their first “de-dollarization” meeting with officials from China.

That summer, President Putin and President Xi signed a $400 billion natural gas deal that, by most accounts, was executed using yuan and rubles — not the world’s reserve currency, the dollar.

Fast-forward to the present and “the global share of U.S. dollar-denominated exchange reserves declined to 59.15% in the third quarter,” writes financial blogger Wolf Richter at his Wolf Street site. Here’s the trajectory going back to those early de-dollarization meetings in 2014. 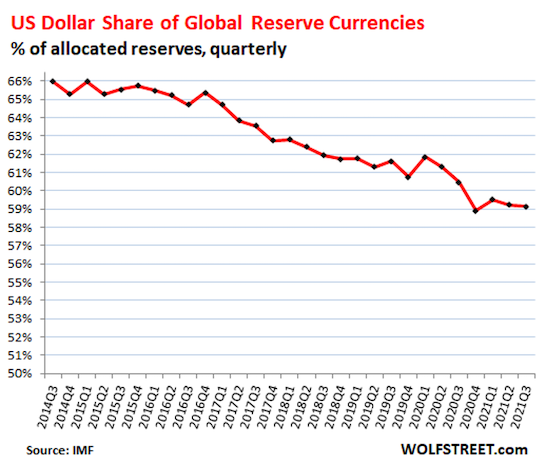 This de-dollarization process has moved at evolutionary speed. But if Washington kicks Russia out of SWIFT and denies Russia access to dollars altogether?

Then the speed becomes revolutionary — as happened in 1979 when the dollar plunged from nearly 85% of global reserves to under 60% in a heartbeat.

The pieces are all in place…

What to do? Gold would surely serve as a haven now as it did in 1979. Again, the Midas metal more than doubled in a little over three months into the January 1980 blowoff top.

And probably some Bitcoin as a hedge. Fidelity is out with a new report that doesn’t address Ukraine or de-dollarization per se… but does include this intriguing passage in the wake of El Salvador making Bitcoin legal tender alongside the U.S. dollar…

We also think there is very high-stakes game theory at play here, whereby if Bitcoin adoption increases, the countries that secure some Bitcoin today will be better off competitively than their peers. Therefore, even if other countries do not believe in the investment thesis or adoption of Bitcoin, they will be forced to acquire some as a form of insurance. In other words, a small cost can be paid today as a hedge compared to a potentially much larger cost years in the future.

We therefore wouldn’t be surprised to see other sovereign nation-states acquire Bitcoin in 2022.

De-dollarization by another name, right?

P.S. Wrapping all this up where we began yesterday… we’re not too panicked at the prospect of the Russians trying to knock out electricity or internet if war over Ukraine breaks out. Seems like a good way to galvanize everyday Americans to take sides in a conflict where currently they feel they have no dog in the fight.

Now, knocking out the satellites that furnish GPS service? There the calculus might be different: The military value might outweigh the inconvenience to/anger of civilians.

Really, GPS has always struck us as an easy target. If you’ve become dependent on it, you might wish to re-acquire — or if you’re young enough acquire in the first place — the skill of navigation by way of paper maps. My wife and I keep maps of our region, our state and nearby states in both of our vehicles.

P.P.S. There’s nothing happening in the markets today that can’t wait till tomorrow. And we’re still awaiting word from the Supreme Court about the vaccine mandates.

Thanks for letting us wax at length about Ukraine, of all things, the last couple of days. Back to more “normal” business tomorrow.