“Omicron is almost too good to be true,” says our science-and-technology authority Ray Blanco. “It’s incredibly transmissible… and it’s not deadly.” Of course, if you’re a reader of The 5, you know Dave’s taken to calling it the “Omigod” variant for that very reason.

Ray continues: “If you were to engineer a COVID-19 strain that you would release out into the world and just forcibly vaccinate everybody against… bad strains, you couldn’t do better than Omicron.”

The reason vaccines don’t seem to be offering the immunity global policymakers promised? “When you get a vaccine, some are just single antigen vaccines. It’s just the spike protein,” he says. “The spike protein mutates a little bit, and the efficacy against the actual virus goes down.

“Now if you get exposed to the whole virus, you’re not just exposed to that spike protein antigen, you’re getting exposed to a bunch of other pieces of that virus,” Ray says. “And you’re developing a much more complete memory of it in your immune system.

“So with Omicron,” Ray says, “I think it’s endemic. We’re going to see this thing rolling around for a long, long time.” Ray’s already told his loved ones that they will get COVID at some point. Plus, he’s personally resigned to that fact.

“But I think this might be the last big wave of the virus,” he says. “I’m hoping that it is. And if it’s not, we have to change the way we’re dealing with it because we just can’t live in the state of emergency for very long.

“So we’re starting to hear the regime changing their narrative now,” Ray notes. “The masks didn’t really help, the vaccine didn’t stop infection and transmission — although it helped with severe disease, so we’ve got to give it that.”

The powers that be? “Wrong about almost everything,” he says. “But these people can’t admit they’re wrong.” Not when Dr. Anthony Fauci is the highest-paid federal employee for three years running…

“I think most reasonable people would accept that during this unprecedented situation… mistakes were made. I would respect [them] for standing up and saying, ‘We’re sorry, we screwed up, we need to change our policy because this didn’t work.’”

But Ray’s not holding his breath… Instead, since the world of finance is his main preoccupation, he’s taking inventory of a beaten-down sector that’s poised for a comeback in 2022.

The underperformance of the SPDR S&P Biotech ETF (XBI), for instance, compared with the broader S&P 500 was around 50%. “Unbelievable,” says Ray. “But there were a variety of reasons for that.

“In February last year, XBI hit all-time highs… and has been downhill since.” One factor: “Democrats claimed the White House and Congress. They want… price controls on drugs, including price negotiations with Medicare/Medicaid, which is bad for a lot of drugmakers.”

Ray adds: “There’s the fact that it’s really hard to run clinical trials for cancer, let’s say, in the middle of a pandemic. It’s hard to recruit people. Unless you’re recruiting for COVID studies.

“And the COVID-19 investing hype ran out of gas,” he says, “and that didn’t just hit COVID-related companies. That hit the whole sector.” So… COVID fatigue all the way around.

“But I’m looking at XBI — those types of stock holdings — and I think they’ve got a lot of opportunities this year,” says Ray.

And he pinpoints one particular group, in fact: the gene-editing companies. “I’m talking about Sangamo Therapeutics, Editas Medicine and CRISPR Therapeutics.”

Ray concludes: “You should own some of these high-quality, small biotechs, and pay attention to gene-editing companies. I think they could outperform this year.”

[Ed. note: Ray’s a credible source too, considering he recommended his subscribers buy shares of a tiny EV upstart when its stock was priced at just $4.14. That tech startup? Tech giant Tesla.

Now Ray believes Tesla’s co-founder Elon Musk is on the brink of an announcement that might revolutionize the EV industry. Again. And it has everything to do with the driving force behind green energy.

But the best time to invest in one key company — which holds the patent on this transformational technology — is before Jan. 26… when Musk takes the stage at an investor conference.]

But crude oil has hit another seven-year high: A barrel of WTI is up 2.25%, selling for $87.37 — a price not seen since 2014. The media are chalking up this latest surge to a fire along the Kirkuk-Ceyhan pipeline, which carries crude from the second-largest OPEC producer, Iraq, to the Turkish port of Ceyhan. Output has since been restored.

“Oil’s rally may extend further in the next few months due to recovering demand and limited capacity in OPEC+ to add supply… Prices could break $100 a barrel,” says Reuters. Ugh…

“Real estate market dynamics continue to be defined by the imbalance between a large demographic wave of millennials driving demand and an undersupply of new homes,” says George Ratiu of Realtor.com.

Millennial homebuyers are trying to lock in low mortgage rates (while they still can). “However, with rising lumber prices and worker wages compounding increasing rates, the cost of new homes is… on an upswing,” Mr. Ratiu says.

“For the last 18 months, many of the most spectacular stock returns have been driven by enthusiastic investors with no experience in the stock market,” says our retirement-and-income specialist Zach Scheidt.

“Don’t me wrong,” he says. “I’m not upset about this trend. It’s part of the typical greed and fear cycle that we see in markets time and time again.

“But given the amount of government stimulus, unparalleled access to the stock market, leverage that was offered to inexperienced traders and our always-connected social media culture… things got a little out of hand.”

The upshot? “Some of the most popular stocks included… companies that didn’t have a hint of when they might produce a profit.” In particular, Zach spotlights cloud computing, AI and EV companies with Big Tech aspirations and little else.

“As investors gobbled up shares… speculative investments soared. Meanwhile, old-fashioned companies that generated profits and had stable, reliable businesses were put out to pasture…”

But now investing newbies have fallen on hard times as seasoned investors gravitate toward value. Just take a look at two charts…

“The first is a chart of the Vanguard Growth ETF (VUG), packed with speculative stocks that may (or may not) live up to the expectations rookie investors had,” says Zach. 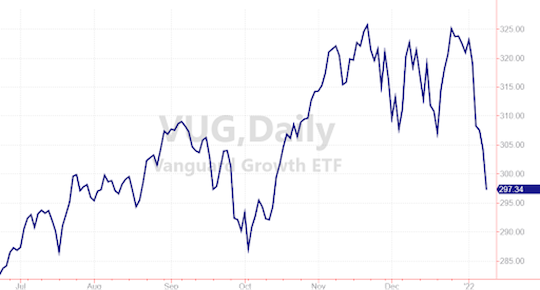 “As you can see, growth stocks sold off sharply in 2022 after plenty of volatility in December,” Zach continues.

“Now check out the chart for the Vanguard Value ETF (VTV),” he says. “This fund is full of value stocks: companies that generate profits and have cheap stock prices compared with earnings. 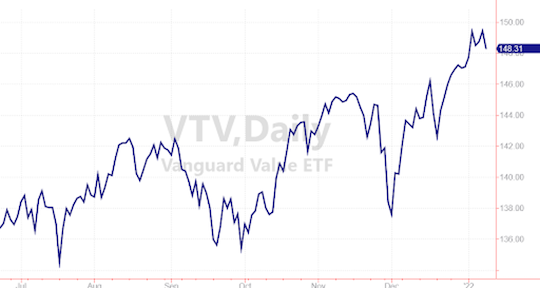 “Value stocks have held up just fine during the January sell-off,” Zach says. “You might also notice that VTV is still near an all-time high even though these stocks have been largely ignored by inexperienced investors.

“Which would you rather be invested in right now?” he asks.

“If you want to be invested in the strongest area of today’s market, simply pick stocks that are holding up well,” Zach says.

“Here’s a list of the top 10 holdings included in the Vanguard Value ETF (VTV). These are the stocks driving solid performance for this healthy group… 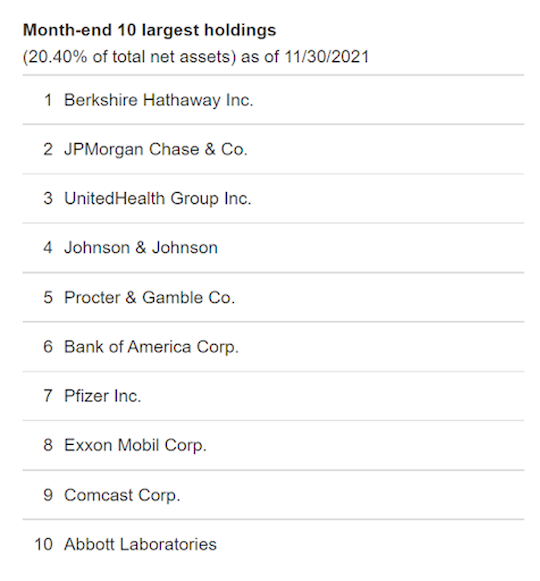 “Not every stock in this list deserves a buy rating,” Zach cautions. “And I was disappointed to see that VTVs top 10 only includes one energy company, Exxon Mobil Corp. (XOM).

“But the list is a great place to start finding stocks that are working right now,” he says. “And if you look at these stocks’ competitors, you’ll soon have 30–40 good candidates to consider adding to your investment portfolio.

“Sure, these names may not be as exciting as some speculative companies, but they will give you a better shot at locking in reliable profits even in today’s turbulent market,” Zach says. “And I didn’t even mention that many of these value stocks pay great dividends.”

“Major U.S. corporations are looking to quietly restore ties with Republicans who objected to certifying the 2020 election results,” says an article at The Hill.

“The worm has turned,” our macro expert Jim Rickards notes. “Republicans are well positioned to take control of the House of Representatives in the November 2022 midterm elections.”

The reason for recent bridge building? Jim says: “Many of the blackballed Republican members of Congress will end up with powerful committee chairmanships with regulatory power over key industries.” Ahh…

So we learn this week — per liberal watchdog group Accountable.US — companies and trade groups shoveled more than $8 million in PAC donations to GOP reelection campaigns since Jan. 6 last year, despite their public posturing.

“Another tally from left-leaning watchdog Citizens for Responsibility and Ethics in Washington found that companies that initially pledged to pause their PAC donations to the 147 Republicans have since given $2.4 million to those lawmakers’ campaigns and leadership PACs,” The Hill reports.

“Industry giants such as Boeing, General Motors, Raytheon Technologies, Altria Group and UPS rank among the top corporate PAC donors to those Republicans,” the article continues.

“Most of those checks are going to House Minority Leader Kevin McCarthy (R-Calif.), who is eyeing the speaker’s office, and House Republicans who would take control of key congressional committees if the GOP wins the lower chamber.”

That said, loud-and-proud planners of the Stop the Steal event last year — most notably Reps. Marjorie Taylor Greene (R-Ga.) and Andy Biggs (R-Ariz.) — are still considered a bridge too far for corporate donations. But excluding some of the GOP’s more fringe members, “just 13% of corporate PACs continue to pause donations” to Republicans.

But Democrat-leaning Leadership Now Project CEO Daniella Ballou-Aares avers: “If you’re a company that said that objecting to the election results is unacceptable, if you go back on it, that’s a problem. It shows that… there’s not a real stickiness.”

“It’s bad for business to have democracy floundering,” Ms. Ballou-Aares continues. “I fully believe that with a concerted effort, business leaders and companies could push back on what we’re seeing.”

Meaning? Corporate CEOs and their K Street lackeys should use all their clout (i.e., campaign contribution dollars) to resist Republican dominance.

Because nothing says “democracy” like corporate campaign contributions, right?