The IRS is taking “one more step” to “ensure that taxpayer information is provided only to the person who legally has a right to the data,” the IRS says.

Which, in theory, sounds like a net positive. Until you learn how the IRS plans to guarantee taxpayers’ privacy… When accessing child tax credit information, online payment agreements and tax account information, “taxpayers will be asked to sign in with an ID.me account,” the IRS says.

“To verify their identity with ID.me, taxpayers need to provide a photo of an identity document such as a driver’s license, state ID or passport,” the website says. “They’ll also need to take a selfie with a smartphone or a computer with a webcam. Once their identity has been verified, they can securely access IRS online services.

“People who already have IRS usernames may continue to use their credentials from the old system to sign in until summer 2022, but are prompted to create an ID.me account as soon as possible,” says the IRS.

And we’re rather surprisingly on the same page as the ACLU. Like, mostly… 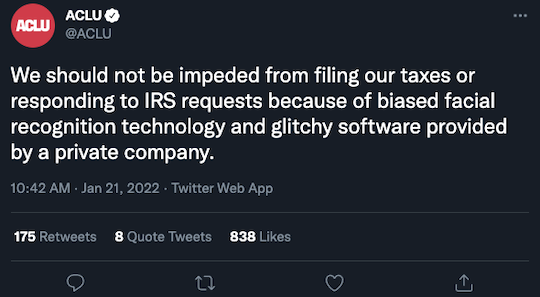 Headquartered in the deep state’s environs — McLean, Virginia — “[ID.me] provides identity proofing, authentication and group affiliation verification for organizations across sectors,” the company says in a press release, with “technology [that] meets the federal standards for consumer authentication.”

ID.me claims its facial-recognition capabilities ferret out fraudsters like these… 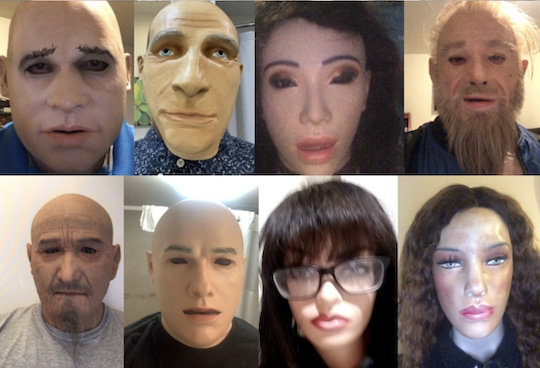 Heh… Hope you’ve recovered from that waking nightmare. How about more on taxes?

As messed up as 2021 tax filing is going to be — what with unemployment benefits, child tax credits, stimmy payments and an IRS backlog of about 8 million filings — things just got even thornier.

“Democrats are considering allowing a larger deduction for state and local taxes in 2021 than the $10,000 cap now in the law,” The Wall Street Journal says.

“That proposal is tied up in the stalled Build Back Better legislation,” the article notes. “The longer that is delayed, the less likely it is to be retroactive to 2021, but affected taxpayers might consider waiting to file their returns.”

Here’s a thought: Can you imagine the number of people filing early to collect refunds… and then having to do an amended return if it passes, say, in mid-March?

Also, amended, in many cases, would equate to itemizing instead of taking the standard deduction. And the percentage of filers who itemize collapsed dramatically post-2017… 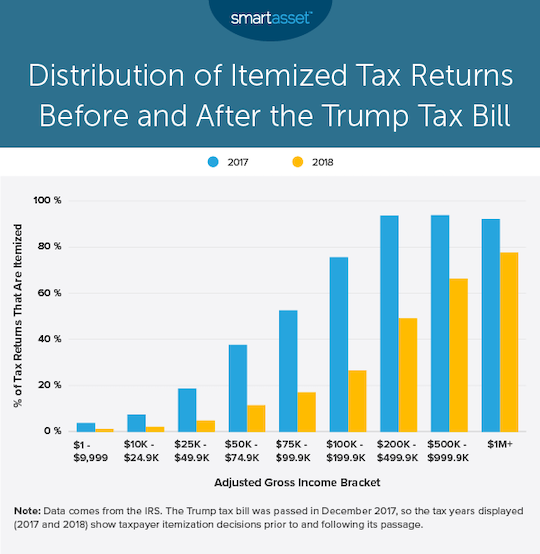 Which ought to jam up the IRS — and taxpayers! — even further. File early? File late? It’s a coin toss, folks. But we wouldn’t count on that tax refund (if you get one) anytime soon…

“But stock market bulls heard none of that,” Dan says. “Instead, Powell was crystal clear that the Fed sees the U.S. economy as much stronger than it was in December 2015 — that was the last time it launched a rate hike cycle. To emphasize the point, at the end of the Q&A session, Powell repeated that the Fed views the labor market as strong.

“The most frightening thing to stock market bulls was Powell’s statement that asset prices (meaning stocks) are historically elevated, and that if stocks were to fall further, the Fed believes it would not have much impact on the real economy.

“This statement is unlikely to age well,” says Dan (dryly).

“The U.S. economy is more influenced by stock and housing prices than it has ever been in the past,” he continues.

“History shows the Fed is slow, bureaucratic and rarely aware of the impacts its actions have on stocks and investor psychology. So the odds of a Fed policy error are high.

“My colleague Jim Rickards sees rising odds of a Fed policy error. The Fed is tightening into a weaker economy. If Jim is right, the implications are that the Treasury yield curve would flatten or invert in 2022.”

Dan concludes: “Investors can prepare for a Fed policy error by raising cash; trimming tech, financial and cyclical stocks; and adding to less volatile assets like Treasury bonds, precious metals, select utilities and defense stocks — all of which benefit from worries that the Fed may tighten the economy into a recession.”

For the day’s major economic numbers (and more)…

Regardless, what a year Tesla had… 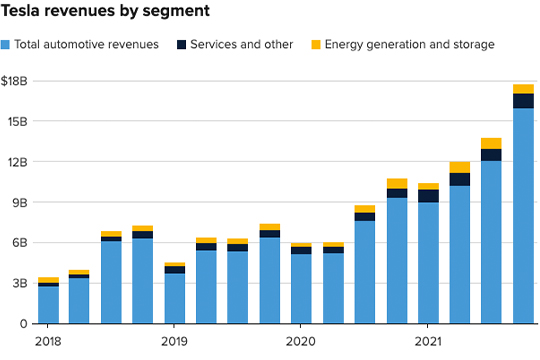 Nevertheless, CEO Elon Musk says Tesla is “chip limited” and will not be rolling out any new vehicle models this year.

“The Fed is finally stepping up to try and do something to reduce inflation,” says Zach Scheidt.

“Because inflation tends to pick up when interest rates are low, the reverse is also generally true. When interest rates increase, consumers have an incentive to save,” he explains. “With less money available to spend, the idea is that rising prices of goods and services will slow down as a result.

“This chart compares the relationship between the Fed’s interest rates and the Consumer Price Index, a general metric that tracks price changes…

If the calculus works, as the Fed raises interest rates, core CPI should reverse course. “And after Powell announced his policy pivot on inflation,” Zach says, “we’re sure to feel the ripple effects of these rate hikes throughout many sectors of the stock market and economy.

“One area in particular is going to be a direct and early beneficiary of the Fed’s fight against inflation: banks and other lenders,” Zach says.

“Put simply, banks are able to generate a higher yield on the large stores of cash they hold from business transactions and customer accounts. All that extra money goes straight to earnings,” he says. “And when interest rates rise, banks can also charge more interest on any new loans, leading to even more revenue.

“Banks have no shortage of potential customers who will want to take out a loan,” says Zach. “After all, companies can borrow money today to build bigger facilities, hire workers and grow their underlying businesses.

“Furthermore, most banks have plenty of cash on hand. That makes today’s environment an especially good time for banks compared with previous years when they’ve been over-extended.

“The banking industry is hitting new all-time highs at the start of 2022 even before any official change to interest rates,” he notes.

“The bottom line is that once the Fed starts its rate hikes this year, bank stocks should soar even higher as they rake in the revenue,” Zach says. “So before the industry fully takes off, let’s go ahead and capitalize on the opportunity.” 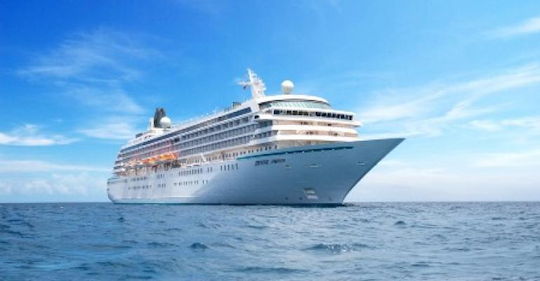 “A U.S. judge issued an arrest warrant ahead of the ship’s scheduled… arrival in Miami, meaning the ship would be seized by a U.S. marshal and court-appointed custodian.”

Instead, the cruise ship skedaddled to Bimini, Bahamas, where hundreds of passengers disembarked and were boarded onto a ferry bound for Ft. Lauderdale on Sunday. The ferry ride? “Uncomfortable due to inclement weather,” says a Crystal Cruise’s spokesperson. Ooh, boy…

“This end to the cruise was not the conclusion to our guests’ vacation we originally planned for,” the cruise line said. (In this context, it seems appropriate: Thanks, Capt. Obvious.)

Crystal Cruises has since announced it will suspend ocean-going operations through April as its parent company Genting Hong Kong enters bankruptcy. As for Crystal Symphony, according to CruiseMapper, it’s still chillin’ in the Bahamas.

“I liked the cartoon showing the difference between the left in the 1970s versus today,” a reader writes. So we reprise for your benefit… 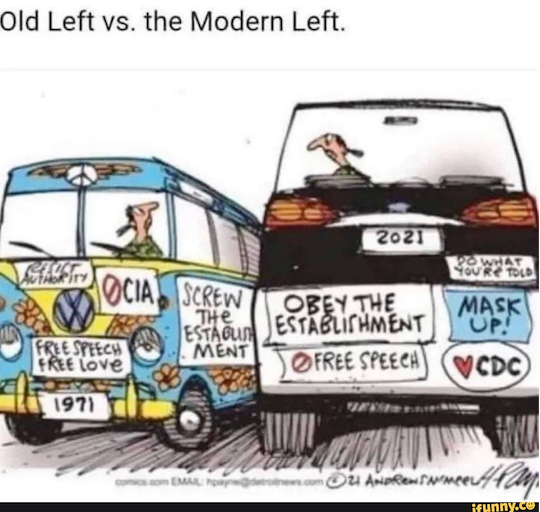 “But you could honestly say the same thing about the right. Starting with Clinton, accelerated on steroids with Obama and now practically carved into our DNA with ‘Grandpa Gropes’ is the concept of ‘I love my country… but hate the president.’

“Just can’t figure out how to draw that as a cartoon.”

Oh, we’re sure there are some talented artists and graphic designers among our readership who could do a more-than-passable job. One suggestion? Pickup trucks.

Hang in there… We’ll be back with more of The 5 tomorrow.