We have a new spin this morning on one of our long-standing complaints.

For lo these many years, we’ve looked askance at the economic measurement known as gross domestic product — the most commonly cited number representing “economic output” or “the economy.”

Our biggest beef with GDP is that it’s a nigh-meaningless statistical abstraction. It has zero relevance to your life or your standard of living.

To illustrate its silliness, we never get tired of citing this example, courtesy of Agora founder Bill Bonner: If you mow your lawn and your neighbor mows his lawn, there’s no effect on GDP. But if you mow each other’s lawn and pay each other $30 to do so, GDP miraculously grows by $60!

But still, politicians and policymakers — Republicans, especially — are obsessed with it. Wall Street, too: When the Commerce Department issues its latest guess on fourth-quarter GDP tomorrow morning, will it be higher or lower than the original guess a month ago?

Serious people actually obsess over such questions. Really, how many terabytes of internet bandwidth get wasted on “news” like this? 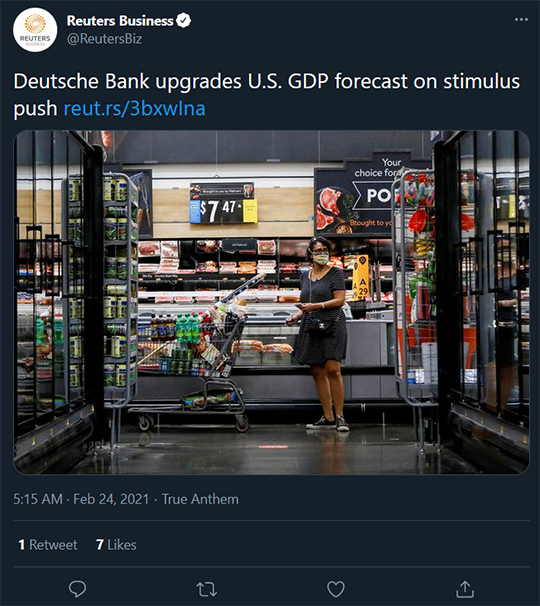 But even if you take it at face value, there’s a huge problem with GDP.

Let’s back up a moment. You might think the number is calculated in some crazy-complicated way. But really, the formula is super-simple… 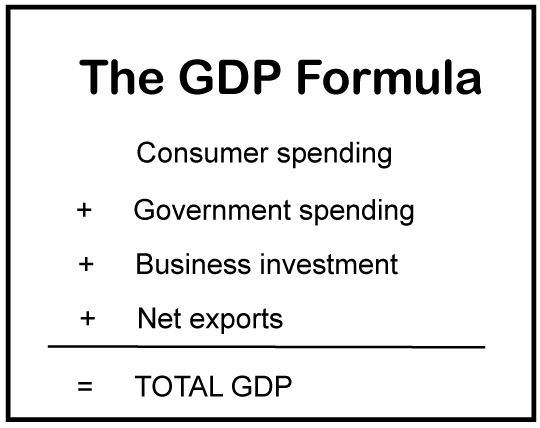 Again, simple. The only complication is that if a country imports more goods and services than it exports — which the United States does — then “net exports” winds up subtracting from the total.

Dr. Skousen is one of the greybeards of the newsletter business — along with other 70-something stalwarts like Doug Casey, Richard Maybury and, of course, Bill Bonner. Mark’s been publishing his monthly Forecasts & Strategies since 1980.

But he’s not just a newsletter guy. You might call him an economic subversive. Somehow, he’s managed to sneak radical free-market ideas into academia — knocking down the conventional wisdoms of monetarism, Keynesianism and Marxism.

And perhaps his biggest contribution to economic study is a rethink of GDP — laid out in his 1990 textbook The Structure of Production.

“If you look at GDP, about two-thirds of GDP is consumer spending,” Mark tells our executive publisher Addison Wiggin during an interview this week.

“So based on that, you get the media constantly saying consumer spending is the key factor to economic growth. And if the consumer doesn’t spend, we’re in big trouble and so forth.”

Ponder for a moment how twisted that is: “It’s almost an anti-savings mentality,” says Mark — “that we need to use our credit cards more and save less. And there are lots of statements to that effect. I mean, when there is a tax cut, do you spend the tax cut or, horror of horrors, would you save this money and put it into a bank or invest it in the stock market? No, no, you have to go out and buy a car. You have to go out and spend it on entertainment and so forth. “

“So it measures the hat, the glasses, the shirt that I’m wearing, the cellphones that we use, because those are usable finished products. What it doesn’t include is all the stages of production at the resource stage, the production stage, the wholesale stage — it leaves out all of those steps.

“And when you add those together, the supply chain turns out to be more than GDP itself because there are lots of stages of production before you reach final output.

“So I came up with the idea, well, let’s measure that and call it gross output.”

By measuring gross output, or GO, a fascinating thing starts to happen.

“Business investing, the goods in process, the supply chain, all of that is really what drives the economy. So this gets us back to reality, that what really drives an economy is entrepreneurship, savings, investment, innovation, technology.”

Looked at this way, Dr. Skousen says the huge stock market rally off its corona-panic lows nearly a year ago is totally justified.

Thus, the rally “was not fake. It was not just speculative. It was a reality.”

Something to think about as we turn to the day’s market notes, momentarily…

[But first, an announcement: If you belong to our VIP level of membership known as the Platinum Reserve, you have access to Mark Skousen’s full interview this week. It’s the 36th in a series Addison Wiggin began nearly a year ago as the lockdowns were kicking in.

Going forward, as winter turns to spring, we’re going to open up this interview series to our entire paid readership. That means you. We’re calling it “The Wiggin Sessions.”

If you’re one of our most long-time readers, you’ll appreciate that Addison is getting back into the “content creation” side of our business — not unlike the early years when he was helming The 5 Min. Forecast.

If you’re a newer reader, you’re in for a treat — as Addison talks with a host of financial renegades to help you make sense of a topsy-turvy world and settle on the best decisions for your future and that of your family. Watch this space as we get closer to launch…]

The market’s mini-freakout of recent days is over, at least for now.

At one point yesterday, the Nasdaq had taken a 4% spill. By day’s end, the losses were pared to only a half-percent.

The recovery coincided with Federal Reserve chair Jerome Powell’s remarks to Congress. He said the Fed remains committed to ultralow interest rates and furious money printing. Not that there should have been any doubt… but more than a few traders got it in their heads that the Fed might tighten policy soon in response to a recent sell-off in the bond market.

Checking our screens this morning, the Dow is up a bit at 31,620… the S&P 500 is flat at 3,881 and the Nasdaq is down about two-thirds of a percent at 13,384. Sure looks as if the rotation out of work-from-home names and into “reopening” names continues apace.

Among the interesting market movers this week — Fox Corp., down nearly 2.5% since Monday amid a truly serious threat to freedom of the press.

If you haven’t heard, a House subcommittee is holding a hearing today titled Fanning the Flames: Disinformation and Extremism in the Media. Its premise: “Some broadcasters’ and cable networks’ increasing reliance on conspiracy theories and misleading or patently false information raises questions about their devotion to journalistic integrity.”

Since when the hell is the federal government the arbiter of “journalistic integrity”?

It gets worse. Two members of the committee from California sent a letter to the major cable and satellite providers, including Comcast and Charter Spectrum — basically strong-arming them to drop Fox News from their channel lineup…

We hold no brief here for any of the worthless American cable news channels… and we were repulsed by Fox’s post-9/11 jingoism. But it’s their First Amendment too.

Anyway, we’re keeping half an eye on the hearing. Even we didn’t think matters would come to this juncture when we started sounding alarms 2 and a half years ago.

“Dine and dash” was so 2019. For many restaurants, the new reality is “delivery and dispute.”

Case in point — a Korean joint in the Fairfax district of Los Angeles owned by Yoonjin Hwang. “Business had been slow since the start of the pandemic, but last summer, Hwang said, she started to notice more people disputing charges and claiming missing items through delivery apps,” reports the Los Angeles Times.

“The restaurant was bleeding money and she was spending hours on the phone with the people behind the apps, trying to dispute the chargebacks.” Result? “We just couldn’t stay in business anymore,” says Ms. Hwang.

“Some people are scamming restaurateurs with fraudulent credit cards,” says the paper, ”while others request refunds, claiming they never received part or all of an order.”

Surely this is happening all over, not just LA. What a bitter blow for independent restauranteurs — on top of still-limited dine-in capacity and the 30% fees they fork over to the various delivery apps.

“I typically appreciate the insights you share in your publication,” a reader writes.

[Of course, we’ve been at this long enough to know what’s coming next…]

“However, you totally miss the mark — and absolutely mislead your readers — with your support of nuclear as the answer to our energy problems and in trying to pass it off as ‘clean’ and ‘green.’

“How is radioactive waste either of those things?! Fukushima devastated the Pacific Ocean, which won’t recover in anything close to any of our lifetimes. Creating more and more radioactive waste is absolutely not the answer.

“Wow. I’m very disappointed in this issue. Have you been bought out?”

The 5: We aim to avoid value judgments when assessing potential investment opportunities.

So we’re not “supporting” nuclear power as much as we’re just following the money. If there’s a contingent of environmentalists who believe nuclear can be operated safely and that indeed nuclear is the only way to wean ourselves off fossil fuels and still live a first-world lifestyle… well, that’s investable.

“Maximizing profits and conforming to social policies are separate endeavors,” Browne wrote in 1995. “You can cater to one endeavor only at the expense of the other.

“The stock exchange isn’t a pulpit. If you want to promote a particular environmental policy, political philosophy or other personal enthusiasm, do it with the profits you make from hardheaded investing.”

P.S. “We’re not much on socially responsible investing,” wrote our own fearless leader Addison Wiggin in 2013, “even when we judge a certain investment vehicle to be thoroughly irresponsible, if not downright reprehensible.

“Run down every sector of the S&P 500 and we’ll find something objectionable. Health care? The government has totally co-opted the insurance industry and Big Pharma… or maybe vice versa.

“Telecom? All the big companies collude with the National Security Agency’s warrantless wiretapping.

“Consumer staples? Hope you don’t mind General Mills and Kellogg sucking up the corn subsidies for breakfast cereal (and adding to kids’ waistlines, which you’ll pay for years from now when they develop diabetes and go on Medicaid).

“If government is going to direct more and more of the economy going forward, it only makes sense to ‘follow the money’ and channel your own investment flows into those areas that will benefit most.”

If that rings true for you, you’ll enjoy The Wiggin Sessions interview series when we launch it to our full paying readership in a few weeks. Stay tuned…