The Next Tech Reset (Really Big)

Wait a minute — the feds are crowing about their “biggest cryptocurrency seizure ever”… and this is one of the alleged criminal masterminds they’ve arrested? 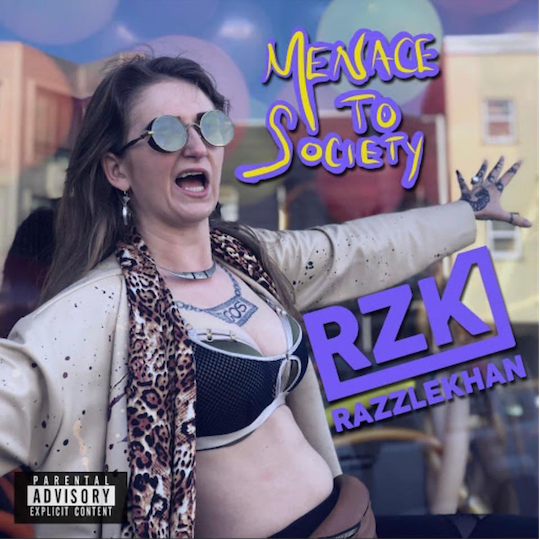 So let’s back up a moment. In 2016, someone breached the crypto exchange Bitfinex and absconded with about 120,000 Bitcoin.

At the time, the haul was worth roughly $71 million. Today? About $5 billion.

Yesterday, the feds announced they’d arrested a couple from New York City — not for the hack, to be clear, but rather for attempting to launder about 25,000 of the hacked Bitcoin.

Charged are Ilya Lichtenstein, 34, and his wife, Heather Morgan, 31.

Until now, Ms. Morgan was better known as an aspiring rapper going by the pseudonym “Razzlekhan.”

After the Justice Department made its announcement yesterday, her signature music video “Versace Bedouin” became a brief YouTube sensation — until, alas, someone with access to her account set the video to “private.”

But you can still get a glimpse into her exquisite artistry, her expressive finesse, by exploring her website — which for the moment is still online… 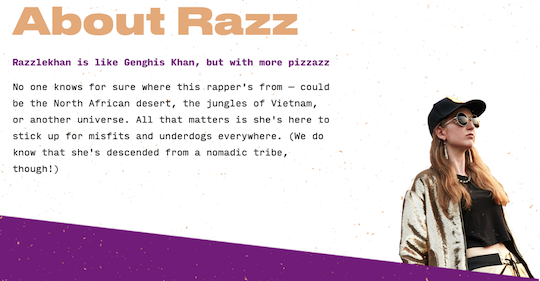 On the one hand, you might think this development would set back cryptocurrency adoption for years.

On the other hand, some phenomena are too powerful to be stopped by any obstacles — even one as absurd as the arrest of Razzlekhan.

Which brings us back to Mark Moss.

We introduced you yesterday to Mr. Moss — a successful businessman who learned the hard way that success in business doesn’t necessarily translate to success in investing.

And so he set to educating himself — including a thorough study of history and the cycles of history.

Moss concluded that the political, social and cultural zeitgeist goes through a radical overhaul every 250 years or so — resulting in a radical decentralization of power.

In other words, the global power elite — obsessed with COVID and climate and control of the populace — is running on borrowed time.

What’s more, Moss believes the 250-year political-social-cultural cycle is turning at the same time as a 50-year technology cycle.

He laid it all out in a recent conversation with 5 Min. Forecast founder Addison Wiggin. We can’t possibly capture all the nuance, but going back to the time of the American Revolution, the cycle has proceeded like so…

Which brings us to the 2020s: “The technology that we’re talking about decentralizing the world is Bitcoin or cryptocurrencies,” Moss declares.

Maybe you’ve heard of “S-curves” — a visualization of the speed at which new technologies are adopted. They proceed from a slow start, to rapid growth, finally to a plateau. Here’s a good depiction from the consulting firm Stratechi… 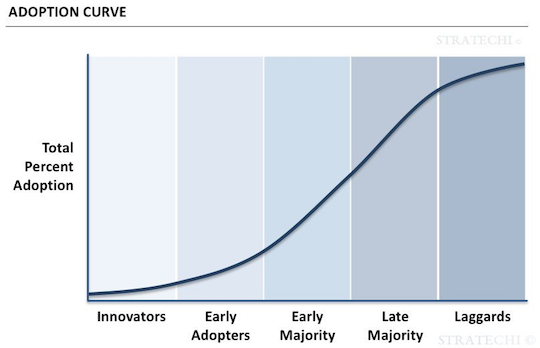 As was the case yesterday, we can’t convey all the subtleties of Mr. Moss’ argument within the confines of our 5 Mins. And we’re not even touching on his thesis of an 80-year monetary cycle, which is also turning this decade!

That’s the essence of the newest project from this e-letter’s founder, Addison Wiggin. We’re talking about a series of exclusive one-on-one interviews with some of the most unorthodox minds in finance.

Every discussion will share in-depth strategies you definitely won’t hear from financial news channels, big-name brokerages or other gurus and podcasts.

These are freewheeling conversations that can go off in unexpected directions — not unlike the improvisations of Addison’s favorite band, the Grateful Dead. Thus, we’re calling them The Wiggin Sessions.

Wall Street is staging what looks like a solid rally, while gold is creeping still higher.

Treasury yields are backing off yesterday’s pandemic-era peaks, the 10-year at 1.92%.

No major economic numbers today. After we went to virtual press yesterday, the Federal Reserve issued some eye-popping consumer credit figures: Americans added $1.02 trillion in household debt last year — the most since 2007, going smack into the financial crisis. Blame it on the high prices of housing and cars.

Uber as a solution to the supply-chain mess? Who knew?

“Uber’s business activities cover a much larger and more diverse set of services than most people realize,” says our income specialist Zach Scheidt.

Even before this acquisition, Uber had a freight and logistics division that was operating behind the scenes.

“But by spending billions of dollars, Uber was able to immediately scale its freight and logistics operations to the point where it now has the potential to contribute to the overall company.”

Zach says the acquisition comes at a crucial time: “The company is in the process of turning profitable this year, and growing those profits nearly 10-fold in 2023. That means Uber is moving out of the ‘low-earnings growth stock’ area that has been vulnerable lately and into the ‘valuable tech companies with real profits’ camp.”

No, it doesn’t pay a dividend. But Uber’s prospects are now solid enough that Zach is comfortable telling his Income on Demand readers to collect some instant income by selling Uber put options.

It’s a 5 Min. first, and we’re a little surprised it took this long — a reader resorting to the catch-all internet broadside “Stay in your lane.”

“Your first segment in yesterday’s installment shows once again why you should probably stay in your lane.

“The science of COVID changes all the time as it evolves, and so should our response to it. The severity of symptoms from the OMG virus is much less than any other previous strain. The number of infections is plummeting. If you just used your common sense, you would expect a change in the response to it. Why demean the scientist? Instead of applauding Galileo for doing his best with the information and tools that he had at the time, you would criticize him.

“Your insight to the market, world affairs and history are fascinating, but commenting politically on science is way out of your league. At least, if nothing else, you are consistently transparent concerning your political biases.

“Remember, just because the virus appears to wane during an election year shouldn’t indict the Democratic Party for responding to it appropriately. If another terrible variant arises, I guarantee the masks will go back on; again, just common sense.”

The 5: Fine. Don’t take it from us yesterday. Take it from the front page of The New York Times today. Here’s the headline they gave the web version of the story…

Meanwhile, to the best of our knowledge, the rulers of Florence and Tuscany never relied on Galileo’s scientific pronouncements to issue orders effectively destroying small businesses… effectively channeling billions into a handful of technology and pharma giants… and unleashing an inflationary torrent of money to counter some of the worst effects of their edicts.

All of those — along with mask mandates and vaccine passports that have to be enforced by legions of wait staff and ticket takers — are matters of money and commerce that are very much in “our lane.”

Once more, for benefit of anyone who’s a newer reader: Any “political biases” you see here are of a thoroughly nonpartisan nature — as we think we made pretty clear on Election Day 2020.

It’s about principles, not party. That’s why we approvingly cite leftist figures like Max Blumenthal, Kim Iversen and Jenin Younes who are as appalled as we are at the “New Normal” biomedical surveillance state… and who recognize the impact of pandemic policy these last two years often fell hardest on the working class and the Global South.

On to a counterpoint…

“Those of us who have some health education knew from the get-go the lockdowns and then attempts to mandate vaccinations for EVERYONE were corruption,” writes one of our regulars.

“The politicians are in bed with the vaccine makers… what do you think they will tell you? Even Trump is on board with it! It is the greatest vaccine ever and the Donald made it, get your booster No. 1, No. 2, No. 3!

“EVERY governor locked down their state: 27 Republicans, 23 Democrats. 100%. Up-and-coming superstar politician Ron DeSantis locked his state down! Not one had sense enough to listen to the experts who warned about the mental health problems that would come or the millions that would starve around the world from economic hardship and the suicides that would follow and the drug abuse increases and on and on. Shame on all of you who were for this.

“And now after two years of lies, the cat has escaped the bag and even normal people that don’t have any health education can see the corruption and lies the politicians have fabricated.

“November will be here soon enough and I believe it will be a Democrat wipeout. Obama lost 63 House seats during his first midterm election. I don’t remember the people being this pissed.”

The 5: During a president’s first term, it’s highly unusual for his party to gain seats in Congress during the midterms.

One notable exception was 2002 — when Republicans successfully ginned up fear of terrorism on the eve of the Iraq War.

Hard to imagine a repeat now with the virus, but there’ve been too many other uncomfortable power-grabbing parallels between 9/11 and the pandemic for us to not point it out…

“Dave, thanks for The 5. I appreciate the perspective and information,” says our final correspondent today.

“I also appreciate the goal of helping me reach the ‘independently wealthy and thinking really long term’ state of mind.

“I am 61 years old and am a small-business owner (emphasis on ‘small’). And I never expect to reach that level of wealth. But my father and I used to say, ‘If I was independently wealthy I would….’

“So your stated goal at the end of yesterday’s 5 really resonated with me. He passed last December, and he was my go-to for discussing money and politics and the general mess of the world. He was always reading and thinking.

“Thanks for keeping me informed.”

The 5: Wow… Nothing we can say after that, except thank you.