Your editor applies fingers to keyboard this morning… feeling glimmers of hope for the first time in a long time.

Start with the fact that one of the worst control freaks and power trippers of the pandemic is changing her tune — if only a little.

She’s Dr. Leana Wen of George Washington University and the Brookings Institution, one of CNN’s go-to “expert analysts” on the virus.

Four months ago, we noted how she was advocating vaccine mandates for interstate travel, along with a national vax-verification system. “Cajoling isn’t working. It’s time for drastic action.” 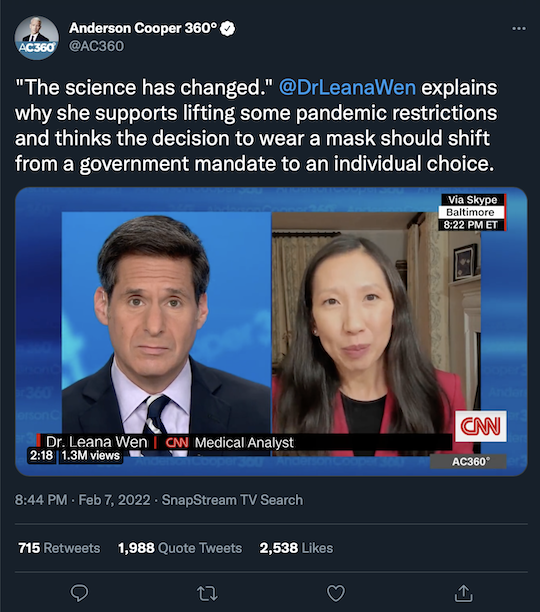 Of course, it’s not science that’s changed, only the politicized version of science known as The Science™. And it’s changed only because Democrats sense they’re going to get clobbered in the midterm elections, and they seek to stanch the bleeding.

But this still is an undeniably positive development: It means a critical mass of people who’d consented to be governed by a biomedical security state… are starting to withdraw their consent.

Along the same lines, it appears rank-and-file cops in the Canadian capital are refusing orders to inflict misery on the trucker convoy protesting vax mandates.

To be clear, social media has gone totally overboard with claims that half of the Ottawa police force has quit in support of the protest.

But they don’t have to quit to convey their solidarity — if that’s what’s going on.

See, orders came down from on high to confiscate jerry cans of fuel that everyday folks were bringing to the truckers. 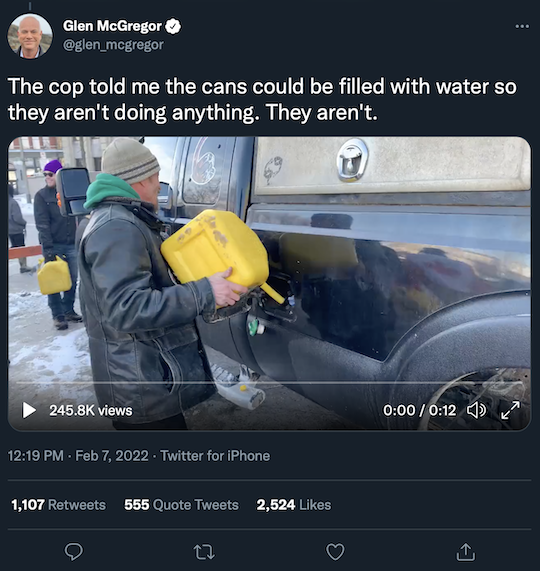 Heh — not that this fellow would be filling his truck with water now, would he?

“Hard to have a police state without police,” quips the Substack writer known as “El Gato Malo.”

Consider these developments signposts on the road to a hard-won restoration of freedom. “Everyone can see that we’re at peak centralization and we’re pushing back,” says Mark Moss.

Before we go any further, an introduction to Mr. Moss: He’s an entrepreneur and investor.

The entrepreneur part came easy. Fixing and flipping homes… founding seven companies that generated minimum seven-figure sales in their first year… launching an early e-commerce business that he sold to a Fortune 500 firm.

But — and maybe this is your own experience, too — many successful business people are terrible investors. Moss learned this the hard way during the 2008 financial crisis.

“I went from having it all, thought I was retired, thought I had figured it out, to owing millions of dollars and not having any income and having a family to take care of,” Moss recalls in an interview with 5 Min. Forecast founder Addison Wiggin.

His self-education was broad and deep — and we’re proud to say the research published by our little firm was an integral part of it.

Mr. Moss’ studies included an examination of centuries gone by — where he discovered that not only does history rhyme, it does so on a predictable timetable.

The common thread between those eras and the present moment? Pushback against the centralization of power.

More from Moss’ talk with Addison: “In the American Revolution, they rejected the centralization of the monarchy and they set up a decentralized government. They set up a Republic.

“In the Protestant Reformation, at the time the Church had amassed all the power, they had the Bible. That was the only way… to get to God. But once the printing press 70 years before had decentralized all the information, the people said, wait a minute, this is not what you’ve been telling us. We don’t need you anymore and the Church lost its power.”

Just as the Church of that time punished and even killed heretics… contemporary “cancel culture” has come for everyone who dares to deviate from the official line. (Joe Rogan, anyone?)

But in the end, the Church lost its grip… King George lost his grip 250 years later… and the “great reset” crowd of control freaks and power trippers is sure to lose its grip in the months and years to come.

You might not find this line of argument convincing. But it’s not my job to convince you today. My job is merely to whet your appetite for what Mr. Moss has to say — so you can hear his case in full and decide for yourself.

So as I said a few moments ago, Moss makes his case in a chat with 5 founder Addison Wiggin.

As I mentioned in a special email yesterday, Addison is embarking on a project that’s been two years in the making — a one-of-a-kind interview series in which he draws on his “golden Rolodex” to pick the brains of the most intriguing figures in finance.

These are freewheeling discussions that can go off in unexpected directions, generating spontaneous flashes of insight — not unlike a jazz performance, which is why we’ve dubbed them The Wiggin Sessions.

Their aim? To help you make more money… to give you more peace of mind… to provide a deeper understanding of the economy and the markets.

We’re releasing Addison’s full interview with Mark Moss on Thursday. But the only way you’ll have access is by clicking this link and joining The Wiggin Sessions for FREE.

By clicking this link, you will receive a free subscription to Wiggin Sessions and offers from us and our affiliates that we think might interest you. You can unsubscribe at any time. Privacy Policy.

The markets are mercifully quiet today, with both stocks and gold posting modest gains.

Bonds are selling off, pushing yields higher. The yield on a 10-year Treasury note is up to another pandemic-era high of 1.96%.

Inflation is quickly becoming the top concern among small-business owners.

The National Federation of Independent Business is out with its monthly Optimism Index. The headline number ticked down in January from 98.9 to 97.1.

Asked to identify their single-most important problem, a plurality of survey respondents still said good help is hard to find — “quality of labor” cited by 23%.

But inflation is close behind at 22%. A year earlier, it was cited by only 3%.

Taxes are in third place at 14%… with a fourth-place tie between regulations and labor costs, each cited by 11%.

For the record: The IRS has formally abandoned its creeptastic facial recognition plans.

The plan was to require any taxpayer who wanted to interact with the IRS online to verify his or her identity… by uploading a selfie into a database controlled by the firm ID.me.

In what might we might classify as another instance of everyday folks pushing back against centralized power… the IRS is backing down. “Everyone should feel comfortable with how their personal information is secured,” says Commissioner Charles Rettig, “and we are quickly pursuing short-term options that do not involve facial recognition.”

To the mailbag: “You are both intelligent and very knowledgeable in financial matters,” a reader writes.

[Of course, we’ve been at this long enough to see the “but” coming next…]

“Concerning the discussion of gold’s value, you have a technically correct and logical argument.

[Ooh, head fake — but you can delay the inevitable only so long…]

“However, it is theoretical and disconnected from real life.

“Using your argument, one could say that a cow or a watermelon has no intrinsic value. What about a loaded gun, or a fully loaded oil tanker or… anything!

“So if I place no value on such items, and neither does anyone else for some unrealistic reason, they are worthless? Any physical item that has potential for use will always be valued by someone.

“Look at human nature for a moment, instead of finance and theory. The poor will always greatly value cheap, questionably nutritional food. One man’s junk is another man’s treasure. Crypto’s potential is what gives it value as well.

“In real life, a beautiful shiny metal, which has incredible properties of being malleable and easily melted into another form, as well as being very rare, will always have value, just as a tree full of avocados will, even if we both hate avocados. It’s only a matter of finding the right buyer.

“Gold will have intrinsic value forever, because of its potential. If you don’t believe this truth, you don’t understand human behavior. Don’t forget, human behavior has made many men a fortune, as well as been the root cause of the loss of millions of fortunes over the millennia.

“Keep passing on the good information and your valuable assessments of world events!”

The 5: This discussion has descended into real angels-dancing-on-the-head-of-a-pin territory — for which I hold myself solely responsible, heh.

Ditto, by the way, for Addison Wiggin — this e-letter’s founding editor. Addison earned much acclaim along with Bill Bonner for their “Trade of the Decade” at the outset of the 21st Century — “Sell stocks on rallies, buy gold on dips.”

But toward the end of the 2000s gold bull market, Addison told an NPR host, “There’s a difference between a gold bug and understanding the impact of Federal Reserve policy on the U.S. dollar.

If you were already independently wealthy and thinking really long term, that drawdown in the dollar price of gold didn’t matter to you.

Most of our new readers coming in the door weren’t — and aren’t — that fortunate. It’s they we have in mind whenever someone brings up the “intrinsic value” of gold…