The world’s largest asset manager is getting deeper into Bitcoin.

We begin a potpourri of crypto-related items today with word that BlackRock is on the verge of offering a “cryptocurrency trading service.”

No, sorry, BlackRock is not launching an iShares Bitcoin ETF. According to CoinDesk, this service would be available only to institutional investors with access to the firm’s super-duper sophisticated Aladdin trading platform.

Still, it’s another milestone on the road to widespread crypto adoption. Coincidentally or not, the story breaks at the same time another conventional finance giant — JPMorgan Chase — has set a long-term Bitcoin price target of $150,000. (It’s less than a third of that figure now.)

So, the thing about Russia banning crypto trading and mining? Fake news.

We mentioned it in passing one day last month — not a done deal, as the story went, but in the works.

But no: “Russia will follow the Ministry of Finance’s suggestion to regulate Bitcoin and cryptocurrencies instead of banning them as previously recommended by its central bank,” reports Bitcoin Magazine.

In addition, the Russian press reports Bitcoin will be treated more or less like any foreign currency — with purchases “permitted through locally registered and licensed companies,” according to Forbes. 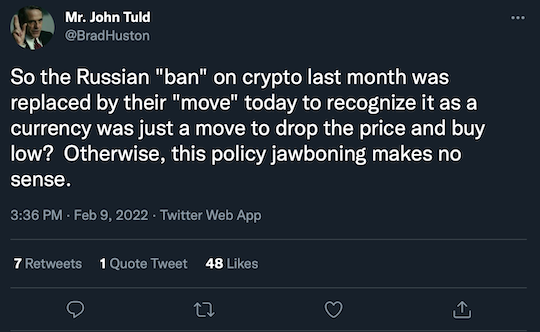 Given what we know about Russia’s enormous gold stash as a defensive measure against Western economic sanctions… it’s not implausible to think Russian leaders look upon Bitcoin as an additional store-of-value hedge.

And if they can use the power of the press release to talk down the price and buy the dip… well, you’d do it too if you were in their shoes, right?

On Monday we mentioned GoFundMe’s decision to withhold donations to the “Freedom Convoy” protesting vaccine mandates — and how supporters immediately set up an alternative donation platform using Bitcoin.

Now comes word that Assange supporters have raised $52 million in crypto for his legal defense fund; Assange continues to rot in a British prison while appealing extradition to the United States.

The fundraising vehicle was an auction of digital art: “Assange collaborated with a crypto artist known as Pak to sell a collection of NFTs (non-fungible tokens) called Censored in an online auction from Feb. 7–9 to raise funds to support his case,” reports the Reuters newswire.

Between Assange and the truckers, it’s becoming obvious that crypto offers a lifeline to those who’ve been cast out of the traditional financial system. Fascinating and heartening…

To the markets, where all eyes are on the official inflation numbers.

The Labor Department regaled us this morning with the January consumer price index. It jumped more than expected — 0.6% from the previous month.

That translates to a year-over-year inflation rate of 7.5%. It’s the highest since February 1982 — when Henry Fonda and Katharine Hepburn were the big box office draw with On Golden Pond and the J. Geils Band topped the charts with “Centerfold.”

The big contributors to the jump are food, electricity and shelter.

As always, any relation between this number and your own cost of living is purely coincidental: The real-world inflation rate from Shadow Government Statistics — using the methodology the feds used in Jimmy Carter’s day — is a record 15.6%. Until recently, the previous high was 14.8% in March 1980.

With that, the likelihood of more drastic — well, we should probably say “drastic” — action by the Federal Reserve is in view.

Since late last year it’s been a lead-pipe cinch that come March the Fed would lift its two-year monetary state of emergency — raising the benchmark fed funds rate from near zero to a little over 0.25%.

This morning, for the first time, the action in the market for fed funds futures points to an increase twice that size — to a little over 0.5%.

Thus the strongest market reaction this morning is in bonds.

They sold off — pushing prices down and yields up. For a while this morning, the yield on a 10-year Treasury note touched 2% for the first time since 2019.

The China investing thesis has changed forever — or at least for as long as Xi Jinping remains in power, which might feel like forever.

Our resident futurist George Gilder has long been bullish on China — and with good reason. “From the moment China emerged from communism into some rough approximation of a market economy,” he says, “all but ordained were decades, perhaps centuries, of extraordinary growth.

“In China for more than a generation, we saw a whole nation, historically literate and technically savvy, stuck doing little and learning less. Letting those billion people free, however imperfectly, was guaranteed to generate an explosion of wealth.”

To be clear, George is still bullish on China — given its people’s indomitable spirit. But Chinese companies? Not so much anymore…

Mr. Gilder told us about Chairman Xi’s propensity to meddle in Chinese businesses in mid-2020. But on balance, he still felt as if the Chinese tech giants like Alibaba, Tencent and Baidu were long-term holds.

Then came the months-long disappearance of Alibaba founder Jack Ma in late 2020. “Ma gave a speech criticizing government bank regulations and regulators and the cascade of government harassment the speech provoked.

“The IPO of Alibaba’s financial unit, Ant, was canceled. Ant was ordered to overhaul its financial business so as to be less competitive with Chinese state banks. The government launched an antitrust probe into Alibaba Group Holding, ultimately fining the company $2.8 billion.”

The lesson going forward? “Any Chinese company that makes the chairman jealous could be Xi’ed over at any time.”

Yesterday, George bowed to the inevitable and reluctantly parted with the Chinese names in his George Gilder Reportportfolio. Better opportunities, he says, lie elsewhere now. 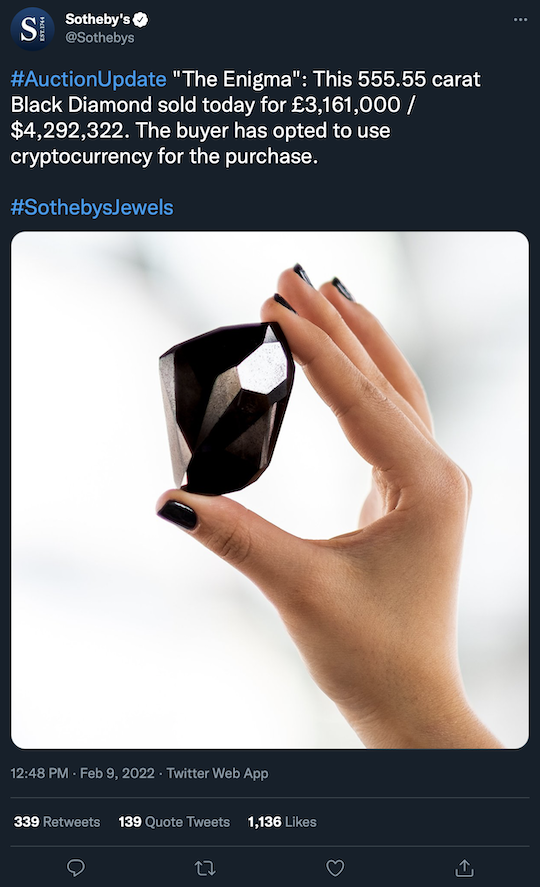 Yeah, feast your eyes. That’s the world’s biggest cut diamond, believed to be a billion years old, sold at auction for $4.3 million.

“The gem is a carbonado, which is one of the toughest forms of natural diamond,” reports the BBC. “There are competing theories about the origins of the stone, including that it was carried to Earth by an asteroid.”

Sotheby’s did not identify the winning bidder, but crypto entrepreneur Richard Heart stepped forward on Twitter to say he snagged the stone.

Heart is founder of Hex, described as “the first blockchain certificate of deposit.” He says he’ll rename the stone the “HEX.com diamond.” You’d do it too if you were in his shoes, right?

“The Canadian Freedom demonstrations are a huge effort and much more than a bunch of truckers,” a reader writes.

“You can see the actual activities in Ontario on independent (one-man) streaming video. Contrary to what the establishment reports, the main focus of the demonstrators is Freedom! There are several streaming videos but I think the best is ‘Machines Everywhere’ on YouTube.

“The guy walks the streets for many city blocks, even noting the streets he is on or crossing. He talks to many of the demonstrators. There is no better way to understand what is happening than observation of the actual situation; it should be required watching. Included are a huge number of large trucks, even more pickups and automobiles, as well as individuals. They are the most orderly and decent people you will see anywhere! Have a look!!!!”

The 5: Another good one we’ve run across is Viva Frei. These streams really are the best window into the “ground truth” in Ottawa.

The protests seem to be having an effect — at least at the provincial level. Restrictions are being eased in Alberta, Saskatchewan, Quebec and Prince Edward Island.

But on the national level, Prime Minister Justin Trudeau is digging in. Writes columnist Brian Lilley in the Toronto Sun:“This is all about politics and Trudeau’s desire to pump up his base of supporters against the protesters, attach the protest movement to Conservatives and reap the rewards with increased voter support if or when violent confrontation with the police takes place.”

And never mind Ottawa. Consider the shutdown of the Ambassador Bridge: “That single bridge connecting Windsor to Detroit carries 27% of the total two-way trade between Canada and the United States. Yelling racist won’t fix this problem.”

“A few months ago, I mentioned that there may be adverse effects to crypto,” a reader writes — “basically anything electronic from another Carrington Event.

“Yesterday SpaceX announced that 40 of 49 Starlink satellites launched into orbit last week were wiped out by a relatively minor geomagnetic storm.

The 5: There’s a bit of assumed knowledge here, so let’s back up a bit.

Yes, a geomagnetic storm can muck things up — as SpaceX learned a week ago. “These storms cause the atmosphere to warm and atmospheric density at our low deployment altitudes to increase,” says a SpaceX press release. “In fact, onboard GPS suggests the escalation speed and severity of the storm caused atmospheric drag to increase up to 50% higher than during previous launches.”

Here on Earth, they can indeed foul up electronics, even the crudest forms. The Carrington Event of 1859 knocked out the nascent telegraph network. A geomagnetic storm in 1989 disrupted the hydroelectric power system in Quebec.

But he doesn’t organize his life around it.

“If I’m wrong and the worst-case happens? I’ll move back to the farm, grow food, raise quail, live a simple life and forget all about Bitcoin.

“If I’m right? I’ll be on the bleeding edge of one of the most exciting paradigm shifts — and wealth transfers — in human history.”

You can also split the middle — prepare for something bad but not necessarily worst-case. Wrap your crypto wallet in aluminum foil or put it in a safe — anything that acts as a Faraday cage, really…