This weekend, as we Americans celebrate whatever’s left of our freedom… an Australian man will spend his 50th birthday in a British lockup as an American political prisoner.

“In a divided Washington, few causes have as much bipartisan support as prosecuting WikiLeaks founder Julian Assange,” reported The Associated Press in late 2018.

That was when Assange was still holed up inside Ecuador’s embassy in London. Word had just emerged that the feds were prepared to bring charges against him under the Espionage Act of 1917. We rose to his defense in our virtual pages… and we recapitulate our case today.

Assange now rots in London’s high-security Belmarsh prison. Six months ago, a British judge rejected a U.S. request for extradition… but she denied Assange bail while the Justice Department appeals her ruling.

Meanwhile, you didn’t hear about it from any mainstream source… but only days ago, most of the government’s case against Assange fell to pieces. More about that later…

For now, we still need to set context… and so we return to that 2018 AP article, and the bipartisan bile: “Many Democrats seethed when the radical transparency activist humiliated Hillary Clinton by publishing the content of her campaign chairman’s inbox. Most Republicans haven’t forgiven Assange for his publication of U.S. military and intelligence secrets. Much of the American media establishment holds him in contempt as well.”

For your editor, this is personal.

I’ve spent literally every working day of my adult life exercising the right to freedom of the press — a right bestowed by the Creator and secured by the First Amendment. That’s 20 years in broadcast news, 14 years and counting in financial publishing.

And yes, the activities we conduct in our trade are protected by the First Amendment — as you’ll soon see.

Our point today is that WikiLeaks too exercises the right to freedom of the press.

It was for this reason the Obama Justice Department opted not to pursue a case against Assange — much as it surely wanted to.

As The Washington Post reported in 2013, “If the Justice Department indicted Assange, it would also have to prosecute The New York Times and other news organizations and writers who published classified material, including The Washington Post and Britain’s Guardian newspaper.”

The Trump administration dispensed with those concerns. When he was CIA chief, Mike Pompeo declared, “We have to recognize that we can no longer allow Assange and his colleagues the latitude to use free speech values against us.”

To be clear, by “us” Pompeo meant the government. It’s the government against the people — and Assange has been on the side of the people, no matter which party occupies the White House or Congress.

“Their emotional, personal contempt for Assange — due to their belief that he helped defeat Hillary Clinton: the gravest crime — easily outweighs any concerns about the threats posed to press freedoms by the Trump administration’s attempts to criminalize the publication of documents.”

People forget, but WikiLeaks has served as an essential source of information about how the economy and the markets really work — information that would have never come to light otherwise.

In particular, the State Department cables pinched by Chelsea Manning and published by WikiLeaks furnished much fodder for The 5 in 2010–2011. From those cables, we learned…

Under the logic of both the Trumpers and the deep-state Democrats, we could have opened ourselves up to prosecution merely by summarizing those classified documents.

As it happens, our industry already faces periodic threats from the feds.

In the early 2000s, the Securities and Exchange Commission sued a well-known financial publisher for merely exercising his First Amendment rights. He wrote a sales promotion for a special report, citing a confidential source who said a company was on the verge of winning federal approval for an energy deal overseas.

In the months that followed, the contract was approved and the company’s stock price jumped as forecast — albeit not precisely on the publisher’s stated timetable.

The SEC pursued a bizarre case resting on the assertion that the publisher’s source made no such disclosure and the resulting error of timing caused short-term losses to subscribers.

The federal courts accepted the SEC’s broad-brush interpretation of a clause in the Securities Exchange Act of 1934, prohibiting false statements “in connection with the purchase or sale of any security.”

The law’s intent is to keep money managers, broker-dealers and other financial professionals from lying to their clients. It’s Alice-in-Wonderland legal logic to go after a publisher who didn’t even have a stake in the stock in question.

As the publisher’s lawyers wrote in a Wall Street Journal Op-Ed, “The SEC has no more business penalizing a writer who simply covers the markets than the Food and Drug Administration has in regulating a cookbook publisher because an official questions the nutritional content in a meatloaf recipe.”

At that time, the mainstream media recognized how this case posed a potential threat to their own First Amendment activities.

Thus, The New York Times, The Washington Post, CNBC and several other outlets filed a friend-of-the-court brief on behalf of the publisher — hoping the case would get a hearing in the U.S. Supreme Court.

“The implications of the SEC’s action are potentially profound,” said The New York Times editorial board in 2010: “Newspapers or websites promising their paying readers stock information that later turns out to be untrue suddenly leave themselves open to fraud charges. Any financial commentator who passes on bad information in good faith could be sued.”

Alas, the Supreme Court refused to review the decision of lower courts, letting stand a fine of more than $1 million.

Why did the SEC pursue the case in the first place?

To no small extent, our industry has a federal target on its back — for reasons we first spelled out nearly three years ago. Financial newsletter editors frequently expose truths that the power elite would rather you not hear and disclose information they’d rather you not know.

Which is exactly why Julian Assange has a target on his back.

An important point the Establishment would rather overlook: “The First Amendment doesn’t use the word ‘journalism’ and it doesn’t apply only to journalists,” says Elizabeth Goitein, co-director of the Liberty and National Security Program at the Brennan Center.

“The First Amendment protects anyone who publishes information,” she told the Associated Press in 2018, “regardless of whether they carry the mantle of journalism.”

If you want to publish a blog post about poor decision-making by your local sewer board, you’re covered by the First Amendment.

Glenn Greenwald again: “The First Amendment isn’t available only to a certain class of people licensed as ‘journalists.’ It protects not a privileged group of people called ‘professional journalists’ but rather an activity: namely, using the press (which at the time of the First Amendment’s enactment meant the literal printing press) to inform the public about what the government was doing.”

But that matters little to the bipartisan crowd that’s out for blood with Assange.

“Neither the most authoritarian factions of the Trump administration behind this prosecution, nor their bizarre and equally tyrannical allies in the Democratic Party, care the slightest about press freedoms,” Greenwald wrote.

“They only care about one thing: putting Julian Assange behind bars, because (in the case of Trump officials) he revealed U.S. war crimes and because (in the case of Democrats) he revealed corruption at the highest levels of the DNC that forced the resignation of the top five officials of the Democratic Party and harmed the Democrats’ political reputation.”

But the zeal to put Assange behind bars might be about to blow up in prosecutors’ faces. 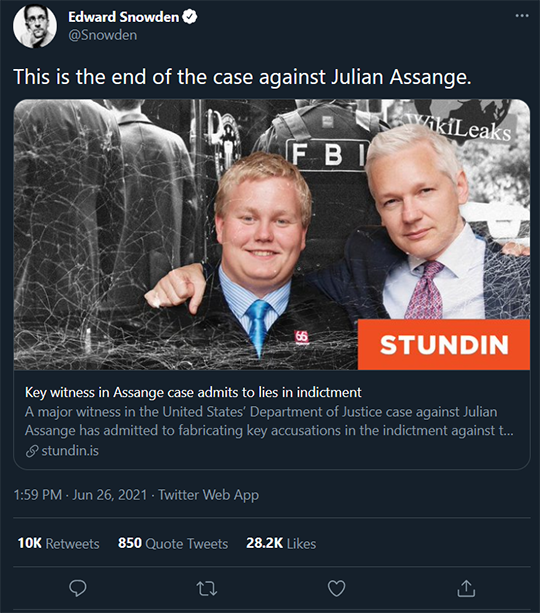 Last Saturday, the Icelandic newspaper Stundin reported that the key witness against Assange — a man named Sigurdur Thordarson — admitted to fabricating the most important accusations in the U.S. indictment.

Thordarson isn’t what you’d call a model citizen, in Iceland or anywhere else. He’d already been convicted there of various acts of fraud and embezzlement — including the theft of about $50,000 from WikiLeaks itself. He’s also a registered sex offender.

But the FBI took him under its wing and granted him immunity to work as an informant as the agency built its case against Assange. You can read the sorry tale in English at this link.

What’s at stake now is reminiscent of what was at stake just over a century ago.

The case against Assange rests in large part upon the World War I-era Espionage Act. In theory the law targeted people who spied on behalf of Germany and the other Central Powers.

In reality, as we documented a while back in a borderline-seditious episode of The 5, enforcement of the Espionage Act during WWI marked a low point for freedom of expression in America.

Aside from the example we cited of a filmmaker who served three years in prison for making a movie about the American Revolution (!), there was also the socialist leader Eugene Debs. He went to prison merely for giving a speech in which he spoke the plain truth that bankers and arms merchants stood to benefit most from American involvement in the war. A man named Charles Schenck did time for distributing anti-war pamphlets.

“Our Founding Fathers who fought against tyranny for the birth of the republic recognized freedom of speech as a pillar of a free society,” writer Nozomi Hayase said this week.

“Assange, through his publishing activities, fiercely defended the principle of free press. He sacrificed his personal liberty so that we all can have our own freedom.”

P.S. Not much to say about the markets today. All the major U.S. indexes are slightly in the green. Gold, silver and oil have moved little in the last 24 hours.

The June job numbers out today are widely touted as “better than expected” with 850,000 new or revived jobs. But on the big chart from Calculated Risk… 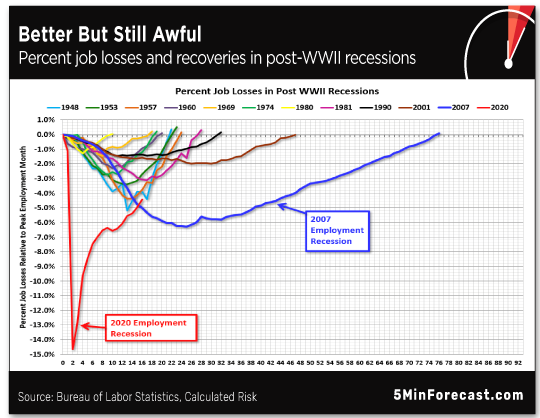 We’re back tomorrow with our weekly 5 Things You Need To Know wrap-up edition, but markets are closed Monday and we won’t be publishing. The weekday edition of The 5 returns Tuesday.