“Thank God someone is seeing this disaster clearly. Please keep it up — everybody else can watch the silly Putin show.”

So writes a reader after we gave priority yesterday to the “de-banking” of the trucker protesters in Canada over the Ukraine crisis.

Today, however, it’s Ukraine’s turn. Not least because of the warning issued by this American observer who lived in Russia for a while… 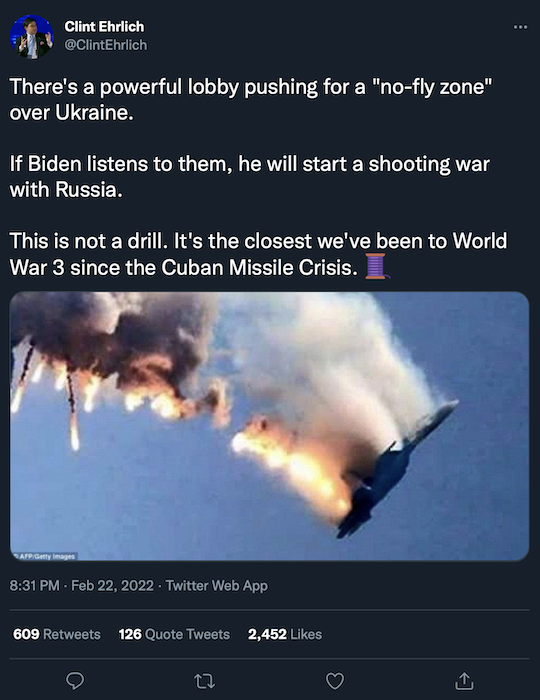 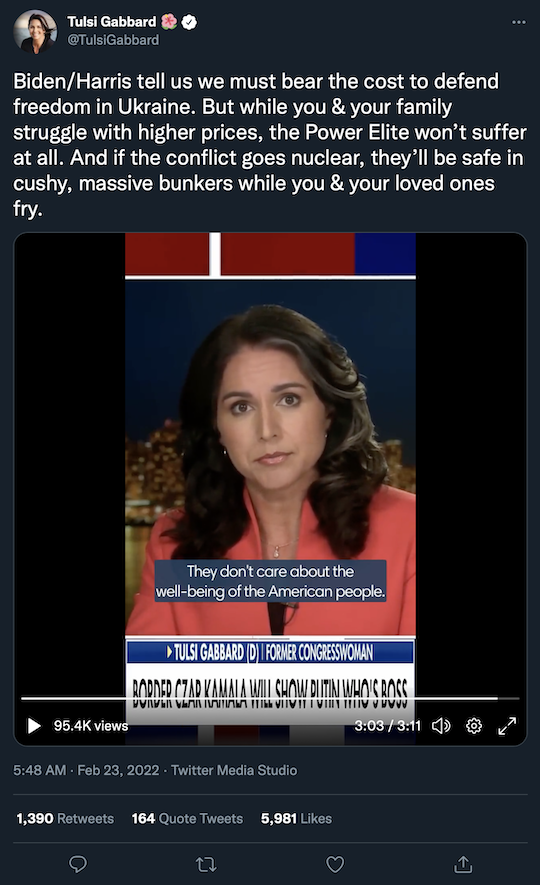 To say nothing of the financial consequences — even if the conflict doesn’t go nuclear.

With that in mind, we’ve moved heaven and earth in the last 36 hours to set up a live Zoom call where you can get an up-to-the-minute briefing from our international economics maven Jim Rickards.

It will be an in-depth treatment, far beyond what we can explore in the confines of our 5 Mins. today. Still, Jim will help us do the best we can in the time we’re allotted…

“We’ll have to wait and see what happens next, but the odds of a greater conflict are higher than they were a week ago. That doesn’t mean it’s inevitable though,” Jim says.

“In the event of an invasion, you should expect skyrocketing natural gas and oil prices, a shutdown of European industry, disruption of supply chains as the U.S. tries to surge natural gas to Europe and the breakdown of critical infrastructure in the U.S. due to Russian cyberwarfare.

“Stocks will crash and commodities like oil, natural gas and gold will soar.”

We can’t begin to tease out all of those; again, if you want the full scoop, you really need to join Jim on Zoom at 7:00 p.m. EST tonight.

But wait, you’re saying: Didn’t the president say yesterday this is already “the beginning of a Russian invasion of Ukraine”?

He did. Those were measured words, accompanied by measured economic sanctions. We know they’re measured because of the reaction in Russian stocks yesterday afternoon… 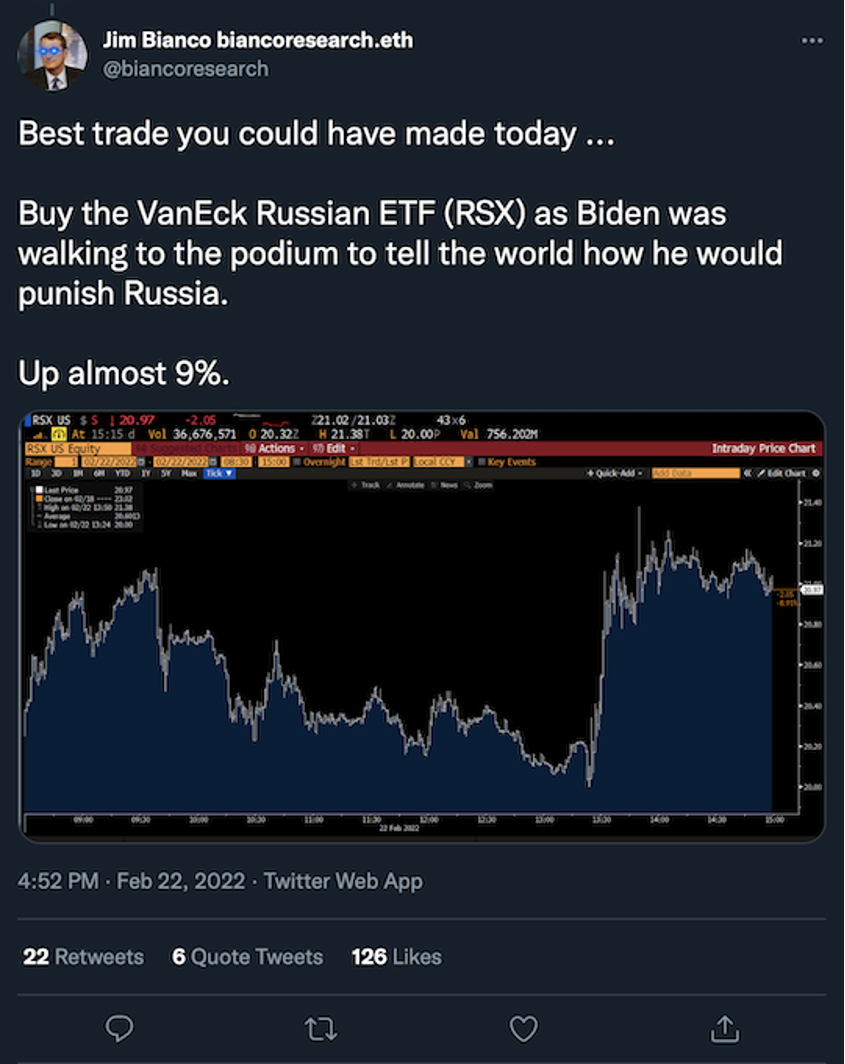 So let’s briefly explore how we got here. As you know, the big story on Monday was that Russia’s President Putin gave formal recognition to the independence of the Donbass region, the Russian-speaking far east of Ukraine… and he’s prepared to send Russian troops into the Donbass.

But here’s what the media didn’t tell you: The people of the Donbass held a referendum way back in 2014, begging Moscow to take them over because Ukraine’s government — among other human-rights outrages — tried to suppress the Russian language.

And Putin said no.

He sympathized with their plight, but he had zero interest in annexing a region that was an economic basket case. Instead, he negotiated for the Donbass to have greater autonomy within Ukraine — which he thought he achieved during a series of talks called “Minsk II” that he pursued with the leaders of Ukraine, France and Germany.

What’s different now? And why is Minsk II dead and buried?

For one thing, Ukraine’s government never followed through on its Minsk II commitments. But mostly what changed was Washington’s growing obsession with adding Ukraine to the NATO military alliance — something any Russian leader, not just Putin, would see as an existential threat. 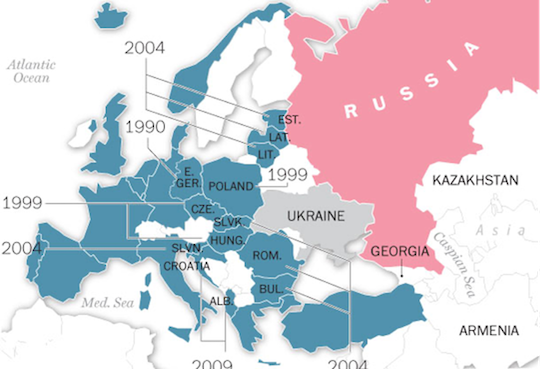 Really, it would be like the Soviet Union adding Mexico to the Warsaw Pact back in the day.

Anyway, Washington amped up the sanctions yesterday — measured as they are.

Two Russian banks are now blacklisted, and Washington is banning the trade of any new Russian government bonds. Several Russian officials were also sanctioned personally. “The move will freeze any assets the blacklisted banks, companies and individuals have in the U.S., and prohibit business dealings with them,” says The Wall Street Journal.

The problem now is that any “tougher” sanctions are doomed to backfire.

For all the talk about how Republicans are increasingly wary of foreign intervention, Republican politicos are keen to step up the economic warfare to 11 — oblivious to the consequences. 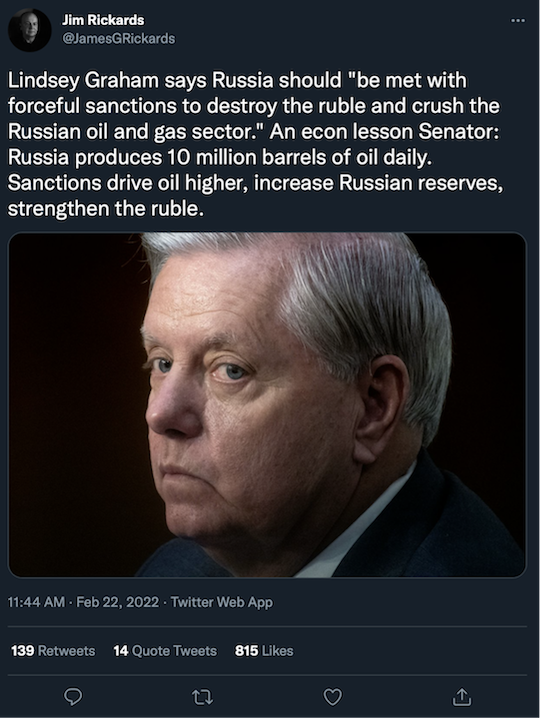 Really, though, the conceit is common to both Republicans and Democrats. Jim elaborates on one of the most talked-about proposals: “Denying Russian banks access to the U.S. dollar payments system run by the Treasury and the Federal Reserve is problematic because Russia is one of the three largest oil producers in the world (along with the U.S. and Saudi Arabia) and produces about 10% of all the oil produced on a daily basis.

“Since oil is almost 100% priced in dollars, does this mean Russia can’t sell oil?

“The U.S. seems to believe the Russians are helpless and will just stand there and take the pain. That’s a ridiculous assumption,” Jim goes on.

“In the first place, Russia has spent 13 years building up its gold reserves, until they are now over 20% of the total Russian reserve position. This gold is worth about $150 billion at current market prices and is safely stored in Russia. It cannot be hacked or frozen by Western sanctions.

“Besides, physical gold can be used to satisfy external financial obligations either with a simple transfer or by using it as collateral for hard-currency loans.”

Jim has thought long and hard about these issues — going all the way back to a “financial war game” convened by the Pentagon in 2009.

During that exercise, chronicled in his book Currency Wars, Jim was on the team playing the part of Russia and China — and Russia used gold to blunt the impact of U.S. sanctions.

As Jim just explained, Russia’s gold stash is much larger now than it was then. The financial war game is about to come to life. Will you be ready?

You will be if you join Jim for an exclusive Zoom call tonight at 7:00 p.m. EST. Again, Zoom has a 10,000-participant limit, so don’t wait to click here and secure your spot.

At last check, the major U.S. indexes are down anywhere between a third and two-thirds of a percent. At 4,289, the S&P 500 is sinking further into “correction” territory — that is, a 10% or greater decline from its most recent peak.

Crude is moving higher, a barrel of West Texas Intermediate up to $93.44. It’s still been higher at times this month.

The rally yesterday in the aforementioned RSX? Didn’t stick — down 6.75% as we write.

Depending on who you want to believe, the Canadian government is “re-banking” the previously “de-banked.”

As we’ve chronicled extensively in recent days, Ottawa froze the bank accounts and other assets of the people behind the anti-mandate trucker protest. The finance ministry says it has now told the banks to unfreeze them.

According to the Royal Canadian Mounted Police, financial institutions froze over 200 accounts belonging to individuals… as well as one held by a payment processor worth about $3 million.

We suggested yesterday these draconian measures might be rolled back… but we also said the damage would be done in terms of a chilling effect. After all this, how eager will banks be to keep doing business with “designated persons”?

Elsewhere, the Mounties are looking into tweets sent by the CEOs of Coinbase and Kraken — on the grounds they might run afoul of Canada’s emergency orders.

The tweets talked up self-custody of digital assets for much the same reason we do — not your keys, not your crypto — but the Ontario Securities Commission seems to believe that amounts to advice on how to evade the financial freeze.

Ominous stuff. We also recommend holding precious metals in your personal possession. Is that also tantamount to advocating illegal activity?

Meanwhile in these United States, the feds await the arrival of the U.S. convoy setting out from Southern California today.

“Defense Secretary Lloyd Austin has approved hundreds of unarmed National Guard troops to be deployed in Washington, D.C.,” says a report at The Hill. They’ll number about 700.

We remain conflicted about the convoy — sympathizing with their frustrations, but concerned about their squishy demands and whether Washington will simply blow them off.

A writer who goes by the pseudonym “Ishmael” helped flesh out some of our concerns at the Market Ticker blog this morning. “There are tactical actions that would make a difference,” he writes: “Any trucker who doesn’t want to drive across the country could park their truck at home and not deliver a thing for 10 days. Convoy members parking on strategic bridges at night would shut down blue hives. So would slow rolling down the highway.

“Perhaps that is part of their plan…”

From a reader in Canada: “One of our condo owners got back after six weeks in Hawaii. Knew nothing about what was going on.

“Somehow the government thought he had donated to the convoy so they shut his bank account. Local bank manager says the bank has not figured out how to reinstate him.

“It becomes really messy when you mix government incompetence into emergency shutdown legislation.”

The 5: Can’t make an omelette without breaking a few eggs, eh?

(That’s the second day in a row we’ve been able to cite Lenin. Actually, we’re not sure Lenin ever said that; your editor’s yellowing copy of Bartlett’s attributes it to “Anonymous: French.”)

“Like you, and no doubt most readers of The 5, I have been wholehearted in my support for the Canadian Freedom Convoy,” another reader writes.

“Yet it has not escaped my attention that aspects of these unfolding events bear an eerie parallel with Jan. 6, where significant numbers of well-meaning, decent folks were (possibly) manipulated into a position that allowed the forces of repression to wield power against not only themselves, but against the very core of free speech in America.

“Now Celia Farber, a self-described ‘investigative historian,’ is revealing troubling allegations about the purported leadership of the Canadian truckers movement.

“Is it beyond the pale to imagine that the Canadian people’s righteous indignation against unreasonable vaccine mandates might be hijacked by anti-freedom forces, creating a pretext for the invocation of the Emergencies Act by the totalitarian globalist Trudeau?

“Your own Jeffrey Tucker pointed out the endgame of this Act II in the global domination agenda in his Gilder column yesterday. We’ve known for a while that imposing a social credit scheme on the free world was on the agenda. I do not find it inconceivable that the Ottawa blockade was organized as a deliberate provocation to provide the (paper-thin) rationale for the imposition of draconian financial control measures in our neighbor to the north.

“Can the ‘other shoe’ be far from dropping on U.S. soil?”

The 5: Sorry, we don’t have the time/inclination to explore whether there’s any merit to Ms. Farber’s allegations. But yes, any movement outside the mainstream is subject to infiltration.

That’s been the case going back to COINTELPRO, which wormed its way into both the Black Panthers and the KKK during the 1960s. And in the present environment, the likelihood might be even higher now than it was then…