“Defending freedom will have costs for us,” said Joe Biden last week. “We need to be honest about that.”

And that was before hot war broke out.

In recent days, the president and his press secretary Jen Psaki have been trying out lines like this during public appearances when discussing economic sanctions against Russia.

Asked about rising fuel prices, Psaki said last week, “Standing up for our values is not without cost.”

Consider it a dry run before the State of the Union address tomorrow night — where presumably a main theme will be one of wartime sacrifice. Or at the very least, a variation on sacrifice themes familiar to the World War II generation… 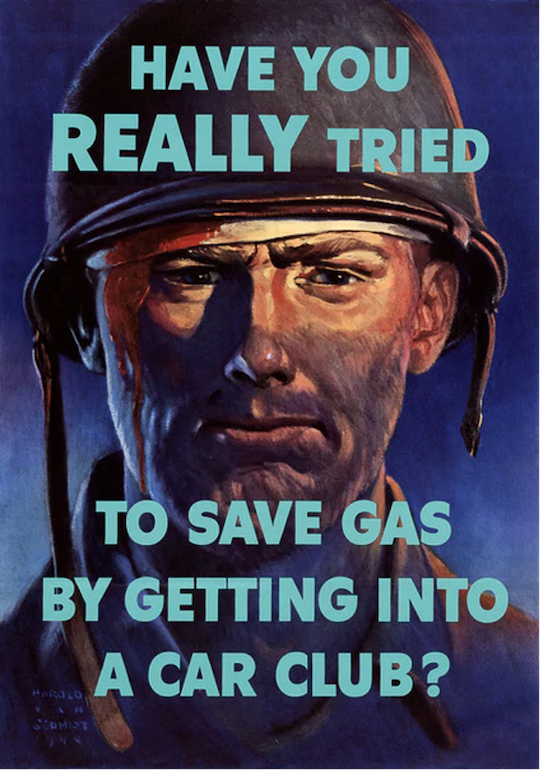 For decades, Freedom House has issued country-by-country ratings of political rights and civil liberties. Every country in the world is rated “free,” “partly free” or “not free.”

Ukraine is considered only “partly free.” On a scale of 1–100, with 100 being the freest, Ukraine comes in at 63 — on par with Mexico, Colombia and India.

Hmmm… If China were to invade India to settle their decades-long border dispute once and for all, would the Western establishment rise as one to “defend freedom”?

And if Ukraine’s “freedom” is worth “defending”… why are Ukrainian women and children allowed to flee the country but men aged 60 and under are compelled to stay in case they need to be drafted?

Even more relevant is this impertinent question: How “free” is America nowadays?

After two years of COVID lockdowns, restrictions and mandates… after two decades of Patriot Act surveillance… after racking up a $30 trillion national debt that’s hollowed out the middle class while enriching bailed-out banksters and the military-industrial complex…

… seems like lashing out against foreign devils should take a back seat to tending our own garden.

At a time we sorely need a reckoning for all the damage done at home by the control freaks and power trippers during the last 24 months… how convenient that the power elite now finds an excuse to spurn the counsel of President John Quincy Adams and venture abroad “in search of monsters to destroy.”

And one more impertinent question: What about the sacrifices you and I might have to make that the politicians are too shortsighted to anticipate?

“Joe Biden crossed a critical red line on Saturday and the world will never be the same,” says our Jim Rickards.

“Biden and other Western powers agreed to kick certain Russian banks out of the SWIFT message system. This is like cutting off oxygen to someone in intensive care. The Russian economy will slowly suffocate without access to SWIFT.

“Still, Biden went further. They not only kicked Russian commercial banks out of SWIFT, but also kicked the Central Bank of Russia out of the system except for certain transactions that may be approved on a case-by-case basis.”

SWIFT, as you might be aware by now, is the financial messaging network that greases the gears of the global economy. “It’s how one major bank confirms to another major bank that a large payment is being made by specifying the sender, receiving bank, amount, currency, date and other details,” Jim elaborates.

For the moment, not every Russian bank has been “deSWIFTed.” So there are still loopholes. But if those loopholes are closed off? 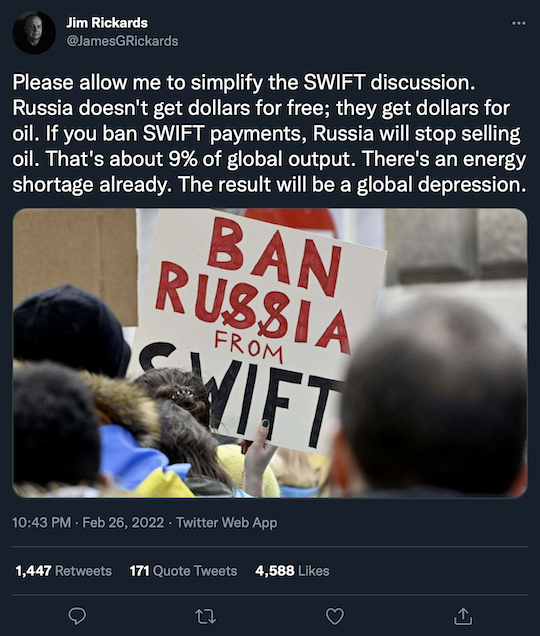 Jim reminds us the only major country kicked out of SWIFT in recent years was Iran in 2011 — “and that was devastating to their economy.

“The SWIFT sanctions on Russia are likely to be equally devastating. Too devastating? Russia is one of the three largest oil producers in the world alongside the U.S. and Saudi Arabia. It is the source of many critical industrial commodities, including neon gas for semiconductors and titanium and aluminum used in aircraft manufacture.

“If you handicap the Russian economy, you are handicapping the global economy.”

Even the deSWIFTing that’s taken place to date could easily have unintended consequences. 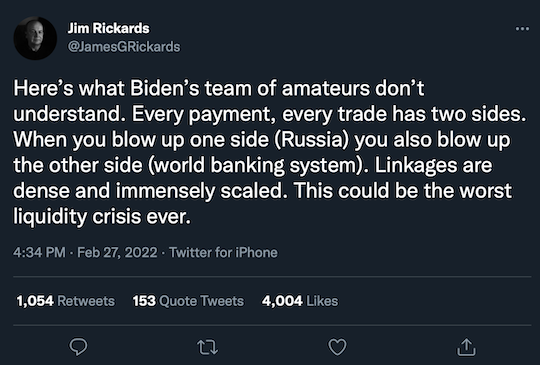 “SWIFT Ban Means the Fed May Need to Be Ready With Dollars,” adds a Bloomberg headline.

“The decision to exclude various Russian lenders from the SWIFT messaging system could result in missed payments and giant overdrafts within the international banking system and spur monetary authorities to reactivate daily operations to supply the market with dollars, according to Credit Suisse Group AG strategist Zoltan Pozsar.”

Pozsar compares the present moment to March 2020 — when governments locked down and markets seized up. He even went so far as to warn yesterday: “Central banks should stand ready to make markets on Monday again.”

The thought of still more bailouts and rescues and alphabet-soup programs from the Federal Reserve probably hasn’t crossed anyone’s mind at the White House.

And that’s the problem: “It’s easy to [financially] smash Russia,” Jim Rickards tweets. “It’s impossible to know what comes next.”

[Ed. note: Jim’s Twitter feed has been on fire since Russia invaded Wednesday night — packed with insights you won’t learn from the mainstream.

If you’ve been on the fence about subscribing to a Rickards publication, check him out on Twitter. If you like what you can see, then you should absolutely get acquainted with his “Bloody Wednesday” thesis — a market crash that does not require a land war in Europe as a catalyst.]

What began as a heavy “risk off” day in the markets is turning more mellow as the day wears on.

Treasury prices are rallying hard, sending yields down. At last check, the 10-year yield was down to 1.87%, the lowest in more than three weeks.

Crude is holding on to most of its early gains; a barrel of West Texas Intermediate rests at another highest-since-2014 level — 13 cents shy of $96.

Crypto took a brief hit over the weekend when European Central Bank chief Christine Lagarde urged new crypto regulations, justified as a way of punishing Russia. But at last check, Bitcoin is at its highest in the last 10 days — within spitting distance of $41,000. Ethereum is over $2,800.

Apart from SWIFT, other Russian developments in play include…

BP’s New York-traded shares are down 5.3%. Its biggest global rivals are all in the green.

The federal government has opened up a new front in its war on short sellers.

As we mentioned earlier in February, the FBI is looking into the activity of at least two prominent short sellers — including Carson Block of Muddy Waters Research.

We reiterate the scenario we laid out a couple weeks ago…

The scene outside a Washington, D.C., restaurant… 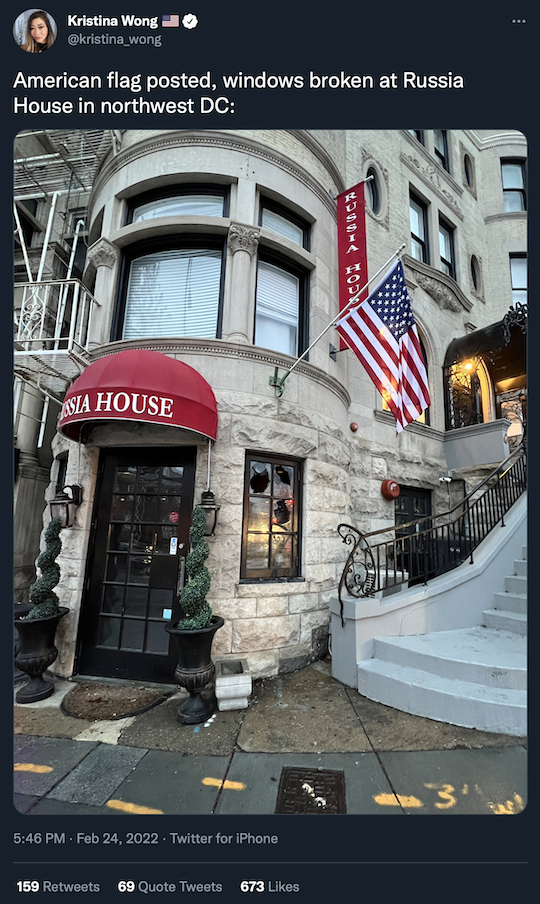 The vandals hit sometime late Thursday or early Friday. No, Russia House has nothing to do with Russia other than the cuisine. “We are a U.S.-owned company trying to survive,” owner Aaron McGovern tells The Washington Post.

It’s not even open for business right now: “Due to the latest developments of coronavirus in Washington, D.C.,” says its website, “Russia House has decided to help fight against the spread of the virus and will be closed until further notice.”

“Most, if not all, health professionals are licensed in their respective states,” a reader writes after our update on the case of Florida health coach Heather Kokesch Del Castillo.

“Doctors and nurses also have standards for their professions. No one wants to be treated by an unlicensed doctor or nurse. Dietitians are no different in their need for licensing requirements.

“Hope that helps clear up the confusion.”

The 5: No confusion here. We take grave issue with a host of occupational licensing requirements.

“Roughly one-quarter of Americans face occupational licensing obstacles before they can do their jobs,” writes Jennifer Huddleston at Reason. “For some jobs, like doctors, lawyers and teachers, licensing requirements may serve a valid state interest in promoting health and safety. But for interior designers, florists and creatives, licensing boards strangle economic opportunity.”

We’d include health coaches like Del Castillo on that list. Again, it’s a speech thing: If she had a health blog (like her fellow Floridian Mark Sisson has had for years), would you want it banned?

By the way, she was turned in to the Florida authorities by a licensed dietitian…

Following up on the de-banking of Canadian trucker protesters, a Financial Reserve member writes…

“There is one more restriction that I can imagine the authorities putting on anyone who is out of favor, and that is to suspend their cellphone service.

“With their account totally blocked, they would not be able to use their phone for anything. This would not only block their access to any sort of digital transfers, but also to communication with anyone not face to face, and no access to news or any of the other million things we tend to access online.

“With a digital ID, the authorities could make anyone a non-person at the click of a button.”

The 5: Yeah. For the time being, burner phones paid with cash or gift cards are still feasible…

“I have a suggestion for the NATO map,” a reader writes after last week.

“Can you please add a color to denote which of the 30 members of NATO are currently not contributing 2% of their GDP to support the organization?

“My research (which you should double-check) indicates that close to two-thirds of those countries do NOT meet that suggested amount.”

The 5: Hmmm, no luck there. But we came across another map — alas, also out of date! — that does a marginally better job of illustrating why Moscow is so concerned about having NATO on its doorstep in Ukraine… 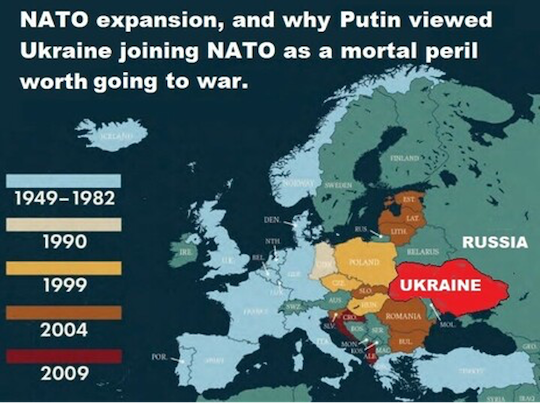 Meanwhile, over the weekend Germany made that 2% commitment.

Quips independent reporter Michael Tracey on Twitter: “Never thought I would see so many people cheering the militarization of Germany.”

P.S. For some added background on the situation in Ukraine, we encourage you to check out this talk by foreign-policy scholar John Mearsheimer from the University of Chicago.

Recorded way back in the autumn of 2015, it’s up to nearly 11.4 million views on YouTube — the last 3 million of those coming since Friday, we believe.

You might wish to watch it now before either YouTube or the UofC decides Mearsheimer’s remarks are treasonous and they take it down. ’Cause that’s the atmosphere right now. (See the D.C. restaurant above…)