It’s, well, an audacious premise… But it follows a thread The 5 traced throughout 2019, when all indicators pointed to a U.S. economy at the peak boom phase of the boom-bust cycle. (Possibly, much worse.)

Mr. Vighi happens to be of the same mindset and has developed an extended timeline of financial events in 2019–20, culminating with the WHO’s director-general uttering the word pandemic on March 11, 2020.

We won’t importune you with Vighi’s entire chronology, but here are a couple highlights…

Aug. 15, 2019: “BlackRock Inc., the world’s most powerful investment fund (managing around $7 trillion in stock and bond funds), [issued] a white paper titled Dealing With the Next Downturn.” White papers: A dime a dozen, right? Umm, not this one…

“Essentially, the paper instructs the U.S. Federal Reserve to inject liquidity directly into the financial system to prevent ‘a dramatic downturn,’” Vighi says.

“An unprecedented response is needed when monetary policy is exhausted and fiscal policy alone is not enough,” the paper says. “That response will likely involve ‘going direct.’

“[Find] ways to get central bank money directly in the hands of public- and private-sector spenders,” BlackRock nudges, to avoid “hyperinflation.”

(What a coincidence the Fed would go on to hire BlackRock to administer its massive bailout package in 2020… But we’re getting ahead of ourselves.)

Sept. 15–18, 2019: Things took a dramatic — albeit underreported — turn when the “repo” market went batsh*t crazy. If you recall, big banks and hedge funds rely on repurchase agreements for short-term loans to finance their trading, tapping billions of dollars per day.

Historically, the interest rate on repos stays closely pegged to the fed funds rate set by the Federal Reserve. (In the late summer of 2019, the rate ranged between 2–2.25%.) But out of the blue, the repo rate soared to more than 4%, according to Bloomberg data; then on Sept. 17, it passed 10%.

It took the New York Fed stepping in with a $53.2 billion loan to the 24 big banks and trading firms — called “primary dealers” — to bring the repo rate to heel at 2.5%. (Close enough for jazz… and government work?) But the N.Y. Fed needed to inject another $75 billion into the repo market on Sept. 18 to stabilize rates again.

The entire shadowy affair became the subject of a congressional hearing in December 2019, but as Dave said at the time, “The hearings didn’t get any closer to the answers.”

Vighi notes, however: “A lack of liquidity in the repo market can have a devastating domino effect on all major financial sectors.”

The takeaway: “Accommodative monetary policy is supporting the economy in the near term, but easy financial conditions are encouraging financial risk-taking and are fueling a further buildup of vulnerabilities in some sectors and countries.”

Put plainly: “The search for yield among institutional investors — such as insurance companies, asset managers and pension funds — has led them to take on riskier and less-liquid securities. These exposures may act as an amplifier of shocks,” the report said.

With conservative fixed-income investments yielding next to nothing, state and local government pension funds plowed into risky, illiquid assets like real estate and private equity.

To wit, Ambrose Evans-Pritchard of the London Telegraph warned at the time: “The world’s financial system is more stretched, unstable and dangerous than it was on the eve of the Lehman crisis.”

Vighi concurs: “In 2019, [the] world economy was plagued by the same sickness that had caused the 2008 credit crunch.

“Joining the dots is a simple-enough exercise…

“Lockdowns and the global suspension of economic transactions were intended to… allow the Fed to flood the ailing financial markets with freshly printed money while deferring hyperinflation.”

As we said up top: Audacious. But we’ll give the last word to our managing editor Dave Gonigam who said in 2019: “A decade of near-zero interest rates and other lunatic policies… It’s gonna blow up.”

And in the spirit of never letting a good crisis go to waste, the COVID-19 crisis might have provided a convenient cover to absorb the fallout.

[“Nobody rings a bell at the top,” the saying goes. But it’s not entirely true…

“Sometimes,” wrote our macro expert Jim Rickards five years ago, “the global power elites do ring a bell. But they ring it for the wealthiest and most powerful individuals only.

“Everyday investors like you are not intended to hear it,” he says. “That’s why I am going directly to the public with a plan to sidestep a near-term market meltdown.”

Jim’s noticed an emerging pattern detrimental to the stock market, something that might even sink the Dow by as much as 80% practically overnight.

To fill you in, Jim will be reporting from Washington, D.C., on March 14 at 2 p.m. EST in an event called Countdown to Crisis.

To join the FREE event, simply click this link to register. Once you click that link, verify your access and keep a lookout on your inbox for updates.]

“There are two things you can be certain of in this life… death and taxes!” says our retirement specialist Zach Scheidt.

“The famous line came to mind this week when I received not two questions about how to invest to minimize tax liabilities.

“This question is especially important today as investors are moving money out of speculative tech stocks and into more stable value investments,” he says. “Many of these transactions have big tax implications.

“And while I’m not a tax lawyer and can’t give you individual advice, I can help you with some broad ideas that should keep more of your money in your account and out of Uncle Sam’s treasury.”

Long-Term vs. Short-Term Gains: “Our first question today comes from Brad. He’s holding a big position in one of the speculative tech stocks that have been taking on water lately.”

Brad says: “I know I need to sell my shares soon. But if I wait a few more months I’ll be able to lock in long-term gains instead of short-term. Isn’t it smart to wait so I can pay a lower tax rate?”

Zach answers: “As you may have heard, short-term trading gains are taxed at the same rate as ordinary income. But if you hold an investment for more than 12 months, your tax rate on profits is typically taxed at a lower rate.

“Don’t make investment-protection decisions based on tax rates,” says Zach. “In other words, if you’re holding a stock and you want to protect your gains, it’s never a good idea to let a tax strategy muddle your decision making.

“In today’s shifting market, it makes a lot more sense to sell a position (even if you have to pay a higher tax rate) than to hang on for a few more months to get to those 12 months,” he says.

“In the next few months, you could lose much more than you’re trying to save on taxes.

Converting From a Traditional to Roth IRA: “Another tax question comes from Fred, a 70-year-old investor who is still working full time.”

“I am considering a Roth conversion,” says Fred, “so my son will not be heavily taxed upon my demise.”

“This typically means you’re required to pay income taxes on the entire amount of money moved,” he adds. “But from that point on, you’ll never have to pay taxes on capital in the Roth account (regardless of how much it grows).

“This decision is a very personal choice,” Zach says. “But for anyone considering a move like this, here are some general concepts to consider…

“First, know that all money taken out of a traditional retirement account will be taxed (not just the profits). And that capital is taxed as ordinary income.

“Also, be aware that moving significant amounts of money can push someone’s total income into a higher tax bracket.

“So it’s possible to shoot yourself in the foot by triggering a higher overall tax rate for this extra income that you’re taking,” he says.

“One other important thing to think about is the way inheritances are taxed,” Zach continues. “If someone inherits a traditional IRA, they will have to pay income taxes on any withdrawal taken from that account.

“But there may also be an income tax deduction taken if the estate paid taxes when the benefactor passed away.”

Finally, Zach says: “If Fred were my dad, I would advise him to talk to a certified financial planner or tax strategist.”

*Sigh* More virtue-signaling from around the world… 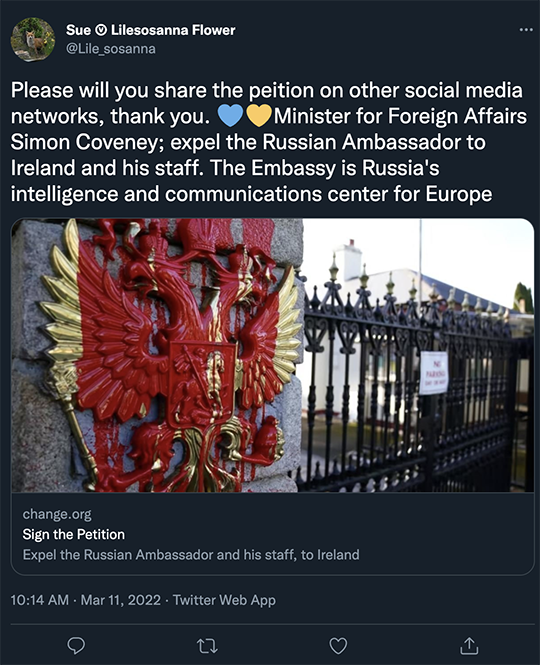 Last week, a Catholic priest poured red paint on the double-headed eagle affixed to Russia’s embassy gate in Ireland, lilting that he’d be “delighted” to be arrested for the Ukrainian cause. Then on Monday, a truck driver rammed his vehicle through the embassy gates in a show of Ukrainian solidarity.

Now there’s a movement to expel the Russian ambassador from Ireland and change the name of the road in Dublin — where the embassy is situated — to Independent Ukraine Road.

Of course it is.

Take care this weekend. Maybe take a break from the 24/7 news cycle? Just a suggestion…

P.S. About the throughline from the debilitated economy in 2019… to the pandemic lockdowns in 2020… to the call for wartime sacrifices today… 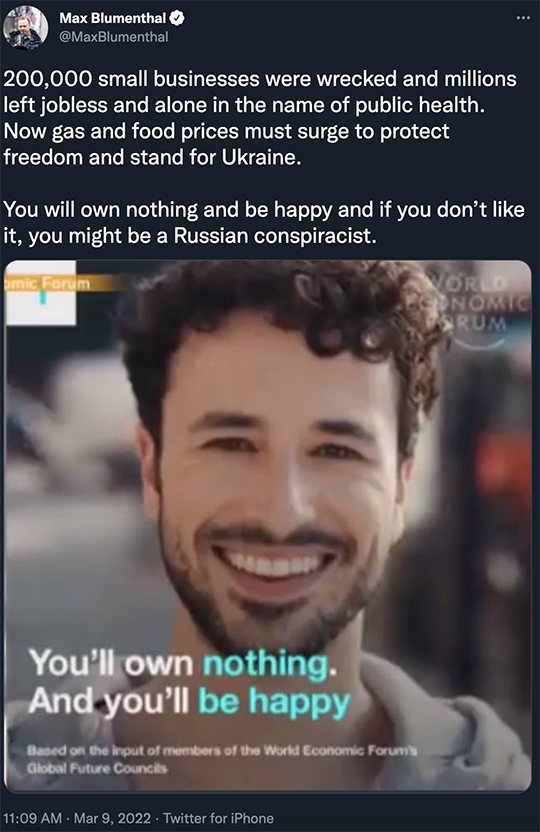 Have you had enough?

Then we’ll cut right to the chase: This Monday, March 14, at exactly 2 p.m. EST Jim Rickards is going live in front of the White House to detail the biggest threat to our financial system since the 1929 stock market collapse.