At long last, the end of the dollar as we know it — as the globe’s reserve currency — is in sight. Now what?

“The U.S. has badly overplayed its hand by imposing extreme economic and financial sanctions on Russia as a result of the war in Ukraine,” says our macroeconomics maven Jim Rickards.

“Far from deterring behavior or shaping the course of conduct, these sanctions have accelerated what was already a prominent shift away from the use of U.S. dollars both as a reserve asset currency and as a payment currency.”

Of course, it’s not just the unprecedented sanctions — freezing over half of Russia’s foreign exchange reserves — that brought matters to a head.

It’s been in the works for years, as Jim’s been telling us the whole time: “The decline is due to excessive debt, overreliance on outsourcing and Chinese manufacturing, internal political dysfunction and weak leadership.

You’re not holding your breath, right? Jim says best-case, it would take decades.

The era of dollar dominance was fun while it lasted.

It began with the Bretton Woods agreement of 1944. An Allied victory in World War II was in sight… but a nearly broke Great Britain had to bow to the inevitable, surrendering the pound’s role as the global reserve currency once and for all.

Even when Richard Nixon cut the dollar’s last tie to gold in 1971, the powers that be managed to retain that confidence for five more decades.

“Now that that has happened, every central bank in the world is reevaluating its dollar-denominated reserves and asking itself if the U.S. will freeze those holdings in some future dispute.

“Ministers of finance are not waiting to find out. They’re acting preemptively to reduce dollar holdings.

“The problem with such reductions is that it’s not easy to find alternatives to the dollar.”

The Chinese yuan? No, sorry.

Much has been made of Saudi Arabia’s move to sell oil to China in exchange for yuan. It’s a blow to the dollar, for sure — but it’s not a sign of the yuan supplanting the dollar.

“Saudi Arabia might hold some yuan in bank accounts and use those to pay for exports from China including some manufactured goods, but those amounts will be relatively small compared with oil exports.

“The yuan is not well positioned to be a reserve currency because there is no deep, liquid pool of Chinese government bonds for any investors to purchase,” Jim goes on.

“China also lacks the dealer and hedging structure of a mature bond market and lacks the rule of law needed to give investors comfort.

“In short, the Chinese yuan may grow as a payment currency, but it will be decades or longer before it serves as a reserve currency.

“Investors who are not comfortable with U.S. Treasury securities in their reserve positions because of recent economic sanctions will more likely turn to gold or other hard assets, including land.”

Ah yes, gold: While the reserve-currency conundrum shakes out, “gold is available to central banks and has proven to be an excellent store of value over centuries, even millennia.

“Central banks have been net buyers of gold since 2010. Now the tempo has increased in order to shield reserves from dollar seizures.”

Gold will serve you well in this decade of transition. But gold alone won’t protect you from the turbulence in the months ahead — especially now that the Federal Reserve is embarking on a too-little-too-late cycle of interest-rate increases.

For the rest of 2022, you need a strategy that’s proven itself in every stock-market shock for more than a century — as Jim explains when you follow this link.

In the meantime, it’s a risk-on day in the markets — alas, not that precious metals are benefiting.

Bonds, however, are selling off again — pushing yields still higher. The yield on a 10-year Treasury note is up to 2.9% — a level last seen around Thanksgiving 2018.

Cryptos have staged a respectable recovery: Bitcoin is back above $41,000 and Ethereum over $3,100.

➢ Name in the news: Twitter is down nearly 1% amid a report from The Wall Street Journal that Apollo Global Management might take part in a bid for TWTR — either with or without Elon Musk

➢ Economic numbers of the day: Housing starts came in better than expected — up 0.3% in March. Ditto for permits, which are a better indicator of future activity — up 0.4%. Yes, prices are at nosebleed levels, but for the moment supply is still super-tight. This is not the housing market of 2007.

Airline stocks are rallying hard — a day after a federal judge overturned the CDC’s mask mandate for planes, trains and buses.

The judge did not take a stand on the wisdom or folly of masking, merely ruling the CDC overstepped its authority. That’s a distinction you and I can understand, but it’s lost on the usual virtue-signaling suspects. 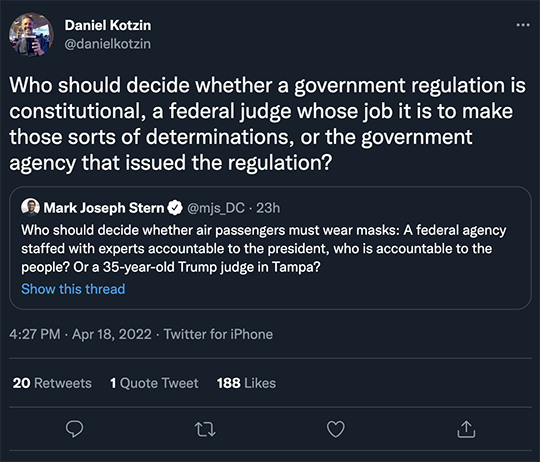 Within hours of the ruling yesterday, the Big Four airlines dropped their mask requirements. At last check today, American Airlines is up nearly 6%… United up more than 4%… Delta up 3%… and Southwest up 2%. 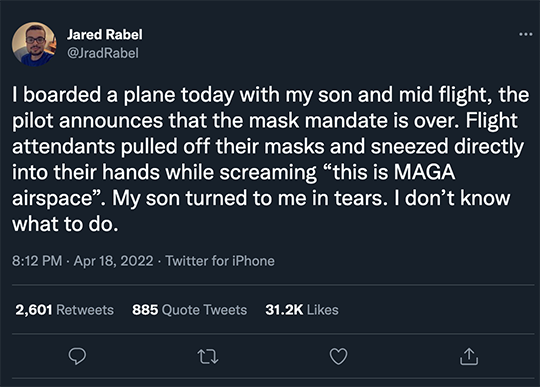 Just in: The Biden administration says it will not appeal the ruling. Interesting…

“Regardless of your position on whether masks should be worn or not, it’s clear that travel is starting to get back to normal,” says our income investing maven Zach Scheidt.

“And as passengers become more comfortable flying in our post-pandemic world, travel and leisure stocks should do very well.”

Zach, having a long-term mindset, is usually gun-shy about airlines. “The airline business has a history of booms and busts along with plenty of ups and downs for investors too. There’s just too much uncertainty in the industry and airlines have to spend so much money on planes, fuel and staffing.”

All the same, “airline stocks can trade sharply higher when demand for travel picks up. After years of COVID restrictions and social distancing, we’re finally heading into a summer travel season with a broad sense of confidence.”

And so Zach has no trouble recommending selling options on a Big Four airline to collect some instant income — which is exactly what he did this morning in his premium Income on Demand advisory.

➢ Interestingly, Uber and Lyft took their cue from the airlines yesterday — dropping their own mask requirements. The ban on front-seat passengers is also lifted.

On the subject of Twitter’s “poison pill” aiming to thwart Elon Musk’s bid for the company, a reader writes…

“Perhaps Musk can convince the Robinhood ‘bros’ to stock up on those discounted TWTR ‘stonks’ and transfer their votes to him.”

The 5: That would be an interesting gambit, no?

By the way, you just reminded us that some of the most vocal individuals among the Tesla shorts — the folks convinced TSLA is a fraud that’s doomed to collapse and have invested accordingly — have been themselves banned from Twitter for one or another violation of “community standards.”

After our hopscotch through the headlines yesterday, we heard from a professor at a state university in the Northeast…

“Thank you, Dave — You are such a breath of journalistic fresh air.

“(Yes, there are still a few of us here in academe who haven’t completely lost all sense…)”

“Anyone who pays attention knows that mainstream news outlets are simply a string of social media-cum-infomercials, linked to press releases,” writes another reader — as if to pick up where the previous one left off.

“Getting any real news, even about apparently real events, requires digging through other resources not controlled by billionaire elites.

“The Ukraine war has created new opportunities for blocking alternative messages, which themselves may be suspect, but do contribute to perspectives for those who understand how the world works.

“The fact that we have a 24-hour news cycle makes it all the more frustrating that in addition to the poor quality of information, the quantity itself boils down to less than an hour per day of real news.

“Censorship doesn’t consist of only spinning or twisting the news, but even more harmful, the blocking out of valuable news about important subjects. We saw lots of this during the pandemic, but we can’t know what we don’t know.

“But in a world connected by every kind of technology, it requires very active censorship to keep important events out of the news.”

The 5: That, and a mindset that stands the traditional role of a free press on its head.

Time was the media at least gave lip service to the concept of holding the powerful to account. Now they harangue randos on social media for engaging in wrongthink.

Importantly, the account does not engage in anything the U.S. government could possibly classify as “MDM” — mis-, dis-, or mal-information. It doesn’t fabricate anything; it simply re-posts and links to especially insipid videos.

Anyway, our reader also shared a vivid example of “very active censorship to keep important events out of the news.” But our 5 Mins. are running short, so we’ll make room for it tomorrow.