We begin the week with an obligatory nuclear-war update… because as we can’t say often enough, no one will care about the economy or the markets if the nukes start flying.

Here’s a story the media have mostly overlooked… and if they did pay attention, they were oblivious to its significance.

Speaking last week at Georgia Tech, CIA Director William Burns said it’s not implausible that Vladimir Putin might resort to a “battlefield nuke” in Ukraine if he felt his back was to the wall.

“Given the potential desperation of President Putin and the Russian leadership, given the setbacks that they’ve faced so far militarily, none of us can take lightly the threat posed by a potential resort to tactical nuclear weapons or low-yield nuclear weapons,” Burns said.

Coming from any other deep-state apparatchik, we’d blow this off as only so much arm-waving. From Burns, however, it’s sobering as hell.

In 2008, he was Bush 43’s ambassador to Moscow, where he penned a cable back to Washington titled “Nyet Means Nyet: Russia’s NATO Enlargement Redlines.”

At the time, Dubya was keen to bring Ukraine and Georgia into the NATO alliance. “Foreign Minister Lavrov and other senior officials have reiterated strong opposition,” Burns wrote, “stressing that Russia would view further eastward expansion as a potential military threat.” [Emphasis ours.]

So thanks to Burns, people in Washington have known since 2008 that Ukraine and NATO are a red line in Moscow. And thanks to Julian Assange publishing Burns’ memo on WikiLeaks, we the people have had access to Burns’ warning since 2010.

It’s almost as if there were a sad, unspoken subtext to Burns’ remarks last week: “I tried to tell them, but no one listened.”

Anyway, assuming continued survival of the species, we move on to our main topic…

Indeed, we pick up where we left off before the extended weekend — with the meltdown among the chattering classes at the prospect of Elon Musk buying Twitter… 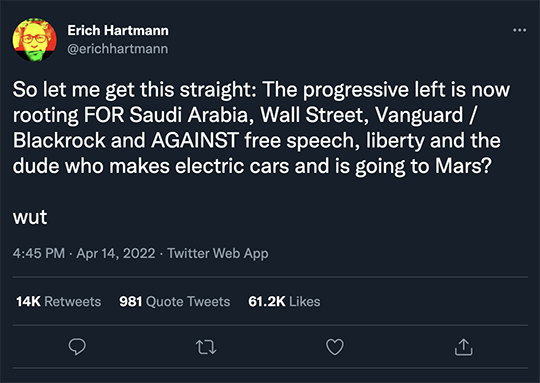 It’s even more absurd than it sounds: Imagine being on the payroll of Jeff Bezos’ Washington Post or Michael Bloomberg’s eponymous info-empire… and getting your boxers in a wad about billionaires “controlling” the acceptable boundaries of speech.

Too, we can’t shake the thought that the power elite is circling the wagons to prevent Musk from ever succeeding… 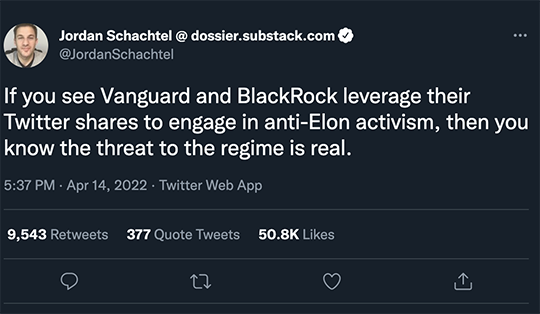 So as you might have heard, Twitter’s board adopted a “poison pill” scheme to prevent Musk from acquiring more than 15% of the company. (He currently owns 9.2%.)

If he tries, the board will flood the market with new shares available for everyday folks to buy at a discount — thus diluting the value of Musk’s shares.

At the same time, Saudi Arabia’s playboy billionaire Prince Alwaleed bin Talal called Musk’s $54.20 per share offer too low. Alwaleed was an early Twitter investor; by 2015, he owned a 5.2% stake.

➢The exact percentage today is something of a mystery — which Musk trolled Alwaleed about on Twitter. Musk also inquired, “What are the Kingdom’s views on journalistic freedom of speech?”

Also in the mix: Musk’s status as Twitter’s biggest shareholder lasted only a few days. Vanguard Group disclosed it now owns more than 10% of the company via its many mutual funds and ETFs. BlackRock also owns a not-insubstantial Twitter stake via its iShares funds; ditto for State Street Corp. via its SPDR funds.

Together, they potentially exercise enough heft to thwart Musk’s ambitions.

That is, assuming Musk’s ambitions are genuine and he’s not doing all this to feed his narcissism.

We’re still not convinced. Yes, he talked a good game last week about Twitter’s “potential to be the platform for free speech around the globe” and how “free speech is a societal imperative for a functioning democracy.”

But where’s he been on these issues since they exploded into view in 2018? We didn’t see him stand up for Infowars loudmouth Alex Jones when he was simultaneously “de-platformed” from Facebook and YouTube. And to the best of our knowledge, Musk has never stood up for the aforementioned Julian Assange — whose case defines the ability of a free press to hold government accountable.

But whether or not Musk succeeds, the investment implications could be profound. For context, look at this one-year chart of Twitter’s share price… 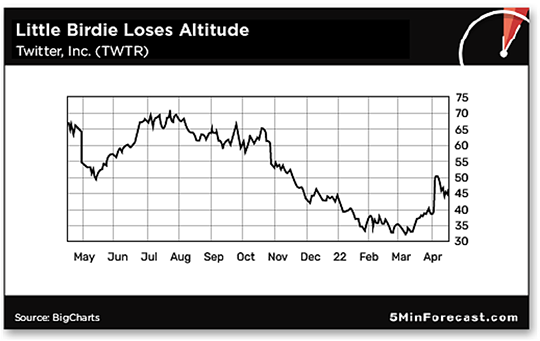 And Twitter is hardly alone. “Many stocks that used to be quite popular are now trading much lower,” says our Zach Scheidt. “And lower stock prices make many of these companies great buyout targets!

“Many of these companies were popular because they offered unique services or had groundbreaking technology. But they didn’t turn a profit — so eventually the stocks fell.

Now wealthy investors like Elon Musk — or some of the biggest private equity investment companies — can buy the entire companies for pennies on the dollar.

“And blue chip tech companies can also go shopping. They may buy an unprofitable tech company at a cheap price and then use the technology to grow their existing businesses.

“As an investor, I’m interested in holding some of these stocks as buyout candidates. Because when a buyout deal is announced, stocks that are being bought typically trade sharply higher!

“I’d suggest looking through a list of some of the most popular ‘Robinhood’ type stocks that were highfliers last year at this time. Buying a handful of these stocks as speculative plays right now could put you in a great spot to profit from a new wave of buyout transactions later this year.”

In the meantime, the broad stock market is losing ground as a new week begins and earnings season gets into full swing.

At last check, the Dow is off a quarter-percent at 34,356. The S&P 500 is off a third of a percent at 4,376. The Nasdaq is taking it worst — off more than three-quarters of a percent at 13,244. The last of the big banks reported their quarterly numbers this morning; Bank of America shares are up 4% after the firm issued a rosy revenue forecast.

Don’t look now but crude is back within a few pennies of $109 a barrel, the highest since late March.

Cryptocurrencies gave up round-number support over the long weekend — Bitcoin back below $40,000 and Ethereum below $3,000.

➢ The lone economic number of note is homebuilder sentiment, courtesy of the National Association of Home Builders: At 77, the April number is still very healthy… but it’s also down substantially from 84 only four months ago. Sky-high home prices, rising mortgage rates, higher labor costs, higher materials costs… they’re all taking a toll.

Problems we hadn’t started thinking about yet: The proliferation of selfies might be driving a boom in unnecessar y plastic surgery.

Or so conclude researchers at UT Southwestern Medical Center in Dallas, who published some interesting findings in the journal Plastic & Reconstructive Surgery based on their work with 30 volunteers.

We won’t delve too deeply into the researchers’ methodology. Suffice to say that a selfie taken with a typical smartphone camera makes your nose look longer and your chin look shorter compared with a higher-quality camera that better captures the real you.

“If young people are using selfies as their only guide, they may be coming to plastic surgeons to fix problems that don’t exist except in the world of social media,” says UT Southwestern plastic surgery professor Bardia Amirlak.

Apparently, this is not the first such study. Check this out from four years ago… 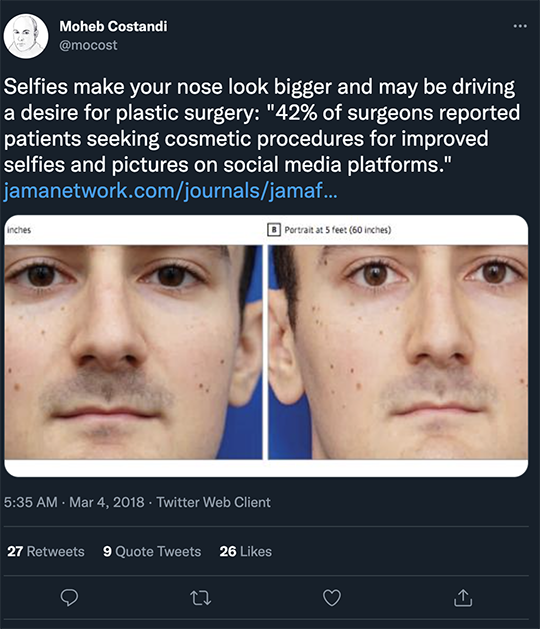 But it seems the pandemic took the phenomenon to a whole other level — especially for Gen Z.

“Unfortunately, selfies emphasize the physical aspects of oneself in making those comparisons and have been associated with lower self-esteem, lower mood and increased body dissatisfaction,” says UT Southwestern psychiatry professor Carrie McAdams.

“Many changes in our society, including selfies, social media and isolation from COVID-19, have led to escalating rates of mental health problems in this age group, including depression, anxiety, addiction and eating disorders.”

Selfie-induced nose jobs — something else on which we can blame the lockdowns. But it’s all good if you’re a plastic surgeon and young people are armed with stimmy checks, or maybe the gains from meme stocks and cryptos that the Fed artificially pumped up.

See, and you thought there wasn’t a money-and-markets angle when we got started with this little item. Heh…

“I am currently on the union negotiating committee in contract talks with our company. I think this reader may be a manager for the company I work for — LOL.

“I can think of a couple of ways invested dollars are subject to inflation. First, if you could invest half of your income then those investments would have to earn the inflation rate after taxes just to stay the same. It becomes harder to make gains.

“Second, your savings are to buy goods and services in the future. If future prices are affected by inflation, then your savings will buy less for future-you.

“Inflation hurts all the working people (most of us…) and wages need to keep up directly with inflation for your standard of living to remain the same. Worse yet, the current government statistics inflation rate is very understated.”

On your last point… you don’t have to buy into the ShadowStats inflation number (16.8%) to know that the official numbers are gamed. Six months ago, DoubleLine Capital’s Jeffrey Gundlach said if you adjusted for the bogus housing calculation known as “owners’ equivalent rent,” we were already experiencing 12% inflation.

“I know everyone thinks the economic sanctions will cause Putin to throw in the towel, but I doubt it,” a reader writes.

“But I guess we just need to give them a little more time to take effect.”

The 5: We said as much at the start of the month. And as we also said, there’s no guarantee a Putin successor would be any more amenable to Washington’s wishes.

Which brings us full circle today, back to William Burns’ cable sent from Moscow to Washington in 2008. In that memo, he also said no Russian leader would stand for Ukrainian membership in NATO — not even the most dyed-in-the-wool pro-Western democrat.

Yes, Putin bears sole responsibility for the decision to invade. But to call the invasion “unprovoked,” as you hear so often from Western media, is the height of dishonesty. Whether out of ignorance or intransigence (or both), America’s vaunted “national security” establishment has brought untold suffering to everyday Ukrainians, the threat of famine to much of the Global South and the threat of nuclear conflict to the entire globe.

Your tax dollars at work…