“The global economy collapses due to uncertainty over the U.S. economy (ill-conceived financial derivatives ensure that virulent U.S. contagion spreads to every nook and cranny of the global financial and economic system).”

Such was the scenario John Robb put forth at The 5 in March of 2016.

Mr. Robb, whom Slate called “the futurists’ futurist,” was four years premature with his prediction. Nevertheless, he was just about bang-on for 2020 (with the exception of a global pandemic, but even our public health geniuses were caught off guard by that one).

For years, Mr. Robb — a former Air Force officer and tech entrepreneur — wrote at the Global Guerrillas blog about asymmetric conflicts and fourth-generation warfare, including how they might be waged on U.S. soil. (Now, like so many of our favorite underground writers, Global Guerillas exists on Substack.)

Mr. Robb is also the author of a book called Brave New War, published in 2007, which includes the provocative premise that wars — hot and cold — are now fought via “network swarming.”

In his book, Robb says this phenomenon is an offshoot of the War on Terror. As he describes it: “Autonomous groups of zealots, patriots and criminals alike” who “have access to many of the same tools we do — from satellite phones to engineering degrees — and they use them every bit as effectively.” (Emphasis ours.)

“But their single-most important asset is their organizational structure, an open-source community network.”

More recently, during an interview at The Wiggin Sessions with our founding editor Addison Wiggin, Mr. Robb riffed on this theme: “I’ve been tracking these movements, these networks, up through the Iraq War, then to the Arab Spring. We saw these… open-source dynamic protest movements in Egypt, in Tunisia.”

“Then we saw it move to politics with Trump in 2016,” Robb notes. “He ran an insurgency using the same kind of mechanisms that I was analyzing.”

Except in Trump’s case, of course, “swarming” cut both ways, ultimately culminating with “the leader of the free world” — presumably the most powerful man in the world — being deplatformed on major social media outlets.

“We have this network dictating and bounding our politics,” Mr. Robb comments, “telling us through censorship and other means, what we [can] talk about. If you have topics that they consider counterfactual or not specifically approved, those can disappear. [Which] points to something I’ve been worried about for a long while.

“We have… almost a new disruptive event every year now,” Robb says. “It’s causing huge changes across the world, the global economy, society, politics.” Mr. Robb calls it a state of “perma-crisis” in that “we created this complex global system and it is throwing off crisis after crisis.”

And the latest crisis-must-act-now is a heavyweight…

“What we saw when Russia invaded Ukraine… wasn’t a traditional response between global superpowers,” says Robb.

“What typically would happen is that if Russia invaded Ukraine, then the U.S. would mobilize resources… to help Ukraine defend itself and also do targeted sanctions… to push them toward resolution.

“What we saw instead was this network response where millions of people across the board… inside corporations… in different branches of government, across different governments, all taking action simultaneously to initially defend Ukraine. Then they started focusing on Russia…

“Even though we haven’t actually intervened militarily in Ukraine, by disconnecting [Russia]… we’ve turned it into a long war for survival.

“It’s amazing,” Mr. Robb says, “that Russian disconnection [took only] about a week and a half.”

The upshot? “We’ve brought this up to the edge of a nuclear engagement.

“Something about the Russians that most people don’t know is that [they] don’t have a clear dividing line on when to use nuclear weapons,” says Robb. “They see it as a natural escalation of conventional conflict, that if they’re losing… they would use tactical nukes.”

He adds: “If Russia feels sufficiently threatened, if it needs to find a way to break up the blockade, this disconnection, we may see nuclear weapons used in Ukraine.” In the meantime, “Beset by the crisis, what we’re seeing is that a lot of countries — China and Russia, in particular — are using the network.

“In the West, we’re seeing the network being given carte blanche by [governments] to stabilize the system,” Robb says.

“Our traditional form of government is being hollowed out,” he says, and spinning out of control with fewer decision-making powers to solve each new “perma-crisis.” The way he sees it: “The government is basically letting corporations do this for them.” We’ll include corporate and social media in his assessment… And throw in the deep state, while we’re at it.

The function of this part of the network is “the capability of setting moral… standards of right and wrong across the board. We’re talking about far-reaching views that… are being forced on us,” Robb says. Most recently, he notes Google’s subtle free-speech intrusion… 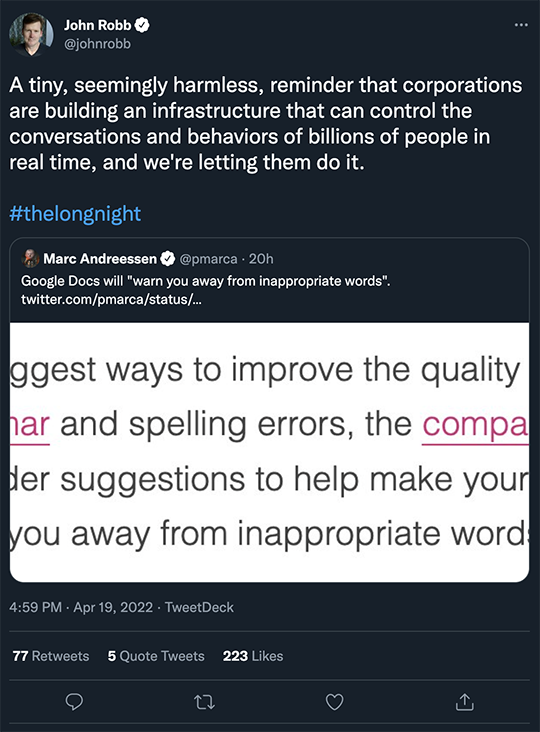 The peril to your life, liberty and livelihood shouldn’t be underestimated…

In a world where “terms and conditions” agreements are weightier than the U.S. Constitution, “if you disagree or you try to push back,” Robb says, “you’re… censored and disconnected.

“Being disconnected in this environment where everything’s online is like becoming a non-person, [it’s] like an ultimate punishment,” Mr. Robb observes. “It’s like an open-air prison.”

At his core, Mr. Robb says he’s an eternal optimist, believing the ship can be righted — not that the Western world will resemble what it once was.

“I’m trying to make sense in a way that allows people to make good decisions.” It might take many years, but he hopes to see a return of “nuanced” thinking and the ability to dissent without resorting to hard-line tribalism. “I see dissent not only as a pressure valve,” Mr. Robb concludes, “it’s an essential element of society.”

[Watch the complete interview, as our founding editor Addison Wiggin has a freewheeling discussion with John Robb, author of Brave New War. To gain a deeper understanding of the hidden forces at play, this episode of The Wiggin Sessions is for you.]

Then there’s the Netflix-burdened Nasdaq, down 0.86% to 13,500 — not as dramatically in the red as one might suppose, considering Netflix shares have cratered about 37% as we write today.

The streaming service reported earnings yesterday evening, and for the first time in a decade, Netflix lost subscribers in the first quarter of 2022. Perhaps that’s because… 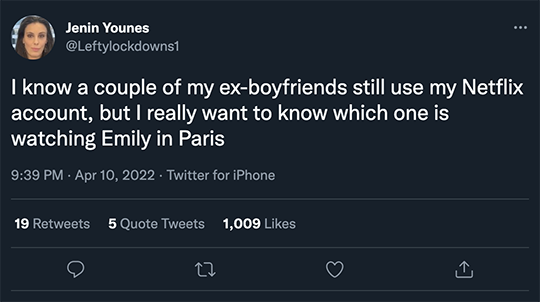 “Netflix estimated that 100 million households are sharing their subscription passwords with other family or friends,” CNBC says, something the company vows to clamp down on. 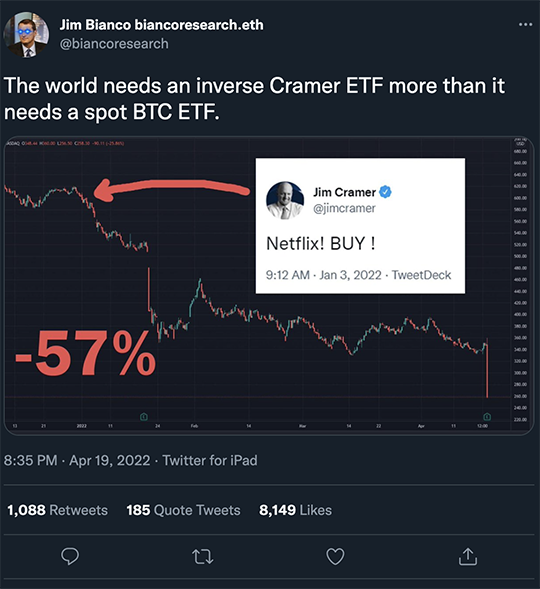 Although — in terms of entertainment value — Cramer’s epic televised meltdown in 2007 ranks up there with Jim Mora’s “Playoffs!” Q&A.

For more precious metals in the news…

Another metal detectorist has scored — big-time — in Switzerland: Last September, amateur archaeologist volunteer Daniel Ludin zeroed in on a cache of 1,290 fourth-century Roman coins — made of copper alloy and silver — in the forest near Wildenstein Castle. 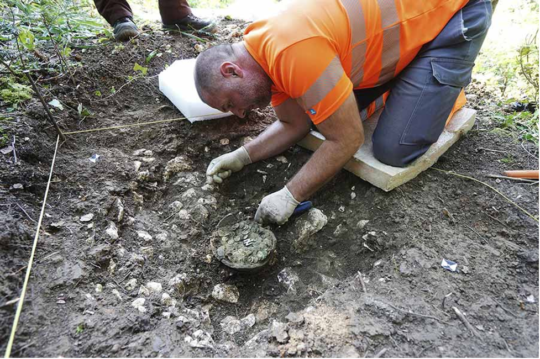 “The discovery has just been revealed by Archaeologie Baselland, which said that as soon as Ludin realized the importance of his find, he carefully covered up the coins he had unearthed with some pottery fragments and contacted them to report it,” says Zenger News.

The Roman coins were struck during Emperor Constantine’s reign (AD 306–337), and they would have been equal in value to one gold solidus or two months salary for a Roman Legion soldier.

Ahem, no word whether Herr Ludin will benefit from his discovery… which typically means nein.

To the mailbag: “I will cite one instance, which I can speak to with confidence, and that is the 5G interference with aircraft altimeters,” says the follow-up on “very active censorship” we promised to make room for today.

“The FCC repeatedly blew it off as nothing, but the issue actually came up as early as 2006. More recently, the FAA challenged the auction of 5G bandwidth due to public safety concerns, but the FCC ignored the challenge and held the auctions anyway.

“According to the FCC, public safety is not their concern. Airlines and the FAA have continued to object and the FCC has claimed that 5G is operational in 40 countries without problems. The rules for 5G implementation are nowhere near as lax in those 40 countries as in the U.S. In fact, many flights from European countries have been canceled due to our 5G implementation.

“Furthermore, despite Verizon voluntarily turning off towers near runways for the time being, over 100 PIREPs (pilot reports) in the first week were logged confirming problems with 5G interference with radar altimeters.

“Instead of acting on this information, the FCC continues to stonewall, and the FAA has had to close 124 runways at major airports for airline use during low weather, and even more for business aircraft.”

[For some context: “When pilots land in poor weather conditions, they rely on the assistance of a highly sensitive instrument called the radio altimeter. The altimeters tell the plane how far it is off the ground,” according to Corporate Crime Reporter.]

“At airports in Chicago, for example, half the runways are closed. Moreover, 12,000 helicopter landing sites are affected, but 8,500 of those are private (hospitals, etc.) and outside FAA jurisdiction.

“Has the public heard anything about it?” our reader continues.

“No, they heard instead that 12,000 flights were canceled or delayed two weekends ago, with a variety of reasons given from weather to computer glitches, etc. Later on, of course, they decided it must be Russian hackers. In reality, it consists of fed-up flight crews refusing to wear masks any longer and to the 5G cancellations due to weather.

“Airlines estimate that reconfiguring their fleets will cost at least $3 billion and take several years. Fortunately, the FAA has taken public safety into account and closed the runways.

“It’s too bad the public hears none of this, just as they heard nothing about the censoring of medical professionals during the pandemic. Public safety is clearly not on the minds of any of our politicians, nor is any form of dissenting information.”

Yet another example of network-ism in action… We’ll be back tomorrow. Take care!