“The NFT market is collapsing,” says an overwrought Wall Street Journal. “The sale of nonfungible tokens, or NFTs, fell to a daily average of about 19,000 this week, a 92% decline from a peak of about 225,000 in September,” the article says.

But could it be NFT investors are becoming more discriminating? Absolutely.

Instead of buying, say, an image of a McDonald’s McRib sandwich (which happened last year), “there are signs that collectors may also differentiate… NFT art projects spurred by major artists who already enjoy museum followings,” WSJ concedes.

At the same time, an article at Cointelegraph points out while the number of NFT transactions might be fewer, the daily volume in USD “on Ethereum NFTs over the week is some of the highest seen since February, with popular marketplace OpenSea seeing nearly $550 million in volume on Sunday alone.” 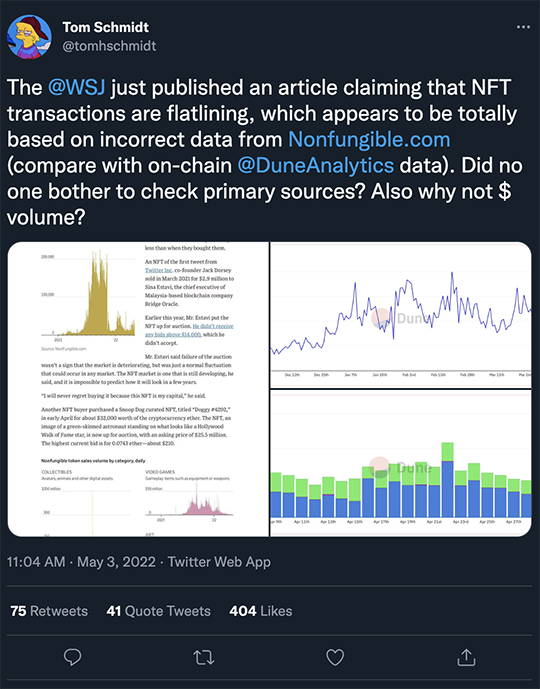 Indeed, why not daily cash-inflow volume? Cointelegraph argues then against the “collapse” of the NFT market, favoring instead a “consolidation.”

Call it what you will, our crypto expert Chris Campbell admits: “From NFTs to DeFi to metaverse, we’re in a bit of a rut.” And in sympathy with the rest of the market today (more on that later) Bitcoin and Ethereum have both staggered about 7% at the time of writing.

Says Chris: “The ugly truth about crypto that few in this space want to admit…

In fact, while the Western Hemisphere approaches summer, he says: “Crypto winter is coming…

“This feels a lot like 2017,” he notes. “Back when Bitcoin was slowly reaching for its all-time high of $20,000… and most people still hadn’t heard of Bitcoin.

“The entire crypto space was becoming insanely delusional,” Chris adds. “I became disenchanted by the entire space. And then, of course, it all crashed in 2018 and we went through a crushing bear market. Honestly,” he says, “it was needed…

“There’s no better way to demolish illusions (and strengthen resolve) than a bear market,” Chris posits.

“But unlike in 2018,” he says, “the value won’t disappear. It will get sucked into the protocols actually being used — [cryptos] with actual utility, ready for mainstream action.

“And there are more mainstream-ready projects than most people think,” Chris says. “While more than 90% of crypto projects will fall by the wayside, a small percentage will shoot skyward, exceeding all expectations.

“Despite the fear and uncertainty, there are still plenty of reasons to be bullish on crypto,” Chris says, which he and our colleague James Altucher outline in their Big Book of Crypto… Containing everything you wanted to know about crypto, answered in 257 pages.

“What wasn’t expected was Fed chair Jerome Powell ruling out a three-quarters percentage point increase come mid-June… which is what the market had been pricing in for the last couple of weeks.

“Thus, the monster rally in the final couple hours of trading yesterday — the best day for stocks in two years.

“So is it ‘all clear’ from here?” Dave asks. “Entirely possible — but hardly guaranteed.

“The Fed is still doing something it’s never done before — shrinking its swollen balance sheet at a time economic growth is slowing down.

“So it’s entirely possible that more rocky days are ahead — as the market has experienced for much of 2022.

“But if growth slows too much, the Fed could easily lose its nerve and change course,” Dave notes. “In fact, there’s a good likelihood of that happening by the time of the FOMC meeting in mid-September.”

A sentiment borne out in a tweet early this morning…

Ahem, the proverbial dust has not settled well today. That relief rally? Didn’t last long at all… All the major indexes are getting bludgeoned today, with the tech-burdened Nasdaq taking it the worst: down 4.6% to 12,365.

“E-commerce stocks were a key source of weakness,” CNBC says, “following some disappointing quarterly reports. Etsy and eBay dropped 15% and 8%, respectively, after issuing weaker-than-expected revenue guidance. Shopify fell more than 17% after missing estimates on the top and bottom lines.”

Meanwhile, the Big Board and S&P 500 have both lost about 3% market cap.

“I want to explain why higher interest rates can hurt stock prices so you’ll understand what’s going on below the surface,” says Zach.

“While traders often make emotional decisions based on fear and greed, much of Wall Street relies on mathematical formulas to find the ‘fair market price’ of individual stocks.

“The most important formula Wall Street uses is called the discounted cash flow (DCF) method,” says Zach. “The DCF analysis operates under the time value of money principle,” says an article at The Hartford. “This concept assumes that money is worth more today than it is in the future…

“If you’re going to spend $100 to buy something,” for example, “you’re going to want to know how much money you’ll get in return and what that money will be worth in the future. And that’s where the discounted cash flow method can help.

“Put simply,” says Zach, “the higher the interest rate, the less value we put on future earnings. This is particularly troubling for companies that don’t generate earnings today but should in the future…

“Not only are those future profits at risk if the economy pulls back, but they’re also not in your pocket today — when you’d benefit from higher interest rates.” At the same time, “inflation is making future profits worth less and less each day.”

All told? “Higher interest rates will naturally cause Wall Street ‘formula followers’ to favor companies that generate current profits over companies that hope to make profits in the future.

“And that’s exactly why stocks of stable companies are holding up right now while speculative tech stocks are moving steadily lower.

“It’s an important concept to keep in mind as you decide which stocks to hold on to and which ones to avoid,” Zach closes. “Interest rates are likely to rise for years to come. So please make sure you’re invested in companies that are profiting today.”

Since February, “the yen has fallen 12.2% against the dollar,” Jim Rickards notes. “That’s not a modest move. That’s an earthquake…

“The list of serious issues confronting Japan goes on,” he adds. “Inflation? Russia? China? Interest rates? Each of these factors offers at least a partial explanation for the striking weakness in the yen.”

But Jim zeroes in on the latter: “The Bank of Japan is stuck in the same zero-to-negative interest rate rut it has been in since the early 2000s. Even the 10-year Japanese Government Bond (JGB) only yields 0.20% compared to 3.04% for the 10-year U.S. Treasury note today.

“What’s more, that spread promises to get wider,” says Jim. “The Bank of Japan has not announced any policy changes that would suggest higher rates in the near future.” Meanwhile? “Fed policy rate hikes [are] certain to drive the 10-year note rate even higher.

“That spread in favor of the dollar is enough by itself to drive portfolio allocations out of yen and toward the dollar,” he adds.

Then there’s Japan’s debt-to-GDP ratio… an eye-watering 266%. “This is unsustainable,” Jim says, “and has caused weak growth and repeated Japanese recessions since the historic bubble crash in 1989.”

He continues: “Supporters of Japan have always shrugged this off” while “Modern Monetary Theory believers claim that debt-to-GDP ratios are not a problem at all.

“This is contrary to empirical evidence that strongly suggests that debt-to-GDP ratios in excess of 90% will definitely slow growth and lead to hyperinflation or outright default.”

So Jim concludes with a question: “Could this recent crash in USD/JPY be just the beginning of a complete collapse of the Japanese financial system and government bond market?

“We will be monitoring the movement of the yen,” he says, because it could be a harbinger of “Japan’s day of debt reckoning.”

No Ferrari for you! The luxury Italian automaker is said to have banned pop singer Justin Bieber from buying its cars in the future. Or has it?

“The justification for the Bieb’s excommunication according to stories on Sky Sport Italy and la Repubblica and others is that the singer effectively disrespected the Ferrari brand by not looking after his 458 [Italia],” says Carscoops.

Among Bieber’s offenses, customizing the car’s color and allegedly misplacing the vehicle — for three weeks? — at a hotel parking lot in Beverly Hills. And eventually auctioning off the 2011 model for $434,500 in 2017.

Wrong. “The whole thing is pure garbage,” says Carscoops. “You might even have heard the very same story a few years ago.”

Nonetheless, the recycled “story” gives the rest of us plebs an opportunity to gloat… 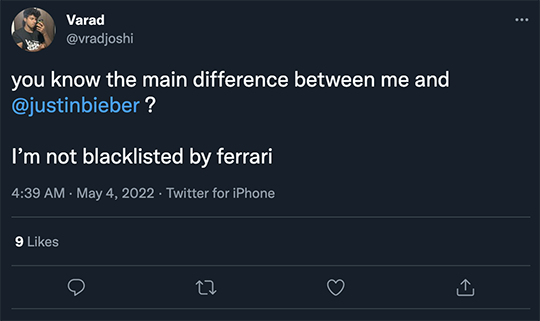 “I’m glad you enjoyed my story about Russian bonds,” our French correspondent adds to his missive yesterday. “Since Dave Gonigam seems to be a history buff like me…

“When President Félix Faure arrived in Russia in 1897, the Russian orchestra performed ‘La Marseillaise,’ which was quite surprising given the local context.

“During WWI, as Russia was burdened by her war effort, the British and French governments temporarily paid interest to holders of Russian bonds.

“And the repudiation of the Russian debt by the Bolsheviks was one of the reasons invoked by Britain and France for their intervention in the Russian Civil War.

“I guess you are aware too that the ‘October Revolution’ happened on Nov. 5, 1917, for the Western world because Russia still used the old Julian calendar. (My grandmother was born on the same day.)

“My maternal grandfather had two family members who sometimes made fun of each other after WWI because one bought Russian bonds whereas the other one invested in the Ottoman Empire railways.”

You all take care… We’ll be back tomorrow.