After a cheery edition of The 5 contemplating nuclear war yesterday, we turn our attention today to… famine.

Yeah, we know, we’re just a fount of unicorns and rainbows this week.

Let’s start with the obvious: “Most analysts are aware that Ukraine and Russia together provide about 25% of all the grain exports in the world including wheat, barley and corn,” says our macro maven Jim Rickards. “That’s a huge percentage.”

But wait: “When viewed from the perspective of importing nations in Africa and the Middle East,” says Jim, “the two warring parties provide 70–100% of the grain imported by those countries.

“Among the largest importers are Egypt, Lebanon, Sudan, Kenya, Somalia, Jordan and many others. Together, those large importers have a combined population of 700 million people, or about 10% of the global population.”

Key point: “There is no ready substitute for those imports,” says Jim.

“The U.S., Canada and Australia are all major grain producers, but they already consume their grain domestically (mostly as animal feed to supply beef and pork) or have existing export markets that also rely on the grain.

“This looming grain shortage is amplified by global shortages of fertilizer, which also comes from Russia to a great extent. Many farmers cannot get fertilizer at all, and those who can are paying two–three times last year’s price.

“That will result in further grain shortages and sky-high food prices as the higher fertilizer costs (and transportation costs due to higher diesel prices) feed through the supply chain.”

Jim’s bottom line: “It’s not a stretch to estimate that the total number who die of starvation as a result of this food shortage will be greater than the total number of people killed on the battlefields of Ukraine.”

The takeaway? Jim put it out there on Twitter last week… 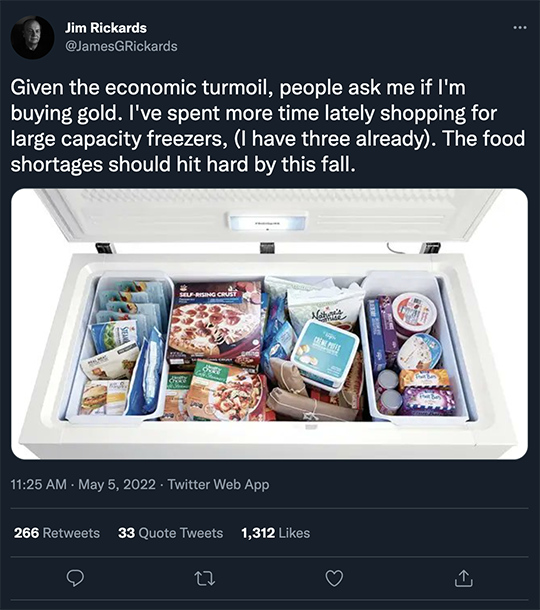 Do it now. When the rationing and/or price controls get underway, it’ll be too late.

To the markets… and one possible explanation for the miserable year-to-date performance of U.S. stocks… 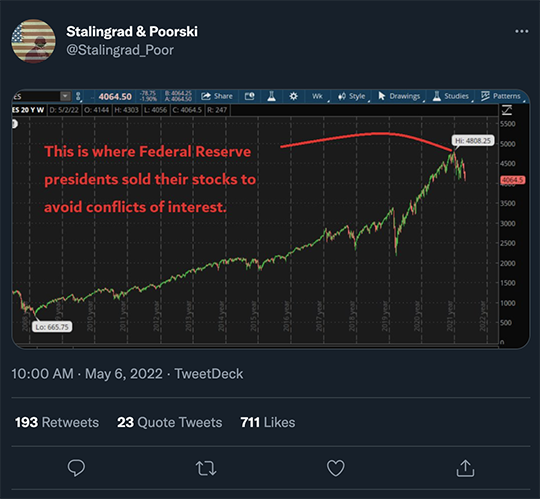 OK, strictly speaking, that’s not true. As you’ll recall, scandal broke out last September when three Fed policymakers resigned after their stock and option trades came to light. In October, Fed chair Jerome Powell laid out a plan barring senior Fed officials from holding individual stocks and bonds. The rules were approved in February and they came into effect 10 days ago.

We don’t trust Fed officials as far as we could throw them… but we’re hard-pressed to see even correlation, much less causation, between the new policy and the slumping market.

Anyway, the S&P is inching its way higher this morning after a sub-4,000 close yesterday — the first since March 31 of last year.

The Dow is barely in the green at 32,274. The Nasdaq is up a half percent at 11,679. Big movers include Peloton — down over 12% after sucking eggs with its quarterly numbers. Really, PTON is the worst of all worlds when it comes to tech stocks: Not only is it unprofitable, it’s not even a “tech” stock once you realize that making exercise gear is a way more capital-intensive undertaking than writing code.

Bonds are rallying strong, pushing yields down: The 10-year Treasury note is back below 3%. Precious metals languish, gold at $1,846 and silver at $21.61. Crude continues to sell off, but it’s still well above $101.

The “whoosh” down in Bitcoin yesterday may have had something to do with trouble in a stablecoin called Terra (UST). Like many stablecoins, Terra is pegged to the U.S. dollar — except that yesterday, it “broke the buck,” and badly. Overnight it sank as low as 66 cents. This morning it’s back to about 90 cents. The scuttlebutt is that Terra’s creators had to dump a metric crapton of their Bitcoin holdings to stop Terra’s bleeding… and the panic extended to the crypto space in general.

As we said in January, crypto is all but guaranteed one 50% drawdown a year. We’re there…

Small-business owners are gritting their teeth and gutting out inflation as best they can.

The National Federation of Independent Business is out with its monthly optimism index. The headline number was unchanged from the month before — a weak-but-not-awful 93.1.

But ugh, the “internals” of this report…

Straw in the wind?

Note this headline from an anonymous Substack account is a month old. For some reason, the Drudge Report chose to link to the article yesterday.

We know from our own informal survey in 2020 that most of The 5’s readership gave up on Matt Drudge long ago. But he still does news aggregation like no one else and he gets tens of millions of page views a month. Your editor still checks the site in case there’s something interesting — only once a day, and only on workdays, for the sake of sanity.

And this is interesting. Drudge’s site hasn’t exactly been a hotbed of vaccine skepticism, after all.

So for Drudge to run a headline saying, “Clinical Trials for mRNA Vaccines Were Fraud?” potentially signals a sea change in public sentiment — and a material risk to Pfizer.

Recall that Pfizer’s COVID vaccine was first approved under “Emergency Use Authorization” — a federal designation that grants the company immunity from lawsuits seeking money damages through 2024.

But under the law that created this scheme — the so-called PREP Act of 2005 — that immunity does not apply in the event of fraud during the clinical trials. And that’s what’s being alleged here. Not for the first time, either: There’s a former BlackRock manager named Edward Dowd who’s staking his reputation on the case for fraud in Pfizer’s trials — which would ultimately be reflected in a cratering PFE share price.

No, that cratering hasn’t developed yet. But if it does, Drudge will have been an interesting signpost on the way there.

A 5 follow-up: All’s well that ends well for Empyreal Logistics — the armored-truck operator that transports cash for cannabusinesses.

In February, we told you how one of Empyreal’s vehicles was pulled over by San Bernardino County sheriff’s deputies in California — who seized $712,000 cash and turned it over to the FBI. They stopped the same driver a few weeks later and seized another $350,000.

All of that money belonged to weed businesses operating legally in California. The FBI asserted the authority to keep the money, saying it was tied to federal drug or money-laundering crimes… but the feds didn’t actually charge anyone with a crime. Furthermore, under the feds’ sleazy “equitable sharing” program, 80% of the money would have gone back to the San Bernardino County Sheriff’s Office. See how that works?

Empyreal sued with the help of the good folks at the Institute for Justice. Last month, the feds agreed to give all the money back. And now comes word of a settlement with the sheriff’s office, announced in a joint press release.

Reason writer Jacob Sullum: “The joint statement avers that the deputies ‘are not highway robbers as previously reported in the media.’ But that remains a fair characterization, since the businesses whose proceeds the deputies stole and Empyreal itself were operating in compliance with state law.” Amen…

To the mailbag, and reactions to our issue-length take on “normalizing nuclear war”…

“Anybody discussing the possible use of nuclear weapons in this war and not condemning that immediately is a dangerous fool,” a reader writes. “Fools with any platform or power are especially dangerous.”

“I usually enjoy your take on finance and politics. I take some of your posts with a grain of salt. This one really raised my eyebrows.

“I get the risk of nuclear war. That said, the risk is virtually zero in my opinion and the opinion of many. They know there are no winners in a nuclear war.

“The U.S. is handling this fairly well by helping an innocent victim of Russian aggression, which has been happening for years. It’s not just the actual military operations, but also the covert operations to destabilize countries, including Ukraine. There is NO justification for invading, destroying and killing without real provocation. Russia is 99% in the wrong. I don’t see how anyone can see it any other way.

“The democratic world has been letting Russia commit atrocities in the name of keeping peace, hoping things will change. It’s time to stand up to him and that’s what we’re doing. This is a fascist regime and movement in Russia that’s not a whole lot different than the Nazi movement that led to World War II.

“Putin went in and stole a part of Ukraine with the invasion of Crimea. He’s been stirring up trouble in the Donbass region, in Ukraine, Moldova and Belarus to name a few instances. It seems incredible that anyone can make a case for not confronting Putin in the case of Ukraine. He invaded Ukraine and to argue that the blame falls on the democratic sphere seems bizarre.

“The free world needs to build strength and take appropriate actions before we fall to the oppression of fascism.”

The 5: We’re seeing an awful lot of takes like yours online these days: “I get the risk of nuclear war. That said…”

American leaders understood that once. That’s why Kennedy and Khrushchev kept talking throughout the Cuban Missile Crisis.

The Quincy Institute’s Trita Parsi laid out the risks in a recent article at (of all places) MSNBC’s website: “While preventing countries from invading their neighbors is a laudable goal, doing so by defanging a country with 140 million people and 6,000 nuclear weapons will not be achieved easily, quickly or through economic sanctions and Ukrainian military prowess alone.

“At some point, it appears inevitable that achieving such a goal will require more direct American military involvement — which in turn, may risk nuclear war.”

We give the last word to Pat Buchanan in his latest column: “America needs to recognize that our objectives in this war are not the same as Ukraine’s.

“President Volodymyr Zelenskyy would like to have the U.S. plunge in and fight alongside Kyiv, devastate and defeat the Russian army and expel Russia not only from the regions invaded this year but also from Crimea, which Putin annexed in 2014.

“America’s vital interests in this war, however, are to prevent it from becoming a U.S.-Russia war or a third world war or a nuclear war.”