Sometime today, Joe Biden will sign a bill acknowledging the United States is at war with Russia — a provocative act with even more provocative timing.

Today is one of those days we momentarily avert our gaze from the markets and the economy — even amid the present turbulence — because as we’ve said for nearly six years now, there won’t be any markets or economy for us to talk about if the globe is pockmarked with smoldering radioactive craters.

Well, with one critical distinction… 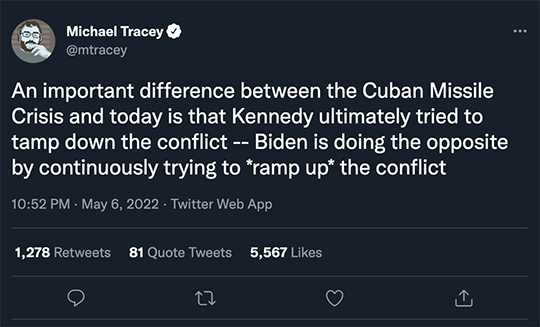 And so, Biden is signing a modern-day version of the Lend-Lease bill to supply additional weapons to Ukraine’s government.

“Lend-Lease,” former State Department adviser James Carden reminds us at the Asia Times site, “was the brainchild of Franklin D. Roosevelt as a way to get around the series of Neutrality Acts passed by Congress in the 1930s, in order to help supply the British war effort against Nazi Germany.”

FDR signed Lend-Lease into law on March 11, 1941. Whether everyday Americans realized it or not, America was hip-deep in World War II nine months before Pearl Harbor.

On the one hand, the present-day legislation is mostly symbolic, as Carden writes — “a way to signal to U.S. arms manufacturers that constitute much of the political donor class that the money spigot will remain wide open for the foreseeable future.”

➢ The vote in the House was 417-10. Every vote against the bill was Republican. Not one “progressive” member of Congress voted nay — not AOC or anyone else from “the Squad,” not even Rep. Barbara Lee (D-California). Lee cast the lone vote against the “authorization for use of military force” after the Sept. 11 attacks in 2001.

But on the other hand… signing the bill today amounts to Biden poking a finger in Vladimir Putin’s eye. Which is almost surely the idea.

As you’re no doubt aware if you’ve checked the news today, Moscow is holding a huge military parade — something it does on this day every year to mark the Soviet victory over the Nazis in World War II. The conflict took a staggering 27 million Soviet lives, close to 19 million of them ethnic Russians. As we said when we took note of the 70th anniversary in 2015, we Americans simply can’t relate to the scale of death experienced by Russians in WWII.

If Lend-Lease is mostly symbolic, the symbolism of signing it today is surely not lost on Putin.

As provocations go, it’s a minor one. But it’s another in a long line in the process of “escalation” toward nuclear war.

“No one wakes up in the morning and says, ‘What a nice day for a nuclear war. Let’s launch some missiles,’” says Jim Rickards.

“Experts who have studied the subject of nuclear warfighting since the 1950s (and I’ve personally studied their work since the late 1960s) all agree that the danger is not an out-of-the-blue decision to launch. The danger is escalation.

“The adversaries will first go through a process of confrontation and gradual escalation to the point that one side or the other feels trapped with no way out except to use nuclear weapons.

“At that point, game theory is applied to infer that if your enemy is about to launch nuclear weapons against you, it’s in your interests to launch first. That’s because suffering a first strike might make you incapable of launching a second strike in retaliation.

“The solution is to launch a first strike before the other side launches its first strike. You can build a capability that will survive a first strike and launch a second-strike retaliation, but you cannot be sure it will work, and your adversary might have increased its first strike capability, etc. The entire game theoretic framework pushes both sides to a nuclear attack even though neither side wanted that.

“The real answer is to avoid escalation in the first place.”

Instead, Washington is doing everything it can to escalate — or as House Speaker Nancy Pelosi said in pushing Lend-Lease, to “decimate Russia.”

Decimating Russia? Or even “weakening” Russia — as Defense Secretary and ex-Raytheon board member Lloyd Austin said?

Talk about moving the goalposts. What happened to helping Ukraine prevail and fend off the Russian invaders?

What happened was a bait-and-switch — comparable to the one U.S. government officials pulled during the pandemic.

A few weeks ago it was “conspiracy theory” to assert that Washington is waging a proxy war in Ukraine. To say so was to “amplify Kremlin talking points” — seeing as Russia’s Foreign Minister Sergei Lavrov has said the NATO alliance “in essence, is engaged in a war with Russia through a proxy and is arming that proxy.”

That was then, this is now: Last week, a piece in The New Yorker said the United States is engaged in “a full proxy war with Russia.”

Also last week, Rep. Seth Moulton (D-Massachusetts) — a member of the House Armed Services Committee — told Fox News, “We’ve got to realize we’re at war. And we’re not just at war to support the Ukrainians. We’re fundamentally at war, although it’s through a proxy, with Russia. And it’s important that we win.”

“How fast did that happen?” writes the media critic Caitlin Johnstone. “How fast were we paced from ‘It’s Russian propaganda to call this a proxy war’ to ‘Obviously this is a proxy war and we need to make sure we win’?”

We have an answer for Ms. Johnstone: About as fast as it took to go from “Three weeks to flatten the curve” to “Must stay locked down until there’s a vaccine.”

Then again… as we said a few weeks ago, even before the war began the goal was ultimately regime change in Moscow.

Sen. Lindsey Graham (R-South Carolina) said as much yesterday on the Sunday talk shows. There’s no chance of a negotiated settlement and the war ends only with Putin gone: “If Putin is still standing after all this, then the world is going to be a very dark place.”

At the outset, the hope in Washington was that the pain of economic sanctions would be enough to make everyday Russians rise up and overthrow Putin.

Instead, they’ve backfired spectacularly. Jim Rickards said they would the day of the invasion. And as we write this morning, the ruble is the best-performing major currency in the world against the dollar year to date.

With the sanctions an utter failure, Washington has turned to — there’s that word again — escalation.

Yes, there’s the military aid — at least $4.8 billion to date, with Congress set to pass another $20 billion by Memorial Day.

But if Putin does rise to the bait, bringing us closer to the nuclear brink… well, some folks in the foreign-policy “blob” seem to think that’s alright…

That was the headline to an Op-Ed piece in The Wall Street Journal by a former deputy undersecretary of the Navy under Ronald Reagan. (So much for Reagan’s assertion that “a nuclear war can never be won and must never be fought.”)

“I don’t think we should be deterred by this fear that [Putin’s] going to reach for nuclear weapons,” she said last week on the PBS NewsHour.

“We cannot rule it out. I’m not dismissing it. But I also think that the objective that we have right now, the stakes are so high. It’s nothing less — it’s not just about Ukraine. It’s about the international order.” 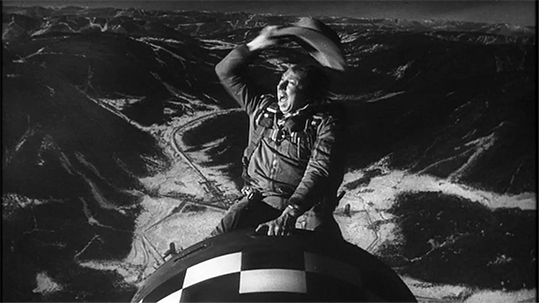 Hollywood trivia: Peter Sellers was originally cast to play this character in addition to the three others he portrayed in the final cut.

Sheesh… and we were joking two months ago when we said the power elite thinks that tens of millions of Americans glowing in the dark would be an acceptable trade-off for “owning Putin.”

If somehow the world gets out of this Washington-Moscow showdown in one piece… well, there might well be a sequel in the works between Washington and nuclear-armed Beijing.

As recently as last Tuesday, language was still there describing Washington’s official stance since 1979, “acknowledging the Chinese position that there is but one China and Taiwan is part of China.” It added directly: “The United States does not support Taiwan independence.”

Sometime between Tuesday and yesterday, that language was stripped out.

In its place was this: “The United States has a long-standing one China policy… Though the United States does not have diplomatic relations with Taiwan, we have a robust unofficial relationship as well as an abiding interest in maintaining peace and stability in the Taiwan Strait.”

Not nearly as emphatic, no?

Bertrand sees a rough parallel between the one-China pledge made to Beijing in 1979… and the promise made to Moscow in 1989 that the NATO alliance would not be moved eastward toward Russia.

We won’t rehash the history of how that promise was progressively broken by every president from Clinton forward. Suffice to say that intelligent diplomacy could have easily prevented Putin’s invasion of Ukraine. It wouldn’t have been that hard — Austrian-style neutrality for Ukraine, a promise to keep Ukraine out of NATO and autonomy for Ukraine’s Russian-speaking Donbass region on Russia’s border.

Putin didn’t invade Ukraine for the sake of conquest. He felt Washington backed him into a corner. (Given Washington’s escalation, he might be aiming for conquest now.)

Nor would mainland China invade Taiwan for the sake of conquest. A successful invasion of Taiwan would require an amphibious assault on a scale that makes D-Day look like a minor skirmish.

But if Xi Jinping feels his back is against the wall… who knows?

That’s all in the future, though. Let’s see if we can get through the present in one piece.