It’s beautiful… awe-inspiring… and apparently not a harbinger of market mayhem? 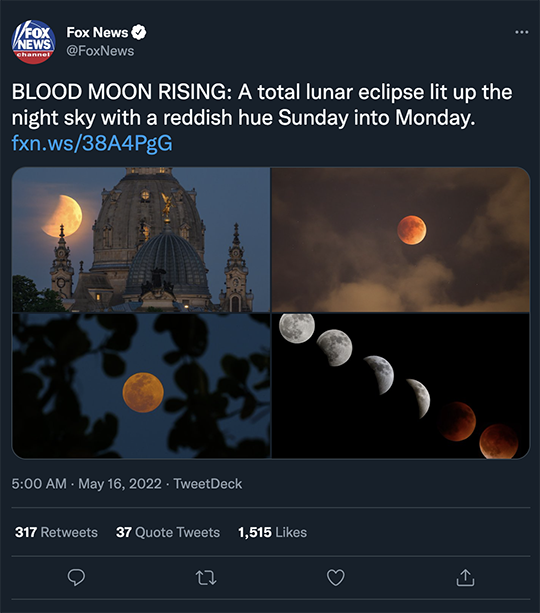 A casual search of Google News turns up precisely nothing about the blood moon overnight as an ill omen — in the markets or anywhere else.

We recall doom prophecies abounded with a couple of blood moons that occurred in 2015. “Blood Moon Market Meltdown This Weekend?” said a headline in April. (Didn’t happen.) CNN told us how “to some Christian ministers,” a follow-up blood moon in September “fulfills biblical prophecy of the Apocalypse.” (Also didn’t happen.)

We do, however, happen to be smack in the middle of a Puetz window.

Turns out every one of them took place within a few days of a full moon/lunar eclipse. Puetz ran the numbers and concluded the odds of these circumstances being sheer coincidence were 127,000-to-1.

He also hastened to point out that while epic crashes occur during Puetz windows, not every Puetz window results in a crash.

That said, the current Puetz window runs through Wednesday.

No crash today, but Friday’s dead-cat bounce didn’t have any staying power through the weekend.

➢ The lone economic number of the day is our first glimpse into the month of May — and it’s not good. The Federal Reserve’s Empire State Manufacturing Index indicates New York state factory activity is back in the red at minus 11.6. Among dozens of economists polled by Econoday, no one was expecting a negative number. 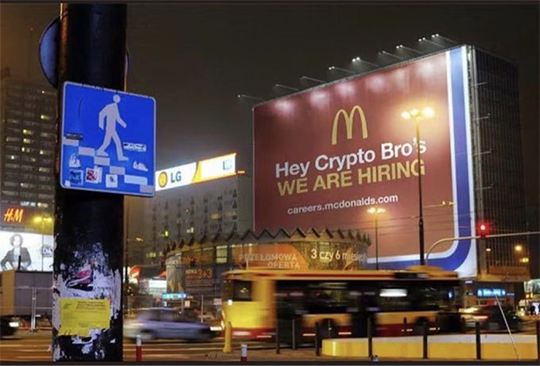 If McDonald’s is hiring, does that include proofreaders?

Except that after poking around a bit, we discovered that photo is from six months ago — when Bitcoin was still near its all-time high around $69,000. Hmmm…

Anyway, Bitcoin is back below $30,000 this morning. And Ethereum is about to break below its own round-number psychological support at $2,000 again.

The finger-pointing is well and truly underway for the disaster that befell the stablecoin Terra and its sister coin Luna last week.

Here’s the Monday-morning quarterbacking from Sam Bankman-Fried, the 30-year-old founder and CEO of the crypto exchange FTX… 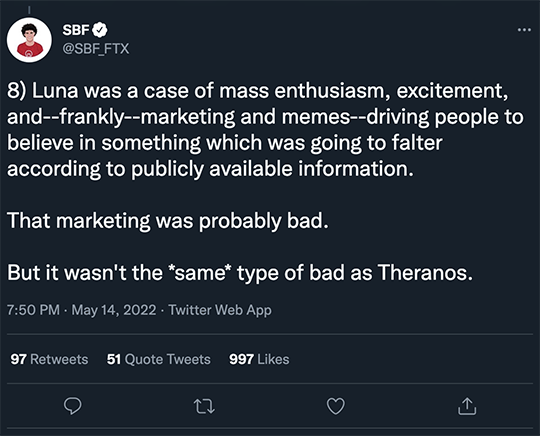 … for which he was rightly roasted.

As crypto entrepreneur Cory Klippsten put it, “If you believe this: ‘something which was going to falter according to publicly available information’ then why did you list it?”

On Friday, our resident crypto evangelist James Altucher dropped everything for an urgent briefing with publisher Doug Hill. Aside from the question of whether last week really amounted to crypto’s “Lehman moment” akin to the 2008 financial crisis, James also tackled…

Speaking of Ukraine and Russia, it is now highly likely that U.S. forces are fighting inside Ukraine.

As James Carden writes at Asia Times, “While Biden remains steadfast in assuring the public that there will be no ‘boots on the ground,’ in point of fact, current and former officials have suggested that U.S. paramilitaries are indeed on the ground, with military assistance being coordinated by the new appointee to the Biden National Security Council, retired U.S. Army Lt. Gen. Terry Wolff.”

Says Wilkerson of the Biden administration: “They are extremely desirous of a protracted conflict because they want to effect regime change in Moscow, destabilize Russia and then take on China. That is their long-term geopolitical strategy.”

Wilkerson is not being hyperbolic when talking about China. Check out one of the “highlights” from the Sunday talk shows yesterday… 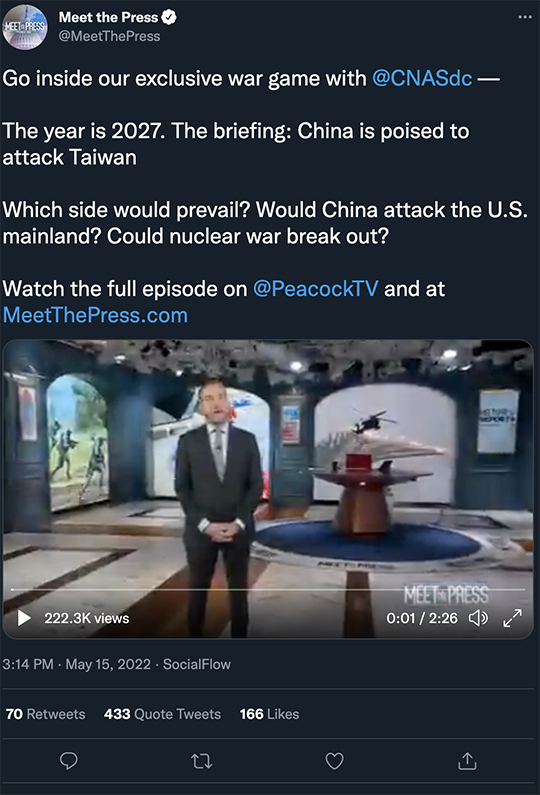 “Creepy,” remarks independent reporter Michael Tracey. The war game was “conducted by one of the many weapons manufacturer-funded D.C. think tanks, in which the U.S. launches a direct war against China. Almost like they’re conditioning the public to accept this as an inevitability.”

Then again, given the economic numbers from China, regime change just might happen organically — as our own macro maven Jim Rickards notes… 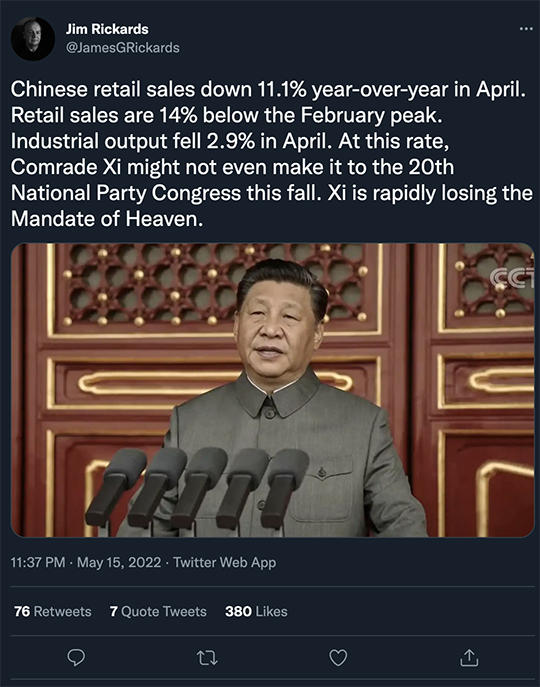 Oh, and jobs: With lockdowns in Shanghai and elsewhere, unemployment is back up to 6.1% — very near the 6.2% peak at the start of the pandemic in early 2020. Chinese Premier Li Keqiang describes the job situation as “complicated and grim.”

As Jim recounted in his first book Currency Wars, Chinese communist leaders are just as reliant as the emperors of old on public perception that they have the “Mandate of Heaven” to rule.

Thus, their obsession with keeping people employed. People with jobs don’t take to the streets and protest. “No one knows better than the Chinese Communist Party leadership what would happen if… jobs were not available.”

And while we have China and Russia on the brain, we hear from a reader in France — harking back to last week’s mailbag.

“You have one more reader who wrote about ‘fascism’ in Russia. Actually, Putin clearly doesn’t imitate Hitler but Stalin. He openly takes pride in being a former KGB officer. It’s a fundamental mistake (unfortunately often made nowadays) to label as ‘fascist’ anyone who behaves undemocratically.

“Like Stalin in Poland and Finland in 1939, Putin hypocritically pretends not to make war and to be just willing to help local people (‘to liberate Ukraine from Nazism’). When the Soviet air force bombed Finland, Molotov (Stalin’s foreign minister) even declared that Soviet aircraft weren’t dropping bombs but… food as humanitarian help. That’s why Finnish soldiers ironically dubbed ‘Molotov cocktails’ the bottle firebombs used to destroy Soviet tanks (as ‘a drink to go with his food parcels’).

“The Nazis didn’t waste time pretending to ‘help’ their neighbors. They just brutally invaded other countries to subdue them. They were never shy about establishing their domination.

“One remark on Putin: it’s quite possible that like the Argentinian junta with their ill-fated invasion of the Falkland Islands in 1982, he meets his nemesis (and final downfall) in Ukraine.

“You sometimes had other commentators who treated the ‘wokes’ as fascists. Actually, today’s ‘wokes’ behave much more like the Red Guards of the Chinese Cultural Revolution, who did their best to destroy traditional culture. Unlike the Nazis, those Communists tried to brainwash even their enemies and to convert everyone to their Marxist creed. Their goal was mind control.”

The 5: As long as you brought up Finland…

Shortly after Russia invaded Ukraine, The Atlantic (of all places) published an intriguing exploration of Finland’s armed neutrality — a policy brought about after the “Winter War” of 1939–40.

As the strategist Edward Luttwak describes that campaign, “Do not try to stop the invasion. Wait for them to enter your country. Once the tank stops rolling forward, let the soldiers come out to cook or to pee, and then kill them.”

In other words, guerrilla tactics of the sort that helped win the American Revolution — and helped drive later generations of Americans out of Vietnam and Afghanistan. Result in Finland: Russian casualties outnumbered Finnish casualties by as much as 7-1.

Finland’s stance for the last 70 years “prepares civilians to be ready to join their unit and harass and kill invaders,” as Atlantic writer Graeme Wood lays out. “A country of Finland’s size can rapidly field nearly 1 million trained soldiers.”

Sounds a lot like the Swiss model — which fended off Hitler for the duration of World War II, even as the Swiss were surrounded by Axis powers.

Now Finnish leaders appear ready to throw all that away and cast their lot with NATO — adding 830 miles of frontier on Russia’s border for which America will be responsible. Sweden will follow suit.

At best, Putin will move some of his nuclear weapons closer to NATO territory. At worst, as Jim Rickards tweets, “Russia will likely invade both to prevent NATO membership.”

On the subject of student debt: “What about us parents that did not take out loans to put our kids through college and paid it in full as they progressed year to year?

“Where is my refund for not taking out a loan and paying for both of my kids’ education with my monthly paycheck?

“Student loan forgiveness is ridiculous. I am still waiting for my refund check for putting both of my kids through college and paying for it with no loan!!!

“Thank you very much, federal government.”

“Let me see if I’ve got this straight,” reads our next entry — after we entertained the notion of price controls on energy.

“Federal government makes oil infrastructure investment (capitalization) risky through actions such as derailing an oil pipeline construction project that was almost complete (all the money had been spent). They repeatedly demonstrate a callous disregard for sunk costs into long-term oil development projects such as drilling offshore or ANWR/North Slope.

“Thus they cause a big problem. At least in Argentina they would have had the decency to steal the investment by the private company and at least utilize it somehow.

“They get lucky and can blame it on Russia somehow.

“Then they decide to ‘fix’ the impact of high oil prices by….doubling down on more government interference through price controls.

“They had one job, ‘Don’t **** it up,’ and they failed in ways that demonstrate gross incompetence and a total disconnect from reality.”

The 5: Pretty much. One of these days we need to dive into the preposterous story of U.S. policy toward Venezuela amid this whole cluster…

Bonus content: While Wall Street’s biggest tech bull is forecasting $180,000 Ethereum by 2030 — again, it’s on the verge of cracking below $2,000 this morning — James reveals the shocking reason why that $180K figure might be low. 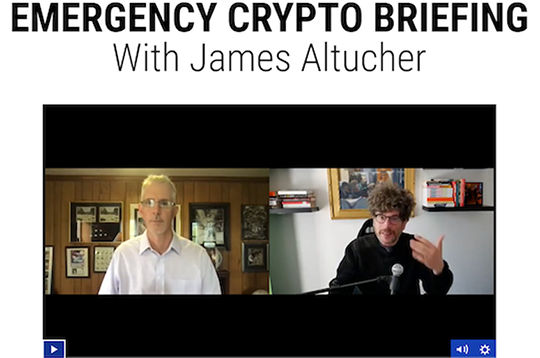 While stocks, bonds, gold and crypto are struggling… grains are rallying big-time. Wheat is trading “limit up” in Chicago — not quite at the early-March highs, but close.

Over the weekend, India’s government banned wheat exports — seeing as domestic wheat prices are at record highs thanks to a heat wave.

So much for Prime Minister Narendra Modi’s promise only a few days ago that “India was ready to feed the world” and fill the void left by collapsing wheat exports from Ukraine and Russia.

The news was received poorly by agriculture ministers from the G7 countries meeting in Germany: “If everyone starts to impose export restrictions or to close markets, that would worsen the crisis,” tut-tuts Germany’s food and agriculture minister Cem Ozdemir.

No relief coming from the United States — where it looks as if the crop of hard red winter wheat will be its poorest since 1963.