“The measure… would give the Federal Trade Commission the power to issue penalties for price gouging, according to a summary of the legislation,” Bloomberg reports, “[and] would prioritize penalizing larger companies, while protecting independently owned gas stations.”

At a press conference yesterday, House Speaker Nancy Pelosi blustered: “Price gouging needs to be stopped. This is a major exploitation of the consumer.” 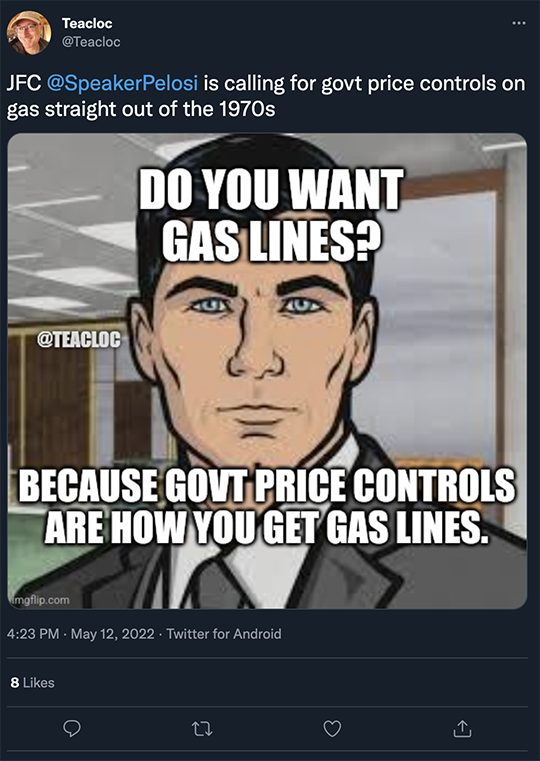 Though the measure will probably get filibustered in the Senate… you can see the trajectory, right?

Quick reminder: “The reason most economists are skeptical about price controls is that they distort the allocation of resources,” says economist Hugh Rockoff.

“When the U.S. government set maximum prices for gasoline in 1973 and 1979, dealers sold gas on a first-come-first-served basis, and drivers got a little taste of what life was like for people in the Soviet Union: They had to wait in long lines to buy gas,” he says. “The true price of gas, which included both the cash paid and the time spent waiting in line, was often higher than if prices were not controlled at all.”

Rockoff concludes: “To paraphrase a remark by Milton Friedman, economists may not know much, but they do know how to produce a shortage.” Stand back kids, career politicians do too!

Nonetheless, the House measure “allows Democrats to show that they are trying ‘do something’ to halt the rise in gas prices ahead of the midterms,” National Review points out. “The problems it may cause over the longer term, well, those are for another day.”

Our macro expert Jim Rickards adds: “You don’t need to be a professional statistician to conclude that changes in oil prices are one of the most powerful drivers of the CPI.

“Oil has a long-established correlation with the inflation rate (CPI). Consider this chart, drawn from the St. Louis Fed database. It shows the dollars-per-barrel price change in red, on the left axis, and the official CPI in blue, on the right axis: 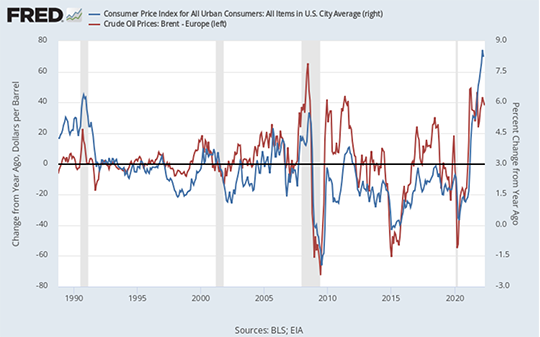 “Mainstream Keynesian economists have a hard time grasping this, but a supply-side investment boom — especially in oil and gas drilling — would help push inflation lower in an economically friendly fashion,” Jim says.

“If we don’t see a rebound in oil capital investment, the Fed will feel compelled to continue smashing the demand side of the economy with a hammer.

“This is just common sense when you think beyond ‘pain at the pump’ to all the direct costs of oil that are embedded in the global supply chain,” says Jim.

“The complexity of the global supply chain is dizzying…

“You can’t undercapitalize an industry like [the oil industry],” Jim continues, “and not expect tight supplies.

“Oil companies are not reinvesting enough cash flow back into new drilling projects. And boardrooms at smaller oil and gas companies have a different philosophy… 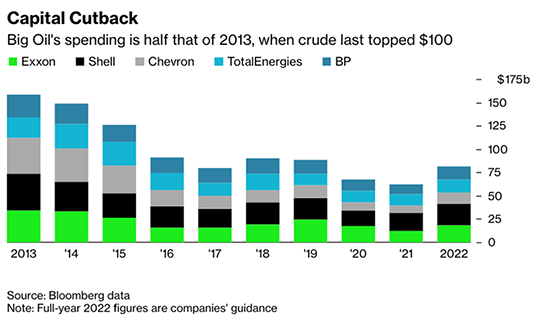 “Priorities have shifted dramatically from ‘Grow production at all costs!’ to ‘Live within our means, don’t borrow and hike stock buybacks and dividends.’

“In a capital-intensive industry like oil and gas, the result is a bumper harvest of free cash flow in the short term,” Jim says. “But the long-term trade-off is that oil and gas consumption will be biased to the downside.”

Jim concludes: “Unless oil prices — and CPI — start falling soon, we’re looking at more painful measures from the Fed to the demand side of the economy, delaying the return of the dovish Fed that stock market bulls know and love.”

The upbeat stockbrokers are back, baby… 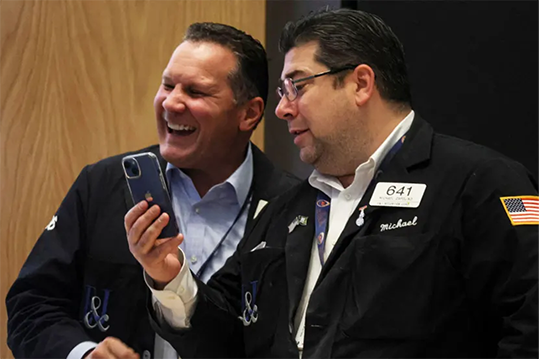 The odds Elon Musk will buy Twitter are even slimmer today… 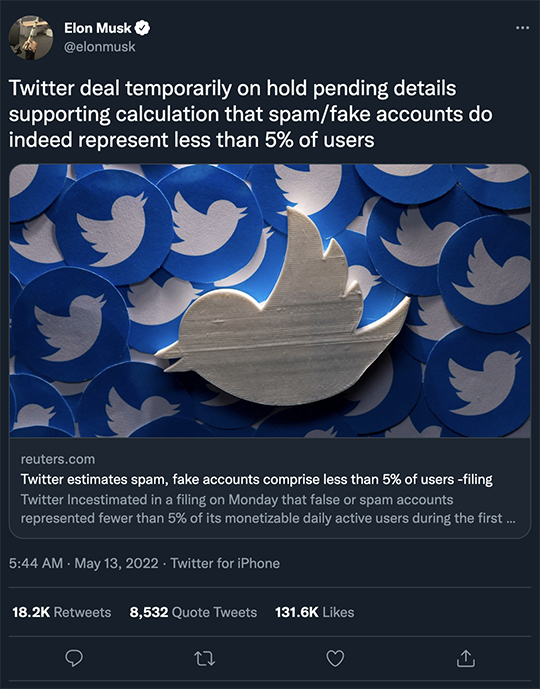 Look, though it gave the financial media something to obsess over the past few weeks, the Twitter buyout was never a done deal.

And today, Musk’s tweet links to a nearly two-week-old Reuters article about Twitter’s estimate of fake “bot” accounts that Musk vows to eliminate if/when he owns the social media giant. 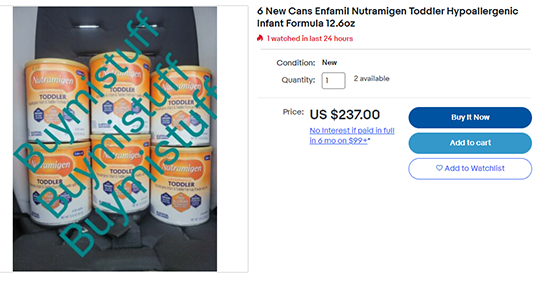 [Not helping matters? And this is deplorable: Two infants died after ingesting bacteria-tainted formula made by Abbott Nutrition; so in February, the company recalled three popular baby products.]

The “[out-of-stock] rate increased another 9 percentage points in just three weeks in April, and now stands at 40%.”

Reason notes: “U.S. officials could have made such shortages less likely by approving baby formula that is widely available in Europe, but per usual, the Food and Drug Administration (FDA) has other priorities.

“The agency has a long history of taking forever… to approve foods and medications that European officials have already decided are perfectly safe for human consumption.”

Then there’s the trade agreement formerly known as NAFTA…

The U.S. “[restricts] imports of formula from most ‘free trade’… agreement partners, including major dairy-producing nations like Canada,” says an article at Substack publication Capitolism.

“In fact, a key provision of the renegotiated NAFTA — the U.S.-Mexico-Canada Agreement (USMCA) — actually tightened restrictions on Canadian baby formula.” 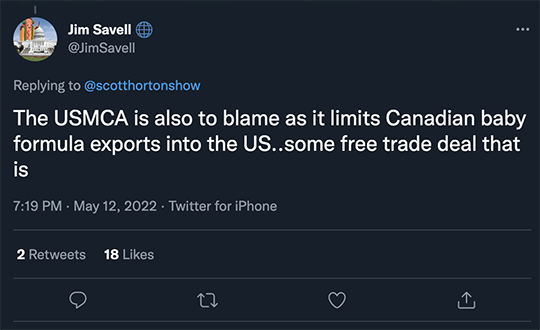 “Because USMCA effectively capped possible exports of infant formula to the United States, it discouraged investment in new Canadian capacity — capacity that we sure could use right now.”

Since NAFTA was renegotiated in November 2018, we’re in year four.

A tin of baked beans (a very British thing) has become a cri du coeur against rampant inflation. 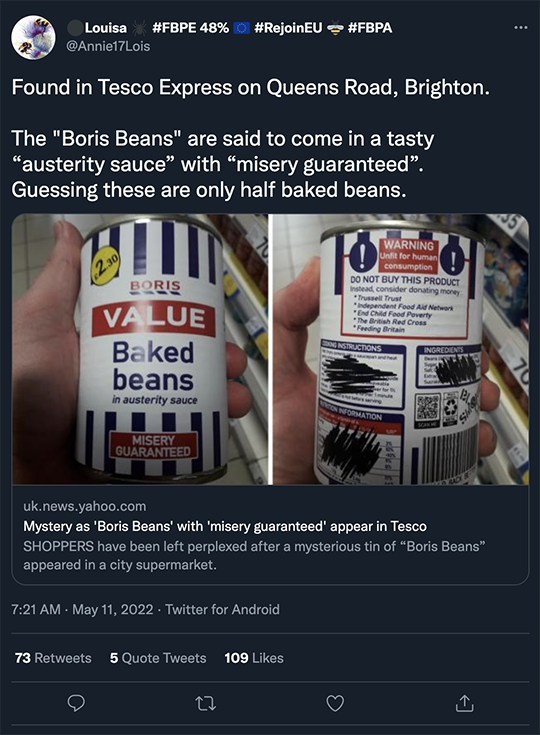 The blue-striped can, at first, appeared to be a generic grocery-store item, but on closer inspection, the label for “Boris” beans warned it’s “not safe for human consumption.” Priced at £2.30 (or $2.80), the can’s label instead urges store patrons to donate to several British charities to ease food insecurity.

Heh… Can “Brandon” beans be far behind?

“Just heard from a reliable source that 50% of student loans are for grad students. You know, those who are getting advanced degrees in ‘gender transition psychology,’ etc.

“Why should any taxpayer support those pursuing advanced degrees, especially when over 50% of ‘educable students’/similarly aged taxpayers do not go to college? It goes without saying that they sure would not want to pay for any loan forgiveness.

“I must be a crank, but it seems that if you value your goals enough to pursue lofty dreams, you should have to pay for them. Perhaps if you knew going forward that you would be responsible for any borrowed money, you would be more careful.”

In postscript, our reader adds: “I paid back all my student loans.”

“There’s no way to tell from reading it these days, of course, but back when I was a kid, The Guardian (then affectionately known as The Grauniad due to its notoriously bad proofreading) was a somewhat serious newspaper.

“Why does everything go fecal?

“Still, while I’m not familiar with columnist Nick Cohen, I find it interesting to see what Pete Buttigieg will look like after another 20 years of simmering frustration.

“Please excuse the cattiness. It’s been a long week… Love what you do.”

Hey, not only do we excuse the cattiness, we embrace it.

Try to have a good weekend… And give Saturday’s highlight issue a read — the intro covers oxymoronic “government assistance” in California.