Try as one might, you can’t get away from them — headlines in the Establishment media about the strong U.S. dollar:

But those headlines beg the question — strong compared with what?

“When investors need a quick proxy for dollar strength or weakness they most frequently turn to the U.S. dollar index (DXY),” explains our macro maven Jim Rickards. 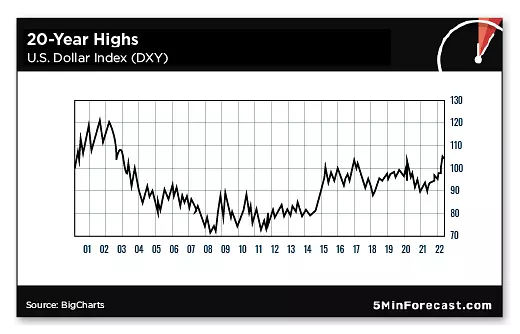 Just one problem — the makeup of the DXY. It’s heavily skewed toward America’s European trading partners. Heck, the euro accounts for over 50% alone… 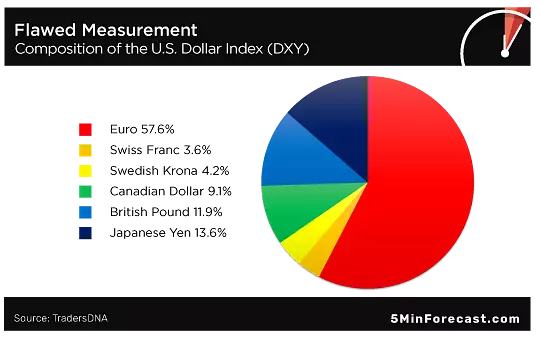 There’s no emerging-market presence. No Chinese yuan, Indian rupee, Brazilian real or Russian ruble (which, by the way, is still at year-to-date highs against the dollar, sanctions notwithstanding).

“If you use a more objective measure of dollar strength — the dollar price of gold — you discover another dynamic,” Jim goes on.

Yes, there was volatility along the way, but “what remains striking is that the dollar/gold cross-exchange rate has turned out to be unchanged over a challenging year of pandemic, war and inflation.

“What this implies is that the rise in DXY is not really about dollar strength (otherwise we’d see a much lower price of gold). It’s about the weakness of the other currencies in DXY.”

Yep. As Jim pointed out here a couple of weeks ago, the dollar is the proverbial cleanest shirt in the dirty-clothes hamper.

Speaking of those three currencies, let’s take a quick survey of their performances — seeing as they’re the DXY’s three biggest components:

“In short,” says Jim, “dollar strength is not the best description of the rise in DXY. The index should properly be viewed as a measure of weakness in major trading partners of the U.S. The more accurate analysis is to think of the dollar as standing still (as indicated by the dollar price of gold) while major currencies crash all around it.

“This perspective has major implications for the dollar and the global economy,” Jim concludes.

“When that happens, the U.S. will take drastic steps to weaken its own currency in a new version of the currency wars last seen in 2011 when the dollar hit an all-time low.

“If the U.S. engages in a currency war our trading partners will not stand still. They will fight back with efforts to weaken their own currencies as always happens.

Wall Street is on a seesaw of late — down one day, up the next. Today is an up day.

In this mildly risk-on environment, bonds are selling off — pushing yields higher. The yield on a 10-year Treasury note is back to nearly 2.96%.

Bitcoin is back above $30,000 and Ethereum back above $2,000 even as the finger-pointing about the meltdown in stablecoins persists.

On one side of the ledger, the latest volatility in crypto doesn’t exactly reinforce the argument that it’s superior to fiat currency… 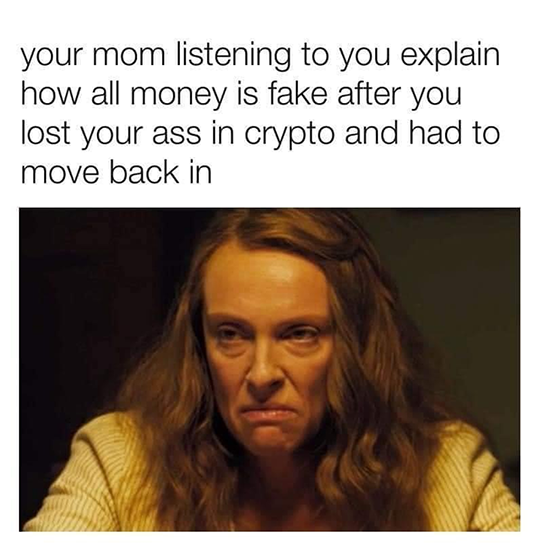 … but on the other side we see El Salvador’s President Nayib Bukele — who made Bitcoin an official currency alongside the U.S. dollar last year — has not lost faith. Indeed, he’s convened a Bitcoin conference with central bankers from dozens of developing nations in attendance. 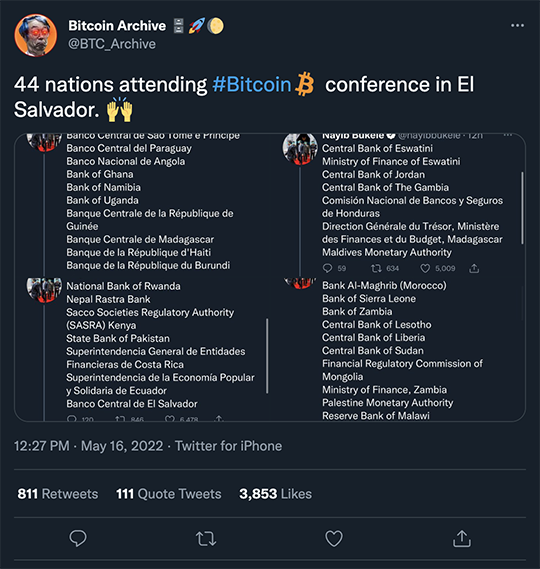 Scanning the list, the country that stands out to us is the world’s fifth-most populous — Pakistan.

For the record: Federal Reserve chair Jerome Powell is shedding his illusions that he can tamp down inflation without wrecking the economy.

Well, up to a point. Interviewed by NPR last Thursday, Powell was asked about the Fed’s ability to pull off a so-called soft landing.

“The question whether we can execute a soft landing or not — it may actually depend on factors that we don’t control,” he replied. “There are huge events, geopolitical events going on around the world, that are going to play a very important role in the economy in the next year or so.”

A very Pontius Pilate-y answer, no? Powell is washing his hands of the Fed’s ceaseless money printing last year, resulting in inflation that he blew off as “transitory” for over six months.

NPR journalists might have forgotten all that, but we have not…

That said, the day’s economic numbers are all good.

Retail sales jumped 0.9% in April, a bit more than expected. If you factor out auto sales (volatile month to month) and gasoline sales (rising or falling prices can skew the overall figure)… the jump was 1.0%, much better than expected.

But inflation can distort a number like this. For a better picture of “the economy,” there’s industrial production. Here, April registered a 1.1% jump — and much of that was driven by manufacturing. Fully 79.0% of America’s industrial capacity was in use last month — the most since late 2018.

The FDA is easing up on some of its nonsensical rules that have contributed to the present shortage of baby formula.

Formula made in European Union countries is typically verboten — not because of any concerns it’s unsafe but because it doesn’t meet the FDA’s exacting labeling standards.

Yesterday, the FDA announced it would temporarily ease enforcement of the labeling rules for the next six months.

Reason writer Elizabeth Nolan Brown is trying to see a bright side: “During the height of the COVID-19 pandemic, officials eased rules regarding everything from telemedicine to take-out sales of alcoholic beverages, showing that many of these rules weren’t necessary in the first place. Perhaps one silver lining of the current formula crisis is that it will do the same thing for excessive regulation of baby formula.”

Yeah, we’re not holding our breath…

Problems we hadn’t started thinking about yet: “South African Copper Thieves Are Screwing up the Future of Electric Vehicles,” says a headline at Fortune.

As you might know, South Africa is home to the bulk of global platinum reserves — as much as 80% by one count.

“For years,” says the article, “mining companies in South Africa have been at war with increasingly well-organized crime syndicates that target the country’s lucrative mining industry.”

But they’re not going after the platinum: Often as not, they’re going after the copper infrastructure in the mine — cables, electrical wiring and whatnot. Copper prices have more or less tripled since 2015.

“Looters often spend days at a time underground, bringing with them food and water rations, and in operational mines, illegal miners have even been known to set booby traps or ambushes for mining staff or even rival gangs.”

Still, the quest for copper has the potential to disrupt platinum production. “Platinum’s ability to withstand high temperatures makes it an ideal material for the manufacturing of fuel cells, an alternative to battery-powered electric cars that promises to play a crucial role in the transition toward emission-free vehicles.”

And no one else can pick up the slack. The No. 2 global producer of platinum, you wonder? Russia.

“I have been reading and contemplating how student loan forgiveness could be best addressed if it takes place,” a reader writes.

“I believe the fairest way to fund the loan forgiveness program is to assess the costs to the colleges and foundations that reaped the most money from the student loan program.

“Enjoy your perspectives and viewpoints… always provides me with something to contemplate.”

The 5: Yes, and we’ve said as much recently. No way should taxpayers get soaked for this.