We interrupt this impending bear market for another timely warning about famine. 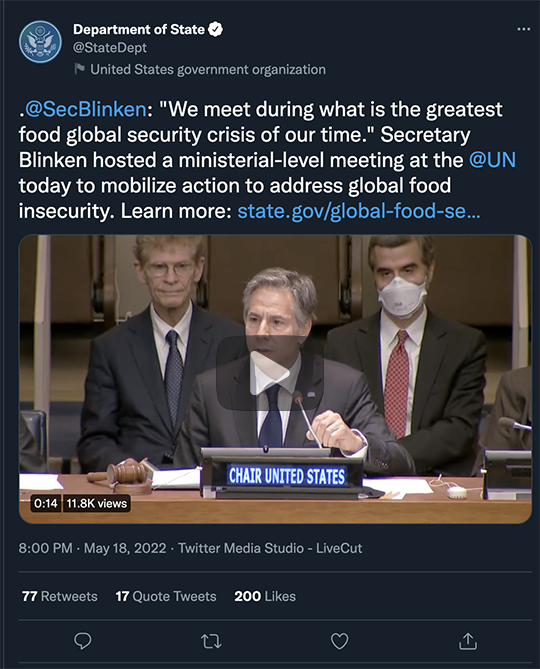 “Planting has been far below normal in 2022,” says our macro authority Jim Rickards of the Northern Hemisphere. Bonus? The war in Ukraine.

“Russia and Ukraine together account for 29% of global wheat and 19% of global corn exports,” he says, while zooming in on the word export. “The U.S., Australia, Canada and others grow a lot of wheat, but… they export relatively little.”

Meanwhile: “Many countries get 70–100% of their grains from either Russia, Ukraine or both,” Jim continues. “Kenya, Sudan, Somalia, many central African countries, Jordan and other Middle Eastern countries [import] much of their grain from Russia or Ukraine.”

“Project ahead to October, November, December this year,” he adds, “those countries I mentioned are not going to be able to get their grain supplies.

“The combined population of countries that get 70–100% of their imports from Russia or Ukraine is 700 million people,” says Jim. “That’s 10% of the global population.

“And what if the war in Ukraine drags on well into next year? Next year’s growing season would also be disrupted, and the shortages could extend into late 2023 and beyond.

“Some might argue that other nations could pick up the slack and grow additional grain,” says Jim. “That’s nice in theory, but it’s not that simple…

“Russia is the largest exporter of fertilizer, and sanctions are cutting off supplies,” he notes. “Many farmers cannot get fertilizer at all, and those who can are paying double and triple last year’s price.”

That means that crops produced will have much higher prices because of high-priced inputs — including fertilizer — plus, higher transportation costs due to high diesel and gasoline prices.

“Beyond the humanitarian aspect of food shortages,” Jim says, “there are also potentially serious social and geopolitical ramifications.

“Remember, the ‘Arab Spring’ started in 2010… in Tunisia and spread from there,” he says. “It was triggered by a food crisis: A shortage of wheat triggered the protests.

“Now many poor countries in the Middle East and Africa are facing a much greater crisis… Will we see even more social unrest than in 2011?” Even outdoing the instability of the Arab Spring, in fact?

“We could also see waves of mass migration from Africa and the Middle East as desperate and hungry people flee their homelands,” Jim says, affecting mainly Europe.

“The United States could also witness another wave of migration at the southern border,” he says. “A global food crisis could send the numbers spiraling to uncontrollable limits.

“In short,” Jim concludes, “we know enough now to predict much higher prices, empty shelves and — in some cases — mass starvation in the fourth quarter of this year.

“We’re looking at a humanitarian crisis of unprecedented proportions, probably the worst since the Black Death of the 14th century — even if most people can’t see it coming or fully fathom the depths of the coming crisis.

“I don’t believe many people grasp the enormity of the food crisis we’ll be facing in the months ahead,” Jim adds, “but the world could be on the verge of a [global] humanitarian crisis.”

[Wow. I’m depressing myself… But what’s the saying about “being forewarned”? To that end, take a closer look at our “Lost” Inflation Survival Manual, Rediscovered. It’s replete with step-by-step instructions to help you and your loved ones weather the events Jim’s forecasting.]

Here for some timely advice, our options-trading ace Alan Knuckman says: “Focus on percentages, not points.”. Indeed, it really puts things in perspective: “The Dow move of 1,000 points is just 3%. And even though stocks are constantly failing to hold any gains, the fear factor, the VIX, is… actually off its January top.

“The 10-year yield” — at 2.8% today — “which everybody was so concerned about when it moved back above 3%, is not moving higher; it’s actually off the top from 10 days ago and is off… that peak level,” Alan says. “Just saying.”

“Portugal’s central bank has opened up its heavily guarded vaults,” says the Reuters wire, “giving a rare glimpse of where some of the country’s gold reserves are kept.”

The 720,000-square-foot vault, located in a bedroom community outside Lisbon, holds 382.6 tonnes of gold bullion or roughly 45% of Portugal’s gold reserves. With the remainder stored on Threadneedle Street, London. 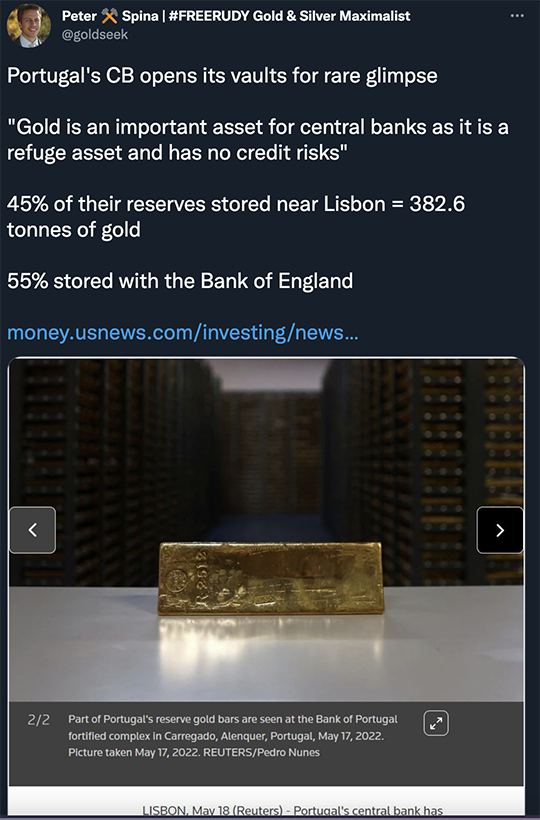 According to information provided by Bank of Portugal board member Helder Rosalino, “since 1999, when the euro currency was officially created, the value of Portuguese gold reserves has increased by 16.8 billion euros. It rose 4.3% to around 19.8 billion euros last year alone.”

“With [gold] representing the equivalent of nearly 10% of the country’s gross domestic product,” the article concludes, “Portugal has the world’s 14th-largest gold reserve.”

We’ll draw another conclusion: Portugal is more transparent when it comes to its gold reserves than is the U.S… Something former U.S. Congressman Ron Paul pounded the table for — a transparent gold audit — at least since the mid-aughts.

Then there was the Gold Reserve Transparency Act introduced in the House on May 25, 2021, by Rep. Alex Mooney (R-WV). The bill’s shorthand? “To provide for the first true audit of gold owned by the United States in more than 65 years, and subsequent audits every 5 years.”

Seems reasonable enough… But the bill languished in the House.

Of course, there was the time on Aug. 21, 2017, when former Treasury Secretary Steve Mnuchin, his wife and Sen. Mitch McConnell took a tour of Fort Knox… to check on the gold and experience the solar eclipse together. 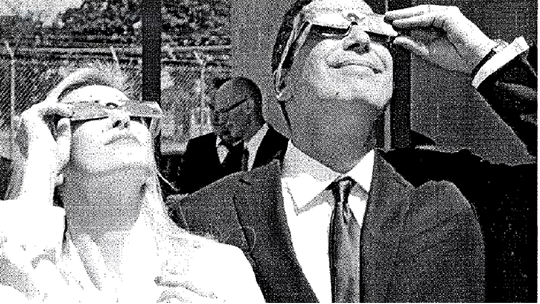 Credit: U.S. Department of the Treasury

“Glad gold is safe!” Mnuchin tweeted. (And we’ll have to take his word for it.)

Mnuchin’s visit was noteworthy for another reason: it marked the first occasion civilians had been inside the vault since 1974 when a congressional delegation and a few journalists toured the repository.

One final thought on the subject, and then we’ll move on. The day Mnuchin had a one-on-one with U.S. gold reserves in 2017, The 5’s issue was appropriately titled “Gold Will Not Be Eclipsed!”

But here’s the eerie part. Dave pointed out at the time: “The Russian Central Bank keeps accumulating ‘sanctions insurance’ in the form of gold.”

And so the story goes…

“While the broad market experiences its fair share of turmoil, there’s a painful reversal happening in tech startup investing that is undoing the fortunes of many founders and investors,” says our science-and-technology maven Ray Blanco.

“Startups with stratospherically high valuations have gotten a swift reality check… [They] have been rife with layoffs, suspicious investors, a departure of funds and valuation trimming.

“As a result, many venture capital firms have seen their startup-heavy portfolios decline,” says Ray. One example: “SoftBank” — called “the world’s most important tech-investing group” by The Economist — “reported a $26.2 billion loss on its big portfolio of technology companies for the first three months of the year.

“The pain doesn’t stop there… According to the financial data company PitchBook, venture capital investments fell 26% in this year’s first three months from Q4 2021.”

Ray adds: “The more I read, the more I see comparisons made to the dot-com crash two decades ago. But I don’t think that’s what we’re seeing here…

“Sure, venture capital firms and individual investors were throwing money at tech names left and right — some that didn’t even have much to do with technology but were labeled as such anyway.

“When you throw unlimited money at companies that are just getting on their feet?” Startups feel the pressure to grow at an unsustainable pace. “When that happens, it’s not uncommon to see the quality of work deteriorate.” On top of which, “acquisitions weren’t thought through, distracted leadership burned too much cash… the list goes on.

“I know this sounds pretty negative, but there’s a silver lining,” says Ray. “Not every startup will survive, but the startups that do survive will do so by no mistake.

“Some of these troubled tech startups can alleviate a lot of issues by simply reigning in frivolous spending. More thoughtful hiring and acquisition can go a long way too,” Ray notes. “With less money to play with, leadership will have to make the most of their limited dollars.

Once again on the topic of student loan forgiveness, a reader writes: “Let’s not forget about the ginormous, multibillion-dollar ‘endowments’ many ‘elite’ – i.e., expensive — colleges and universities are sitting on. Not to mention their tax-exempt status.

“Harvard’s endowment last year soared to $53 billion! Over 80 private institutions have endowments of $1 billion or more.

“Why not force these universities to apply funds to students’ tuition and fees — or else they lose their tax-exempt status? Wasn’t Congress threatening this back in 2016?

“Most if not all students could go to college for free without the need for student loans by eliminating bloated fees and useless administrators. And taxpayers, some who didn’t even go to college, wouldn’t have to bail anyone out.”

The 5: Near as we can tell, the last time Congress seriously scrutinized university endowments was in February 2016 when Sen. Orrin Hatch, Rep. Kevin Brady and Rep. Peter Roskam — all Republicans — sent an inquiry to 56 private colleges with endowments exceeding $1 billion.

Congressional hearings ensued. Yada, yada… But nothing really came of it.

Until the TCJA of 2017 which “includes a provision that places a 1.4% tax rate on investment income for universities with endowments whose value rises to $500,000 per student,” according to Yale Daily News. [Emphasis ours.]

“Yale, along with Princeton, Harvard and the University of Pennsylvania, has spent the past two years quietly lobbying members of Congress to pass a separate bill, HR 4438, that would repeal this tax.”

We can’t help noticing that one adverb: quietly…

“Emily, why are you giving kudos to someone having their student loan forgiven?” writes a disgruntled reader.

On the main, I oppose a student loan debt jubilee — after all, I paid off my own meager college debt — but it sounds as if the young lawyer in question held up his end of the PSLF bargain. About time the federal government did the same.

You all take care this weekend… We’ll be back Monday.