“Could you share some suggestions for people who are stuck with margin loans?” a reader asked our income-and-retirement expert Zach Scheidt.

“This question caught my attention,” says Zach. “Margin loans can be particularly risky during bear markets.” So Zach warns: “If you’re not careful, it’s possible to lose more money than you started with.

“That said, margin can be a helpful tool under the right circumstances. And like any powerful tool, it’s important to know how to use it appropriately.

“A margin loan is a financial tool that most brokerages offer,” says Zach. “With it, you can borrow cash from your broker to buy shares of stock.

“A broker will typically allow you to borrow up to 100% of the value of your account,” he says. “So if you deposited $100,000 into a brokerage account, you could then borrow and buy up to $200,000 worth of stock. (Some brokerages, however, allow you to borrow much more.)

But in most cases, your loan is secured by the value of stocks that you hold in your account.

“When stocks trade higher, a margin loan can be a great tool,” Zach notes. “You can buy more shares and lock in bigger gains as your investments add up. That’s exciting!

“However, during bear markets, a margin loan can cause some big headaches…

“Buying shares on borrowed funds can magnify your losses, which add up quickly,” says Zach.

“If you lose too much with a margin loan, your brokerage may even ask you to add more cash to your account,” Zach says.

“This is called a margin call.” And here’s one such predicament aired on Twitter…

“If you don’t comply, the brokerage may sell your shares to make sure you keep enough money to pay back the loan.”

In order to avoid this scenario…

Zach advises: “Investing in high-quality stocks, having extra cash handy and using other strategies to generate income all contribute to using margin wisely.

“But it’s important to remember that using margin still adds risk to your account — especially in a bear market,” he reemphasizes. “And it’s especially important to consider how much risk you can handle.

“If you’ve been using margin and you find yourself uncomfortable with the amount of risk — or the size of the swings — in your account,” Zach says, “it’s probably time to set a plan for reducing your exposure.

“In other words, selling some of your shares and paying off some (or all) of your margin loan,” he says. “But I wouldn’t do it all at once…

“Start by deciding how much you want to sell,” Zach suggests. “Then set a time frame for when you want to be settled.”

Perhaps two or three months? “Finally, spread your sell orders over this period so that you slowly reduce your risk,” he says. “Sell a little bit this week, a bit more next week and so on…

“That way if the market spikes higher over the next few days, you won’t kick yourself for getting out too early,” Zach says.

“But if the market heads lower, you’ll have already started selling some of your positions so that the losses won’t be quite as bad.

“And you’ll feel better knowing you have a solid plan for managing your risk in this turbulent environment,” Zach concludes. “This isn’t individual investment advice, but it does give you some good concepts to better manage your risk in today’s market.”

To the market, where the S&P 500 is narrowly avoiding a bear market… Still, it’s mere points away from a 20% dip, which — at the start of 2019 — prompted Fed chair Jay Powell to back off a round of monetary tightening. (Won’t happen this time, by the way.)

For some major economic numbers today…

“Despite supply chain disruptions, it’s turning out to be a banner year for renewable energy production,” says our science-and-technology expert Ray Blanco.

“According to the U.S. Energy Information Administration (EIA), the United States is expected to install more than 46.1 gigawatts of new utility-scale electric-generating capacity of all kinds,” he says.

“To put that in perspective, that’s 15% more energy than New York state generates during the summer.

“More than half of that newly installed electrical capacity is expected to come from renewable energy sources like solar and wind. In fact, 63% of new electric capacity will be coming from these two renewable resources.

“New energy projects take years to plan and build, so this year’s additions reflect decisions made years ago,” Ray notes.

“With last November’s trillion-dollar infrastructure bill, $65 billion was earmarked to transition the U.S. power grid toward energy sources that don’t emit carbon dioxide at the point of electricity generation, which largely means we’ll be building a lot of solar and wind facilities over the coming few years.

“Of course, though renewables are touted due to their low greenhouse gas emissions, they are far from perfect energy sources. Neither solar nor wind is dispatchable, meaning they can’t be turned on when needed like a traditional electrical plan can,” Ray says.

“Technology above and beyond is required to make wind and solar truly practical energy resources for our power grid,” Ray adds.

“This can mean having dispatchable backup energy production on hand for when renewable electricity output is low or demand exceeds it,” he says.

“However, it can also mean storing electricity during periods of high renewable production in order to hold it for times when it’s needed.

“The most common way to do this is by using huge, grid-scale batteries,” Ray closes. “Lithium-ion batteries — already common in consumer electronics — are one viable battery technology.”

Needless to say, this type of battery storage is only viable assuming there’s an adequate global lithium supply.

We’ll call this a First Amendment triumph: Homeland Security’s new Disinformation Governance Board has been put on ice. For the time being.

In addition, the czarina of disinformation, 33-year-old Nina Jankowicz, resigned as head of the board after just three weeks. 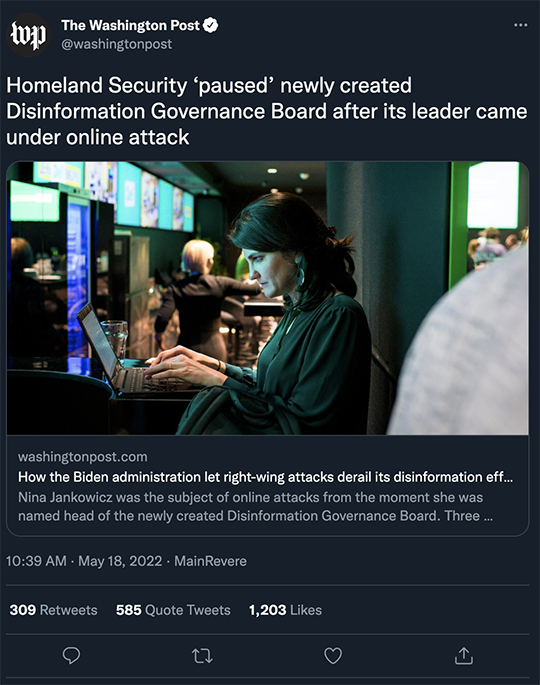 Apparently, Ms. Jankowicz became the target of online bullying and harassment — with most media outlets pointing a finger at the “far right” — though officially her resignation letter says she’s expecting a baby (Mazel!) and wants to make “spending time with family… first priority.”

Listen, we won’t attack Ms. Jankowicz; she got an offer nary a millennial could refuse: a high-powered job with stable pay and sweet-ass benefits. That said, she made some truly perplexing choices on social media… one of the very media she was supposed to curb.

Regardless, DHS harrumphs, the board was “grossly and intentionally mischaracterized: it was never about censorship or policing speech in any manner.” It wouldn’t even have “operational capability”! Whatever that means.

But Homeland Security’s bald intentions were hiding in plain sight…

Disinformation? Some words good, some words bad — we’ll decide for you, peon. Governance: “the act or process of governing or overseeing the control and direction of something,” according to Merriam-Webster.

Call us crazy, but controlling the direction of words and thoughts sounds an awful lot like censorship and speech policing, no?

All told, the entire short-lived enterprise was like a LARP (live-action role-playing game), a sort of trial balloon to gauge Americans’ reactions. We’ll see if the Disinformation Governance Board becomes a footnote in history… or gets resurrected.

And for another free-speech victory…

This after the N.C. regulator deemed a Flying Dog beer label to be “inappropriate” and in “bad taste”… 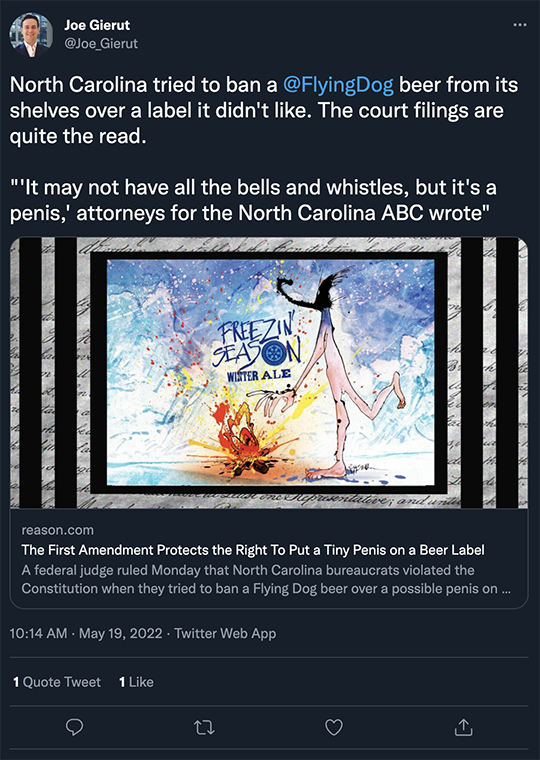 Although the commission relented — allowing Freezin’ Season Winter Ale to be stocked on North Carolina shelves — that wasn’t good enough for Flying Dog’s CEO Jim Caruso… who once sued Michigan regulators in 2009 over censorship of its “Raging Bitch” IPA label. (Flying Dog won in the U.S. Court of Appeals in 2015.)

Says Mr. Caruso: “The First Amendment is the last defense against authoritarian and arbitrary government and it must be protected against any and all threats.”

Who knew a First Amendment, beer-label crusader was just what we needed in 2022?

Finally today, a longtime reader says: “My son received an email out of the blue last week informing him that his remaining law school loans had been forgiven under PSLF.

“He’s been working as a federal defender for about seven years and had been faithfully paying on his loans for more than 15 years. As far as I know, he did not apply; it just happened.”

Whaddya know… And kudos to your son. He’s probably standing a little taller without grad-school debt weighing him down.