We begin the new week with a handful of random observations — as much social and cultural in nature as financial.

First, if you missed it… social media abound with reminders that “monkeypox” is pronounced with a silent “k.” Heh…

Second, the world improvers, empire builders and do-gooders are at it again — meeting in Davos, Switzerland, for the first in-person session of the World Economic Forum since pre-COVID times. Busy little beavers they are… 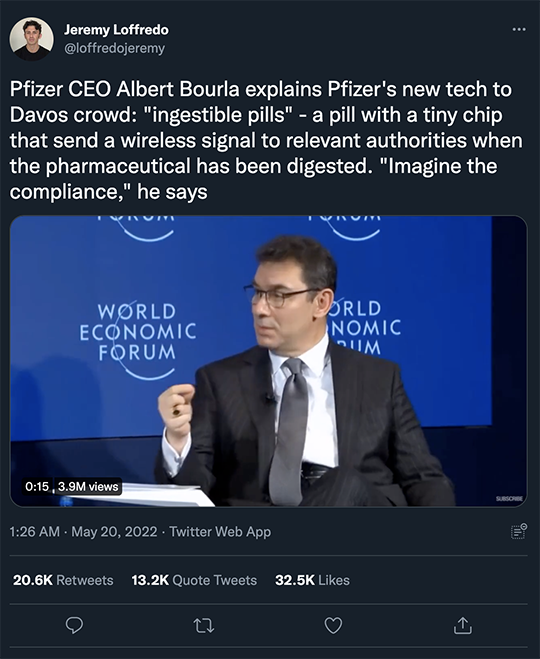 And last… what’s with this peanut butter recall? Over the weekend, news broke that certain lot numbers of Jif are contaminated with salmonella. “If consumers have products matching the above description in their possession, they should dispose of it immediately,” says a recall notice from Jif maker J.M. Smucker (SJM). 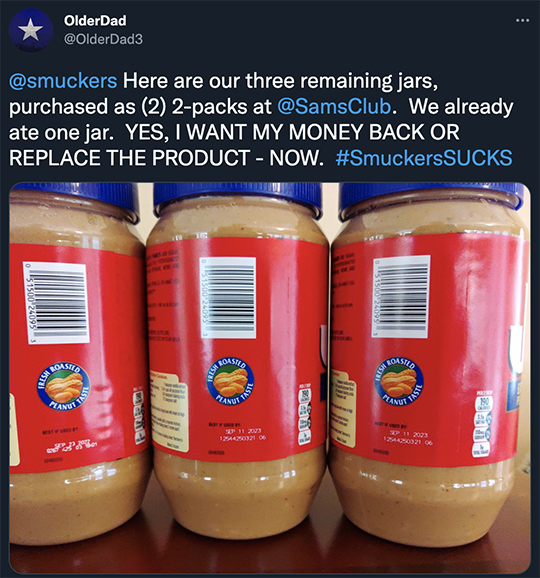 “Tickerguy” Karl Denninger is trying to make #SmuckersSUCKS a thing on Twitter — alas, with no luck so far. SJM shares are down a mere 1.4% as we write. 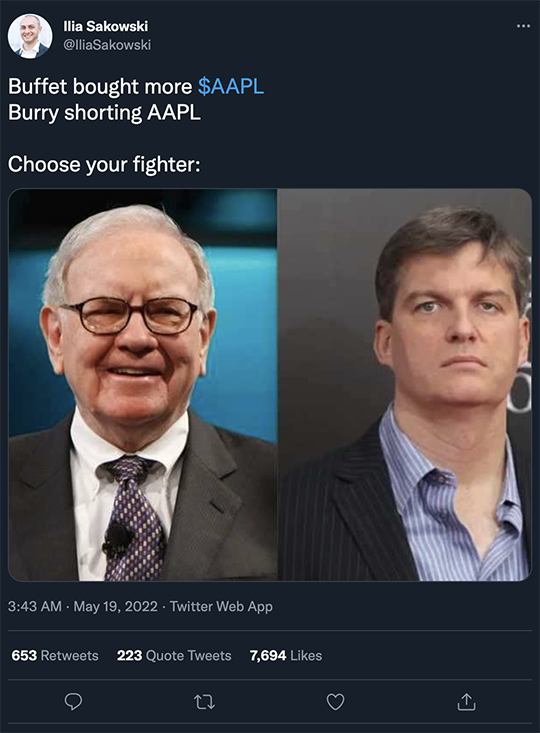 And indeed, Michael Burry of Big Short fame has made a large bet against Apple — put options against 206,000 Apple shares as of March 31, per a recent disclosure. For the record, AAPL shares are already in bear-market territory, down 22.5% from their early-January peak.

Our macro maven Jim Rickards is siding with Burry: “Apple is being hit with a quadruple whammy that will cause its stock price to decline materially.”

Let’s examine the four hits AAPL is set to take, one by one…

No. 1: The global shortage of semiconductors. “Apple has done a good job of sourcing large volumes of cutting-edge semiconductors to operate its products,” Jim allows, “but even the best connected firms are feeling the pinch of supply chain shortages.

“This situation promises to get worse as certain semiconductor manufacturing inputs including strategic metals and processed neon gas to power etching lasers become unavailable due to sanctions imposed on Russia, which is the source for those inputs.”

No. 2: Falling consumer demand in the United States and other developed nations. “This is largely due to inflation. If consumers have to spend $75.00 instead of $40.00 several times per week to fill up their SUVs and pickup trucks it means that much less cash available for discretionary purchases such as Apple computers and iPhones.”

No. 3 is, umm, interesting: Had you heard about the Apple riot in Shanghai?

It happened back on May 5. Only the New York Post gave it much play stateside, citing social media videos: “Factory workers at a Shanghai facility that makes Apple products rioted on Thursday, clashing with guards in hazmat suits and jumping across security barriers in an apparent mutiny against strict coronavirus restrictions.”

Seems the factory is one of many still functioning under lockdown, but with a “closed loop” system in which workers are — there’s no other word for it — captives. They can’t leave at the end of their shift, can’t see family and must bunk down on-site.

The last straw appears to have come when the Post says “employees had been suddenly banned from returning to their dormitory area during off-duty hours due to coronavirus restrictions.”

Jim’s take: “In effect, the COVID insanity of the Chinese government has merged with disrupted supply chains and disgruntled workers into a potent brew of anger, frustration and stopped production.

“At this point, Apple probably wishes that they had relocated from China earlier,” Jim wrote last week to his Rickards’ Strategic Intelligence subscribers. “No doubt, they are planning to do so now.”

From Jim’s lips to the mainstream’s ears… 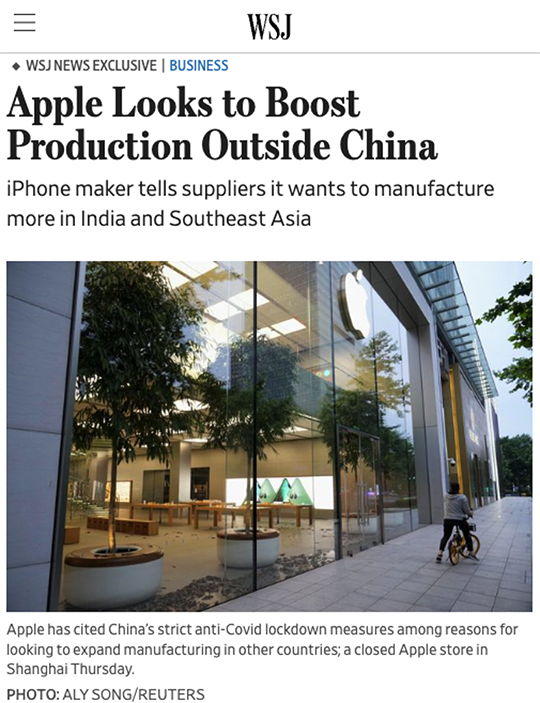 “Apple Inc. has told some of its contract manufacturers that it wants to boost production outside China, citing Beijing’s strict anti-COVID policy among other reasons,” according to a front-page scoop in this morning’s Wall Street Journal.

At present, more than 90% of Apple products are assembled in China by contractors. India and Vietnam are likely candidates as AAPL looks to diversify. But that doesn’t happen with a snap of the fingers…

Finally, No. 4: The breakdown in global supply chains beyond semiconductors and Shanghai.

“Transportation lanes are a critical component of any supply chain and the logjam of vessels stretches from Long Beach to Ningbo at this point,” says Jim. “Even if goods make it to LA, there are few truck drivers to move them out of the port storage areas.

“All of the transportation runs on diesel and higher costs for the fuel are simply added to the cost of goods, making them more unaffordable for stretched consumers. This situation is bad and rapidly getting worse.”

Thus, a quadruple whammy. “Even the best managed companies can run into headwinds that are beyond their control. Earnings can suffer accordingly.”

Nor does the stock market pain end with Apple: Jim just issued a “kill list” of 153 stocks he says you should sell right now. You can find all of them as soon as you click here — with Jim’s full explanation of why it’s time to bail.

After a brief dip into bear-market territory before Friday’s close, the S&P 500 is rebounding smartly this morning.

Precious metals are staging a modest rally, gold up to $1,855 and silver at $21.86. Elsewhere in the commodity complex, crude has dipped below $110.

The major cryptos are holding on to round-number support — Bitcoin above $30,000 and Ethereum above $2,000.

The big economic number of the day is a reliable recession indicator — and it’s not flashing red or even yellow yet.

The Chicago Fed National Activity Index crunches 85 economic indicators into a single number. It has an excellent record of calling recessions in real-time for more than 50 years now: Whenever the three-month moving average dips to minus 0.7, recession is nigh.

It will be called the Indo-Pacific Economic Framework — “a sweeping economic initiative designed to counter China’s influence in the region,” Bloomberg explains. Joe Biden rolled it out this morning on his first trip as president to Asia.

If this sounds oddly familiar, that’s what the Trans-Pacific Partnership hatched during Obamatime was supposed to do; here’s what we were saying about this crony-capitalist giveaway a decade ago.

TPP lost its mojo when Donald Trump withdrew America from the agreement. In the meantime, China formed its own organization as a counterweight — the Regional Comprehensive Economic Partnership.

Hmmm… Near as we can tell, 11 countries stand to be members of both the China-organized RCEP and the new anti-China IPEF — Japan, South Korea, Australia, New Zealand, Indonesia, Malaysia, Thailand, Vietnam, the Philippines, Brunei and Singapore.

Talk about hedging your bets between the superpowers, huh?

➢ Also in Asia today, Biden committed the U.S. military to defending Taiwan against any attack by mainland China — yet another reckless provocation against a nuclear-armed power that White House aides are trying to “walk back.” But that’s how it goes in late-stage empires…

“So let me get this straight,” a reader writes as the subject of student loan forgiveness stretches into a new week…

“A man borrows money to get a good education so he can get a good-paying job. He then gets that good-paying job, which would enable him to pay off the loans he got to get the job. After making payments from the income derived from that job, the government then decides he no longer has to pay off his loans.

“Meanwhile, my son (and many other people like him) graduates from college with zero student debt because he paid entirely for his education by working while also attending school. He paid over $45,000 of his own money so as not to have to borrow any money or have any student debt when he graduated. Because he did the responsible thing and went to a school he could afford and paid for it entirely, he gets nothing.

“How is this in any way fair?

“No wonder the Biden administration is pushing so hard for this handout for the rich. So who winds up paying for these elites’ college expenses? The poor working stiffs who never went to college or the ones who went to college and paid their own way such as my son.”

“My impression was that for many graduates who chose less career-oriented majors,” adds another reader, “perhaps the only useful education they would get for their student loan obligations revolved around how to budget and scrimp to pay off their loans and how to read the fine print and be more aware of contract law for the remainder of their lives.

“Instead, we now consider removing those vestiges of useful education, instead telling them that if you choose the selfish, impractical or lazy path you can just cry about it and others will shoulder the burden of their bad decision making.

“And yes, I went to college and I saw a lot of people whose choice of major was focused entirely around either doing what they love or doing what was easiest so they could party more, without consideration for the future or their employability, so I’m speaking from personal direct observation.

“I also paid off my student loans well over $100K in 1980s dollars, because I picked a good major and worked hard. I worked part-time jobs during school, worked summers and generally was studying or working on weekends and during spring break, etc.

“Think of what a generation of graduates could do to our country as they assimilate into the workforce, and likely in many cases into government, if the culmination of their education was that they can make huge mistakes without regard for the future or consequences, and magically all will be forgiven.”

The 5: Apparently we can’t say it too often, because it’s not sinking in: As long as you direct your ire at the proverbial gender-studies major carrying a $150K debt load and pulling lattes at Starbucks… you’re not going to affect any meaningful change.

They’re not the problem. The system is.

It’s a corrupt cartel that’s grown like Topsy over at least three decades, replete with administrative bloat and Disney-like campus complexes made possible only by the federally guaranteed student loan program and loans that aren’t dischargeable in bankruptcy (thanks in large part to a law Joe Biden shepherded through the Senate in 2005).

Scoff all you want at the gender-studies major; at least she’s producing something of value by preparing beverages for caffeine-deprived customers. Meanwhile, the vice chancellor living in a gated community is positively parasitical — producing nothing of value for anyone.

But as long as you obsess about the former and ignore the latter, higher education will remain a poster child for the phenomenon George Carlin described in 1992: “They try to divide the rest of the people; they keep the lower and the middle classes fighting with each other so that they, the rich, can run off with all the ****ing money.