“The idea that I should trust my eyes more than the stats, I don’t buy that… I’ve seen magicians pull rabbits out of hats and I know that the rabbit’s not in there,” said baseball icon Billy Beane — of Moneyball fame — who was the Oakland Athletics’ general manager from 1997–2016.

Beane is best known for his statistics-based philosophy that brought the A’s all the way to the ALCS Championship Series in 2006. 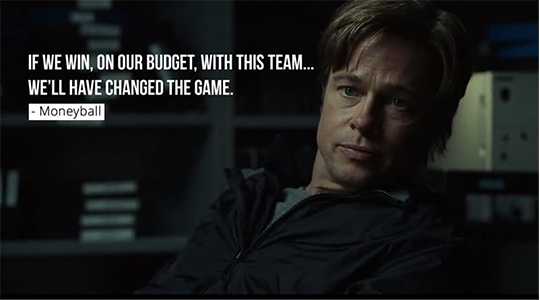 In a completely different space, economist Andrew Zatlin earned his MBA from the Haas School of Business at UC Berkeley and was a research fellow at Kyoto University Economic Research Institute. But more recently, Mr. Zatlin adopted Beane’s pragmatic approach — founding a business he calls “Moneyball Economics” — with a focus on consumer trends.

“My best ideas are based on the data coming from the jobs market,” says Mr. Zatlin in an interview with our founding editor Addison Wiggin at The Wiggin Sessions where he tackles big questions about the market, inflation… and how to make smart decisions with your money.

“It’s no secret that food prices are skyrocketing,” Andrew notes. “In fact, they’re downright out of control.

“A shortage of crops” — and fertilizer — “has led to massive food inflation,” he adds. “This is a global problem. In fact, here’s a chart with the world’s top 10 wheat-producing countries. Look how many are in turmoil right now,” including their production cuts… 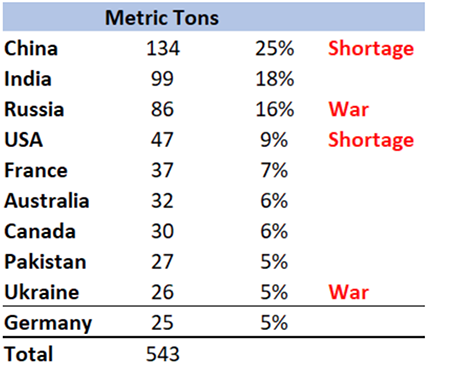 “But consumers still have to put food on the table!

“When food prices soar, consumers shift their spending,” says Andrew. “From an investment perspective, this creates winners and losers.

“It was the same situation during the Great Recession of 2008–2009. What we saw then was that two sectors became winners. In other words, two sectors grew (while the rest of the market crashed): discount retailers and discount food providers.

“Makes sense, right? Consumers don’t have as much money to spend. So they’re looking to stretch their dollars,” he notes. “That’s why Whole Foods, a higher-end supermarket, ran into trouble in 2008. But Kroger (NYSE: KR), which is a budget-friendly chain, did just fine.

“We can expect the same thing in the wake of Farmageddon,” says Andrew. “Consumers will be ditching expensive brand names and reaching for affordable private labels.

“In fact, this shift is already underway. And companies are acting accordingly,” Andrew says. “Based on my proprietary data, they’re hiring! 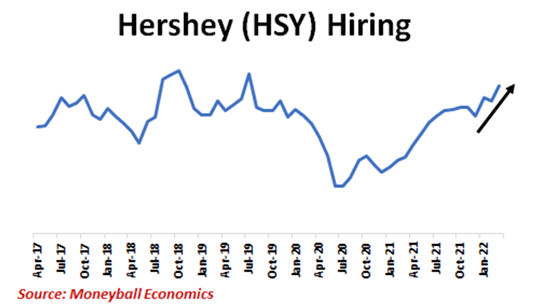 “Hershey isn’t overly affected by the rising prices of wheat or corn,” he says. “So it’s been able to keep costs down and continue hiring. 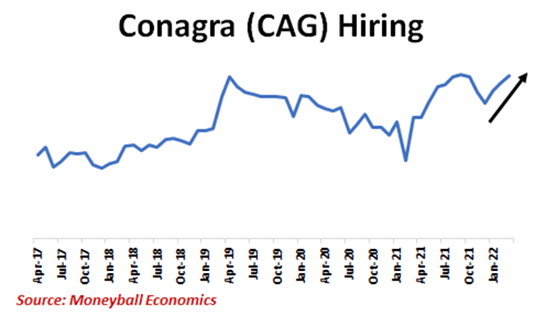 “These are just a [couple] of the expected winners,” says Andrew. “As for the losers — keep in mind that luxury purchases take a backseat when money is tight. 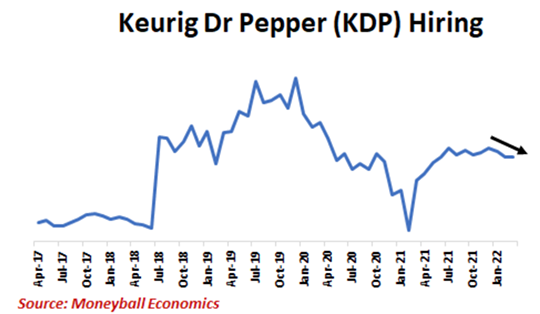 “At the end of the day, consumers speak with their wallets,” Andrew says.

“When it comes to food, they need to stretch their dollars. And that means changing what they buy, and changing where they buy from.

“I just shared a few of the companies I believe will be the winners from this shift,” he says. “What’s your move now?” To wit, Addison just broadcast an episode of The Wiggin Sessions with Andrew Zatlin. View their complete discussion right here.

One economic number of note today, initial jobless claims dropped to 210,000 for the week ending May 21, according to the Department of Labor, smack in the middle of the consensus range.

And the Commerce Department issued its second of three guesses at first-quarter GDP. The “expert consensus” among Wall Street economists was for a 1.3% annualized decline. Actual number? A 1.5% drop. That is, “the economy” shrank more than anticipated, representing, in fact, the worst quarter since Q2 2020. On the other hand, consumer spending ticked up 3.1%, beating economists’ 2.7% estimate.

Then there’s this clown: World Bank president David Malpass who is finally saying out loud what everyone already knew.

“As we look at the global GDP… it’s hard right now to see how we avoid a recession,” Malpass said yesterday. “The idea of energy prices doubling is enough to trigger a recession by itself.”

All of which is in direct contradiction to what he said two months ago when Reuters telegraphed Malpass’ thoughts: “Based on current assessments, he does not anticipate the crisis ending the global recovery and reducing global GDP.” Prompting our headline: “When THIS Guy Says ‘Don’t Panic’…”Yeah.

After idling while inflation soared to 40-year highs, the U.S. Senate — in an 80-19 decision — approved Federal Reserve Chair Jerome “It’s Transitory” Powell for a second term as chairman earlier this month.

In other Fed news, disgraced Dallas Fed president Robert Kaplan has been replaced. After showy deliberation, including asking the public’s opinion during a January town hall-style meeting, the search committee approved Lorie Logan, former head of the trading desks at the New York Fed. (Powell provided an effusive recommendation, by the way.)

“Lorie Logan has worked at the New York Fed since graduating college in 1999,” say Russ and Pam Martens at Wall Street On Parade; it’s the singular workplace listed on her online CV. “That means she has been completely ensconced in the culture at the New York Fed for the past 22 years and 11 months.”

Keepin’ it all in the family…

Speaking at the Financial Times’ “Moral Money Summit” last week, Stuart Kirk “accused central bankers and policymakers of overstating the financial risks of climate change in an attempt to ‘out-hyperbole the next guy,’” the FT reports. 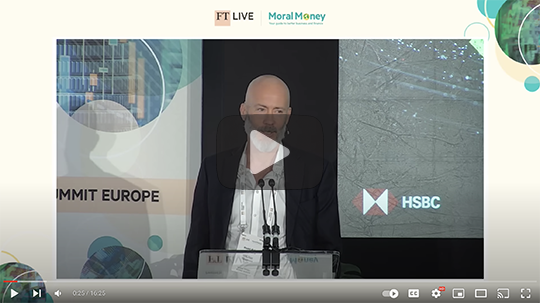 Not handling the truth well, HSBC’s CEO Noel Quinn spent the weekend distancing himself from Kirk. “I do not agree — at all — with the remarks made,” Quinn said. “I am determined that our team won’t be distracted by last week’s comments.”

While Nuno Matos, head of HSBC’s wealth and personal banking business, brown-nosed: “In complete agreement with Noel Quinn — the transition to net zero is of upmost [sic] importance to us and we will strive for ways to help our clients on this journey.”

Huh. We weren’t aware bankers played a major role in conservationism. Our mistake.

The really galling thing? Mr. Kirk’s topic — Why Investors Need Not Worry About Climate Risk — was approved and published two months before the conference. By HSBC execs.

According to the company’s website: “Employing our patented, silicon nanowire anode, Amprius Technologies provides up to 100% improvement compared to standard lithium-ion batteries.”

“And recently,” Ray continues, “company officials announced that Amprius was able to reach a deal with a special purpose acquisition company (SPAC) — transportation-focused Kensington Capital Acquisition Corp. IV — which puts the company’s value at about $1.3 billion.”

Ray notes: “Amprius is unique from other startups because it’s already been selling products commercially for about four years now.

“And their batteries are no joke: rated strong enough to power aircraft,” he says, something other battery makers can’t even approach. “If the electrification of everything moves forward, aircraft will need to be included in the conversation too,” he adds.

“I’ll be looking forward to seeing how this merger unfolds,” he says, “and bringing you any exciting updates.”

More on “the topic that just won’t die,” a reader says: “Many years ago, the concept was floated that colleges themselves should be financing student loans (no government, no banks).

“The transition could be financed by reducing cash federal payments and replacing them with outstanding loan liabilities from that school’s alumni. The school could set up a ‘financial assistance endowment’ and fund it through alumni donations (they are always asking them for money for some project/cause anyway).”

The 5: Holding colleges and universities responsible for students’ post-college career performance sounds sketchy enough. But after consumers have shelled out full tuition for crappy Zoom classes the last two years, more students — and their fed-up parents — are questioning this value proposition: the unseemly expense of college versus the likelihood of a good-paying career.

Perhaps that’s why this topic just won’t die… We’ll be back with more tomorrow; until then, take care!