We introduced you yesterday to Mr. Zatlin and his research venture called Moneyball Economics —a nod to the data-driven approach the Oakland A’s used to build a roster in 2006. Despite a meager budget for payroll, the team reached the American League Championship Series.

The data Andrew uses as the basis for his investment recommendations has nothing to do with the usual data that makes daily headlines.

Which, as it happens, brings us to the big story on Bloomberg’s homepage as we write this morning…

Note the use of the word “after” in this headline, a common practice in financial media. It implies cause-and-effect where often none exists. In fact, this morning’s consumer-sentiment data from the University of Michigan came in below expectations —the weakest reading since the summer of 2011.

Don’t read too much into that, though: In a recent interview, Mr. Zatlin tells our founding editor Addison Wiggin it’s a meaningless data point: “Literally, the University of Michigan picks up the phone and calls —hold on —400 people.

“They ask 400 people, what do you think is going on? I mean, come on. Four hundred people? I’m looking at millions of people every month.”

And yet scads of Wall Street analysts study the University of Michigan figures with the same intensity of a witch doctor examining entrails —and go from there to issue forecasts.

In contrast, “my secret sauce is data that nobody else has access to,” says Andrew.

As we explained yesterday, he relies on company-level hiring data to make uncannily accurate investment recommendations.

He was able to develop this “Moneyball” methodology specifically because he’s not a creature of Wall Street; instead his background is in corporate America.

“Coming out of the corporate world, I knew how companies operate. I knew the information that they were looking at, that a CEO and a CFO were looking at. Then what the response time would be for them as this information changed and where you could go to look at that.”

And he’s able to reproduce these results time and time again.

Case in point —and this is spooky: Mr. Zatlin’s hiring data pointed to a boom in defense stocks before Russia invaded Ukraine on Feb. 24.

“Prior to that, hiring suddenly bumped up at Lockheed, Raytheon and Northrop Grumman and suddenly started to accelerate. I got to March: Obviously we all knew, wait a second, once that war was launched weaponry might be on the table, but there was no commitment yet from the U.S. But as March advanced, these were the companies where I saw hiring just go parabolic.”

Pre-invasion, Andrew was especially intrigued by the figures from Northrop Grumman. Post-invasion, NOC’s share price zoomed from $390 to $490 in the space of a few days.

Hiring data allows Mr. Zatlin’s readers to run with the big dogs —that is, hedge funds and other big-money investment managers.

As you might already know, such institutions have to regularly file a form with the feds called a 13F —disclosing their holdings at the end of each quarter.

Key point: The figures don’t become public until six weeks after the quarter is over. So while it was intriguing to learn a few days ago that Big Short legend Michael Burry had a huge short bet against Apple as of March 31… by itself that’s neither timely nor actionable.

But the hiring data is every bit as timely as the insider know-how that hedge funds use to make their most successful plays.

“Sure enough,” says Andrew, “they dumped high tech [in the first quarter] and they got into agriculture and they got into the defense industry. But that’s late —the play’s already made by the time we see it. It’s a confirming signal. It’s like, great. So I’m in sync with the deep-pocket money, but I missed the real opportunity potentially.

“So that’s where my data comes in and says, ‘No, you can basically be in sync. They’re making smart bets because they’re informed. This hiring data can get you to the same place pretty much at the same time.’ And guess what? Isn’t that interesting? They dumped tech. Isn’t that about when Facebook and Netflix [tanked]?”

All of which opens up an especially intriguing opportunity as Wall Street is about to enter its summer doldrums.

Clearly the 100%-plus run-up after the 2020 corona-crash is over. “Now that we are finally at a place where mad money isn’t going to be perpetually just boosting every stock price,” says Andrew, “now that we’re at a place where you can have 20% stock price drops, let’s take advantage of it.

“Everyone seems to think you can only go long on a stock, that you can only be bullish. And the answer’s no. You can be bearish. In fact, the seven biggest trades of all time were bearish trades, where someone came in and said, ‘Absolutely, there’s going to be a housing market collapse and I’m going to bet against the housing market.’”

Next week, Andrew will show you how to take advantage during an event to which 5 Min. Forecast readers are cordially invited. It’s set for next Tuesday at 1:00 p.m. EDT.

Admission is free —but you must register in advance. Click here, and you’re automatically in.

The broad market is once again ripping higher as the week winds down: Wall Street’s losing streak appears set to end at seven consecutive weeks.

The big economic number of the day is “core PCE,” the Federal Reserve’s preferred measure of inflation. At 4.9% year over year, the April number has eased off from March’s 5.2% and February’s 5.3%. Inflation appears to have peaked for the time being, even if it doesn’t feel like it.

Keen grasp of the obvious: “A perfect storm in commodity markets” is approaching, according to mining executive Benedikt Sobotka.

Sobotka runs the privately held copper and cobalt producer ERG, based in Luxembourg. He was speaking this week at the World Economic Forum shindig in Davos, Switzerland.

As a Reuters dispatch sums up his talk, “Years of underinvestment in mining of metals essential to energy transition, supply shocks and high energy prices will continue to drive commodity prices higher.”

There we go again with the energy “transition” from the power elite. But we said as much at the end of our inflation-survival issue last summer.

“If you get small supply disruptions, you are going to see big swings in prices.”

Fed tightening notwithstanding, it’s obvious there’s still way too much funny money floating around out there… 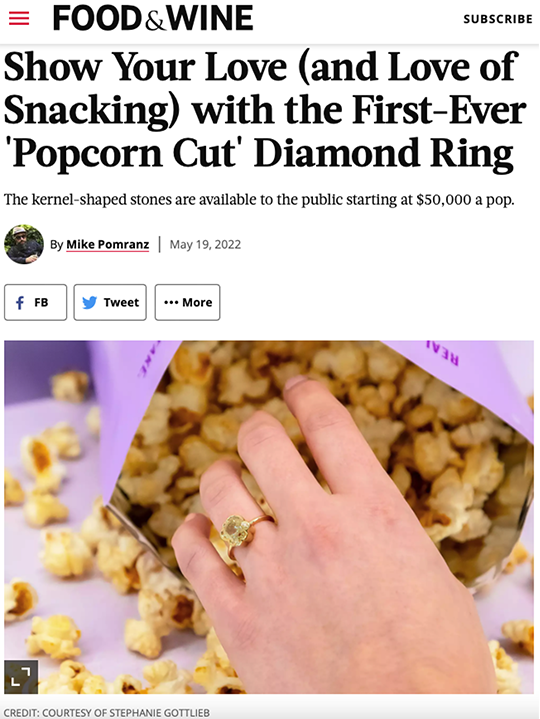 From Food & Wine magazine: “The popcorn specialists at Angie’s Boomchickapop have teamed up with jewelry designer Stephanie Gottlieb to create what the pair is billing as the first-ever ‘popcorn-cut diamond ring’ that is ‘perfect for popping the questions’ and will make for an ‘eye-popping engagement ring.’”

Beyond that, words fail us…

To the mailbag, and a reader who drags us back to the topic of “wartime sacrifice”…

“As always, The 5 is bringing the issues to the fore that need thoughtful consideration rather than knee-jerk response. I am a conspiracy theorist, but every one of my personal predictions has come true over the last decade or two, because conspiracy is the only theory that continually matches reality.

“As for war sacrifices, regular D.C. Freudian slips indicate that both parties believe we are at war already. If we’re going to invoke ‘war powers’ even when we’re not at war, let’s go back to the past and take a look at some full-scale approaches to shortages caused by wars. How about the imposition of the ‘Windfall Profit Tax’ that helped curtail rising gas prices in the 1970s? These could also be re-imposed on energy and expanded to tech and pharmaceuticals at a time of the ongoing ‘emergency.’

“Or let’s revisit the limitations on defense industry profits leading up to World War II, after the (now forgotten) Nye Committee of 1935 exposed vast war profiteering during WWI. Not only were profits severely limited during WWII (along with rationing and price controls on defense), but extremely high taxes on profits were imposed as well — up to and including seizure of 90% of excess profits. Those who were hardest hit during the war were the wealthy, whose share of disposable income dropped from 29% to 16%.

“In effect, the War Production Board of World War II did that by commandeering all resources, building the war plants and controlling production output. FDR insisted that no one would get rich from the war, but they wouldn’t go broke either. While profits were regulated, they were also guaranteed.

“Our reaction to a Slavic civil war that has no stake for the average American seems to me to be yet another proxy war on our part, so let’s really get into the war spirit and give the taxpayer a stake too. In fact, why not nationalize defense entirely, as was proposed in 1939? All defense spending is taxpayer dollars anyway and represents nearly half of the discretionary budget. Forty billion dollars for Ukraine is the equivalent of 80% of the entire annual defense budget for Germany, Japan, the U.K. or France and 65% of Russia’s entire defense budget.

“I would also remind everyone that there was a 10% income tax surcharge during the Vietnam War. And although there were no official price controls during the Vietnam War, the White House continually forced steel companies to roll back price increases due to inflation (helping to nearly destroy the steel industry in the 1980s).

“And maybe, if we’re going to be short of everything ourselves, we could temporarily end all immigration, legal or illegal. And since it now happens that over half the largest economies in the world are corporations, not countries, it makes sense to nationalize all critical infrastructure to keep it out of the hands of multinationals that repeatedly demonstrate an allegiance to the WEF, rather than any country.

“My point is if we’re going to act like a communist country, we need to get the advantages as well.”

The 5: We don’t relish a return of 1970s gas lines —which was what price controls along with the Windfall Profit Tax wrought. Gas might be expensive now, but at least it’s available.

P.P.S. Emily’s back as usual tomorrow with our Saturday wrap-up edition, 5 Things You Need to Know. U.S. markets are closed on Monday for Memorial Day, so the weekday edition of The 5 returns on Tuesday.