“Americans are becoming less supportive of punishing Russia for launching its invasion of Ukraine if it comes at the expense of the U.S. economy,” reports The Associated Press — citing a poll it commissioned.

“While broad support for U.S. sanctions has not faltered, the balance of opinion on prioritizing sanctions over the economy has shifted… Now 45% of U.S. adults say the nation’s bigger priority should be sanctioning Russia as effectively as possible, while slightly more — 51% — say it should be limiting damage to the U.S. economy. In April, those figures were exactly reversed.”

Alas, Washington appears set to double down on sanctions that would further boomerang on you and me.

The Treasury Department plans to end a waiver that allows Russia’s government to pay its debts to U.S. bondholders — the idea being to push Moscow into default even though it has ample resources to meet its obligations.

“While the new rules only apply to people in the U.S.,” reports the BBC, “they will make it difficult for Russia to make payments elsewhere given the role of U.S. banks in the global financial system.”

That’s one possibility. (By the way, the ruble continues to rally against the U.S. dollar. Checking our screens this morning, it’s at a high last seen in April 2018.)

The other boomerang possibility is the one the global monetary mandarins keep blowing off — a default triggering a crisis with one of Russia’s Western creditors, setting off a domino effect throughout the global financial system.

End result, as our Jim Rickards has warned before — “the failure of hedge funds and banks. Takes about a week for bodies to float to the surface.”

Alternatively, Washington might look to sanction foreign buyers of Russian oil — including India and China.

“Secondary sanctions,” they’re called. The White House floated a trial balloon recently in The New York Times — describing a scheme to “punish foreign buyers that do not comply with U.S. restrictions by blocking them from doing business with American companies and those of partner nations.”

There’s already a template here: “The United States imposed secondary sanctions to cut off Iran’s exports in an effort to curtail its nuclear program.”

Which has had the effect of curbing global oil supply and pushing up prices — while utterly failing to deter Tehran from pursuing nuclear energy.

Why does the Biden administration think secondary sanctions aimed at Russia would be any different?

Then again, maybe fossil fuel scarcity is the whole idea: The president all but said so on his trip to Japan.

“Here’s the situation. And when it comes to the gas prices, we’re going through an incredible transition that is taking place that, God willing, when it’s over, we’ll be stronger and the world will be stronger and less reliant on fossil fuels when this is over.” 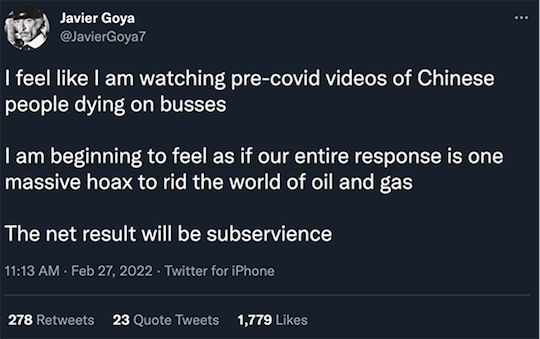 We weren’t sure if it was tinfoil or maybe approaching the target. But after seeing one of the talks at the World Economic Forum gathering in Davos, Switzerland, yesterday… we’re starting to think the latter.

For one thing, one of Norway’s leading bankers also spoke of the transition away from fossil fuels — echoing Joe Biden by saying the “pain” would be “worth it.”

But getting from here to there? Hoo boy… 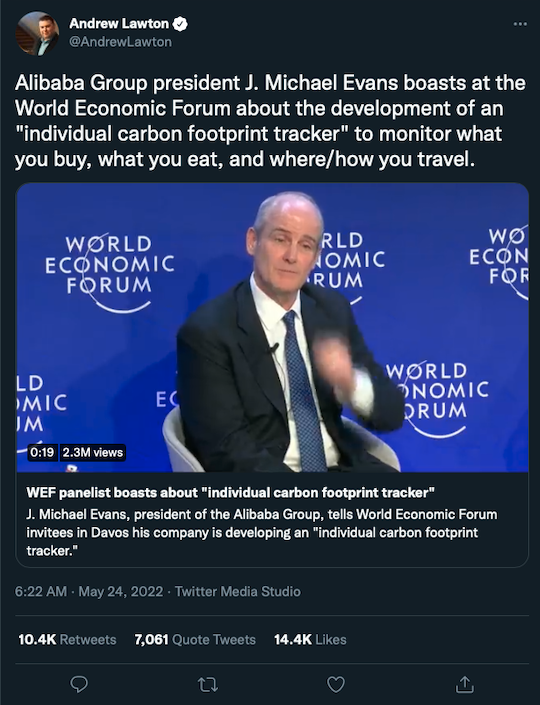 As we’ve said for years, climate change isn’t really about climate or carbon — it’s about control.

Careful about raising too loud an objection, though: Also at Davos this week, Australia’s “eSafety commissioner” called for a “recalibration” of freedom of speech.

All of this as Davos impresario Klaus Schwab seems to be much more visible on the stage this week than he’s been in years past. They’re not even trying to be subtle about it anymore, are they?

As for the markets today… it’s stocks and bonds up, commodities and crypto down.

Precious metals are in retreat, gold back below $1,850 and silver below $22. Crude is down a bit to $109.42 after the Energy Department’s weekly inventory numbers. The major cryptos have broken back below round-number support — Bitcoin at $29,590 and Ethereum at $1,962.

The big economic number of the day is a minor disappointment: Durable goods orders rose 0.4% in April. If you strip out volatile aircraft and military hardware, the “core capital goods” figure rose 0.3%.

Both were just a hair less than expected. Slowdown, not recession. Not yet, anyway.

After seven straight down weeks for the stock market — only the fourth time that’s happened since World War II — “the market is now severely oversold and there are tremendous opportunities,” says our value-and-dividend maven Zach Scheidt.

“When investors get too pessimistic about the future, stocks are vulnerable to sharp rallies often out of nowhere,” he reminds us.

But you have to be choosy — “quality companies that generate reliable profits. And you get bonus points for buying stocks that pay solid dividends.”

Zach has three names in mind right now. “These companies have legitimate value that will help them hold up even if the market pulls back.”

Yes, we realize Zach parts company with Jim Rickards — who shared his case against AAPL Monday.

As a reminder, we don’t enforce a “company line” around here; we want our editors to share their opinions unfiltered. We respect your intelligence enough to present opposing views and let you reach your own conclusion.

To the mailbag, where we tiptoe back into conspiratorial waters: “Whilst I dust off my tinfoil hat, perhaps someone on your staff could ponder or even perhaps comment on a question I can’t help but ask.

“Has anyone noticed that the growing list of regions that are expected to have the worst food shortages and mass exoduses are also regions of the world where the Western countries have had a traditional difficulty claiming the regions’ resources?

“Everyone knows about oil in the Middle East. Most are not aware of the mineral wealth in regions such as… oh… Afghanistan. (The place is the graveyard of empires for a reason.) There is a whole treasure trove of resources in the entire African continent as well as the stretch through the Middle East all the way to the Indo-Pacific region.

“However, most of these regions are unstable and don’t care much for the West or its corporations and politicians. Corruption hates competition, after all. China has made some inroads, but I suspect long term it may not work as well for them as they might think.

“So how convenient would it be for all these regions to experience some catastrophe such as a mass starvation to destabilize and depopulate entire regions that would leave them open to falling to interests and governments that just happen to be more willing to play ball with the West? Just think about all the wonderful profits — er, um, aid and support that could be rendered to these poor, suffering countries.

The 5: Clearly you’re not the only one thinking along these lines — in light of a meme we ran across this morning… 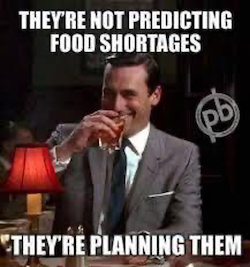 Alas, we’re agnostic as far as it applies to your inquiry — even after the dystopian horrors we’ve documented elsewhere in today’s missive…

More student loan feedback: “Student lending is the worst program the government could be in,” writes a reader who says he’s “retired from a federal regulatory agency that paid off moral hazard losses twice in my career.

“Take a kid who could not qualify for a car loan and give him a student loan. The car loan was at least short and if they couldn’t pay they lost their car. Can’t pay a student loan and the balance grows to ensure you can’t pay.

“I don’t like it, but find some solution to wipe these loans out and get the government out of this business and force the colleges to have some skin in the game.

“Colleges gorged themselves like pigs at a trough with college expenses consistently one of the highest categories of inflation every year.

“The vast majority of student loans are subprime at origination. The government has no business originating subprime loans. As a reminder, if the government creates the moral hazard, they ultimately end up paying.”

“Thank you, Dave, for every single issue of The 5 Min. Forecast you write,” says our final correspondent, writing from Australia

“I love that you are not a fence-sitter and speak fact and not fallacy. Globally, each person (doesn’t matter their beliefs) has been swimming upstream in very muddy, murky waters. During the pandemic (fear and death campaign by false reports) greed, power, control and pride ran rife and resulted in the sinister demise of innocent people.

“Dave, what you sow you also reap — your harvest will be plentiful.”

The 5: That’s perhaps the most effusive praise your editor’s received in years. I thank you kindly, even as I realize it comes with a weighty and ongoing responsibility.