It’s a Bargain Buy (and You’ll Hate It!) 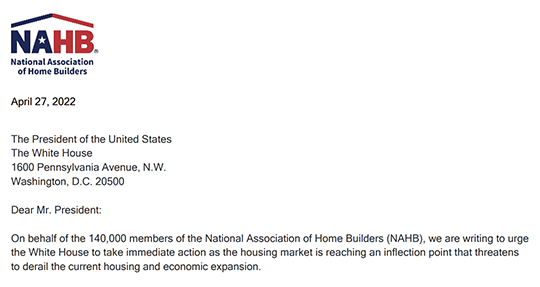 “A shortage of entry-level housing has strong implications for the wealth, health and stability of

Be that as it may, are homebuilders themselves that bad off? Our retirement-and-income specialist Zach Scheidt, for one, avers…

“No one wants to talk about homebuilder stocks,” Zach says. “This area of the market is misunderstood.”

Yes, he concedes: “Homebuilder stocks have two big strikes against them right now…

Add to the equation mortgage rates moving higher… “It’s even harder for the average family to buy a home with a mortgage payment they can afford.

“I admit this sounds dour, and it’s a heavy burden for consumers,” he says. “But that doesn’t necessarily lead to a terrible situation for homebuilder stocks.

“Before you write off homebuilder stocks,” Zach continues, “let’s think about why home prices are rising.

“Today there’s a huge difference between the number of homes for sale and the number of buyers in the market,” he notes. “In short, there simply isn’t enough inventory available.

“People haven’t stopped buying houses… there aren’t enough homes for sale,” says Zach. “Of course, this is good news for the companies that build homes.

“That means homebuilders’ profits are still very reliable. If there are five potential buyers for each home they build, homebuilders turn a great profit.

“Meanwhile, there are some important shifts taking place that very few people are talking about,” Zach says.

“Mortgage rates have started to stabilize and even pull back in some cases. This is because the market anticipates what will happen a year (or even several years) from now,” he says.

“And long-term investors are betting that the Fed will have to cut rates in the next two years as inflation subsides” which makes “homes a tiny bit more affordable.”

And as for supply chain issues, Zach believes they’re untangling. “As builders get their hands on lumber, wiring and shingles, more homes will be completed, keeping prices down and profits locked in.

“While new homes may be expensive now,” Zach adds, “homebuilder stocks are cheaper than I’ve seen in a decade.

“In most cases, these stocks trade for eight, six or in some cases even less than five times expected earnings for the next year,” he says, this for “profitable companies that are in a hot area of the market.

“At the same time, many homebuilder stocks now pay lucrative dividends. So you get paid while you wait for these stocks to trade back up.

“If you want to invest in this unloved area of the market,” says Zach, “you can start by purchasing shares of the iShares U.S. Home Construction ETF (ITB)… a basket of stocks purely tied to building new homes.

“The SPDR S&P Homebuilders ETF (XHB) is also worth considering,” he says. “Just keep in mind this fund includes stocks of companies that are more loosely tied to new homebuyers.

“Both ETFs have begun to rebound recently,” Zach concludes. “And both have a lot of room to move higher as investors start to understand the value of this area of the market.

“Either way, I suggest buying into this area of the market before homebuilder stocks move any higher.”

And for the major economic number of the day, the ISM Manufacturing Index for May clocks in at 56.1. That’s above the 50 dividing line between a growing factory sector and a shrinking one, and a touch higher than April’s 55.4.

Finally, there’s nonsensical gold — hanging out at $1,840.10 per ounce today. Our macro maven Jim Rickards sorts through the nonsense…

“The easiest way to perform paper manipulation is through rigging the futures market. You just wait until a little bit before the close of trading and put in a massive sell order.

“By doing this you scare the other side of the market into lowering their bid price, discouraging investors and hurting sentiment,” Jim adds. “A self-fulfilling momentum is established where selling begets more selling and the price spirals down for no particular reason except that someone wanted it that way.

“But patient investors preserve wealth in the gold market,” Jim reminds us. “For those who flit in and out and occasionally buy rallies and sell dips… you’re probably going to get crushed.”

The Fed is experimenting with shrinking its $8.9 trillion balance sheet. (And what an experiment it is!)

“After doubling in size through asset purchases in the first two years of the pandemic, the balance sheet will be reduced at a pace that’s almost twice as fast as after the last financial crisis,” says Bloomberg.

“While the process officially commences on Wednesday, the first U.S. Treasury securities won’t run off until $15 billion mature on June 15.”

The last time the Fed attempted something similar was in 2017 when the central bank capped sales of U.S. Treasuries and mortgage-backed securities — on a monthly basis — at $50 billion.

This time, “the Fed is capping monthly runoff at $47.5 billion — $30 billion for Treasuries and $17.5 billion for mortgage-backed securities — until September,” Bloomberg says. “Those thresholds will then double to a combined $95 billion.” Nothing to see here…

“Officials say the reduction will work in tandem with interest-rate increases to cool price pressures by tightening financial conditions.”

But even Fed Governor Christopher Waller admitted Monday the Fed is “using a variety of models and assumptions” that are “highly uncertain.”

This ought to end well… banking crisis, anyone? (Dave will have more about that likely consequence sometime this month.)

“Biotech may have finally stopped its slide,” Ray says. The sector is “starting to turn around…

“With some of these companies trading so cheap, I expect we’ll see a number of announcements of big pharmaceutical names acquiring smaller, quality companies,” he says.

“Pharmaceutical companies must replenish their stable of new drugs as existing ones fall off patent and sales drop off a cliff.” Meaning, R&D isn’t enough. “Big Pharma also needs to buy out promising smaller companies.”

Another biotech boost? “The American Society of Clinical Oncology (ASCO) will hold its annual meeting on June 3–7. Usually, dozens of small biotech companies present their findings at the biggest scientific meeting related to cancer,” Ray says.

“ASCO meetings have touched off biotech rallies in the past and triple-digit gains among presenters with compelling new data,” he says. “This year’s meeting could act as a catalyst, shoring up the whole sector.”

Ray’s on the lookout for biotechs with bright futures; we’ll keep you posted…

[For the record] After two months of draconian lockdowns, restrictions in China’s financial hub Shanghai are finally easing.

When the clock struck midnight on Tuesday local time, most of Shanghai’s 25 million residents were free to resume some semblance of normal life… 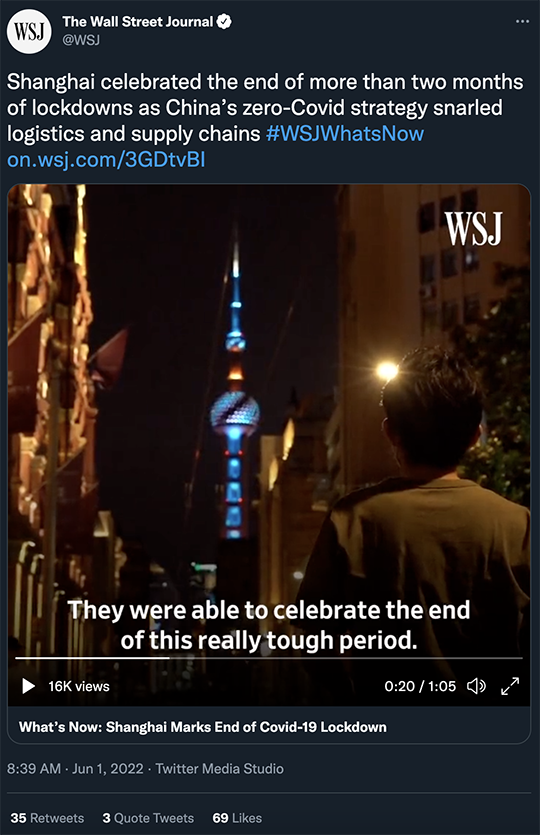 Still, about 650,000 residents remain confined to their homes, and a new COVID tracking system has been put in place, requiring residents “to show a green health code on their smartphone to leave their residential compounds and to enter most places,” says the BBC.

“This day has been hard-won and we need to cherish and protect it, and welcome back the Shanghai we are familiar with and missed,” says Shanghai government spokeswoman Yin Xin. “Everyone has sacrificed a lot,” she concludes.

Not to re-oxygenate the college loan conflagration, but…

During the COVID-19 pandemic — taking full advantage of the federal college loan moratorium — the bulk of qualified borrowers made zero payments. 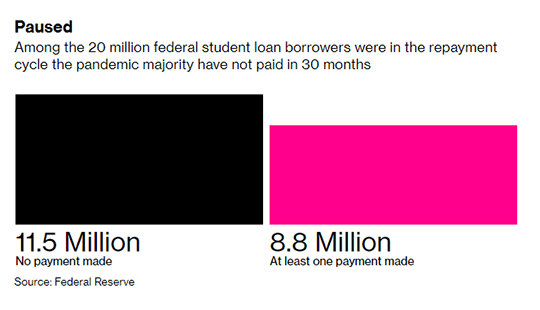 In a Federal Reserve paper published Friday, the central bank asserts that once the freeze is lifted on Aug. 31, many of these borrowers probably won’t resume college loan payments — with an average monthly payment of $260.

“Since the second half of 2021, credit-card balances increased at a faster pace for the group of student-debt holders who made no payment during the pandemic,” Bloomberg reports.

“Delinquency rates on their credit cards, as well as auto and mortgage debts also rose in the second part of the year.”

Our partial takeaway? Millennials were certainly sold a bill of goods… “Get an education,” they said. But with punishing inflation, drained savings accounts and higher-interest mortgages, that college degree is worth less and less every day.

Las Vegas chapels have been told to cease-and-desist from using Elvis Presley’s likeness in weddings.

“Authentic Brands Group… the licensing company that controls the name and image of ‘The King’ is ordering Sin City chapel operators to stop using Elvis in themed ceremonies,” the AP reports.

The Las Vegas’ wedding industry purportedly generates $2 billion annually. “With Elvis so closely tied to [Vegas],” the AP notes, “some say the move could decimate their businesses.” 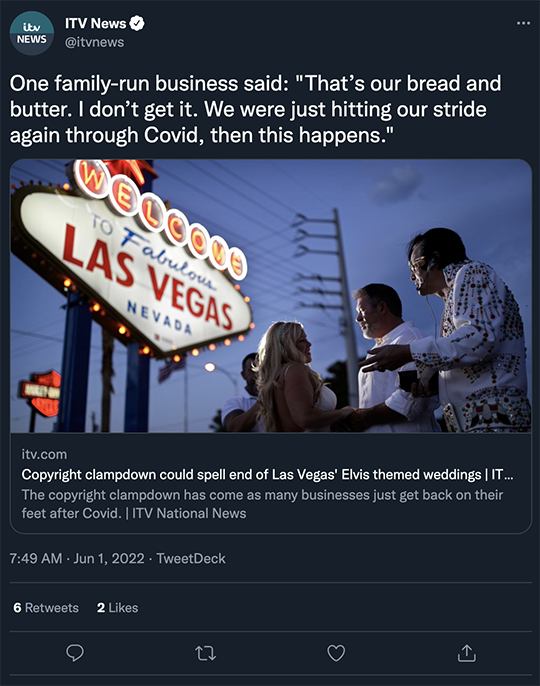 But if you’re concerned about the livelihoods of slick-haired, pelvis-gyrating wannabes, don’t be.

“Elvis-themed stage shows in Las Vegas such as All Shook Up” are protected from licensing agreements “because impersonating someone for live performances such as shows is considered an exception under Nevada’s right of publicity law,” says AP.

So while Elvis impersonators aren’t totally SOL… Las Vegas small-business owners might be.

And on that note, you all take care. We’ll be back at it tomorrow.