At the start of the year, we said the Federal Reserve no longer had the stock market’s back. After yesterday, it’s apparent the Fed no longer has the economy’s back either.

As you’re surely aware by now, the Fed jacked up short-term interest rates by three-quarters of a percentage point yesterday — with another jump of similar magnitude set for six weeks from now. The last time the Fed made such a steep move in one fell swoop was 1994.

That year, 1994, marked the only Fed rate raising-cycle since World War II that didn’t end in recession, sooner or later.

During his press conference yesterday, Fed chair Jerome Powell didn’t exactly exude confidence he and his confreres can pull it off a second time. “It’s not going to be easy,” is how he put it.

For the moment, the Fed is willing to bring on a recession if that’s what it takes to bring inflation under control.

In this regard, the monthly job numbers will be — umm — fascinating to watch going forward. Late last month, a Wall Street Journal Op-Ed published under Joe Biden’s name stated the following:

“If average monthly job creation shifts in the next year from current levels of 500,000 to something closer to 150,000, it will be a sign that we are successfully moving into the next phase of recovery.”

Biden’s minions didn’t pluck that number out of thin air. For a long time, 150,000 new jobs a month has been the bare minimum required to keep pace with population growth.

The next job numbers are due two weeks from tomorrow. We’ll be watching this baseline going forward.

Anything over 150,000 will be a clear signal for the Fed to continue stomping the monetary brake pedal. And even a figure less than 150,000 probably won’t be enough to dissuade the Fed as long as inflation is still raging.

Which is in fact the most likely scenario, one that Wall Street is already sniffing out…

The stock market is back in retreat today — perhaps on the realization that Powell’s “aggressive” rate increases aren’t enough to stuff the inflationary genie back in its bottle.

Behold a chart of the fed funds rate going back to the early 1990s. Looked at in this context, the definition of “aggressive” has been defined downward after years of near-zero rates following the 2008 financial crisis and the 2020 lockdowns. 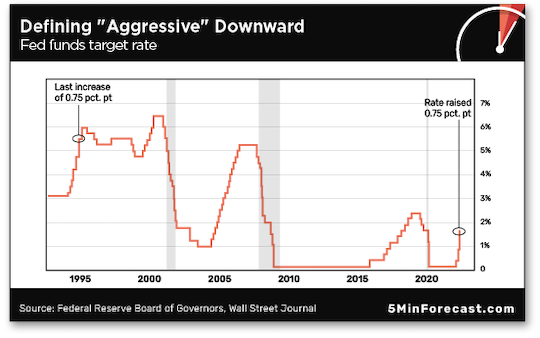 “Real rates are measured by the nominal rate minus inflation,” he explains. “With rates at 1.5% today and inflation at 8.6%, that makes the real rate negative 7.1%.

“Even if inflation comes down to 4% (that’s a big ‘if’), the Fed would still need interest rates of 6% in order to have real rates of positive 2%. That’s still a tall order.

“In other words, every rate hike scenario will cause a recession before inflation comes under control.”

With that reality setting in, the Dow has sunk below 30,000 this morning for the first time in over 18 months.

Yep, yesterday’s post-Fed relief rally of 300 points has turned into an 800-point drop as we write.

For the moment, major cryptos are holding onto round-number support — Bitcoin above $20,000 and Ethereum over $1,000.

The big economic numbers of the day confirm the housing market is turning south — starting with mortgage rates, which just registered the biggest one-week increase since 1987.

A 30-year fixed now goes for 5.78%. The last time mortgage rates were th is high, they were coming the other way — sinking fast amid the 2008 financial crisis.

With mortgage rates already on the rise earlier in the spring, May housing starts came in way less than expected this morning — down 14.4% month-over-month and 3.5% year-over-year.

Permits, a better indicator of future activity, also look terrible — down 7.0% month-over-month and up a mere 0.2% from a year earlier. The rush to build in anticipation of rising mortgage rates? Yeah, that’s over now. 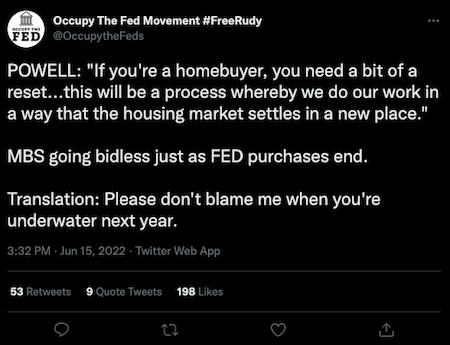 “MBS” is short for mortgage-backed securities. The Fed was buying them hand over fist for two years after the start of the lockdowns. It stopped buying them in March and has now begun the process of selling them — one more way of “tightening” monetary policy to contain inflation.

Problem is, no one’s stepping up to buy.

The only saving grace is that the situation’s worse in Australia and Canada, where central bankers are also trying to curb inflation. From the Calgary Sun: “Nearly one in four homeowners say they will have to sell their home if interest rates go up further, according to a new debt survey from Manulife Bank of Canada.”

Straw in the wind: Foreign buyers want nothing to do with U.S. Treasury debt these days.

“China’s holdings of U.S Treasuries tumbled in April to their lowest since May 2010,” reports the Reuters newswire, citing Treasury Department data. The total is just over $1 trillion.

The article attributes the selling to “Chinese investors likely cutting losses” as rates rise and bond prices fall. That said, “the reduction in Treasury holdings may also have been aimed at diversifying China’s foreign exchange holdings, analysts said.”

You bet it is. In other words, leaders in Beijing saw what happened to Russia’s foreign exchange reserves after the invasion of Ukraine; the United States and the European Union froze about half of those reserves, an unprecedented act of economic warfare.

Chinese leaders don’t care to see the same thing happen to them if they do something that offends leaders in Western capitals.

By the way, China is the No. 2 foreign holder of U.S. Treasury debt. No. 1 Japan is also selling; its $1.22 trillion total holdings are the lowest since January 2020.

The problem for us Americans is that foreigners are backing away from Treasuries at the same time the Federal Reserve is also selling its huge stash of Treasuries — also an inflation-fighting measure.

But if foreigners are selling… and the Fed is selling… who’s going to buy?

We’ll explore that question sometime before the end of this month. Spoiler alert: You’re not going to like the answer…

Natural gas prices are down big this week thanks to — of all things — a supply shock.

A week ago yesterday, an explosion ripped through a liquefied natural gas terminal on the Texas Gulf Coast. No one was hurt, but the resulting fire knocked the plant out of commission. The operator, Freeport LNG, says it won’t be fully up and running again until late this year.

Result: A whole lot of natgas that was destined for foreign customers will be stranded in the United States for a while. By one estimate, about 2% of demand for U.S. gas just went bye-bye.

That said, gas prices are still nearly double what they were at the start of the year.

To the mailbag, where a reader regales us with “another crazy story about Communist China.”

“In 1958, President Mao launched a campaign to exterminate sparrows, accusing them of eating too much grain.

“Brought to the brink of extinction, sparrows stopped eating grain… but also locusts and other pests. Locusts swarmed the country, contributing to the Great Chinese Famine of 1959–1961. As for Chinese cities, they were invaded by zillions of flies that found life very enjoyable indeed in the absence of a major predator. Two hundred fifty thousand sparrows were finally imported from the Soviet Union to replenish their population.

“This is a good definition of communism: What was once plentiful becomes a rarity and finally has to be imported.”

The 5: Between China’s reversion to Maoism under Xi Jinping… and its demographic death spiral (by one estimate, the 2020 population will be cut in half by 2050)… we’re just not that worried about China as a “rising power.”

To the mailbag, where a couple of readers weigh in on mainstream economists and their predictions…

“President Truman famously asked to be sent a one-armed economist, having grown tired of hearing ‘On the one hand, this’ and ‘On the other hand, that.’”

Says another: “I have often thought political types should be servers in an outlaw biker bar for six months. If they live they will definitely understand reality.”

The 5: Hmmm… Maybe they’d end up with one arm that way?