We were at least seven years premature in declaring 2015 would be “the year faith was lost in central bankers”… but here at The 5, hope springs eternal.

In light of the stock market’s spill after we went to virtual press yesterday, we’re going to pause the rollout of our editors’ 2022 predictions for a day… and take a step back.

Yesterday afternoon, the Fed released the minutes from its meeting that took place three weeks earlier, on Dec. 14–15.

There was precious little that we didn’t know already: The Fed accelerated its timetable for “tapering” its bond purchases — planning to wrap up the process by March.

Three weeks ago, this step fueled a widespread expectation that the Fed would raise its benchmark fed funds rate three times in 2022 — from near zero now to a little over 0.75% by year’s end.

The only thing that changed was this: The minutes suggested that Fed pooh-bahs are looking to pull the trigger on the first interest rate increase in mid-March, as soon as tapering is over. Up to now the expectation was the rate-raising cycle wouldn’t start till June.

The accelerated timetable by itself shouldn’t have caused the market to fall out of bed.

Rather, we suspect it’s Mr. Market’s sense that he got blindsided.

It’s at this moment we remind you again that Fed “minutes” are not like the minutes of your local school board meetings. They’re not an objective record of who said what. They’re a political document aimed at telegraphing a “message” to the markets.

It’s also at this moment we declare that all the Fed’s efforts at “transparency” in recent years — for instance, the chairman holding press conferences four times a year starting in 2011, which increased to eight times in 2018 — are bogus. Contrived. Monetary theater.

Indeed, the key moment in Powell’s presser was an assurance that he’s got the stock market’s back and he wouldn’t be too aggressive in tightening policy.

The day after, we spent part of our 5 Mins. imagining the internal dialogue in Powell’s head. We noticed he betrayed a lack of confidence in that assurance, even if few others did. 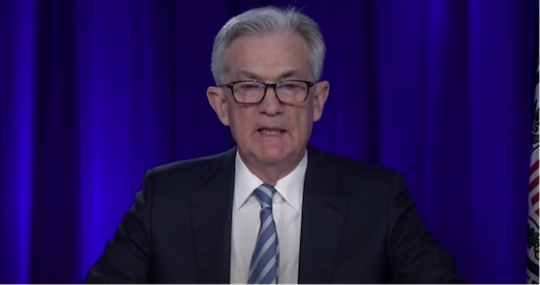 Now, with the benefit of hindsight, we know why he was feeling conflicted.

Yesterday, reality hit: After more than three decades, it’s possible the Fed no longer has the stock market’s back.

It’s not written down anywhere… but ever since Alan Greenspan’s appointment in 1987, Fed chairs have viewed “rising stock values” as part of their mandate along with “stable prices” and “maximum sustainable employment.”

This may — and we emphasize may — no longer be the case.

“The Fed can no longer print money whenever the economy/markets falter,” Bianco Research chief Jim Bianco tweeted yesterday. “Now they must decide to prop up stocks or tame inflation. Successfully doing both seems unlikely.”

In other words, the Fed can no longer keep supplying monetary heroin to Wall Street without risking consumer price inflation spiraling out of control.

Now is the first time since Jimmy Carter appointed Paul Volcker Fed chair in 1979 that a U.S. president is leaning on the Fed to get inflation under control.

A month ago, polling data showed inflation was the top concern among voters — even more than the virus. If the Fed doesn’t get a handle on inflation, Democrats are set to get clobbered in the 2022 midterms.

Under that circumstance, the White House is willing to sacrifice the stock market if it means keeping working-class voters — the ones most vulnerable to rising prices — from abandoning the donkey party en masse.

And now, it appears the Powell Fed is willing to play along.

The Fed minutes broke the news as gently as possible — again, they’re crafted specifically to “send a message” — but the stock market took a wicked tumble anyway.

Between the suspicion the Fed no longer has the market’s back… and the certainty that Powell wasn’t being fully candid three weeks ago… the Nasdaq tanked 3.3% yesterday.

But bonds continue to sell off, pushing yields up. The yield on a 10-year Treasury note sits at 1.74% — very near its highs last March.

Precious metals and crypto have offered no refuge from the stock selling. Gold is back below $1,800, silver threatens to crack below $22, Bitcoin is below $43,000 and Ethereum below $3,400.

Also weighing on the stock market, we suspect, is a phenomenon we alluded to on Monday.

In recent days, the White House and the CDC have tried to downplay the threat of the Omigod variant so as not to tank the economy completely — again, with an eye toward the 2022 midterms.

But the reality is we’re now a year into mass vaccination and nothing approximating “normal” — be it “new” or otherwise — is in sight.

Millions of workers are testing positive, and whether they’re symptomatic or not, they can’t report to in-person jobs. It’s not just airlines.

Millions of American schoolkids aren’t in school this week, most banks have (again) postponed their back-to-the-office plans and the NFL is figuring out a backup if the Super Bowl can’t be held in restriction-happy California.

None of this bodes well for economic growth, and there’s still some connection, however tenuous, between the stock market and the economy.

And if the Fed is serious about withdrawing its monetary heroin? That connection will become progressively stronger.

“Majority of Business Leaders Believe Democracy Is Threatened: Poll,” says a headline at The Hill.

As you’re likely aware, because the media insist on reminding you, today is the first anniversary of the Capitol riot.

We devoted all of The 5 to the subject the day after. Wasn’t one of our best single-topic issues, but we daresay most of what we wrote has held up well. Not only did the Dow improbably rally to a record while the chaos was livestreamed that day… it’s risen another 5,000-plus points since, even accounting for this week’s tumble.

And our suggestion that much of the crowd’s frustrations had economic origins? By one estimate last spring, nearly 60% of people facing charges for the riot have some history of money trouble — foreclosure, bad debts, back taxes.

The new poll of 400 business leaders, meanwhile, finds 77% supporting Democrats’ efforts to either “expand voting access” or “make voting fraud easier,” depending on your point of view.

Here too we’re not especially surprised. Last spring we explored how (by and large) corporate America sees it in their own self-interest to co-opt social justice causes.

One final thought, admittedly off the business beat, but highly relevant to the state of the media: It’s no longer possible to dismiss the notion that the riot was concocted by the feds. Not after the thorough reporting done by Darren Beattie and colleagues at Revolver.news in recent months. This is as good a place to start as any.

The articles are deeply researched — while scrupulous about not jumping to conclusions. If you know anything about the feds’ long history of infiltrating everyone from the Black Panthers to the KKK, you won’t be surprised. But the details are such that you’ll still be shocked.

Stupid corporate publicity tricks: “BTCS Inc.” says a press release, “a blockchain technology-focused company, has announced the first-ever dividend payable in Bitcoin by a Nasdaq-listed company, which the company refers to as a Bividend.”

The announcement two days ago was good for an instant 53% bump in BTCS’ share price — an increase that’s had staying power, at least so far.

But truly, there’s so much less than meets the eye here. You know how some NFL players are now getting “paid in Bitcoin”? No, they’re not — they’re paid in plain ol’ fiat dollars, which they then convert to Bitcoin (often on an exchange that’s paying them for an endorsement deal).

BTCS can’t actually pay its “Bividend” — my God, that’s atrocious — in Bitcoin because many brokerages still want nothing to do with cryptocurrencies.

Bloomberg columnist Matt Levine elaborates: BTCS’ dividend “is 5 cents a share, payable in dollars in the regular way. You can get it in Bitcoin, but you have to opt in, and open your own Bitcoin wallet, and, crucially, transfer your shares to be held in your own name with BTCS’ transfer agent, so that your broker doesn’t have to worry about passing Bitcoins along to you.”

Sounds complicated. Wouldn’t it be easier to just directly invest in crypto?

[Ed. note: If you’re a rank beginner and still have no idea where to start, we heartily recommend our Big Book of Crypto — written just with you in mind by our resident experts James Altucher and Chris Campbell. Get your physical and/or digital copy right here.]

To the mailbag, and more unfinished business from our “best of 2021” editions last week.

We heard from one of our regulars who was struck by the Venn diagram shown in this episode of The 5.

“If ‘money is the mother’s milk of politics’,” he writes, “the Citizens United Supreme Court decision from 2010 has transmuted it into a ‘poison.’

“Of all the proposals proffered for preventing America’s demise — term limits, ranked balloting, gun rights, etc. — nothing will suffice unless we voters can prevail upon both state and federal legislators to draft constitutional amendments to outlaw private campaign ‘bribes’ in favor of public campaign financing with appropriate limits.

“Sure, this will cost the taxpayer, but not nearly as much as we are paying now. Legislators should be discussing, debating and legislating in the people’s interest, not expending energy on raising money for their political campaigns and indebting themselves to the moneyed interests.”

The 5: Your intentions are noble, but we have trouble seeing how public campaign financing will get us from here to there.

“Getting money out of politics” isn’t nearly as important a goal as “radically shrinking the scope of government.” Do that and powerful institutions will have far less reason to try to influence elections — because there just won’t be that much within government’s powers that would be worth those institutions’ millions.

Yeah, we know, dream on.

But we’re still skeptical. We’re hard-pressed to think of any country where public campaign financing has made a huge difference for the better…