The bear market of 2022 might be over already… but realistically, the odds are greater than 50-50 it won’t be over until next year.

Which brings us to the following chart. Perhaps you’ve run across some version of it in recent days during your online wanderings. The bold line depicts the current bear market, relative to bear markets of the past. Click to enlarge if you like, but just a glance gives you the gist…

Well, read on for some insight you won’t run across elsewhere…

Start with this: The S&P 500 is “on course to record its worst performance for the first six months of a year since 1970,” says the Financial Times.

In June 1970, the economy had been mired in recession for six months… while the already-broken-up Beatles topped the charts with “The Long and Winding Road” and pitcher Jim Bouton scandalized baseball with his tell-all book Ball Four.

Ironically, however, the bear market of 1970 was over by then; the market put in a bottom around Memorial Day.

A similar bear now? It wouldn’t be over for another year… and by that time the S&P would grind down another 18%.

Of course, there’s no guarantee of a repeat performance.

And so we press on, examining other bear markets of the past…

Those are the definitions of a senior analyst at our firm, Jonathan Rodriguez. They’re admittedly arbitrary, but still helpful. A “fast” bear market is over within six months, and a “slow” one takes longer than six months to play out.

Seeing as we’re right at the six-month mark since the 2022 bear began… where might we go from here?

Jonathan sent me a spreadsheet with all of them yesterday — just in case you feel like checking his work. Note that with the percent losses, you need to move the decimal place over — so, for instance, the 2020 corona-crash was in fact 34%.

It’s entirely within the realm of possibility the current bear will prove to be “fast” — in which case the S&P bottomed two weeks ago today at 3,667.

On the other hand… with the other 13 bear markets being “slow”… you’re looking at a 62% probability the current bear will be likewise “slow.”

Here again, you can see the history for yourself if you like…

Of the 13 “slow” bear markets, the typical length runs to 16 months. And the typical decline is about 40%.

So while the current bear market might be already over… the greater likelihood is that it will drag on into the spring of next year and take the S&P 500 down from 3,751 today to — eek — 2,878.

And if you want to split the difference, including the average of both “slow” and “fast” bear markets… the current bear won’t be over until this Thanksgiving and will take the S&P down to 3,022.

Again, we’re just playing with averages here. But by now you get the idea: All else being equal, the worst is yet to come.

And no matter what happens… there’s one category of stocks you absolutely want to make sure is not in your portfolio right now.

It’s a “kill list” of 153 names compiled by our Jim Rickards — stocks he says you should sell right now before it’s too late. You can see all the names and tickers as soon as you follow this link — along with Jim’s comprehensive case for why they’re in trouble.

As for today’s stock market action? Not pretty — likely because of economic numbers that point to 1970s-style “stagflation.”

The Commerce Department regaled us this morning with the May “income and spend” numbers. The highlights…

Speaking of inflation, we can’t help but pass along the following meme.

The top part is from an actual infographic the White House put out last year. The bottom part is clever photoshoppery. But both of those figures do come from the American Farm Bureau Federation… 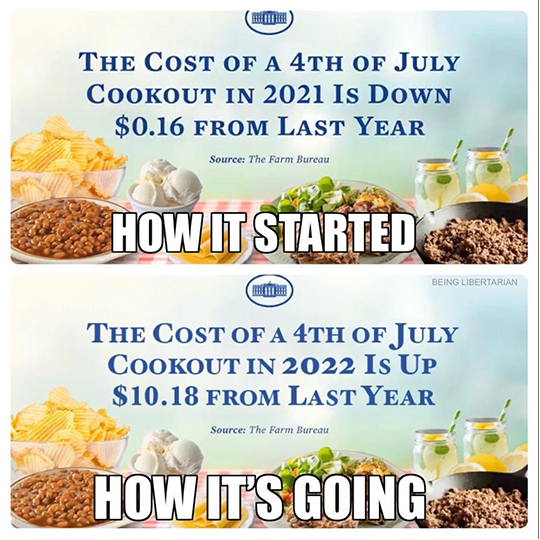 That’s a 17% increase year over year — especially devastating because as we often point out at Thanksgiving, the Farm Bureau always lowballs these holiday-meal numbers with the lowest-quality eats possible. Two pounds of ground beef for $11.12? Only from feedlot cattle given GMO corn.

Anyway, the stock market is tanking on this final day of the first half.

Cryptos are (once again) acting just like stocks and selling off. Bitcoin is barely holding onto $19,000 and Ethereum is just over $1,000.

Sinking stocks translate to a rally in bonds, with the yield on a 10-year Treasury note a hair over 3%.

Sooner or later, the doomed-to-fail sanctions targeting Russian gold will be a plus for the dollar price of gold.

“Russian gold will not sit idle. The Central Bank of Russia will buy some themselves from Russian miners as part of its abandonment of U.S. dollar-denominated assets. Other willing buyers include China, India and other Asia powers who have remained neutral in the sanctions war.

“The Russian gold will find a good home at world prices. Meanwhile, the cutoff of Russian gold to retail buyers in Europe and the U.S. will put a modest floor under prices.”

Maybe even more than a modest floor, in the assessment of this fund manager… 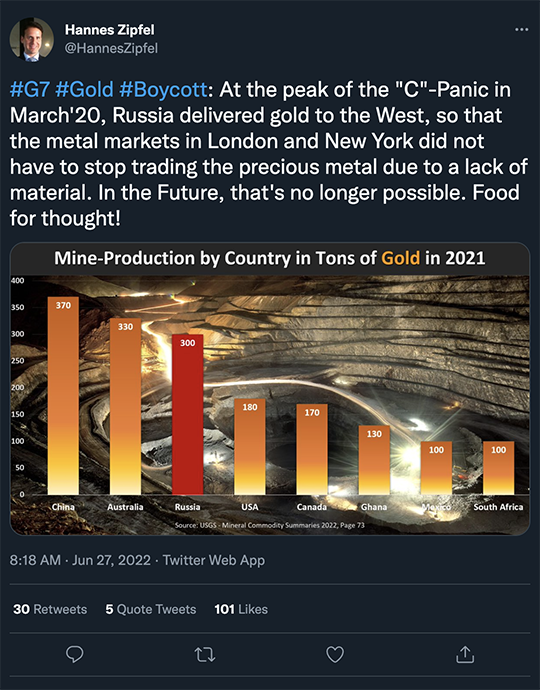 You might recall physical gold was hard to come by during the corona-panic of spring 2020. Russian exports helped alleviate that squeeze for Western buyers… but that door is now closed in the event of a new panic into real metal.

Best stock up now if your stash still isn’t sufficient. Jim Rickards recommends 10% of your portfolio in physical gold — not ETFs or any other paper substitutes. Our friends at Hard Assets Alliance have a wholesaler network that’s second-to-none in meeting the needs of retail customers like you — the metal you want, when you want it, at premiums that are among the lowest in the business.

Click here to get started. As always, the usual disclaimer applies: Our firm owns a piece of Hard Assets Alliance, so we’ll collect a small cut once you fund your account. But we wouldn’t have made that investment unless we had total confidence the folks there will do right by you.

Staying with precious metals, we have a pretty good dumb-criminal story.

A cargo handler at Los Angeles International Airport has just been sentenced to a year in prison for lifting four gold bars from a shipment en route to New York. Marlon Moody, 39, was charged with conspiracy to commit theft of an interstate or foreign shipment.

The background, from KTLA-TV: “On April 22, 2020, a shipment of gold bars arrived at LAX on Singapore Airlines. It was destined for a Canadian bank in New York. The shipment had a total of 2,000 gold bars, each weighing one kilogram and valued at around $56,000. But after the stopover at LAX, an inventory check that evening showed one box containing 25 gold bars was missing.”

The box turned up on airport grounds later in the day — with four of the 25 bars missing.

Moody had made off with them, linking up with a fellow cargo handler — in a company vehicle. Moody gave him one of the bars, gave another to a relative and buried the other two in his yard.

The FBI cracked the case within two weeks; the accomplice has already done a four-month sentence.

“I have no problem with the desire to reduce oil use long term, especially burning it for fuel when it is so crucial to the petrochemical industry in general,” a reader writes — picking up where he left off in yesterday’s edition.

“But the idea of doing it all at once smacks of either foolishness or someone with a dog named ‘Portfolio’ in the fight.

“We were already on the right course with hybrid cars that are the perfect way to provide the time and new tech necessary to gradually develop electric car systems and eventually the batteries. Energy storage and smoothing is the weak link in all the electric generation efforts as well as alternative energy generation.

“A better form of hybrid vehicles than electric is hydraulic, which requires no special materials because the ‘battery’ is a container of pressurized nitrogen. Hydraulic hybrids are not the subject of my email, but they already exist and can be researched elsewhere.

“So the question is why all-electric?

“And why does the Biden White House insist on plug-in electrics, as Elon Musk recently revealed that Biden wanted his help with? And why are Western states suddenly making war on hydroelectric power when it continues to be the most cost-effective producer of electricity? Why are we trying to close down pipelines, which have no record of environmental damage, when they are strategic infrastructure?.

“Once we have destroyed our hard-won infrastructure, getting it back will be nearly impossible. Or is that the intention? There is no shortage of oil, there are only artificial obstructions to supply.

“By the way, the reason no new major refineries have been built since the 1970s is simply due to increases in productivity. We overcapacitized during the years when car engines burned (and wasted) too much fuel. Fuel economy improvements and better refining and blending have been the difference.”

The 5: We suspect hostility toward hydropower in the Western states — heretofore the source of the cheapest electricity in the country — has something to do with the meager rainfall/snowpack of recent years.

Whether that’s the result of “climate change” or just an unusual dry spell… the system simply wasn’t built to accommodate a population that’s exploded since Hoover Dam’s completion in 1936. Heck, Arizona’s population has grown 10-fold since World War II…

Anyway, thanks for your input the last couple of days. Like it or not, the 2020s will be the decade of scarce and costly energy — however we come out on the other side of it.

P.S. We got several great questions and comments yesterday in response to Jim Rickards’ pointed take on a central bank digital currency — or as he labels the U.S. version, “Biden Bucks.”

We’re going to send those queries on to Jim and bring you his replies sometime after the long weekend.